The idea that light can lead to observable mechanical effects on material objects dates back to the 1600s when Johannes Kepler suggested in De Cometis that deflection of comet tails was the result of radiant pressure from the sun. As descriptions of light, and more generally the electromagnetic field, were refined over time, first by Maxwell's equations and later quantum theory, the notion of the mechanism by which light exhibits mechanical forces similarly evolved. It wasn't until the late 1960s and early 1970s that the researchers Vladilen S. Letokhov1 and Arthur Ashkin2 suggested optical forces could be used to trap and manipulate neutral atoms and later dielectric crystals.

The work of Ashkin and Letokhov laid the groundwork for numerous breakthroughs leveraging optical forces. In the biological sciences ‘optical tweezers’ have revolutionized how we can measure forces and interrogate biological matter.3, 4 In atomic physics, optical forces have enabled laser cooling of atomic beams5 and eventually single atoms and ions,6,7 which has resulted in experiments that address foundational questions on the control and measurement of single microscopic quantum systems. The importance of optical forces in the optical sciences cannot be overstated and is evidenced by the Nobel Prizes awarded to this theme, in 1989 (ion trapping), 1997 (atomic trapping), 2001 (Bose-Einstein condensation), and 2012 (trapping of photons and ions).

During the last decade there has been a renewed interest in the optical control of mechanical systems. Potential applications are the observation of quantum effects in ever-larger objects as well as the development of ultra-sensitive force sensors. The optomechanical coupling of a wide range of mechanical resonators—ranging from bridges and cantilevers to microtoroids—with lasers have been studied.8, 9 In contrast to all the previous work focusing on mechanical resonators clamped to a support substrate, our approach to nano-optomechanics exploits the mechanical forces exerted on dielectric objects by tightly focused lasers.

We have worked with Mark Raizen's group at the University of Texas10 and Lukas Novotny's group at the Swiss Federal Institute of Technology Zurich (ETH-Zürich), Switzerland,11 to build on initial work by them and and Romain Quidant's group at the Institute of Photonic Sciences (ICFO) in Barcelona, Spain,11 to trap single diamond nanocrystals.12 Figure 1(a) presents an image of a single diamond nanocrystal levitated in our free-space optical dipole trap by a 1064nm laser. Physically, the dielectric particle seeks to find the location where the optical field is the greatest, that is, at the focus of the high numerical aperture objective. Once the crystal is trapped, we introduce a second green laser beam, which is responsible for the appearance of the particle in Figure 1(a). 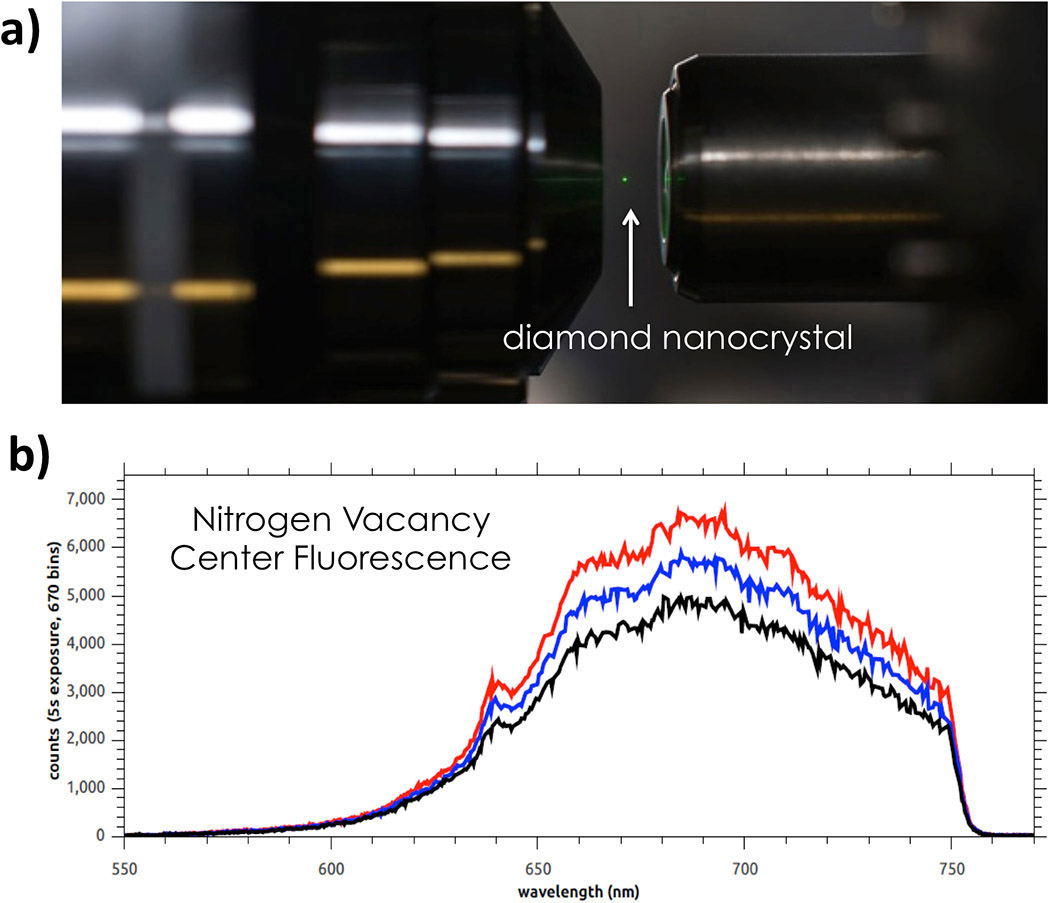 Our interest in diamond nanocrystals stems from the fact that they contain native defects in their crystal structure—nitrogen vacancy centers (NV center)—that support optical transitions linked to the spin orientation of electrons associated with the defect. In order to interrogate these internal quantum states, we can use a second laser once the crystal is levitated in the dipole trap. In our case, the same green laser that makes the diamond crystal visible to the eye also serves to excite red fluorescence from the defect. Figure 1(b) shows an exemplary fluorescence spectrum from the diamond nanocrystal's internal defect center as the trap laser strength is varied.

In the future, we plan to use these nano-optomechanical resonators to create Schrödinger Cat states (superpositions of macroscopic systems). A second direction of interest is to exploit the resonators for force metrology. For example, we are devising approaches to measure feeble Casimir forces that can exist between dielectric and metallic objects as well as how friction impacts nanoscale motion.13

Levi Neukirch is a PhD candidate in the Department of Physics and Astronomy at the University of Rochester in Western New York. He received his undergraduate degree in physics from the University of Nebraska. Levi currently works on an optical tweezers project, trapping and cooling nanoparticles for use in quantum optics and optomechanical experiments.

Nick Vamivakas studied Electrical Engineering at Boston University and received his PhD in 2007. From 2007 to 2011, he was a post-doc in the Cavendish Laboratory at the University of Cambridge, UK. Nick joined the Institute of Optics in 2011 and currently is an assistant professor.