The relatively high efficiency of solar cells based on silicon (Si) has led them to dominate the solar cell industry for the past few decades.1 Photon management strategies have been developed for more efficient photovoltaic devices. Moreover, it is known that only a small portion of the sunlight can be efficiently used due to reflection at the device surface, especially at high incident angles. On cloudy days, most of the light is diffused or scattered on passing through the atmosphere. It has been reported that for a polished Si surface, nearly 40% of light is reflected when averaged over all angles of incidence and the solar spectrum (400–1100nm).2 To address this, sun-tracking systems have been integrated with solar panels to increase the proportion of direct sunlight, yet this reduces cost-effectiveness.

Hierarchical structures involving both microstructures and nanostructures are a cost-effective way to enhance the performance of solar cells by improving both electrical and optical properties.3–7 Light-harvesting characteristics become more prominent, broadband, and especially more omnidirectional, and the actual junction area is also increased. Some hierarchical structures have been reported to exhibit unique interfacial properties such as super-hydrophobicity.3 Engineering the structures benefits solar energy devices by, for example, making surfaces self-cleaning for better environmental endurance and reducing sensitivity to the angle of incident photons to maximize light harvesting without solar tracking systems. 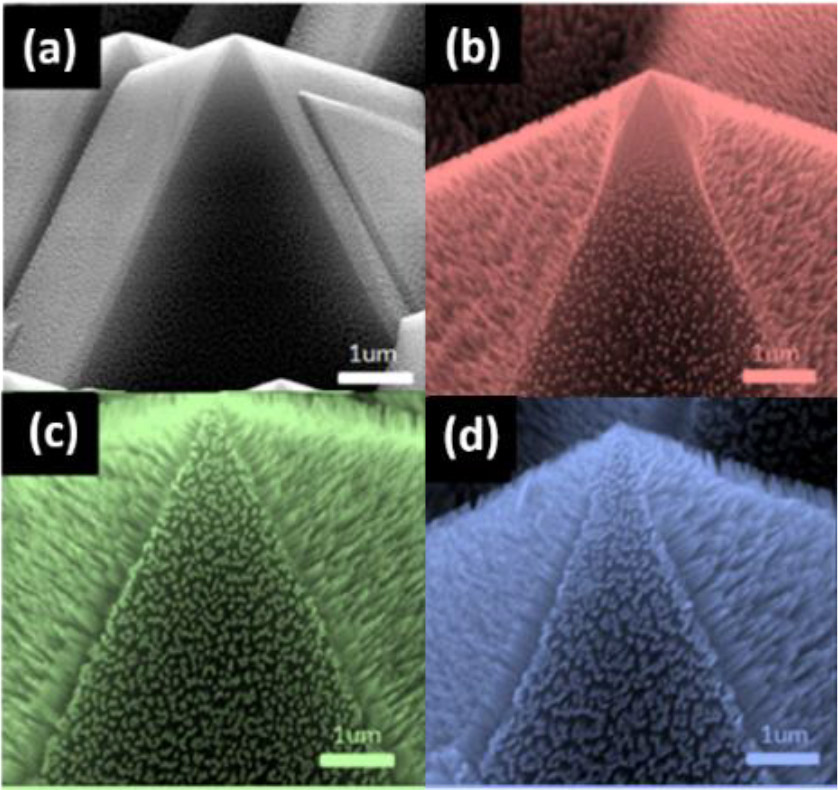 Recently, we demonstrated hierarchical structures for high-efficiency Si heterojunction (SHJ) solar cells.4, 5 These solar cells have achieved efficiencies of 11.48% (with the transparent conductive polymer known as PEDOT:PSS) and 15.14% (with amorphous Si). We first fabricated micropyramid arrays on Si substrates via an electrodeless chemical etching process. A metal-assisted etching process then formed nanowires on the micropyramid surface. The length of the nanowire can be controlled by the etching time to achieve desired device performance: see Figure 1. The hierarchical structures engineered at the interface of the junction provide multiple benefits, including suppressing undesired surface reflection, increasing junction area for more efficient carrier collection, and especially omnidirectional light-harvesting ability. However, we also note that increasing nanowire length usually induces defects or trapping centers at the junction interface, which may lead to severe recombination loss and shortened carrier lifetime. This trade-off between light trapping, junction area, and carrier lifetime means that there are optimal lengths of nanowire for both PEDOT:PSS and amorphous Si solar cells.

One of the most impressive properties in hierarchical structures is the ability to collect sunlight from all directions. Compared with planar devices, giant enhancement of generated power densities has been observed in SHJ cells at high incident angles (253.8% for SHJ cells with PEDOT:PSS and 83.5% for SHJ cells with amorphous Si for an incident angle of 75°), resulting in 72.2% (PEDOT:PSS) and 44.2% (amorphous Si) enhancement in averaged daily power generated, respectively: see Figure 2. The significant omnidirectional light-harvesting potential in hierarchical cells is an inexpensive alternative to expensive solar tracking devices for cost-effective solar panels.

In summary, hierarchical structures have been successfully adopted into various types of Si-based solar cells to improve performance. As our next step, in addition to further optimizing performance in Si-based devices, we are applying hierarchical structures to non-Si devices such as those based on gallium nitride. The excellent broadband, increased junction area, and omnidirectional properties of such structures hold promise for developing high-efficiency, cost-effective, and omnidirectional devices for practical applications.

Jr-Hau He is an associate professor at the Institute of Photonics and Optoelectronics and the Department of Electrical Engineering. His work focuses on the design of new nanostructured architectures for nanophotonics and the next generation of nanodevices, including photovoltaics and resistive random-access memory.