Many electronic appliances, including TVs, PC monitors, smartphones, and medical x-ray imagers, use thin film silicon devices in their electronic circuitry. Silicon transistors control image pixels on a display panel by turning them on or off. X-ray photons, when converted into visible light, can be detected by thin-film photodiodes on an imager panel. The material most widely used for these applications is amorphous silicon, which is resilient to high-energy radiation, is low in cost, and is scalable to large areas.1 LCD displays, measuring tens of inches in diagonal, are a commonplace example.

However, despite its merits, amorphous silicon also has several drawbacks. For example, electron velocity in the material is quite low, due to the large number of defects that form as silicon is grown. This results in a smaller current. Consequently, large transistors and/or voltages are needed to properly operate the image pixels. Large transistors occupy a wide pixel footprint, making it challenging to obtain high resolutions.2 Greater voltages lead to high power consumption and also fast battery drain in mobile applications. In addition, defects also lead to a phenomenon known as persistent photoconductivity, which leads to an amorphous silicon photodetector continuing to conduct for some time, even after the incident light is turned off.1 This results in slow device operation and reduced overall image acquisition speed.

Alternative materials for electronic and optoelectronic devices include transition metal dichalcogenides (TMD), such as molybdenum disulfide (MoS2).3, 4 These are inherently two dimensional, enabling the isolation of individual layers.5 Experimental transistors made of MoS2 show electron mobility of several tens of cm2/Vs and higher,3–5 which is much greater than in amorphous silicon (∼1cm2/Vs). Greater mobility means higher velocity and a larger current. Moreover, a single layer of material is desirable if the transistor channel requires transparency and mechanical flexibility. Furthermore, the inherent 2D nature of MoS2 enables its use in novel heterostructures because the lack of chemical bonding at interfaces makes it relatively low in defects.6 Recently, we showed how amorphous silicon forms a heterojunction diode, much like a p-n junction, for use as a photodetector: see Figure 1(a) and (b).7 When light falls on this diode, absorption occurs within the amorphous silicon, and the MoS2 collects some photogenerated electrons: see Figure 1(c). The strong electron carrier mobility of the MoS2 enhances the photodetector operation speed. We found that the transient photoresponse of this heterostructure diode is about 10 times faster than that of the conventional amorphous silicon device. 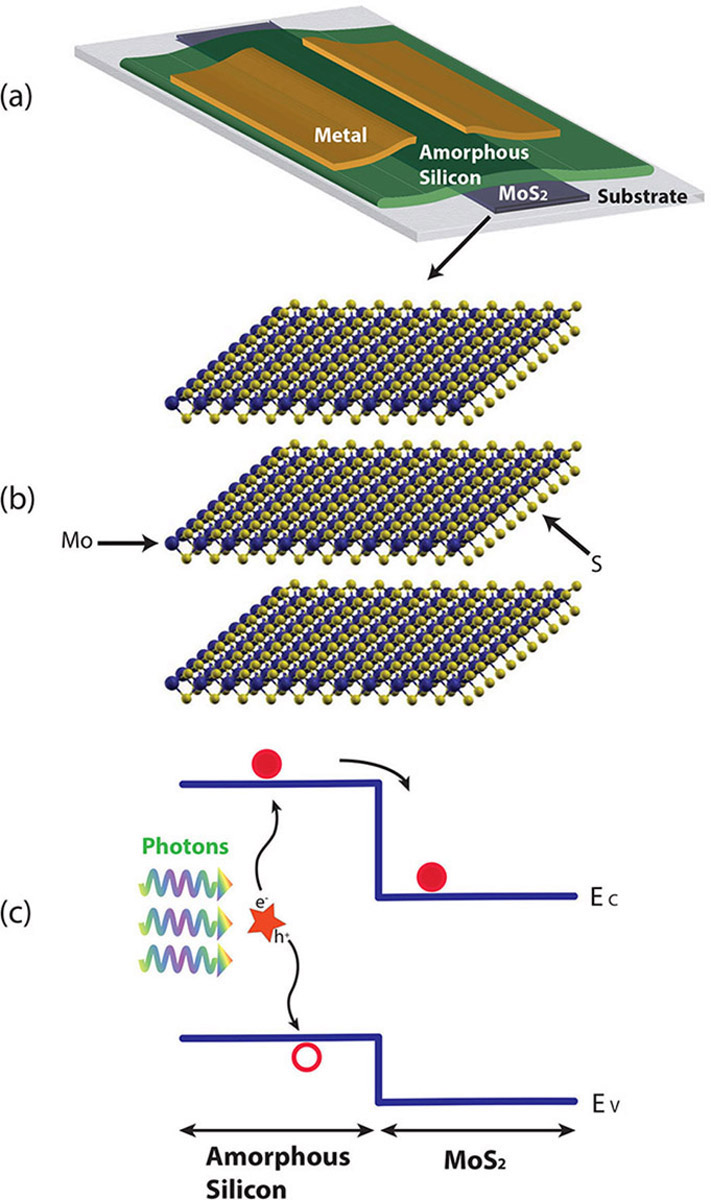 Figure 1. The structure and operation of a molybdenum disulfide (MoS2) amorphous silicon heterojunction photodetector. (a) Schematic. (b) MoS2 material structure. (c) Energy band diagram. The light is incident from the top. Optical absorption occurs in the silicon, and photogenerated electrons diffuse to the underlying MoS2 layer and are transferred toward a metal contact. (Part b was provided by K. Ganapathi of UC Berkeley).

Our approach could be used for biomedical imaging applications where a fast response is critical. For example, a rapid imager could reduce the duration of a patient's x-ray exposure. For our method to be applied in an industrial setting, there needs to be development of large-area growth processes, such as chemical or physical vapor deposition, or layer transfer techniques. Future work will focus on meeting these requirements, and several developers are already working toward that goal.8, 9 The capacity to deposit these materials at relatively low temperatures would enable the use of low-cost substrates such as glass and plastic.

Mohammad R. Esmaeili-Rad is a postdoctoral fellow in the department of electrical engineering and computer sciences.

Sayeef Salahuddin is an assistant professor of electrical and computer engineering.