Mid-IR lasers—which operate at wavelengths of 3–20μm—are used in a wide range of applications such as remote sensing,1 pollutant monitoring,2 laser-based countermeasures, and narcotics or explosives detection.3 However, the availability of such lasers is limited. Devices operating at wavelengths longer than 1.8μm are not widely tunable nor do they exhibit the narrow linewidths needed for advanced applications such as spectroscopy. Adjustable sources like thulium-doped fiber lasers and optical parametric oscillators (OPOs)—which convert a single input laser to two output beams at lower frequencies—have not yet emerged.

So far, OPOs are the leading candidate for mid-IR laser sources but frequency adjustments are limited and require temperature or angular tuning, making their design sensitive to mechanical vibrations. More recently, quantum cascade lasers (QCLs) have surfaced, which are based on microstructured semiconductor lasers. Extensive development effort has led to relatively high power with room-temperature operation. However, the tunability of a single unit is still constrained. Moreover, the design of a widely tunable source requires the combination of many single devices, resulting in a fairly complex optical integration. The ideal mid-IR source for spectroscopic applications needs to be mechanically robust, stable during temperature fluctuations, and tunable over a broad spectral range.

Our solution is based on difference frequency generation (DFG), a nonlinear process that involves combining two photons of different energies to produce a third photon whose energy equals the difference between those of the incident photons: see Figure 1. By applying the DFG process to the pulses of a commercially available picosecond synchronized laser (SL), we can obtain a tunable mid-IR source with fairly good spectral resolution (<1cm−1). 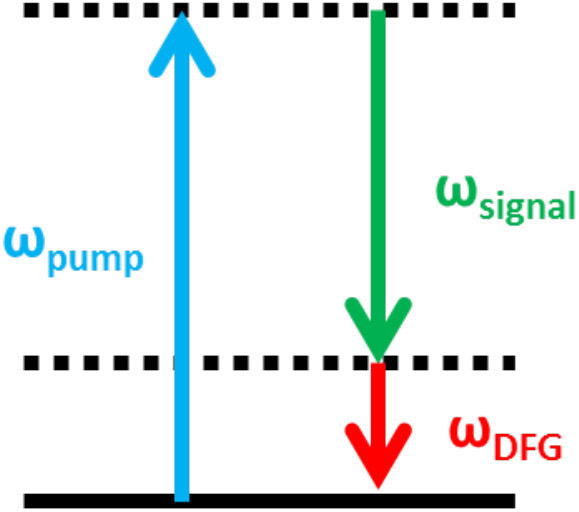 Our SL system (see Figure 2) consists of two fiber-based laser sources.4 The first source is a picosecond programmable laser (PL) whose emitted wavelength can be tuned continuously and rapidly at up to 80,000 different wavelengths per second. The main features of the PL come from the combination of a dispersive element inside the laser cavity and an electro-optic modulator (EOM) acting as an active mode-locker. Since the laser cavity length is different for each wavelength, fast tuning is achieved by changing the driving frequency of the EOM. The second part of the SL is composed of a picosecond master oscillator power amplifier (MOPA) electronically synchronized to the PL, regardless of the wavelength at which it is being operated. Also, since the SL is electronically controlled, many intrinsic features can be exploited, such as phase dithering, rapid arbitrary wavelength tuning, and match filtering in order to increase the signal-to-noise ratio for novel detection techniques.

We have demonstrated a widely tunable mid-IR source using a PL based on a tunable thulium-doped silica fiber (1905–1990nm) along with a MOPA based on erbium-doped silica fiber (1530–1585nm). The resulting source is tunable from 6.62μm up to 9.43μm. We tested many DFG crystals—silver gallium sulfide (AGS), silver gallium selenite (AGSE), and orientation-patterned gallium arsenide (OP-GaAs)—for their conversion efficiency as well as their phase-matching bandwidth stability without any temperature or angular tuning. Each crystal has its own advantages and trade-offs (see Figure 3). For instance, AGS provides the widest bandwidth for a single crystal unit but very low conversion efficiency. We achieved up to 1000nm of bandwidth around 7.5μm with hundreds of microwatts of mid-IR radiation for watt-level SL power. On the other hand, AGSE provided fairly good efficiency (>10mW) but with only ∼100nm of bandwidth under the same experimental conditions. In the end, we used OP-GaAs: a quasi-phase-matching crystal. We found it had the best conversion efficiency (>40mW) though it exhibited the narrowest tuning range (<50nm). Even though OP-GaAs crystals do not have a broad tuning range, the quasi-phase-matching medium provides an opportunity to engineer the crystal properties in order to significantly enhance the tuning range and hopefully reach the actual DFG spectrum achievable through use of the SL. 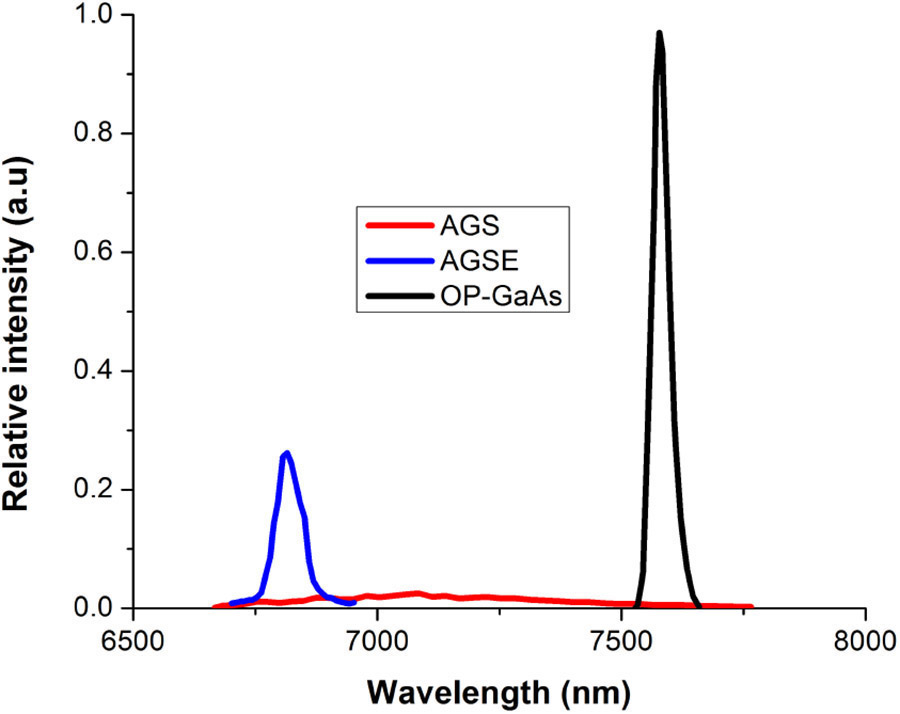 Additionally, we demonstrated that by combining an ytterbium-doped fiber laser (1030–1090nm) with one that is erbium-doped (1530–1585nm) within a periodically poled lithium niobate crystal, it is possible to obtain a tunable source (2.9–3.8μm) with exactly the same technical advantages.5

In order to target applications such as explosives detection, we have developed a mid-IR laser source that applies DFG techniques to a synchronized laser. One of the main advantages is the fast tunability of the programmable laser. This feature allows the user to rapidly tune the laser frequency over a specified range in either a sequential or arbitrary manner. Another advantage is that the resolution and speed are fully programmable and can be independently set by the user. This is possible because the laser is driven by advanced electronics that are controlled via a graphical user interface running on a PC. With these promising results, we can next combine our mid-IR source with the right components (e.g., detectors, optical components, and software) to engineer a complete system solution for molecular detection applications.

Mathieu Giguère has been a mid-IR system specialist with Genia Photonics since 2012 where he is technical lead of multiple projects in the Defense and Security sector. He has developed a strong expertise in nonlinear optics and optical system design.