A helicopter pilot's natural vision can be reduced by darkness, fog, or snow, complicating the landing process. Even in good conditions, particles can be blown up from the ground by the helicopter's downwash, an effect known as ‘ brownout’ that can be disorienting. When a pilot loses visual contact with outside references, he can no longer detect lateral drifting of the helicopter shortly before ground contact. This loss of control has caused many accidents in the past, and until recently it was difficult to avoid. As a solution, we considered how to optimize helmet-mounted display systems—which are now widely available—to guide the pilot whose natural vision is reduced or even blocked.

Today, many types of fixed-wing aircraft are equipped with head-up displays (HUDs).1–3 These consist of a graphics computer, a projection device, and a semi-transparent mirror—the so-called combiner: behind the cockpit's window and within the pilot's field of view. HUDs are fixed to the aircraft structure and can graphically visualize flight status data as well as visual-conformal elements, such as the flight path vector in space, or the expected runway borders. The field of view usually ranges from 25 × 20° to 40 × 30°. These systems offer a monochrome (mostly green) display, and multi-color systems are in development. A helmet-mounted display (HMD) overcomes the reduced field of view of aircraft-fixed HUDs. Together with a tracker, which measures the head's orientation, the graphics computer can generate images that are aligned to the outside world. To realize and test our display concepts, we installed a JEDEYE™ (Elbit Systems Ltd.) HMD system (see Table 1 and Figure 1) in our simulator as well as in our research helicopter EC135. Historically, helicopter HMDs have applied mainly 2D symbols. Therefore, we considered the 2D brownout symbology system (BOSS) display as a base model (see Figure 2).4–6 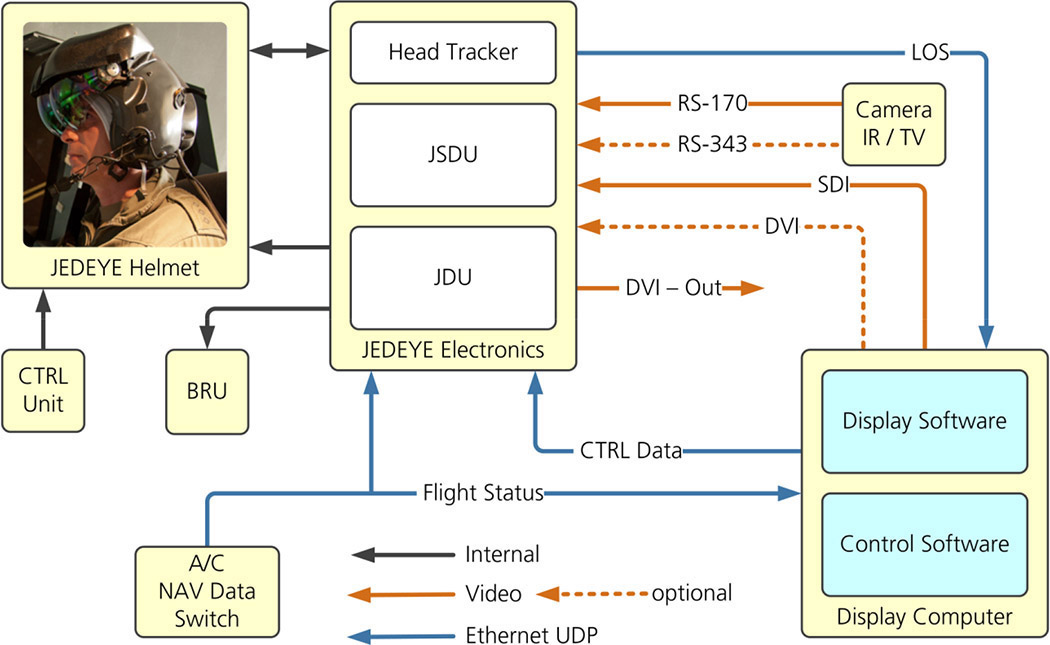 We conducted simulation trials, flight testing, and questionnaires with pilots over a two-year period to evaluate these 2D systems. The results indicated that the formats require intensive training, and pilots reported that \ situational awareness is somehow confused"7 because the information in these displays is not directly referenced to the outside situation. Based on this feedback, we sought to make the existing approaches to implementing 2D display formats more intuitive8 (see Figure 3). Our aim is to depict as many elements as possible in 3D while omitting items such as ground grids, which obstruct vision by reducing the transparency of HMDs (see Figure 4). 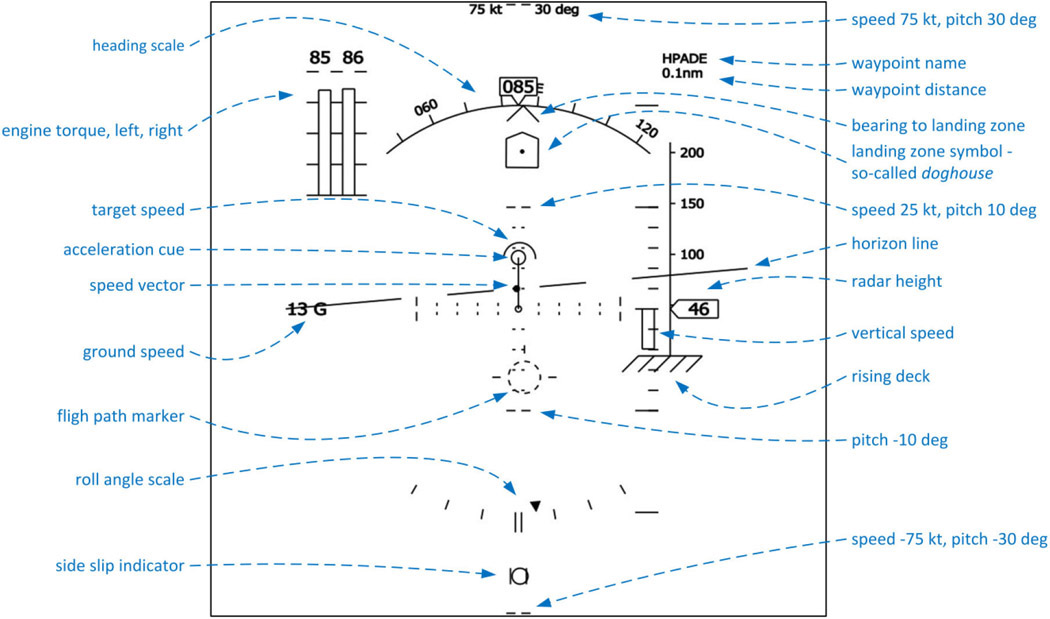 Figure 2. 2D symbology of the DVI landing display based on the brownout symbology system (BOSS) proposal. 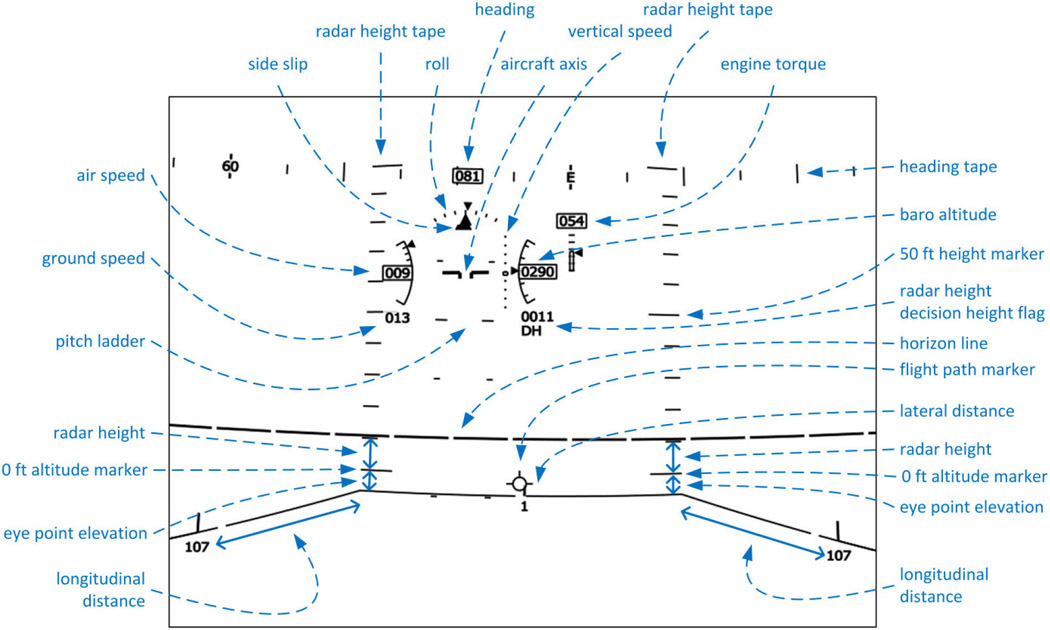 Figure 4. The complete visual-conformal 3D perspective landing display. The image distortion is intentional and a result of the system's spherical projection. 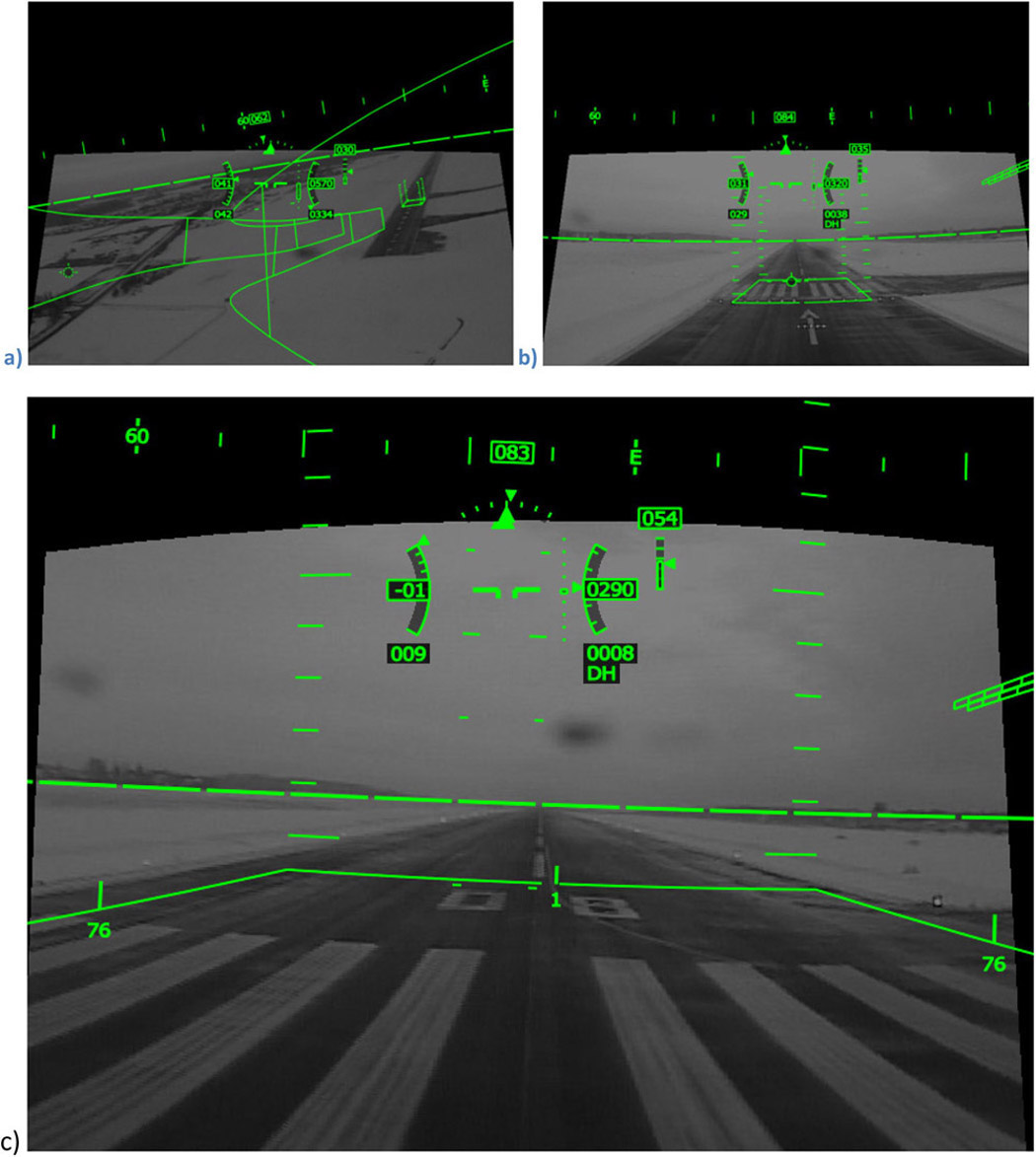 Figure 5. Landing on a predefined landing zone (RWY 08), with background image from a helicopter-mounted camera. (a) At the end of the ‘tunnel’ configuration applied during flight. (b) The landing zone graphics with four 100ft poles. (c) At 8ft above the ground.

First, we show some primary aircraft instrumentation symbols, which are aligned with the helicopter's body coordinate system. These include aircraft reference symbols, roll scale, airspeed, groundspeed, pressure altitude, vertical speed, and engine torque. All other symbols, such as horizon line, pitch ladder, heading tape, and flight path marker are fixed to the terrestrial coordinate system.

The landing zone is shown in perspective as a virtual rectangle on the ground. At each corner a pole pointing upwards serves as a radar height tape. The pole is 100ft in height, subdivided into 10ft intervals. The intersection point of the horizon line with each pole shows the same height above the ground, thus is independent of horizontal and rotational movements.

The lateral distance from the landing zone center is depicted by a marker at the front border of the rectangle. The longitudinal distance from the center is visualized by two markers (shown at the left and right borders of the rectangle), which are shifted in a forward direction by half the length of the landing zone rectangle: see Figure 5(c). We apply an additional so-called tunnel in the sky9 for the flight and landing approach. Switching between the tunnel and landing configurations is carried out automatically depending on the helicopter's altitude and distance to the selected landing zone: see Figure 5(a).

Our visual-conformal display concept offers a clearer, helmet-mounted system that can enhance guidance technology, with potential to improve the safety of helicopter missions. Our next step in implementing the JEDEYE HMD is to run simulation trials and flight tests with helicopter pilots.

Hans-Ullrich Doehler gained a diploma in electrical engineering in 1983 and joined the SIEMENS research center in Munich. From 1985 to 1989 he was a scientific assistant at the Technical University of Braunschweig, and in 1990 he obtained a PhD in image segmentation. He has worked for DLR since 1990, where his focus is on imaging sensors, image analysis for navigation, enhanced vision, and display systems.