Predictions of unique and potentially useful optical properties, such as negative refraction, have triggered a quest to implement artificially engineered structures known as metamaterials.1 To date, optical negative refraction at frequencies ranging from the microwave2,3 to the visible4 has been achieved using metamaterials incorporating arrays of lithographically patterned metallo-dielectric resonators with subwavelength features and periodicity. The highly anisotropic refractive index typically associated with resonator-based metamaterials has, however, hampered the realization of bulk devices relying on broad-angle negative refraction, such as an isotropic Veselago flat lens (named after a proposal by Veselago that a flat slab of left-handed material possessing an isotropic refractive index of −1 could act like an imaging lens in free space). Moreover, lithographic scaling constraints hinder efforts to extend the negative refraction of resonator-based metamaterials to higher frequencies.5

Colleagues and I have developed a novel bulk metamaterial with an all-angle negative refraction electromagnetic response in the UV.6 It is based on stacked, coupled unit cells of planar MDMDM plasmonic waveguides,7 where M is silver (Ag) metal and D is titanium dioxide (TiO2) dielectric. We designed the metamaterial to exhibit a refractive index for transverse magnetic (TM) polarized light close to −1 for light centered around wavelength λ0 of 364nm. Figure 1 displays the cross section of a metamaterial structure formed by three unit cells of sputter-deposited, alternating layers of Ag and TiO2 to a total thickness of ∼450nm. An optically opaque chromium (Cr) film was deposited on top of the metamaterial slab followed by focused-ion-beam (FIB) milling of a 600nm-wide rectangular opening to define an illumination aperture for refraction experiments. 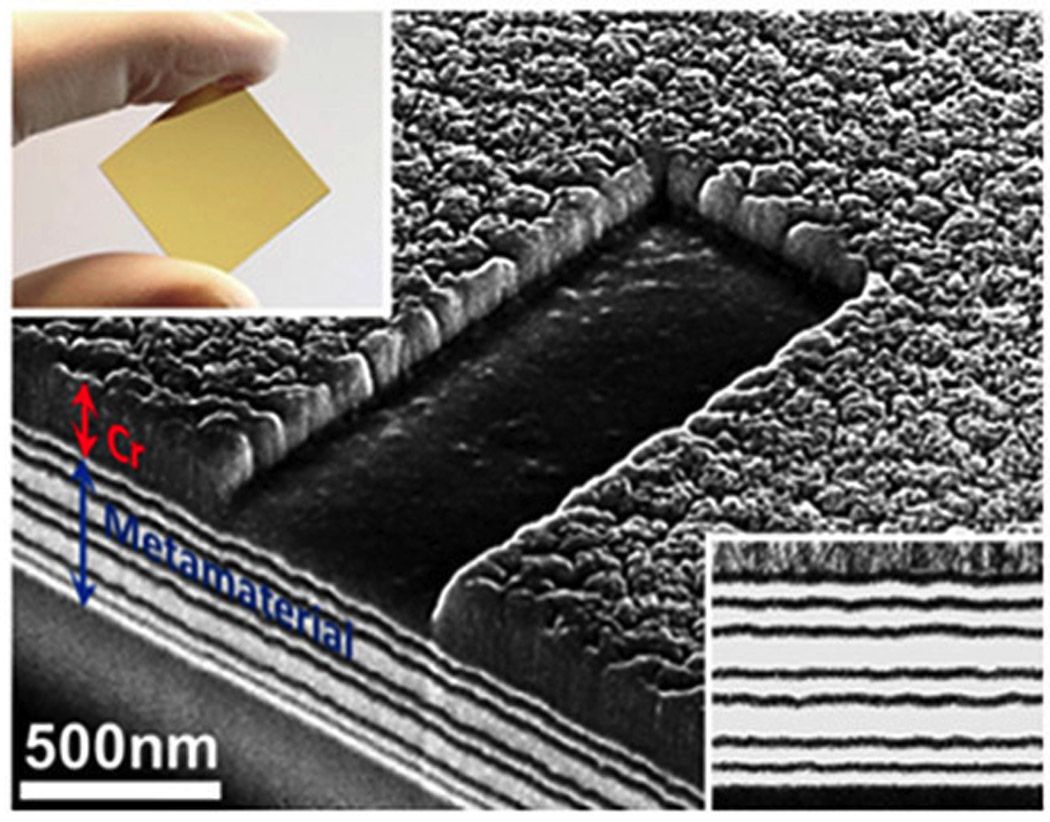 We characterized the refractive properties of the bulk metamaterial by subjecting its aperture-masked, air-facing surface to illumination at various angles using a TM-polarized (magnetic field parallel to the plane of the layers) argon ion laser operating at λ0=364nm. For each illumination angle, the lateral shift L of the maximum-intensity position of the transmitted beam relative to the aperture center was measured by imaging with an optical microscope, yielding the angle of refraction for power flow, θs. Based on L and θs, we calculated the refractive index for power, ns, which ranges from −1 to −1.5, with a relatively constant value ∼−1 for θi<40° (where θi is the incident angle): see Figure 2. These results agree well with finite-difference time-domain simulations of the structure. 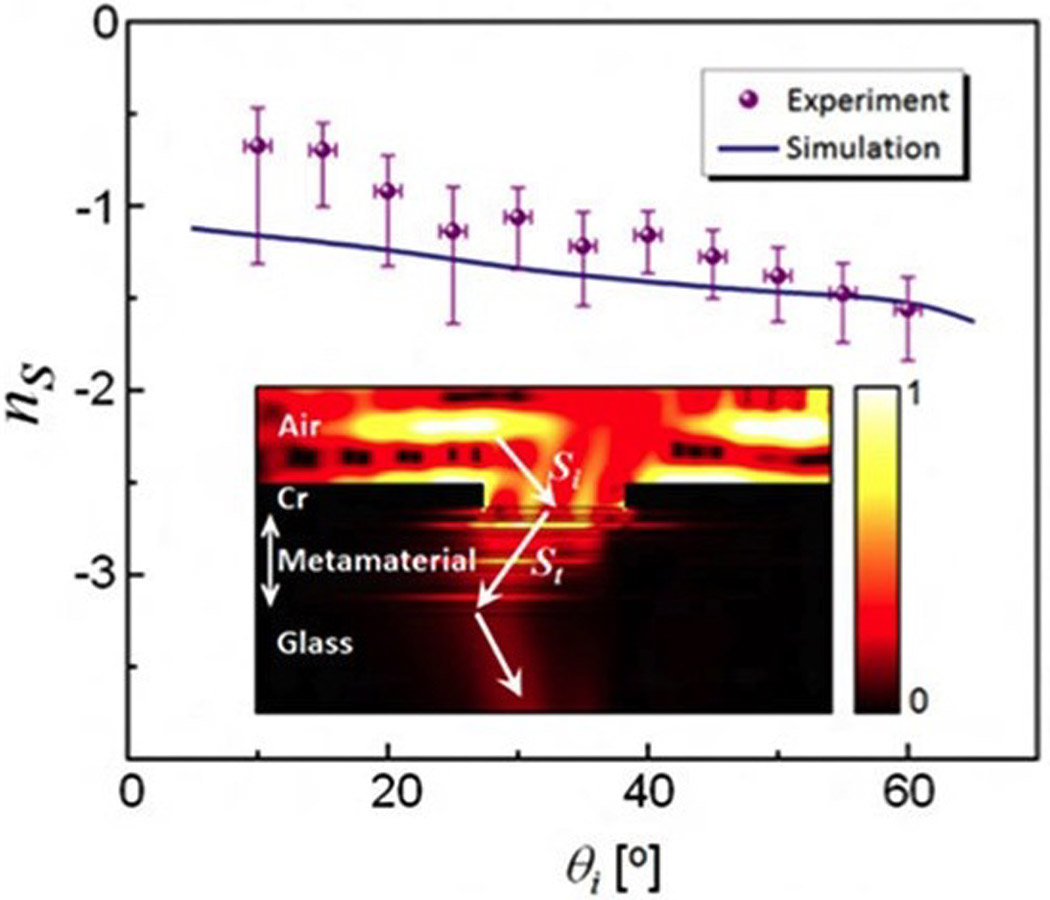 Based on the all-angle negative refraction achievable with this metamaterial, we fabricated a Veselago flat lens of thickness 450nm by sputtering alternating layers of Ag and TiO2 onto a silicon nitride (Si3N4) membrane previously coated with an optically opaque Cr film. FIB milling from the membrane side was used to locally remove the Si3N4 layer and then pattern the Cr film, forming planar objects of arbitrary 2D shapes on the metamaterial surface.

We illuminated the object apertures at normal incidence with circularly polarized UV light of wavelength 364nm. Optical characterization of the image projected by the metamaterial demonstrated flat lensing beyond the near field: see Figure 3(a–d). In addition, we have shown that the intensity of a UV image transferred by the metamaterial flat lens can be dynamically varied by illuminating the exit surface of the lens with a pulsed pump beam (λpump=290nm) tuned above the bandgap of TiO2 (EBG=340nm). 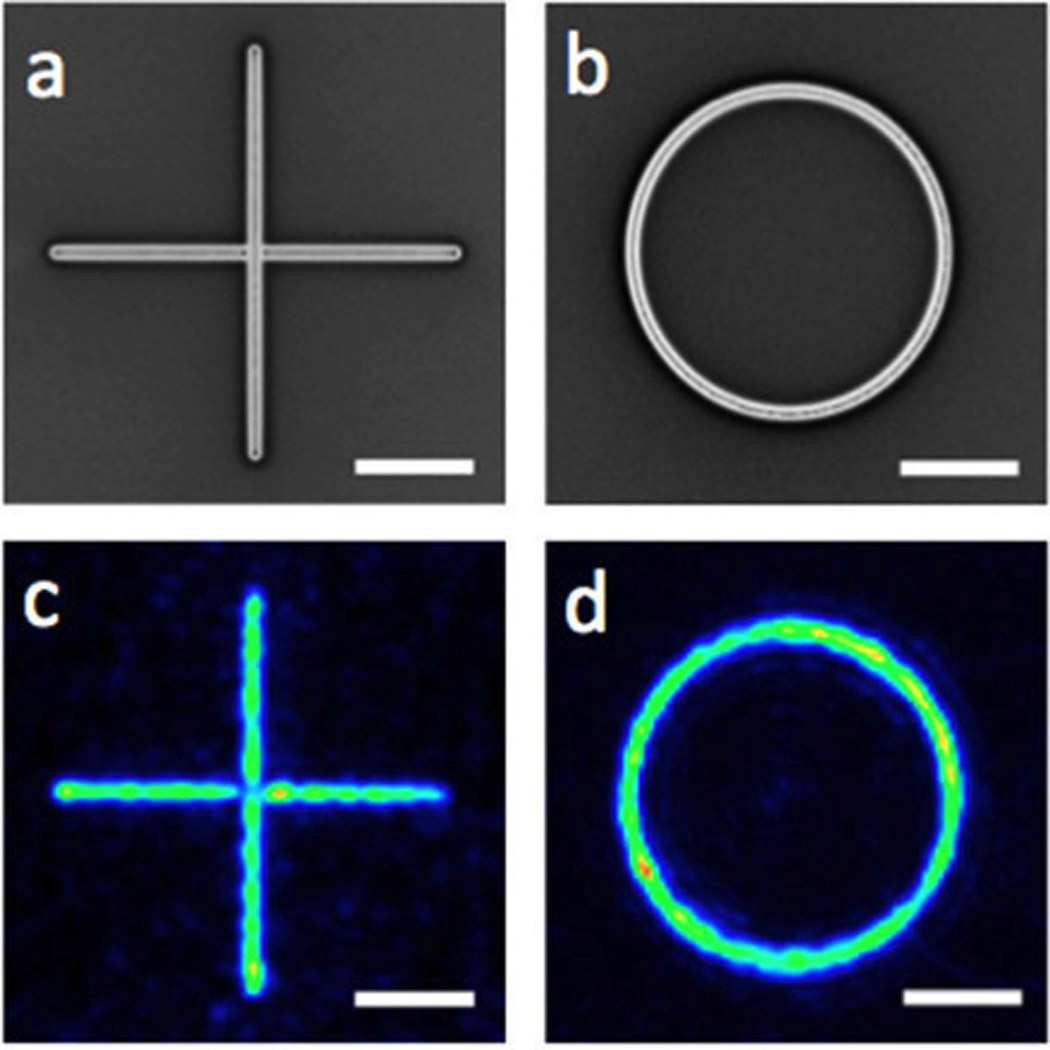 When the pump beam is turned on, the transmitted intensity ION decreases relative to the transmitted intensity in the absence of pumping, IOFF. The corresponding intensity modulation contrast γ= (IOFF−ION)/IOFF, displays a quasi-linear dependence on pump-beam intensity, increasing to a value γ∼50% at the maximum explored pump intensity below damage threshold for the sample: see Figure 4. Conversely, pumping the metamaterial to similar intensities at a wavelength tuned below the TiO2 bandgap (λpump=760nm) yields no significant transmission modulation. The maximum modulation contrast observed here suggests that plasmonic-waveguide metamaterials incorporating semiconductor layers are promising candidates for an all-optical tunable UV modulator. 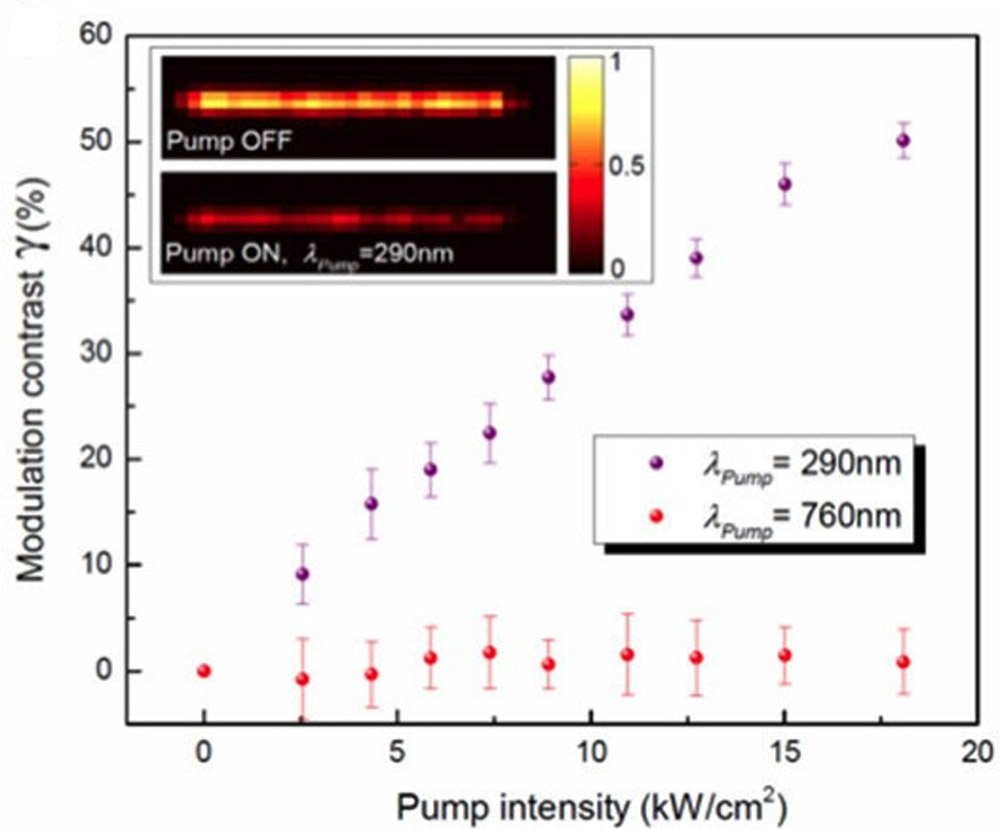 The fabrication-friendly planar architecture of the metamaterial exploited here shows promise for building large-area, cost-effective volumetric optical elements for dynamic manipulation of light beyond the visible. We are now exploiting other applications of the planar UV metamaterial, such as projection photolithography.