Nanosphere lithography (NSL), originally termed ‘ natural lithography’ by its inventors,1 is becoming a widespread bottom-up technique to pattern solid surfaces at the sub-micrometer and nanoscales. Groups such as Van Duyne's2 at Northwestern University and others3 undertook pioneering work on NSL in the 1990s and early this decade, and a growing number of research laboratories around the globe now use the technique in many scientific disciplines. The approach has applications in various materials systems, is fast and scalable to large surface areas, and is inexpensive in terms of equipment and operation. Some variants of the technique have reached a high level of maturity and control. Therefore, it is likely that it will soon be used in device fabrication.

Figure 1. (a) Plane-view transmission electron microscopy bright-field image of an array of thermally evaporated nanocrystalline nickel (Ni) dots (dark) on silicon after removing the nanosphere lithography (NSL) mask. The size of the Ni dots is determined both by the size of the spheres and the clogging effects of the mask openings.5(b) Scanning electron microscopy (SEM) image of zinc oxide nanoparticles and nanowires arranged in an array on a silicon substrate by sputter deposition through a mask of 600nm-diameter polystyrene spheres. The NSL mask is removed in the front, but partially still visible in the background. (c) A regular network of silver-coated organic nanowires created by plasma modification of an NSL double-layer mask of polystyrene beads.12 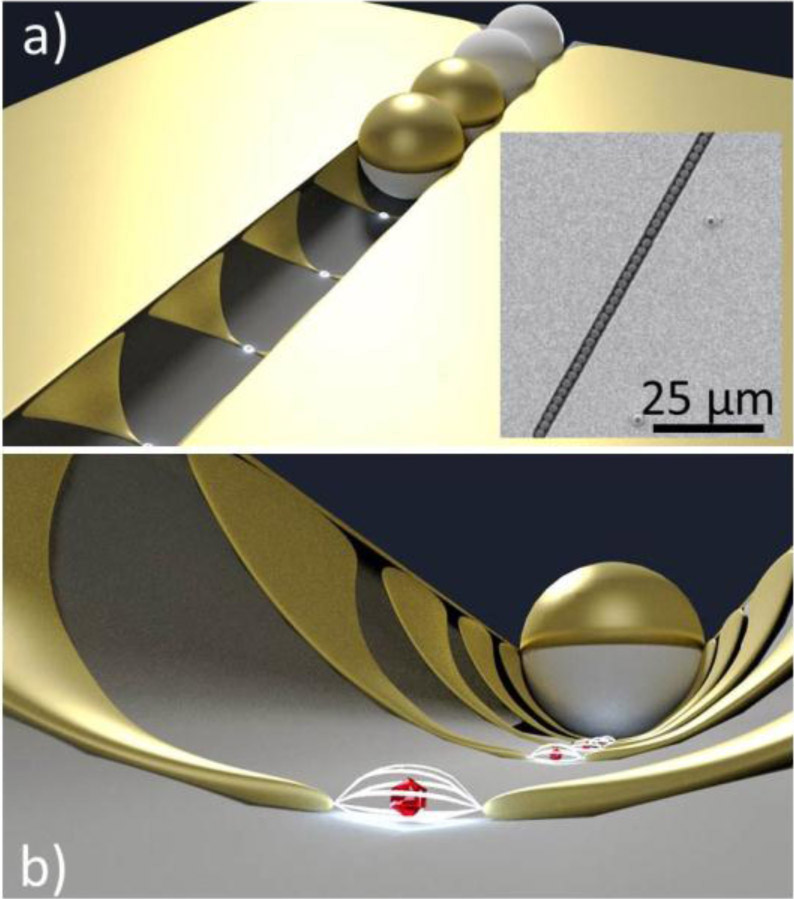 Figure 2. (a) Schematic presentation of NSL with spheres selectively assembled in a trench. The inset is an SEM image.18 The spheres at the front have been removed after depositing a metal film. Two spheres at the back are left uncoated. (b) A side view, where objects of interest (red) are seen trapped by electric fields between the tips. (Graphics courtesy of Robert Lindner.)

NSL exploits the self-organization of particles at the double- or triple-phase boundary of a colloidal suspension, which consists of a liquid phase (typically water or water-alcohol solutions) and spherical solid particles (polystyrene, polymethyl methacrylate, or silicon dioxide, for example). Suitable suspensions are fabricated by chemical precipitation processes and are commercially available. Particle diameters range from some 10nm to a few micrometers, with size variations of a few percent. The size distribution—among other factors—is of crucial importance for the quality of nanomasks, which determine the lithographic pattern. In the bulk of the liquid the colloidal particles are randomly dispersed and exhibit Brownian motion. However, at the surface, or at the thin menisci of the suspension (as exist at the periphery of a droplet, for example), capillary forces act on the spheres. On flat or slightly curved interfaces this leads to the self-arrangement of spheres in a hexagonally close-packed 2D mono (or double) layer. When this is placed on a solid substrate and dried, the space between each triplet of spheres can be regarded as a mask opening, where the substrate can be modified by adding or removing material using conventional thin-film deposition,1–5 sputter erosion, or ion implantation6–8 (see Figure 1).

Usually, the shape of nanoparticles formed by combining NSL and physical vapor deposition techniques is expected to be the shadow projection of the mask opening. However, there are several other influencing factors, such as the angular and energy distribution of the arriving atoms, the materials used (for deposition, substrate, and mask), the substrate temperature (influencing nucleation and crystal growth as well as the dewetting behavior of the deposited material), and the clogging behavior of the mask openings. Therefore, we study the morphology, chemical composition, and crystalline structure of arrays of nano-objects using transmission electron microscopy, and correlate this information to macroscopic properties. The shape of mask openings can be modified using thermal,9,10 plasma,11, 12 and ion beam processes.13,14 Combining this approach with hard mask deposition through NSL masks, subsequent reactive ion etching, and also the combination with angular resolved deposition techniques, we can create numerous complex 2D and 3D motifs arranged in close-packed hexagonal arrays.9, 12,15

NSL-created metallic nanostructures have been applied to study the plasmonic behavior of nanoparticle arrays,2 to create optical metamaterials,9 and to act as hard masks to pattern substrates for improved semiconductor epitaxy.15 NSL structures also act as catalysts for the growth of semiconductor nanowires,4 and can initiate pillar formation in glancing angle deposition of films, among other examples.16,17

Recently, we achieved the selective self-organization of spheres within a trench formed by optical lithography on a silicon wafer, using a doctor-blade-based NSL technique.18,19 Sphere deposition can be largely suppressed by a self-assembled layer of octadecyltrichlorosilane molecules on the substrate top surface: see Figure 2(a). Using this arrangement, we can create pairs of opposing metallic tips with nanometric tip radii within the trench. Exploiting the strong field enhancement between the tips, it should be possible to localize, manipulate, and address small objects within the trench: see Figure 2(b). Future work will deal with exploiting such linearly arranged field concentrators, with further improvements of large-area 2D NSL masks, and with the in-depth characterization of selected plasmonic and catalytic nanoparticle systems.

Jörg K. N. Lindner is a professor of physics and head of Nanostructure Formation, Nanoanalysis, and Photonic Materials. He serves as an executive committee member for the European Materials Research Society and the Center for Optoelectronics and Photonics Paderborn.