Single-photon detectors are a critical technology for measuring weak optical signals with fast temporal resolution. In contrast to CCDs and other high-sensitivity optical detectors, which integrate weak optical signals over a defined time period, single-photon detectors provide timing information for each photon detection event without adding read noise. These types of detectors have, therefore, become important in fields such as quantum optics, laser ranging, 3D imaging, free-space optical communication, and weak-fluorescence or thermal-emission measurements. Over the past 12 years, the performance of superconducting nanowire single-photon detectors (SNSPDs)1 has progressed not only at the device level but also at the packaged system level, which has allowed advances in many of these applications.2

SNSPDs are attractive because they combine high speed, low noise, and high detection efficiency, particularly at shortwave infrared wavelengths. Competing single-photon-detector technologies are interesting options at wavelengths shorter than 1000nm, but SNSPDs are unique in their combined performance at longer infrared wavelengths. Infrared operation is desirable not only for fiber optic systems but also because of eye-safety thresholds, transmission through the atmosphere and biological tissue, and unique opportunities to characterize emission from CMOS circuitry, singlet oxygen, and other sources. Consequently, recent SNSPD performance improvements have enabled advances and record-breaking experiments in many fields.

Over the past decade, design changes based on both established engineering approaches and solutions that are more unique to SNSPDs have improved the performance of these devices. Since the development of the earliest detectors,1 researchers have patterned the nanowire in a meander geometry to cover the desired active area: see Figure 1(a). Several years later, higher-efficiency SNSPDs began to incorporate dielectric and metal layers in a cavity-like structure to minimize transmission and reflection from the device:3 see Figure 1(b). The design of this structure accounts for the effective dielectric constant from the subwavelength gaps between wires, and recent designs can achieve near-unity absorption. Narrower, highly uniform nanowires, optimized geometries, and improved material selection and deposition have also contributed to higher detection efficiency. Combined with efficient optical coupling, these advances have enabled SNSPDs with system detection efficiencies exceeding 90%.4 Although individual nanowires do not permit discrimination of multiple photons that are simultaneous or closely spaced in time, SNSPDs with multiple, independent, interleaved nanowires (see Figure 2) can probabilistically provide this information5 and can also support higher count rates. 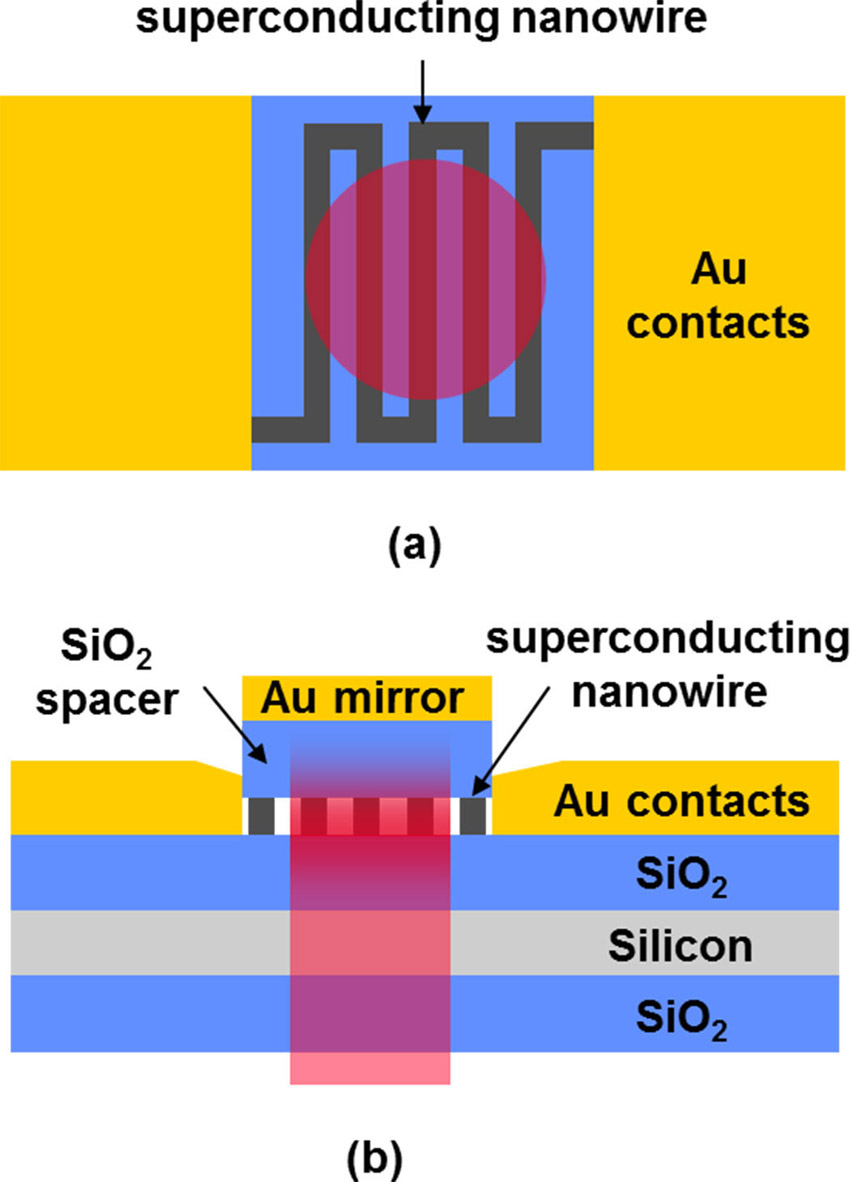 Figure 1. (a) Schematic of a superconducting nanowire viewed perpendicularly to the chip surface, with an optical beam centered and nearly filling the active area. (b) Cross-sectional schematic of the superconducting nanowire with a cavity-like structure designed to minimize the transmission and reflection from the device. In this example, the optical beam is incident from the back side of the wafer. Au: Gold. SiO2: Silicon dioxide.

Figure 2. Scanning electron micrograph of a four-element superconducting nanowire single-photon detector. The nanowires are 80nm in width and patterned to cover an ∼14μm-diameter active area with 60nm gaps between the nanowires. We highlight the four electrically independent nanowires with different colors in the magnified view on the right. The electrically disconnected, uncolored features at the top of this micrograph are fabricated to improve the patterning uniformity of the nanowires in the active area.

Recently, we developed a packaged SNSPD system that uses all of these advances to simultaneously achieve high system detection efficiency, low dark count rates, precise timing resolution, high count rates, and limited photon-number resolution.6 We investigated our SNSPD at a specific bias current where it achieved 68% system detection efficiency at a photon flux of 100 million photons per second in the input fiber. Further, at this operating point, the detector system has a few kcount/s dark count rates and <80ps timing resolution. In addition to supporting higher count rates and limited photon-number resolution, our four-element SNSPD system can also measure up to four simultaneously incident photons. Finally, we have used lower-efficiency versions of the system to accurately measure intensity correlations to study nonclassical light sources7 and single particles that fluoresce at infrared wavelengths.8

Future progress in SNSPDs aims toward larger arrays and new optical coupling and packaging approaches. One of the most challenging aspects to developing larger arrays of these cryogenic detectors is the required high-speed readout. Two of the current approaches to multiplex the detector outputs at low temperatures, which minimizes the required number of high-bandwidth connections, use CMOS-based integrated circuits or digital superconducting circuits with the potential to scale to hundreds or even thousands of detector elements. In addition to advancing the readout, researchers are also pursuing new approaches to optical coupling. In particular, waveguide-coupled SNSPDs will allow integration with optical components on a single chip. Additionally, we are fabricating SNSPD arrays on wafers with microlenses to enable efficient free-space optical coupling in an imaging system or a spectrometer. Together, these advances will allow high-efficiency and high-speed single-photon detection in much more complex optical systems.

This work is sponsored by the Assistant Secretary of Defense for Research and Engineering under Air Force Contract FA8721-05-C-0002. Opinions, interpretations, conclusions, and recommendations are those of the author and are not necessarily endorsed by the United States Government.