Extreme UV (EUV) imaging, conducted over wavelengths 124–10nm, enables global observations that could tie together numerous in situ measurements made by Earth-orbiting satellites.1,2 Such information could enhance our understanding of how the sun and the earth interact.

First, EUV imaging captures the interaction of dayside solar wind—plasma from the sun—with the earth's magnetic field, the magnetosphere. This event, known as the solar-wind-magnetosphere (SWM) interaction, defines the energy input to the SWM system (see Figure 1). As solar wind encounters the dayside magnetopause (the point at which the wind pressure is equal to that of the magnetosphere), charge exchange between solar wind αparticles (He++ ions) and the neutral exosphere produces a 30.4nm emission that ranges from 0.25 milliRayleighs (during nominal conditions) to 6 Rayleighs (during disturbed conditions). We know that this solar wind energy input carries field lines over the polar caps to the nightside, where explosive substorms produce an earthward (or sunward) return flow that erodes the inner magnetosphere (the plasmasphere), causing the formation of sunward-pointing dayside plumes. These can transport away 30–100 tons of magnetospheric plasma (approximately 20–40% of the initial He+ distribution) in just a few hours.3 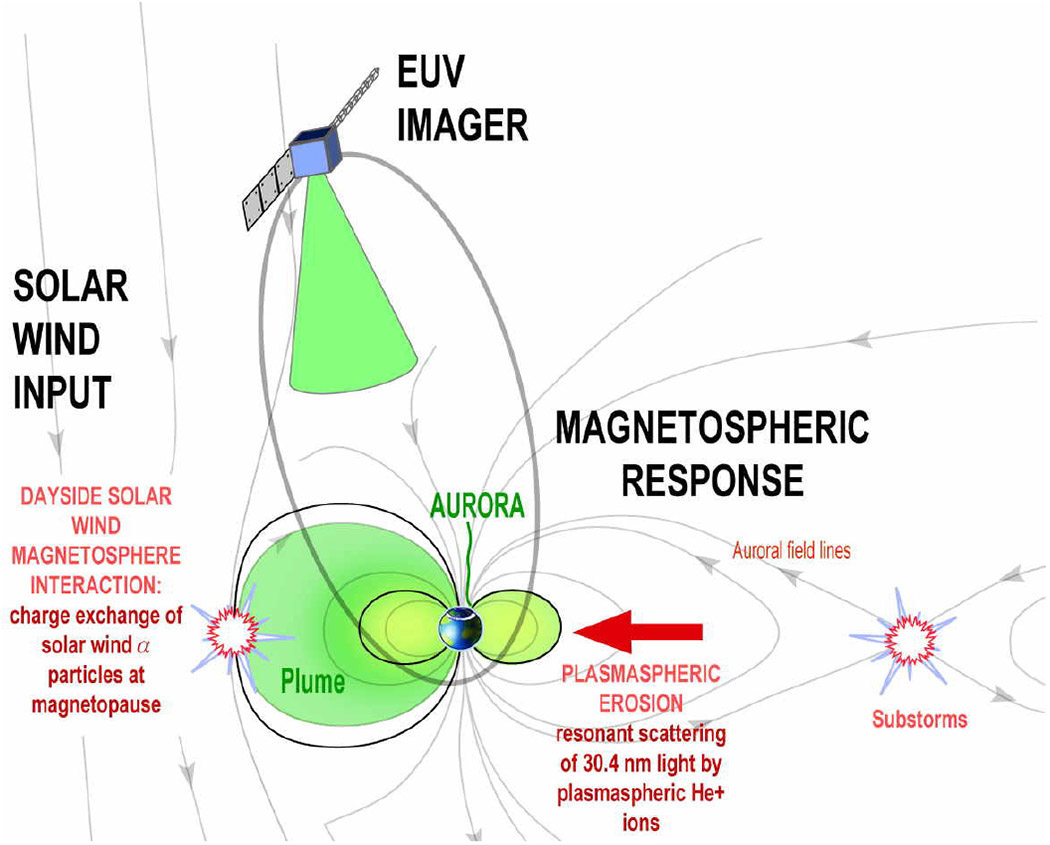 Figure 1. Schematic diagram of the full cycle of solar-wind-magnetosphere (SWM) interaction, from dayside to nightside and back. EUV: Extreme UV.

The EUV imager aboard NASA's Imager for Magnetopause-to-Aurora Global Exploration (IMAGE) satellite captured the erosion process with 10min resolution.4 An improved EUV imager that could capture erosion with 1min time resolution would answer many outstanding questions about the mechanics of the removal of so much plasma. Second, theoretical models and some observations5,6 suggest that the arrival of tons of dense plasma at the magnetopause may reduce or suppress the solar wind energy input. Therefore, feedback from the magnetosphere could squelch the SWM interaction. Finally, we know from the IMAGE mission that EUV-filtered imaging also captures the far-UV aurora, which is a measure of the overall time-dependent strength of the SWM interaction.

With these goals in mind, we designed an updated EUV imager to take advantage of 15 years of advances in materials and technology (see Figure 2). Our intent is to fly the imager on a mission dedicated either to plasmaspheric science or as a payload of opportunity on another high-altitude Earth-orbiting payload. By binning the image (i.e., combining adjacent pixels to reduce spatial resolution and enhance signal to noise) down to 0.45° resolution, we can capture the global shape and structure of the nightside eroding plasmapause with a time cadence as rapid as 1min. Background rates are very low, with the largest source being the near-Earth helium 58.4nm geocorona (∼200 Rayleighs, confined to within ∼2 Earth radii, or RE) at 25 counts/resel (resolution element) in 60s (using attenuation relative to 30.4nm of ∼800 Rayleighs for the filter transmission, detector efficiency, and multilayer mirror reflectivity). We expect that an EUV imager observing from an apogee (furthest point of orbit from Earth) of 35RE will observe at least four equinoxes and 20 storms, substorms, or initiations of the convection cycle over a two-year mission. The sensitivity (0.4cm2 effective area) and field of view (40°)7 are sufficient to simultaneously image the entire plasmasphere from the nightside to the dayside magnetopause. The sensitivity allows for the temporal sampling required to characterize the behavior of large-scale magnetospheric convection and its response to solar wind forcing. 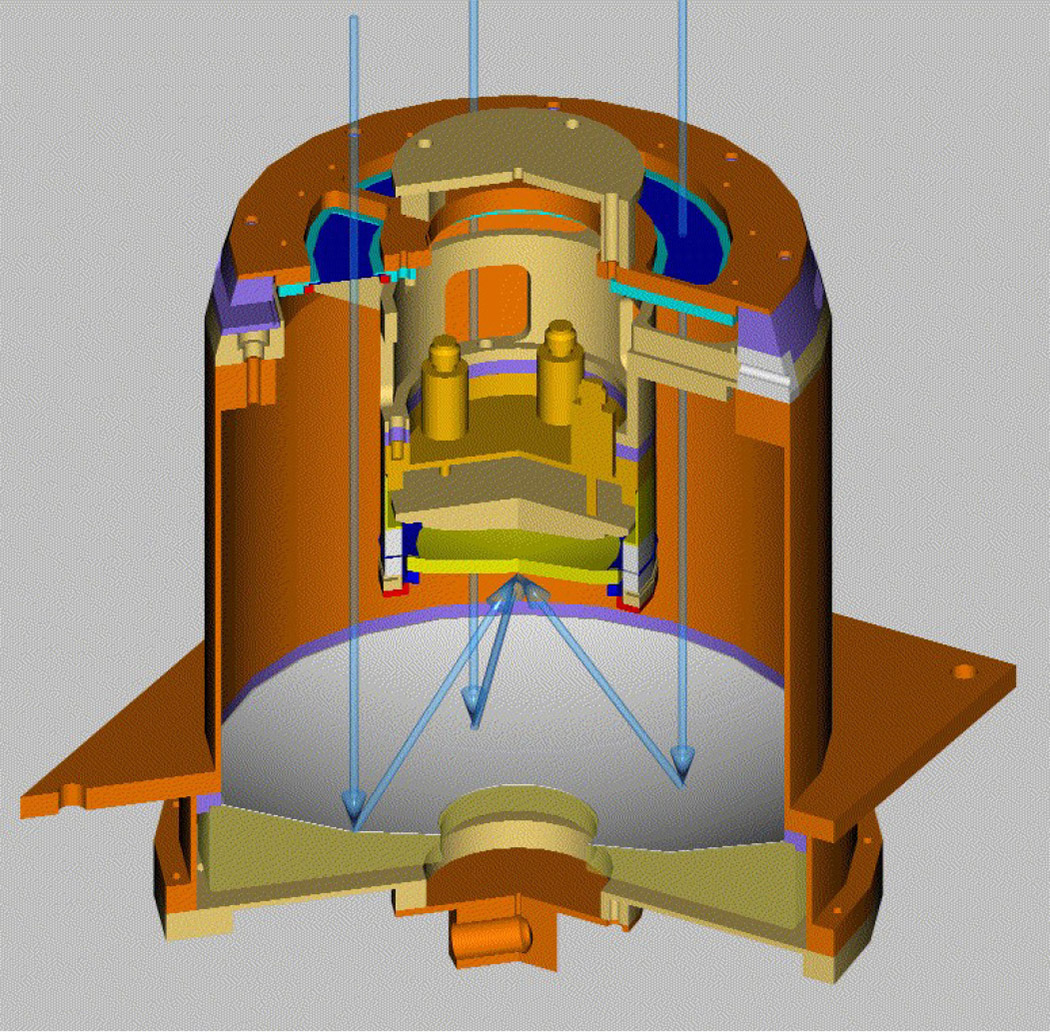 Figure 2. Concept model of an improved EUV imager. Light enters through an annulus at the top of the figure, where it encounters a Lyman-alpha blocking filter. The spherical primary mirror at the bottom of the figure focuses the light onto the spherical detector.

The IMAGE/EUV instrument's data was included in several papers during the satellite's mission, and is still in high demand today. An improved EUV imager will allow observation of the motion of He+ ‘plumes’ out to the earth's magnetopause, and possibly the interaction (charge exchange) of solar wind plasma with the earth's magnetopause. Plasma densities in the plasmasphere and near the magnetopause are low, and thus are traditionally measured with particle detectors in situ. However, where possible, remote sensing observations can provide information over a much larger region of space, and naturally lead to a much more accurate understanding of global plasma dynamics (during quiet and/or storm conditions). Thus, development of an improved EUV imager offers an invaluable scientific opportunity for future mission proposals (involving NASA's Explorers or Small Explorers spacecraft, for example).

Future enhancements in plasmaspheric science require greater spatial resolution than achieved by the new imager design. We could realize this with improvements in mirror coatings and detector technology, which would allow a second optic in the system to further correct off-axis performance. Work is under way on both desired improvements, as well as a wide-field optical design with improved spatial resolution.