Vector laser beams are characterized by having polarizations that vary spatially across the beam. In particular, cylindrical vector beams, in which the polarization has cylindrical symmetry and is singular on the beam axis, have attracted substantial attention because of their potential applications in electron acceleration, laser machining, remote sensing, and singular optics.1 Radially and azimuthally polarized beams are common cylindrical vector beams. The tight-focusing property of radially polarized beams is useful for high-resolution imaging.

Cylindrical vector beams can be generated either passively or actively. Passive methods involve varying the polarization outside the laser cavity, whereas active approaches involve directly producing a suitably polarized laser beam. Since 1972, the typical method for directly generating a radially polarized beam has been to place a Brewster-angle axicon inside a cavity,2 and numerous studies have evaluated this process.3, 4 (Recall, light reflected at Brewster's angle is perfectly polarized.) Recently, Bisson and coworkers generated radially polarized off-axis laser beams by using an intracavity axicon similar to the Brewster-angle type, and proposed that such beams could provide high levels of energy transfer to metals and plasma heating.4 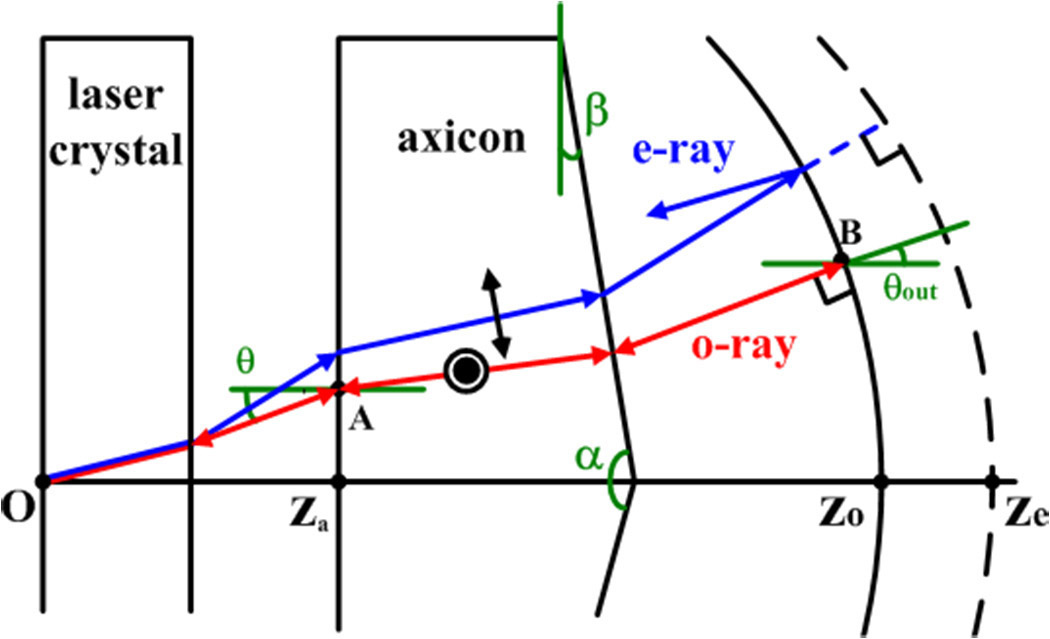 Figure 1. Geometrical ray-tracing diagram of the hemispherical cavity.5The thicknesses of the axicon and crystal are enlarged to show the ray tracing. When the curved mirror is at position Zo, the ordinary rays (o-rays) form an azimuthally polarized laser beam. With the mirror at Ze, the extraordinary rays (e-rays) form a radially polarized beam. α: Apex angle of the axicon.

To generate an off-axis laser, we chose a hemispherical cavity design from a report by Wu.6 In a typical hemispherical cavity, all oblique rays from the center of the hemisphere are normally incident to a curved mirror, and rays repeat the path after two round trips. Inserting an axicon into the cavity creates a unique oblique path for generating the laser (see Figure 1). Only at that specific oblique incidence at the surface of the axicon does the beam have normal incidence on the curved mirror and thereby satisfy the self-consistency condition of the laser cavity. 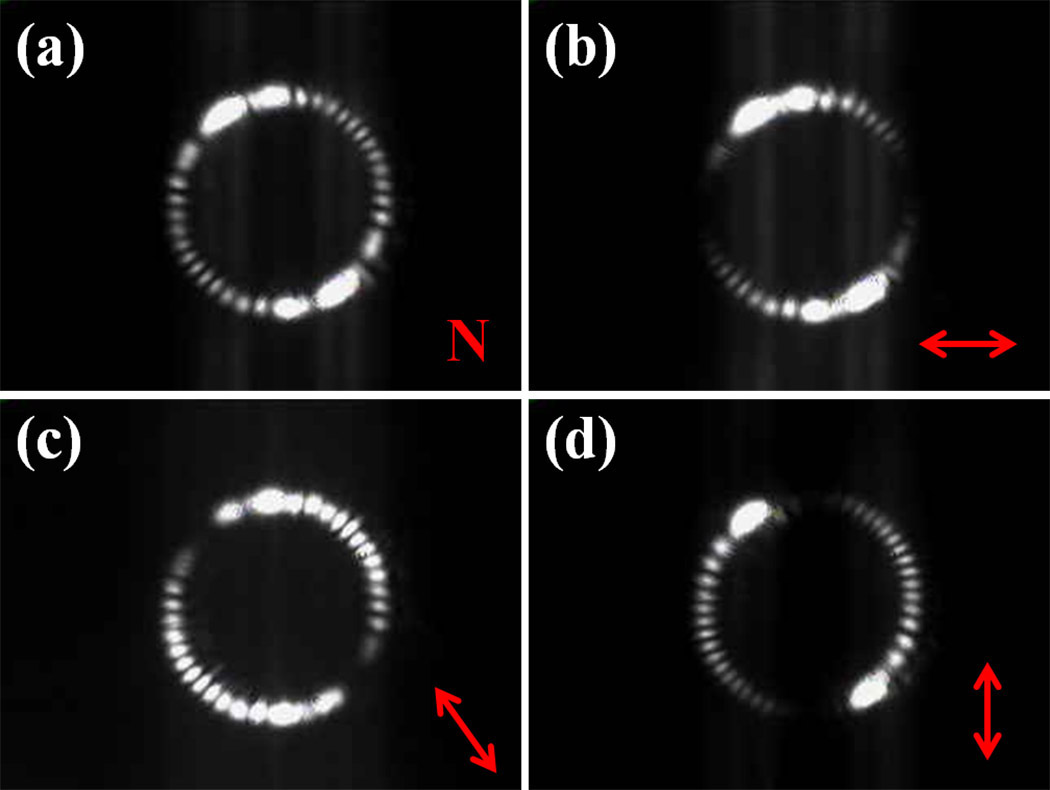 Figure 2. Azimuthally polarized near-field pattern viewed under various polarizer conditions. (a) The original pattern with no added polarizer (‘N’) is a multilobed ring. (b–d) A polarizer with polarization as indicated (red arrows) blocks the corresponding part of the pattern.5 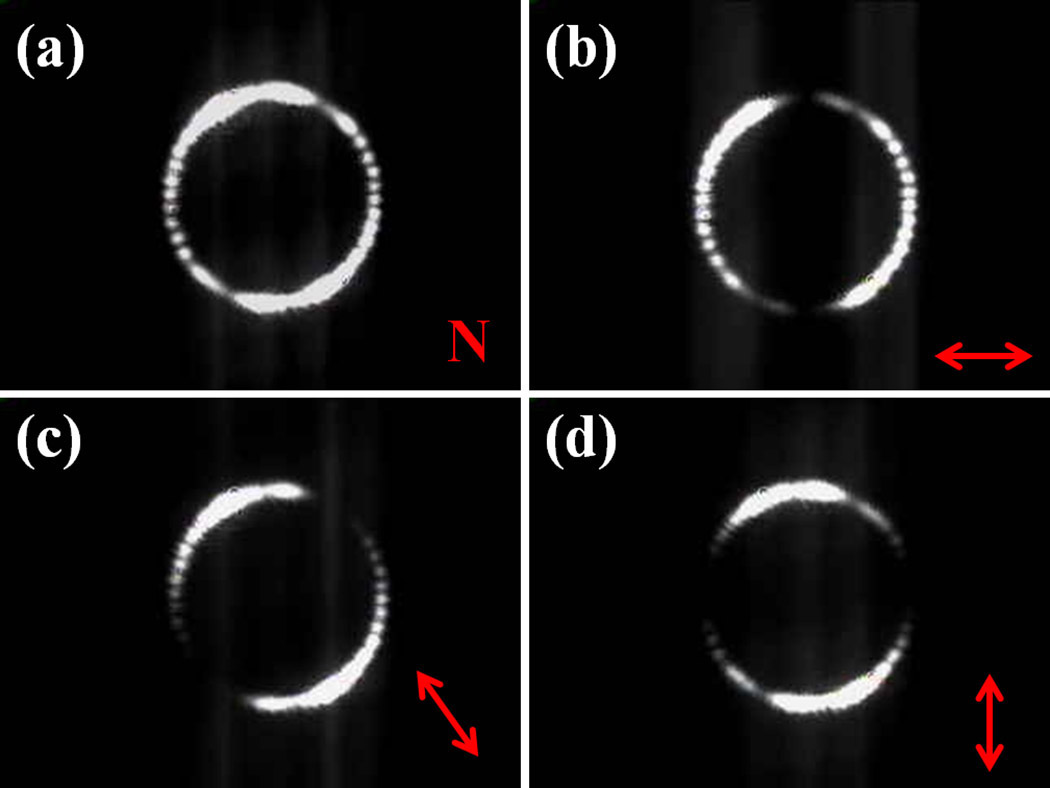 In summary, radially and azimuthally polarized lasers that comprise off-axis modes can be achieved using a large-apex-angle intracavity axicon in a hemispherical configuration. The beams can be transformed from one polarization to the other by slightly tuning the cavity length. In addition to investigating the generation mechanism of these cylindrical vector beams,7 we are currently studying their dynamics and the formation of patterns in them. These patterns are relevant to in-depth explorations of tight focusing, which is critical in various applications of the technology.

The authors would like to thank the National Science Council of Taiwan for financially supporting this research under contract NSC 101-2112-M-006-014-MY3.

Ming-Dar Wei received a PhD in electro-optical engineering from National Chiao-Tung University, Taiwan, in 1999. His areas of interest include the physics and nonlinear dynamics of lasers.