In the near future, health care practitioners hope to routinely incorporate quantitative information from medical images into their patient management plans. Quantitative image analysis (QIA) and computer-aided diagnosis (CADx) with mammograms, ultrasound, and magnetic resonance images, are being developed to identify novel, image-based tumor characteristics or signatures, which may ultimately contribute to the design of patient-specific breast cancer treatments. Clinically, computer-aided detection aims to provide a ‘ second opinion’ for the radiologist in locating suspicious regions within mammograms. However, the role of QIA/CADx is expanding beyond screening and toward applications in risk assessment, diagnosis, prognosis, and response to therapy, as well as in data mining to identify how lesion characteristics apply to disease states.

QIA is being developed to enable quantitative characterization of features in a suspicious region or tumor (those describing morphology or function, for example). The technology could enable merging of relevant features into diagnostic, prognostic, or predictive image-based biomarkers, and could estimate the probability of a particular disease state. Further functions include the retrieval of similar cases, and comparison of the tumor in question with thousands of others. QIA could enable exploration of the complex relationships among image-based tumor characteristics across large populations. It could also be used to conduct association studies between the signatures (for example, image-based phenotypes) and histological/genomic data for imaging genomics.1, 2 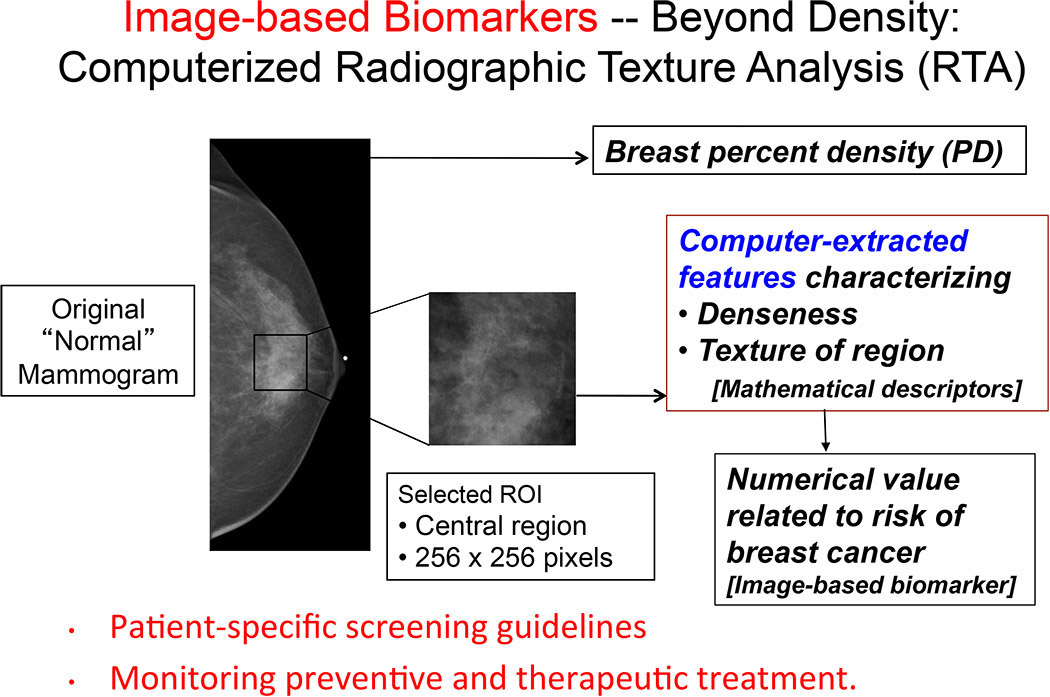 For breast cancer risk assessment, quantitative analysis of the digital mammogram can yield information on breast density and parenchymal (structural) patterns. Such analyses are conducted on images of ‘normal’ breast tissue in women who are undergoing screening for breast cancer. We have shown that women at higher risk for the disease tend to have mammograms that show high breast density and a parenchymal pattern that is coarse and low in contrast (see Figure 1).3, 4 While results are promising across screen-film and full-field digital mammograms, we still need clinical validation within a large screening program. We are also extending such analysis to breast ultrasound and MRI, which we are investigating in screening women deemed to be at high risk for future breast cancer. 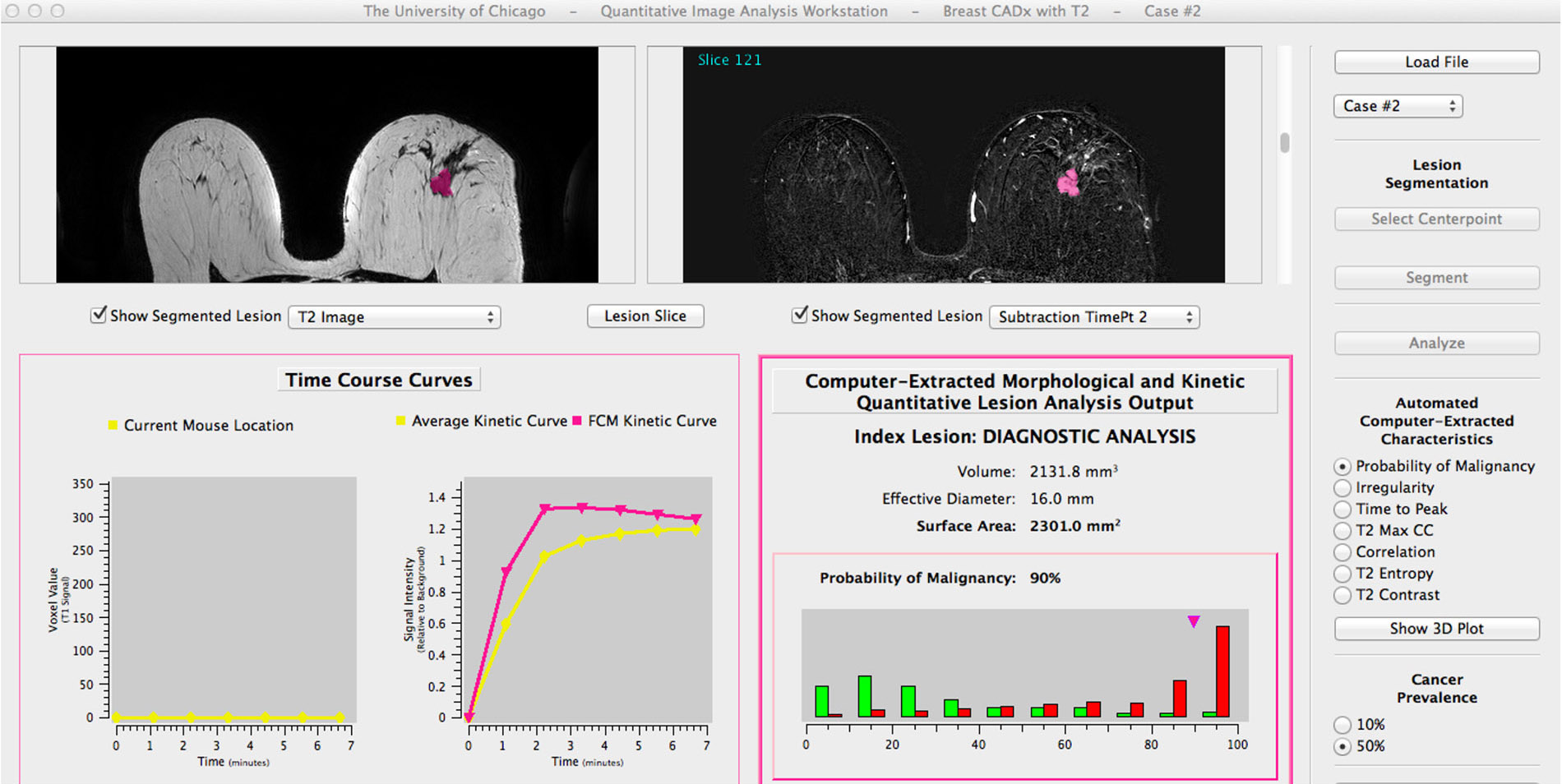 To calculate image-based signatures for diagnostic and prognostic assessments, we investigated tumor and parenchymal features from multimodality breast images, including mammography, ultrasound, and MRI.5–8 For example, our quantitative MRI workstation (see Figure 2) outputs information on tumor size (volume and surface area), shape (irregularity), margin (sharpness and spiculation), texture, and kinetic characteristics (related to angiogenesis: formation of new blood vessels).9 Radiologists will ultimately be able to use these features in diagnostic workup to assess the likelihood that a suspect lesion is cancerous. We have applied our CADx methods on full-field digital mammograms as well as multiparametric MR images, including dynamic-contrast-enhancement MRI7 and T2-weighted MRI.10

Once we determine that a lesion is cancerous, we need an assessment of prognosis and potential treatment options. To achieve this, we have been relating the computer analyses of imaged tumors to pathology and molecular classifications, for example, in prognostic biomarkers.11, 12 We use the computer-extracted features of the tumor to assess its aggressiveness, as a ‘ virtual biopsy,’ which could be used with clinical biomarkers to help determine patient management. The QIA of breast cancer tumors aims to assess response to therapy, such as neoadjuvant therapy prior to surgical decisions.

Conducting association studies between image-based phenotypes and genomics, investigators will potentially be able to determine which tumor characteristics are related and which complement, with the ultimate goal of merging them to include both genetic and environmental contributions in clinical decision making. As a next step, we are using supervised and nonsupervised data-mining methods to identify potential relationships.13, 14

Maryellen L. Giger, is the A. N. Pritzker professor of radiology and medical physics. She serves as vice chair of radiology for basic science research, and as director of the Imaging Research Institute. She is the immediate past director of the Graduate Programs in Medical Physics. She is also editor-in-chief of SPIE's new Journal of Medical Imaging.15