A new approach to recording the motion of flapping wings

Flapping-wing micro air vehicles (FMAVs) are unmanned aerial vehicles that mimic the dynamics of birds and insects. They are widely used for civilian and military purposes such as reconnaissance and geologic exploration. However, FMAVs exhibit poor flight performance in comparison to their natural counterparts. Better active control of wing deformation could lead to significant improvements in lift force and efficiency. To enhance FMAV performance, engineers need to understand the flapping mechanism and dynamic deformation of a moving wing as clearly as possible.1 Unfortunately, the necessary measurements are difficult to make because a flapping wing is not a rigid body.

Existing technologies usually focus on digitizing and modeling the flapping motion of an FMAV using a few tracking points and a rigid body empirical model.2 However, because the wing is made of a flexible membrane, this approach fails to capture the complexity of the wing's motion and deformation. We have tried a different approach: by combining fringe pattern projection with Fourier analysis, we can reconstruct the 4D movement (3D shape plus deformation) of a flapping FMAV wing. This technique, called Fourier transform profilometry (FTP), lets us record the motion of the entire wing at high speed with dense sampling.3

In recent years, FTP has been used successfully to better understand dynamic processes.4 Since it only requires one fringe pattern, FTP can resolve complex motion at a high sampling rate. Meanwhile, full-field analysis allows researchers to model movement using a dense array of sampling points.5 The main idea is to project a sinusoidal fringe pattern onto the surface of a flapping wing. The deformed fringe pattern, modulated by the height of the tested wing, is captured by a high-speed camera. Using Fourier fringe analysis, the motion and dynamic 3D shape of the wing can be reconstructed from the deformed fringe patterns. 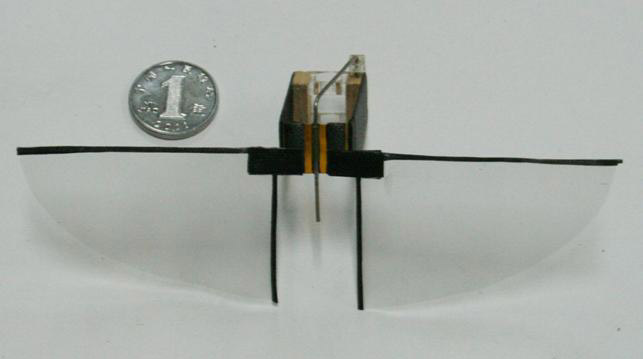 Figure 1. The flapping-wing micro air vehicle (FMAV) used to test our method for high-speed recording of the dynamics of a flapping wing.

We tested an FMAV with a 12cm wingspan (see Figure 1) at three different flapping frequencies: 14.60, 17.54, and 20.62Hz.6 We used an Epson projector to cast a computer-generated sinusoidal fringe pattern with 8 pixel periodicity on to the FMAV. A high-speed camera captured the deformed fringe patterns over one flapping period at a rate of 2000 frames per second: see Figure 2. Using FTP, we reconstructed the full-field 3D shape of the flapping wing in each sample, allowing us to successfully visualize one full flapping period. 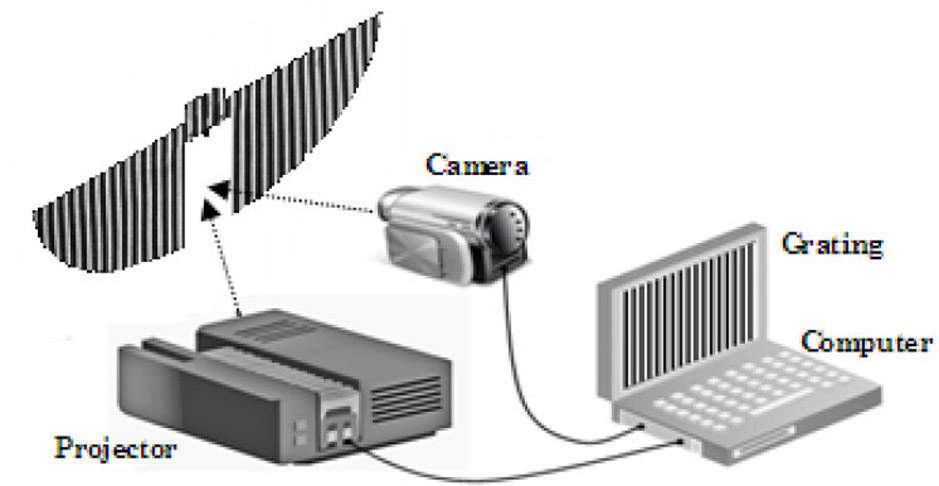 Figure 2. Our experimental setup: a projector casts a sinusoidal pattern onto the flapping wings of an FMAV. A high-speed camera records the deformed pattern and sends it to a computer, which analyzes the deformations and reconstructs the 3D wing motion in high detail. 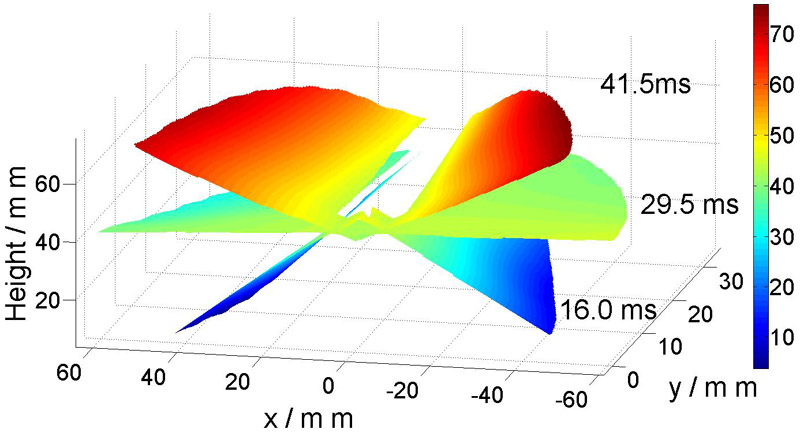 Generally, a flapping cycle consists of an upstroke, a downstroke, and a quick wing reversal at the end of the stroke. For example, Figure 3 shows the 3D shape of the 17.54Hz flapping wing at the end of a downstroke (16.0ms), midstroke (29.5ms), and upstroke (41.5ms). From the reconstructed data, we obtained the motion of the leading edge, root chord, and the displacement of points on them as well as the flapping and rotation angles: see Figure 4. 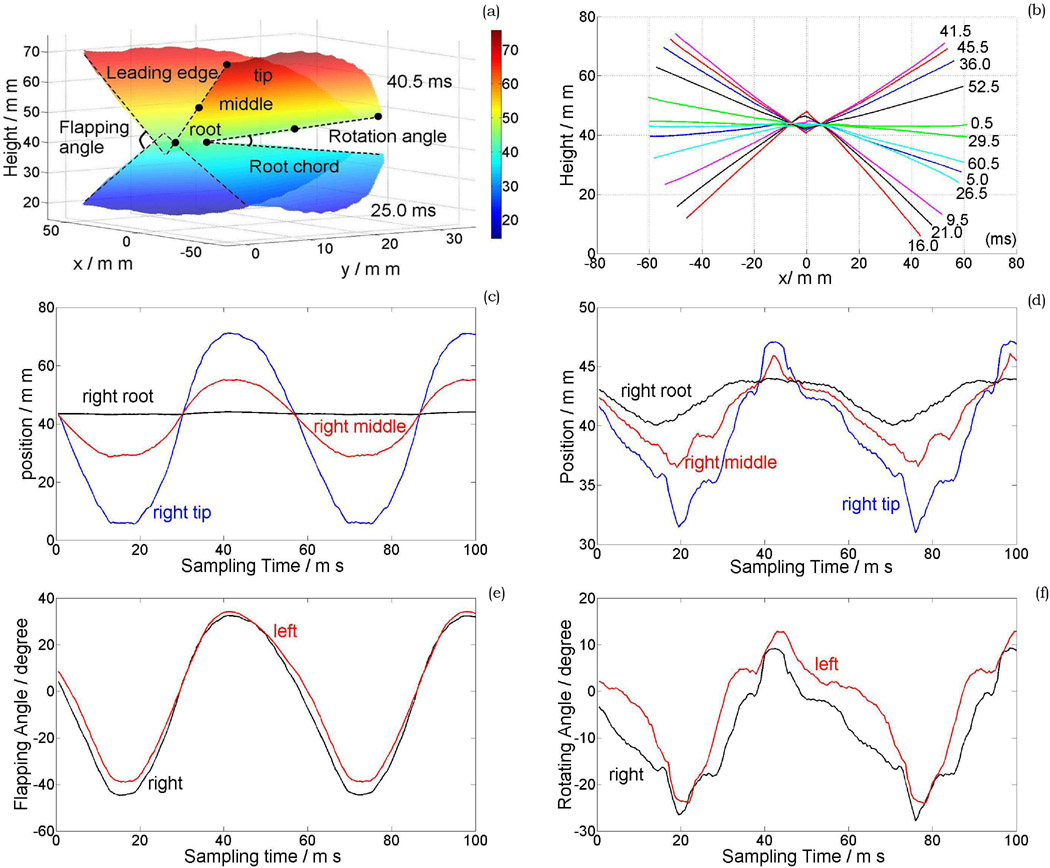 At the end of the downstroke (from 14.0 to 16.0ms), the wing's lift force peaks according to the rotational circulation and wake capture mechanism. The leading edge moves little while both the root chord and part of the wing plane clearly move down. When the upstroke begins (after 16.0ms), the leading edge starts to move up while the root chord is still moving downward until it reaches the bottom (22.0ms). During this interval, the wing plane has a quick downward reversal: see Figure 5. 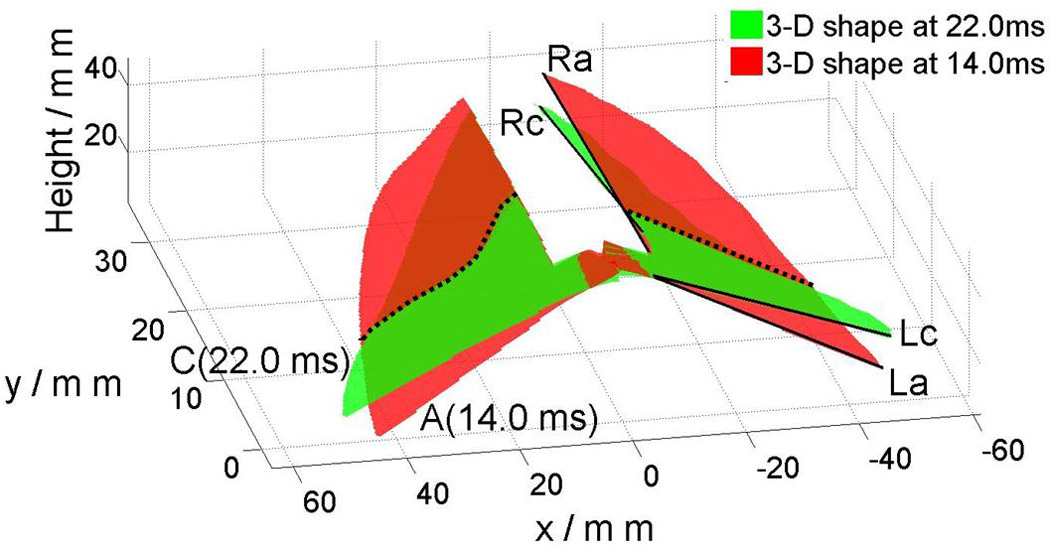 Using FTP and a simple, easy-to-use setup, we are able to reconstruct the 4D deformation of an FMAV. This technique is noncontact, does not require markers on the wing membrane, and does not assume the wing is a rigid body. Furthermore, it does not interfere with the flapping wing's intrinsic motion. FTP can record and rebroadcast the whole process of a flapping wing's deformation more efficiently than standard techniques, making it a useful tool for optimizing and upgrading FMAVs in the future. Our next step is to devise a system that uses two cameras, each with a different viewing angle, to fully capture a larger (90 degree) wing stroke. The results from both cameras will need to be stitched together to obtain the full view of a flapping wing.

This work is funded by the New Century Excellent Talents in University of China (NCET-11-0357).