In applications such as solar energy conversion to fuel and electricity, minimizing the amount of material required to absorb light is highly desirable. Thinner solar cell layers require less and potentially cheaper material, and consequently will cost less. Further, when light is absorbed in a thinner layer, more efficient conversion to useful work can generally be achieved.1, 2 One important challenge is to reduce the thickness of the solar cell absorber layer without compromising its ability to capture and convert sunlight into clean energy.3

In this context, a fundamental question is how much material is required to completely absorb light of a certain wavelength. One answer is suggested by the Beer-Lambert law, which states that the intensity of light drops off exponentially with distance as it propagates through an absorbing material. Moreover, the inverse of the material's absorption coefficient gives the characteristic length scale over which this occurs.

By making a layer of the material much thicker than this characteristic length, essentially all light that enters it will be absorbed. Some of the highest absorption coefficients are found for metals, with values around 100μm−1. This brings the minimum layer thickness required for complete absorption to the range of 10–100nm. Strongly absorbing semiconductors have absorption coefficients around 10μm−1 in the visible range, but these coefficients are lower near their so-called band gap energies. That is why the absorber layers in typical thin film solar cells are a few micrometers thick. 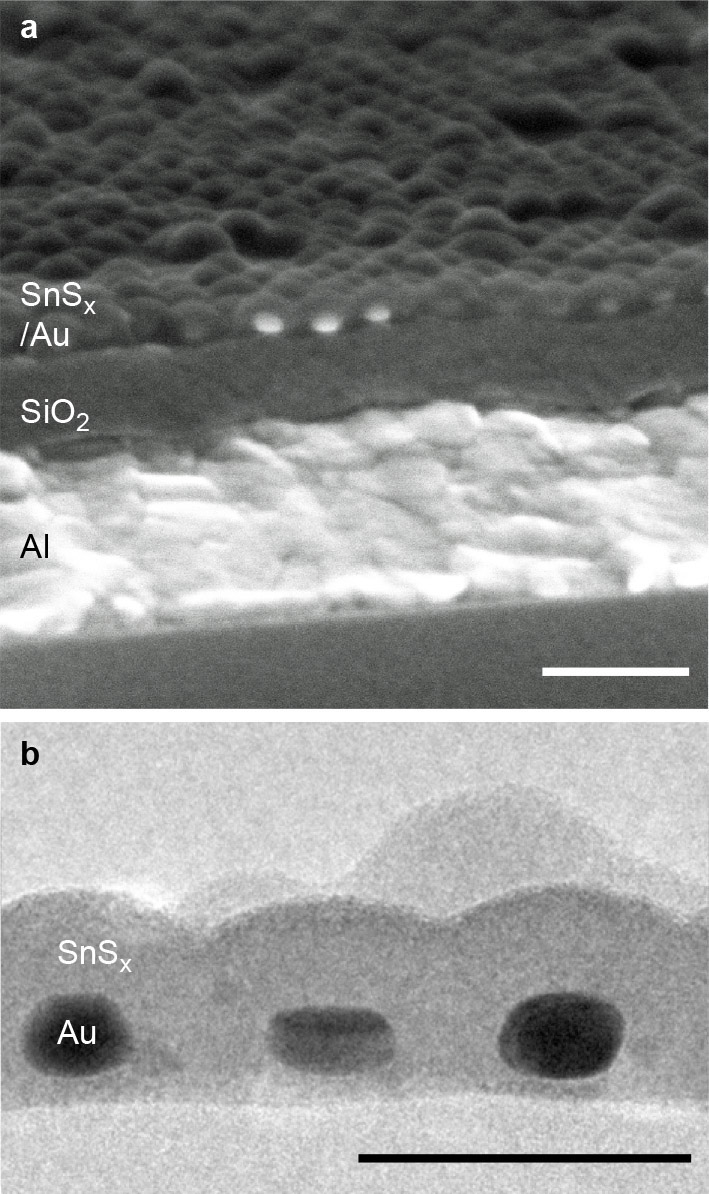 However, when a layer is much thinner than the wavelength of light, reflections from the front and back surfaces will add up coherently and have a strong influence on the overall reflectance and transmittance. When used to its advantage, this effect can help surpass expectations from the Beer-Lambert law. On the other hand, the same phenomenon fundamentally limits the absorption in an ultrathin (virtually 2D) layer to a maximum of 50% due to reflectance and transmittance losses.4To improve on this, the transmission can be blocked with a mirror positioned some distance (typically a quarter of a wavelength) behind the absorber layer.5 From an optical viewpoint, complete absorption of normal incident light can then be accomplished with an arbitrarily thin absorber layer.

In practice, few absorbing materials have the right optical properties in the correct spectral range for this approach to be useful. However, it turns out that by combining metallic nanostructures with semiconductors or dielectrics, the conditions for complete light absorption can often be met with much less material than anticipated from the absorption coefficients of the bulk counterparts. This is especially true for metals showing pronounced localized surface plasmon resonances, such as silver, gold, copper, and aluminum. These plasmon resonances ‘steal’ oscillator strength from other parts of the spectrum, and enhance the absorption around the resonance.

Plasmon resonances are highly sensitive to the details of the geometry as well as to the optical properties of the media surrounding the metal nanostructure.6 By controlling these properties, one may not only change the plasmon resonance frequency to a targeted range, but may also tweak the effective optical properties of a system to match the condition for perfect absorption in a 2D metamaterial (a synthetic composite engineered to have properties not found in nature).5 In our recent work,7 we took advantage of this adaptability to optically impedance match an absorber/spacer/reflector structure where the absorber consisted of a gold nanodot array coated by a dielectric film. The array was fabricated using block copolymer lithography, a technique based on self-assembly that resulted in a very well defined hexagonal array of gold dots. In our case, the dots were approximately 17nm across and 14nm high. Figure 1(a) shows a depth profile of a coated array and the reflecting support beneath it.

Figure 2. (a) Photographs of samples with and without arrays, and with varying atomic layer deposition (ALD) coating thicknesses. (b) Absorptance of Au dot arrays coated with, in this case, SnSx. The coating thickness ranges from 0 to 31.3nm. ZnO: Zinc oxide.

Tin sulfide, zinc oxide, or aluminum oxide was coated onto the arrays by atomic layer deposition (ALD), which allows for thickness control down to the atomic scale, producing highly uniform and conformal coatings. Dots were covered almost circumferentially: see Figure 1(b). Although these ultrathin coatings did not show significant light absorption themselves, they had a dramatic influence on the absorptance of the array (see Figure 2). For the most absorbing samples, overall absorptance above 99% was observed at a wavelength close to 600nm. Using spectroscopic ellipsometry, reflectance measurements, and numerical calculations by the finite element method, we found that up to 93% of the light was channeled into the gold dots themselves. Since the volume of gold in the array corresponds to a 1.6nm-thick layer, this result translates into a record high (effective) absorption coefficient of 1700μm−1. This exceeds bulk metals by an order of magnitude, as well as single graphene sheets and J-aggregates (a type of self-organized structure of dye molecules) in a similar setting,8 while complying with the fundamental limit to overall absorption for a given material (the optical f-sum rule).7

We believe these results are of importance for two main reasons. First, they substantially push the limits of what can be achieved in practice in visible light absorption per unit volume of material over an extended surface area, and they demonstrate a viable, scalable approach for how to do this. Near-perfect absorption of a single visible wavelength is accomplished, using 1000 times less material than in the absorber layers of today's thin-film solar cells. Second, the results are in excellent agreement with theoretical models. Our work provides experimental support for this modeling, which has been extended to show that using only 10–30nm-thick semiconductor coatings instead of dielectrics will broaden the absorption peak to cover much more of the solar spectrum while allowing for charge carriers with longer lifetimes to be created.5 Based on these results, there is hope that the absorbed energy in these ultrathin layers can be harvested in the form of electrical or chemical work, with a solar energy conversion efficiency exceeding 20%.9 Toward this goal, we are now exploring deposition of highly absorbing semiconductor coatings for the next generation of solar energy converters.

We gratefully acknowledge funding from the Center on Nanostructuring for Efficient Energy Conversion, an Energy Frontier Research Center funded by the US Department of Energy, Office of Basic Energy Sciences, award DE-SC0001060. C.H. thanks the Marcus and Amalia Wallenberg foundation for financial support.

Carl Hägglund graduated in engineering physics at Chalmers University of Technology, Sweden. He received his PhD in physics in the group of Bengt Kasemo at Applied Physics, Chalmers. He currently works as a postdoctoral scholar in the group of Stacey F. Bent.

Stacey F. Bent is Jagdeep and Roshni Singh Professor in Engineering at Stanford University. She received her BS in chemical engineering from the University of California, Berkeley, and her PhD in chemistry from Stanford. Her research focuses on surface and materials chemistry with application to sustainable energy and next-generation electronics.