Transition metal oxides (TMOs) have broad applications in organic electroluminescent devices, organic solar cells (OSCs), organic photodetectors, oxide-based photodetectors and photovoltaics, and electrochromic devices. The broad potential of TMOs stems from their capability to align with a wide range of energy levels, enabling them to form low-resistance ohmic contacts with organic materials.1, 2 In addition to their high transparency and desirable band structure, a further advantage offered by TMOs over other carrier transport layer materials—such as the widely employed poly(3,4-ethylenedioxythiophene):poly(styrenesulfonate) (PEDOT: PSS)—is their excellent stability in ambient environments, which can extend the lifetime of organic electronics.3 However, TMOs have had limited application in this field due to the harsh treatment conditions required by the material, such as high-temperature annealing, oxygen plasma, and dispersion in water.4

We have developed a novel one-step method to synthesize low-temperature solution-processed TMOs for use as hole (positive charge carrier) transport layers (HTLs).5, 6 Molybdenum and vanadium powders are oxidized by hydrogen peroxide in the presence of an amount of ethanol, which can be altered to control the reaction rate. This enables hydrogen metal oxide bronzes (HMOs), including hydrogen molybdenum bronze and hydrogen vanadium bronze, to be obtained. The HMOs undergo dehydration with a mild temperature treatment (<100°C), leading to oxygen vacancies in the resultant TMO films.

To demonstrate the effectiveness of these TMOs as HTLs, we fabricated and characterized a variety of OSCs. The device structure of these OSCs is shown in Figure 1, and their photovoltaic performance is summarized in Table 1. When molybdenum oxide or vanadium oxide with oxygen vacancies (MoO3− and V2O5−, respectively) are employed as HTL, the average power conservation efficiency (PCE) for our active layer—poly(3-hexylthiophene)/[6,6]-phenyl C61 butyric acid methyl ester (P3HT:PC61BM)—is 3.94 and 3.86%, respectively. The PCEs of both molybdenum oxide and vanadium oxide devices are superior to the OSCs with PEDOT:PSS HTLs, which have an average PCE of ∼3.68%. In addition to this, compared with PEDOT:PSS-based OSCs, the open-circuit voltage (VOC) suggests that there is no energy barrier between the organic materials and metal oxide when molybdenum oxide or vanadium oxide is employed as HTL. This allows for the easy transport of holes. The reduced series resistance and enhanced fill factor (the ratio of maximum obtainable power to the product of the open-circuit voltage and short-circuit current) also indicate good conductivity in the TMO films and a low barrier for efficient hole collection at the organic/TMO interface. Molybdenum oxide and vanadium oxide treated at temperatures as low as 80 and 100°C, respectively, achieved the best performance. 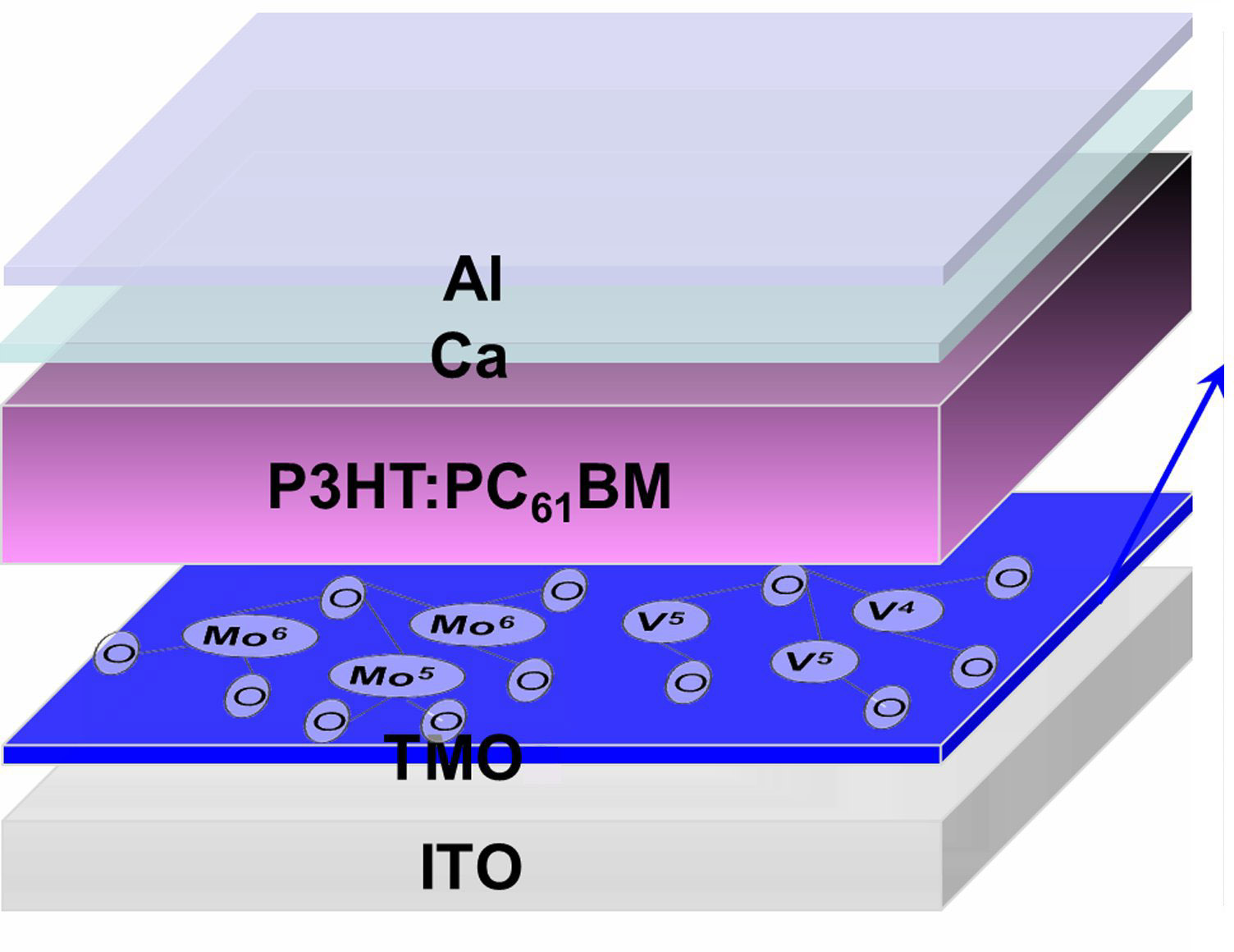 Using our new synthesis method, oxygen vacancies become a controllable parameter. Our results show that TMOs with excess oxygen (MoO3+, V2O5+) are highly undesirable for application in organic electronics. Due to the absence of oxygen vacancies, these TMOs exhibit fairly distinct insulating characteristics, leading to low current density, with a Fermi level located near the middle of the bandgap: see Figure 2(a). Conversely, in TMOs with oxygen vacancies, sub-bandgap states are generated. These states trap electrons, pushing the Fermi level close to the conduction band and forming n-type materials: see Figure 2(a). Distinct band structures such as these can significantly influence the electrical properties of TMOs and determine their application in organic electronics: see Figure 2(b). 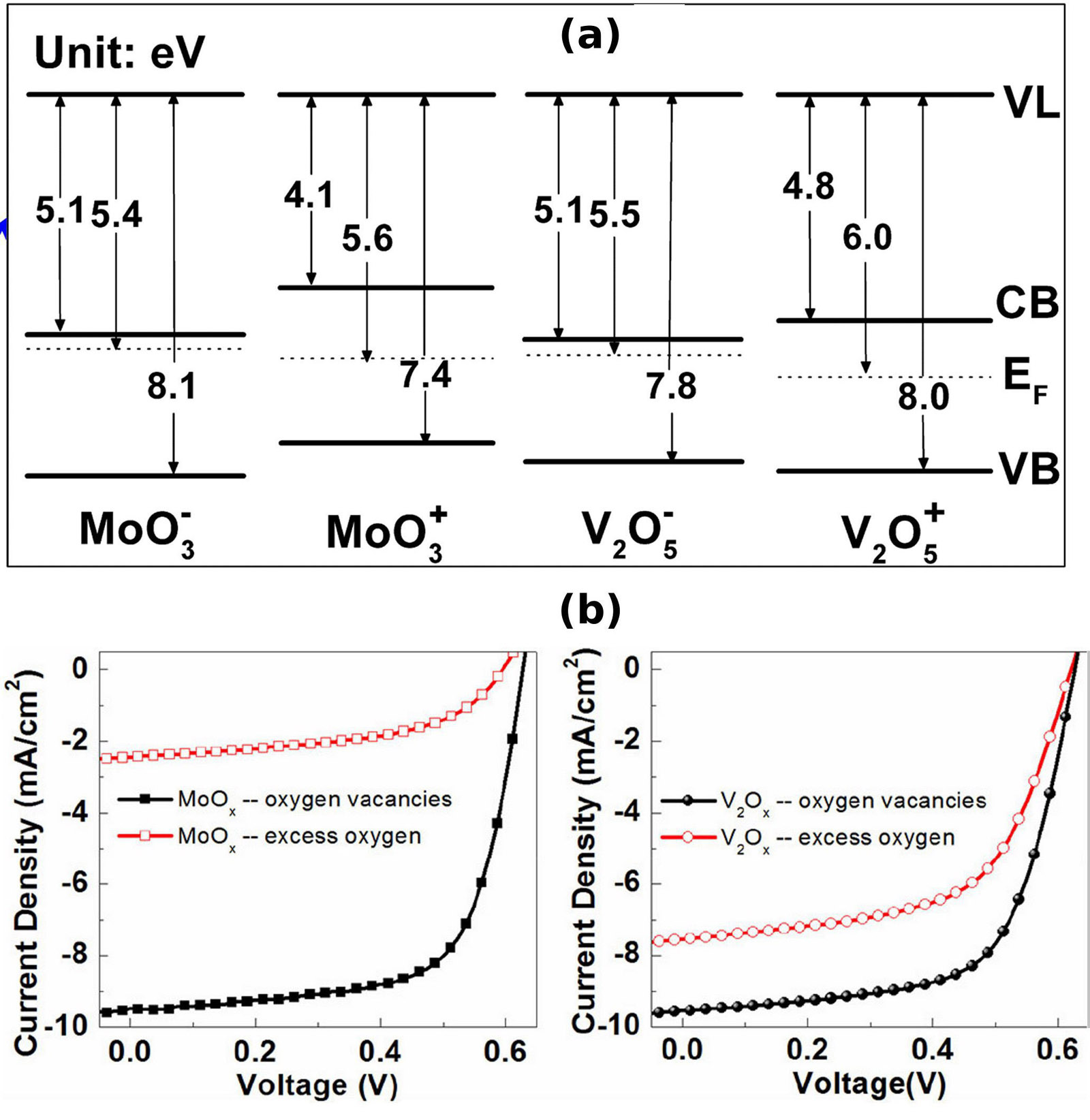 Energy level alignment can be achieved between TMOs with a wide range of work function variations and organic molecules via Fermi level pinning. This occurs when two materials (e.g., a metal oxide and organic semiconductor) make contact. Charge is redistributed between the two materials until thermal equilibrium is reached and the Fermi level is equalized. When there are many trapped electrons (‘surface traps’) concentrated at the bandgap of the metal oxide, the amount of charge required to equalize the Fermi level can be provided by these traps. Thus, the Fermi level occurs with very small displacement and is therefore stuck, or ‘pinned,’ at the trap energy level. This principle is expected to be easily applicable to TMOs with oxygen vacancies. But the insulating characteristics of those with excess oxygen are likely to inhibit charge transfer considerably, making Fermi level pinning unachievable. Moreover, the near-insulating properties of TMOs with excess oxygen are expected to result in high resistance for thin films, which will further limit their effectiveness as HTLs in organic electronics. This was strongly supported by our work: when TMOs with excess oxygen are used as HTL in P3HT:PC61BM-based OSCs, their PCEs are limited to 0.73 and 2.76%, respectively: see Figure 2.

In summary, we have developed a simple one-step method to synthesize low-temperature solution-processed TMOs of molybdenum oxide and vanadium oxide with oxygen vacancies as n-dopants for good HTLs. Importantly, the oxygen level of the TMOs can be controlled to achieve high-performance OSCs. We have demonstrated that oxygen vacancies play an essential role in TMOs employed as HTLs, showing that excess oxygen is highly undesirable for application in organic electronics. In future work, we will investigate the application of TMOs in tandem and inverted OSC architectures.

Fengxian Xie received her PhD in electrical and electronic engineering and is now a postdoctoral fellow.

Wallace C. H. Choy received his PhD in electronic engineering from the University of Surrey, UK. He subsequently worked with the National Research Council of Canada and then joined Fujitsu in San Jose, CA. He is now an associate professor.