A metamaterial to convert heat to light

Thermophotovoltaic (TPV) power generation systems recover exhaust heat from various heat sources, such as heat engines or an ironworks rolling process. An example TPV system consists of an IR solar cell and a thermal emitter as a heat–light converter: see Figure 1. The thermal emitter modifies the emission spectrum of the heat source to match the absorption spectrum of the solar cell. Ideally, the maximum emissivity will be at the wavelength at which the solar cell has its absorption maximum.

In general, the shape of a thermal radiation spectrum depends on its temperature. As the temperature increases, the radiation power increases and the peak wavelength is shifted toward the blue end of the spectrum. Additionally, artificial structures on the source can produce resonant modes to enhance the spectrum as was first proposed by Hesketh and coworkers in 1986.1Thermal radiation control by artificial structures has since been studied using open-end resonance,1, 2 surface waves,3–5 photonic bandgaps,6, 7 and cross antennas.8

The recent development of metamaterials has realized many novel phenomena such as invisibility cloaking, negative refraction, and novel optical filters.9 In these studies, light interacts with a structure that is much smaller than its own wavelength. An artificial optical material with a 3D structure and an ultra-thin film (metasurface) can behave as a homogeneous medium. Recently, metamaterial techniques have been used to design luminescence spectra of thermal emitters and so improve TPV generators' energy conversion efficiency.

Until now, TPV systems have been based on microcavity arrays and need deep (i.e., several microns) hole structures on a thick substrate. Advanced dry etching processes are required to achieve these deep-aspect-ratio microstructures and this is challenging over a wide area. In addition, there is no flexibility in such a substrate.

We have studied the control of thermal radiation spectra to develop more efficient converters and proposed a metasurface made up of split-ring resonators (SRRs) for efficient heat–light energy conversion with a remarkably low heat capacity. It is very thin (100nm), compatible with conventional planar processes, and easily expanded to make a very wide, thin and flexible substrate that can, for example, be used to patch heat engines.

Our metasurface is made up of an array of gold SRRs on a plane substrate with glass, chromium, silver, chromium, and silica layers: see Figure 2.10 To fabricate it, we used electron-beam lithography, and then deposited thin layers of chromium (3nm) and gold (80nm) by vacuum deposition. Finally, we lifted off the redundant resist. The resonant wavelength is greater than the thickness of the SRRs. Note that the silver layer blocks thermal radiation from the underlying substrate. To measure the thermal emission, we used a Fourier-transform IR spectrometer and a ceramic heater with constant electric power. 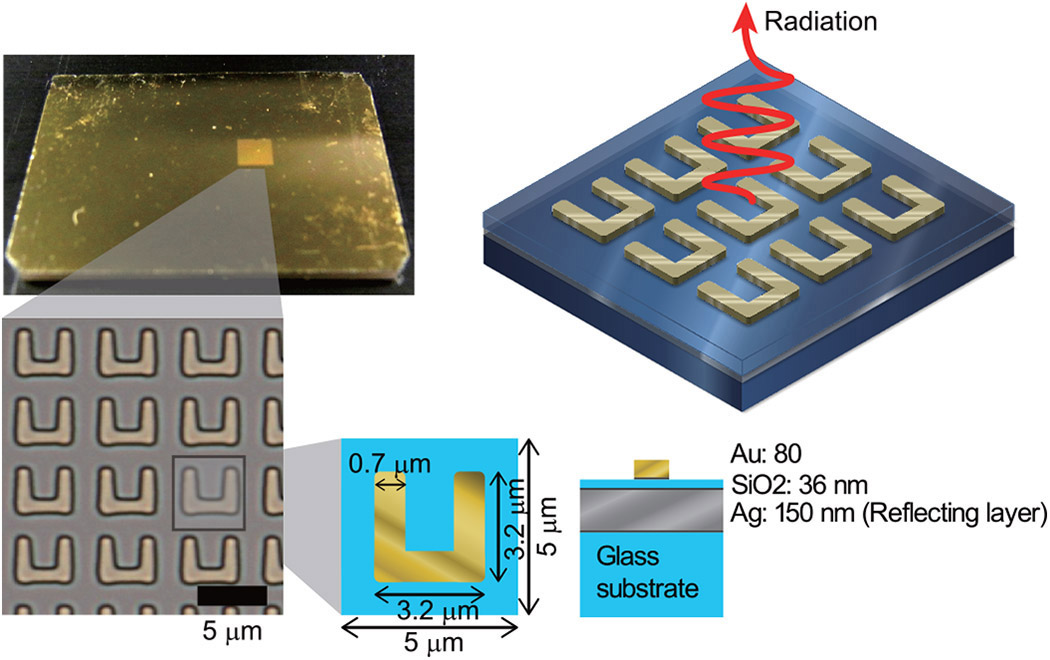 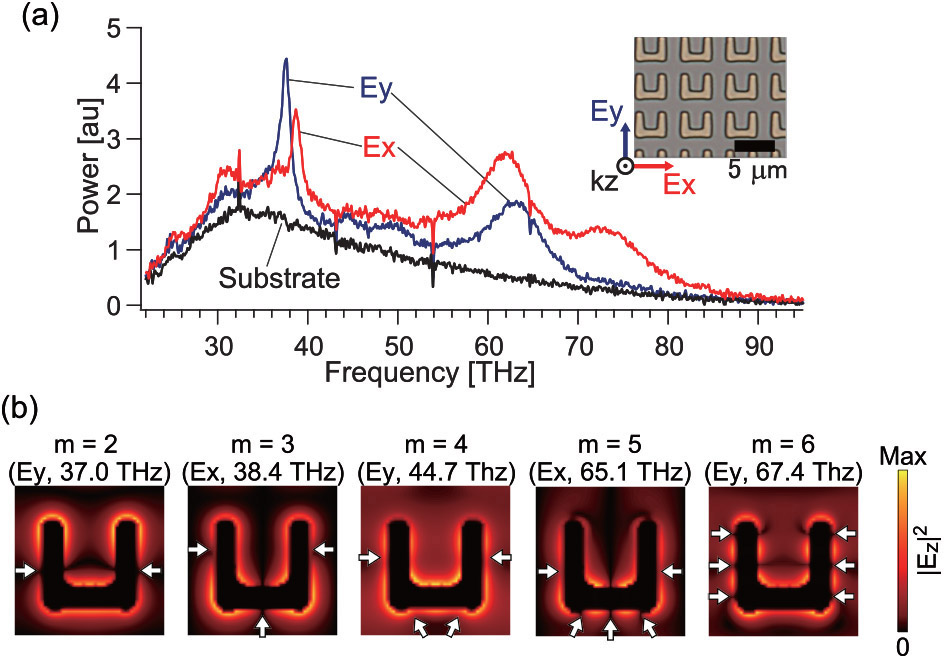 Figure 3. (a) Measured thermal radiation spectra of the SRRs and the substrate. (b) Simulated electric field distributions in the SRR structure at the peak positions in (a). Exand Ey are linear polarizations that are parallel and perpendicular to the SRR gap, respectively. kz is the direction of the radiation, which is normal to the substrate. au: Arbitrary units. m: Mode number.

Figure 3(a) shows the measured thermal radiation spectra from the SRRs and the plane substrate. The metasurface emission spectrum peaks at about 38THz and 60–80THz. The enhanced peaks from the SRR emission spectrum were about three and six times larger than the emission by the plane substrate at the same frequencies and we could also modify the peak wavelengths by changing the size of the SRRs.

We also performed a numerical simulation to obtain electric field distributions and observed the nodes attributed to the various resonant modes of an SRR: see Figure 3(b). We were able to shift the peak position by changing the resonator length and to obtain the emissivity of a blackbody at a specific wavelength by changing the gap distance between the SRR layer and the reflection layer.11This enables us to design the luminescence spectra of the metasurface thermal radiation emitter for a specific spectrum. This also enables us to realize a low-cost terahertz wave source by thermal radiation. It is difficult to fabricate by lithography a sufficiently deep, narrow microcavity to generate wavelengths as long as 100μm, as is required for terahertz radiation. However, this kind of optically-thin metasurface has great potential to realize a specific emitter for a wide range of wavelengths from terahertz to near-IR.

In summary, we have designed, constructed, and tested a metamaterial made of an array of SRRs that is an effective heat–light converter with a controllable spectrum and low heat capacity. In future work, we plan to design a metamaterial with a broad spectrum for TPV systems.

Junichi Takahara is a deputy director of PARC and a professor at GSE. His research focuses on plasmonics, metamaterials, and thermal radiation.