In metals or semiconductors, free electrons can move between atoms, giving rise to an electric current. However, high-frequency surface waves called plasmons can move by charge density oscillation of the free electrons without a net current. With a trend toward increasingly miniature devices and demand for higher information transmission speeds, interest in plasmonics is rising. Plasmonic antennas are nanoscale versions of conventional radio-frequency antennas. They work at optical frequencies where the interactions between the radiation and antennas are governed by plasmonics, and offer unprecedented capability to manipulate light-matter interaction on the nanoscale. Control of photon properties is key to a wide range of applications such as optical sensing and integrated photonic circuits, and a variety of optical antennas have previously been demonstrated to tailor the properties of photons from quantum emitters.

Most of the previously reported optical antennas aimed to control only one or two properties. However, we recently showed that comprehensive control of emissive characteristics (in terms of intensity, angular momentum, and directivity, i.e., the ability to radiate into a desired direction) can be realized by coupling emitters to a spiral plasmonic antenna.1–3 In addition, many potential applications, such as chip-to-chip and board-to-board optical interconnects, require the ability to dynamically steer the photons radiated from the emitters. We have successfully demonstrated such a capability by conveniently adjusting the feed point location of a spiral plasmonic antenna.4 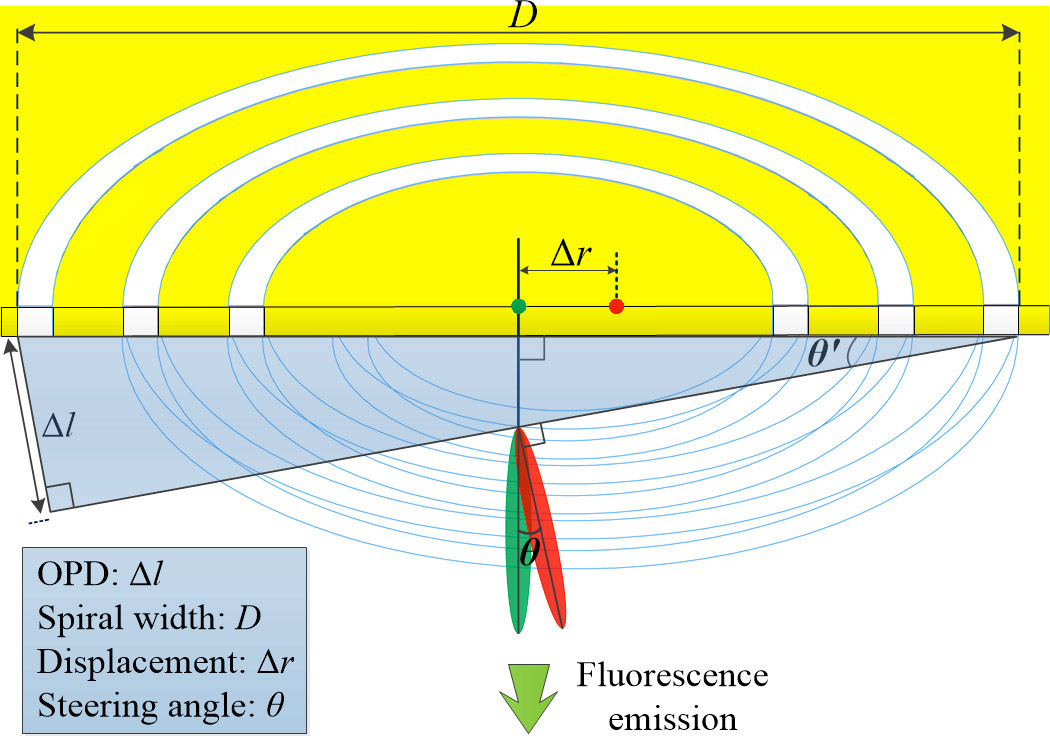 Figure 1 illustrates a simple model to understand the underlying physics of the proposed beam steering concept. For a device (in this study, a spiral plasmonic antenna) with an aperture size of D, the emission peak is normal to the surface when the emitter (optical feed) is located at the geometrical center. In this case, the optical path difference (OPD, Δl) between the two opposite sides of the aperture is assumed to be zero, and therefore there is no tilt of the overall wavefront emitted from the device. However, if the emitter is moved away from the origin with a displacement of Δr, the OPD is no longer zero. Consequently, the corresponding overall wavefront will be tilted, leading to a steering angle θ of the emission peak from the normal direction. With the help of this simple model, the steering angle can be analytically estimated as θ = sin−1(Δl/D). We have numerically modeled and experimentally demonstrated this beam steering concept.

We built a 3D finite-element-method numerical model to validate the simple analytical model. As shown in Figure 2(a), a three-turn spiral optical antenna is excited by an electric dipole (the optical feed) oscillating normal to the surface. Figure 2(b) shows the simulation results of the far-field intensity distribution when the dipole is placed at the geometrical center of the spiral. The emission is highly directional and normal to the spiral surface. When the dipole is moved away from the center, the emission peak shifts away from the normal direction as expected. As shown in Figure 2(c, d), the steering angles are 3.4 and 7.7° for the electric dipole with an x-directional displacement of 200 and 500nm, respectively. Thus dynamic control of the emission direction can be realized by changing the optical feeding point. 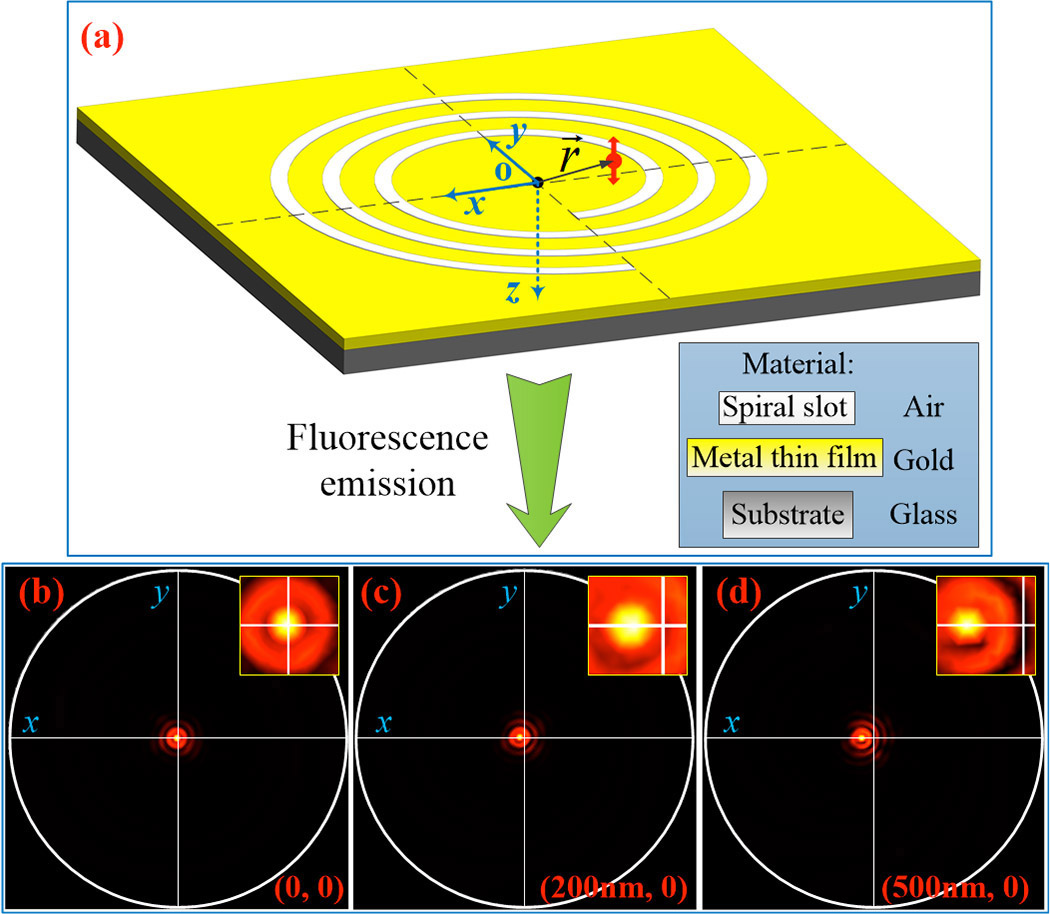 Figure 2. (a) Diagram of the spiral optical antenna used in the numerical simulation. (b–d) The oscillating direction of the electric dipole is indicated by the red arrow. Numerical simulation results for a three-turn spiral optical antenna when the electric dipole is moved along the x-direction by 0, 200, and 500nm, respectively. Insets: Close-ups of the intensity distributions showing the emission peak. The white circles represent the maximum collection angular range for an objective lens with numerical aperture (NA) of 0.8. 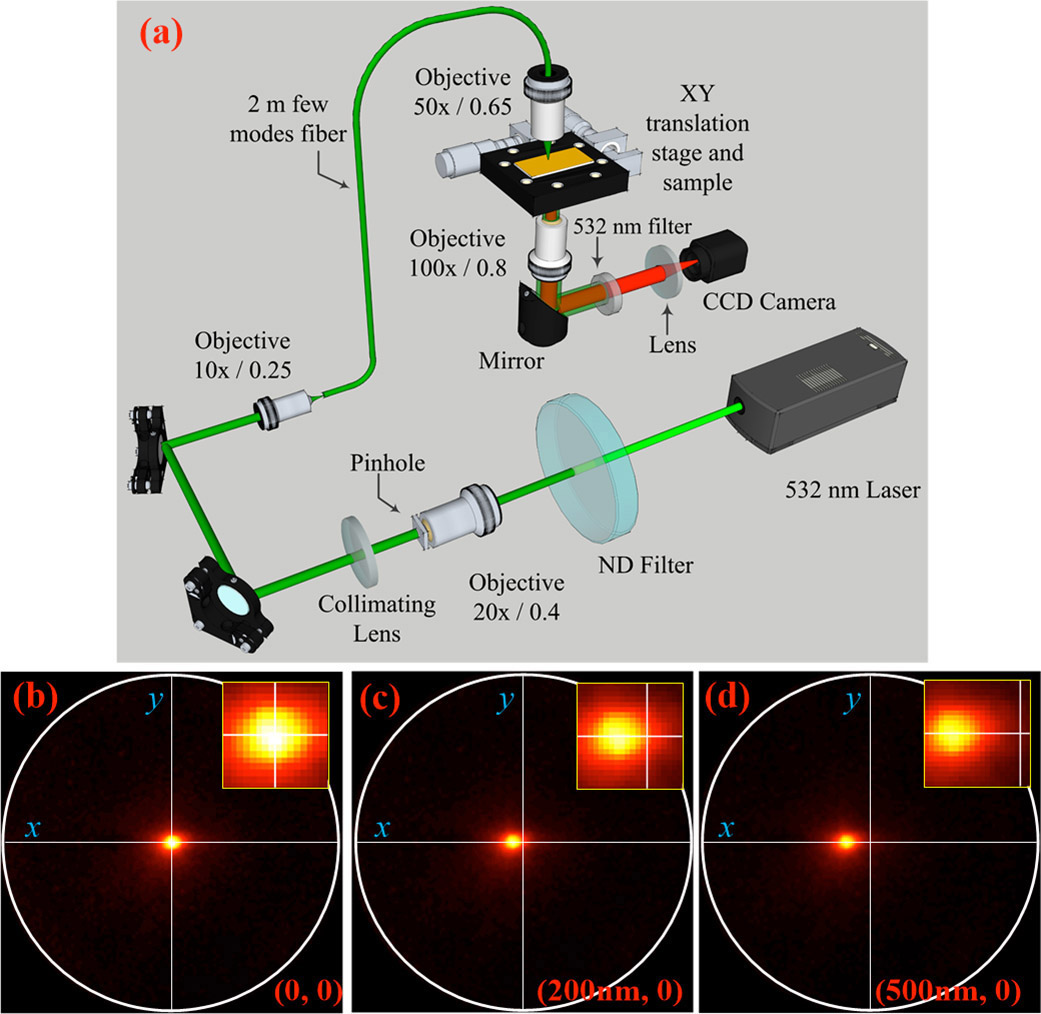 Figure 3. (a) Experimental configuration. (b–d) Fluorescence intensity distributions in the back focal plane of an objective lens when the sample is moved along the x-direction by 0, 200, and 500nm, respectively. Insets: Close-ups of the intensity distributions showing the emission peak. The white circles represent the maximum collection angular range for an objective lens with NA of 0.8. ND: Neutral density filter.

We demonstrated the beam steering concept experimentally: see Figure 3. Uniformly dispersed quantum dot solution is coated on a three-turn spiral antenna and serves as the nanoscale emitter to excite the device. To fulfill the critical requirement for the oscillating direction of the emitter, we used a highly focused radially polarized beam as the excitation. The sample is placed on a computer-controlled x-y translation stage. The position of excitation remains unchanged during the experiment, and the displacement of the feed point is realized by moving the sample to specific locations to excite quantum dots in different areas. The emitted fluorescence is collected by an inverted objective lens with a numerical aperture of 0.8.

The beam-steering phenomenon observed in the experiment confirms the numerical simulation results: see Figure 3(b–d). For displacements of 200 and 500nm, the emission peak would shift from the normal direction and the steering angles are 3 and 7°, respectively. In addition, the experimental results indicate that the emitted photons still carry the spin angular momentum determined by the chirality of the spiral optical antenna. For displacements of 200 and 500nm, circular polarization extinction ratios of 8 and 7 are achieved. By continuously moving the translation stage in a prescribed way, we were also able to dynamically steer the photon emission.

In summary, we have successfully demonstrated a beam steering concept by displacing the feed point of a spiral plasmonic antenna. The steering angle strongly depends on the position of the feed, with larger displacement leading to higher steering angle. Furthermore, the spin state of the emitted photons remains unchanged. We believe that the steerable nanoscale photon source with high brightness, high directivity, and prescribed spin angular momentum shown in this work has great potential for applications ranging from single-molecular-level optical sensing to integrated photonic circuits for spin optics and quantum information processing. Currently, we are investigating the feasibility of using optical forces arising from an integrated photonic circuit to drive and control the feed point shift required in our beam steering concept. If successful, this approach will enable us to realize a chip-scale beam steering device that can be integrated into photonic circuits.

This work was supported by the US Air Force Research Laboratory's (Materials and Manufacturing Directorate) Metamaterials Program.

Qiwen Zhan is a professor at UD. He is also the principal investigator of the Nano Electro-Optics Laboratories at UD and the managing director of the UD Fraunhofer Research Center.