Fulfilling ever-growing demand for energy has been and will be a major concern for many countries around the world. Solar cells, which harness abundant sunlight and convert solar energy into electricity, provide a sustainable and clean way to meet future energy needs. The flexibility and low-cost processing requirements of organic materials make organic solar cells (OSCs) stand out among various photovoltaic designs as offering a much wider range of applications at lower cost than their inorganic counterparts.

In OSCs, light is absorbed by a layer of organic material (the active layer), where mobile charge carriers (electrons and holes) are generated from the dissociation of photoexcited excitons. The efficient extraction of carriers from the active layer to their respective electrodes, however, usually requires a highly conductive buffer layer inserted in between. At present, relatively low light absorption by OSCs puts them at a significant disadvantage to inorganic solar cells. OSC light harvesting needs to be improved, and various light-trapping techniques have been developed recently.

Researchers have introduced plasmonic metal nanostructures into the active layer and highly conductive buffer layer. These have multiple effects on the structure and operation of OSCs. There are optical effects,1–5 material effects on the morphology and electrical conduction of the devices,1, 2,6–8 and also electrical effects directly induced by the optical plasmonic resonances, called plasmonic-electrical effects. These last include plasmon-induced (electrical) carrier generation and a change of carrier extraction properties on charge transport layers. They affect the operation and performance of OSCs but have not yet been studied in depth.9

The best-performing OSCs have an inverted single junction with a plasmonic-electrical titanium dioxide (TiO2) electron transport layer and reach a power conversion efficiency (PCE) of 8.74%: see Figure 1. Interestingly, these highly efficient OSCs absorb light at a plasmonic excitation wavelength far longer than the 400nm UV light absorbed by pristine TiO2, and their performance is also better.9 It is well known that electron states in TiO2 need to be filled by electrons from carrier excitation (bandgap about 3.0–3.3eV),10 typically by UV irradiation, to provide favorable electron transport. 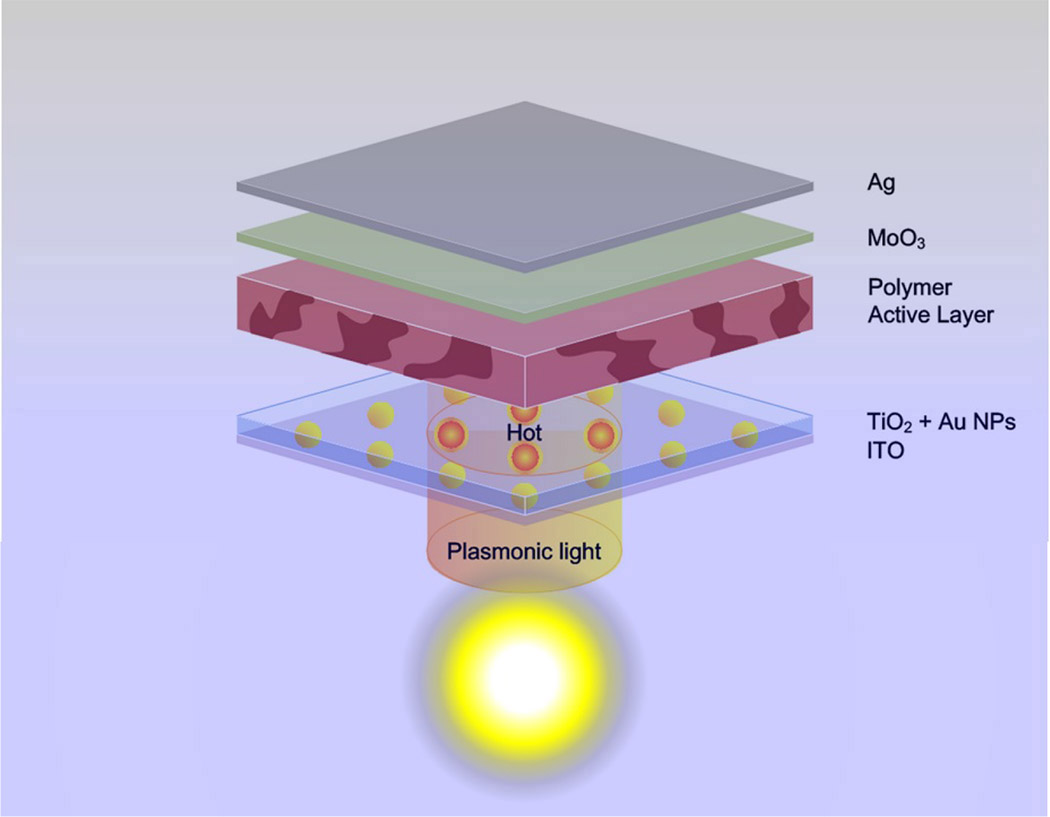 We explored the contribution of plasmonic-electrical effects by incorporating gold (Au) nanoparticles (NPs) into the TiO2-based electron transport layer and measuring the behavior of devices illuminated by light of different wavelengths. We found that the increased and extended operability of NP-doped TiO2 OSCs at visible wavelengths well below the UV region is closely related to the injection of plasmonically excited hot carriers (electrons) from metal NPs into TiO2.

As well as experimental studies, we considered an integrated optical and electrical model,9, 11,12 which takes into account the hot carrier tunneling probability and the extraction barrier between the TiO2 and active layers. Both the theoretical and experimental results show that the contributions of metal NPs in the TiO2 of OSCs are the plasmonically generated hot carriers and enhanced charge extraction of TiO2, which activate effective device operation at plasmonic wavelengths far below the bandgap of TiO2 in the UV region.9

Although there have been studies on the effects of plasmonically excited metal NPs in the metal-semiconductor nanostructures, the explanation is still inconclusive. Some studies indicate that the photocatalytic or photocurrent enhancement is induced by hot carrier injection from the plasmonically excited metal NPs into the semiconductor.13–16 However, some other studies report that the improvement of photocatalytic activity in the visible range is caused by the local electric field enhancement near the TiO2 surface, rather than by the direct transfer of charges between the NPs and TiO2.17

Based on our work, we propose that it is the charge transfer process of plasmonically excited electrons from metal NPs to TiO2, rather than the induced field effect near the TiO2 surface, that is responsible for these improvements: see Figure 2. Under plasmonic (wavelength) light irradiation, the transferred plasmonically excited electrons from Au NPs to TiO2 can achieve trap filling in the TiO2 layer, reducing the effective extraction barrier, resistance, and charge recombination, which enhances electron extraction. 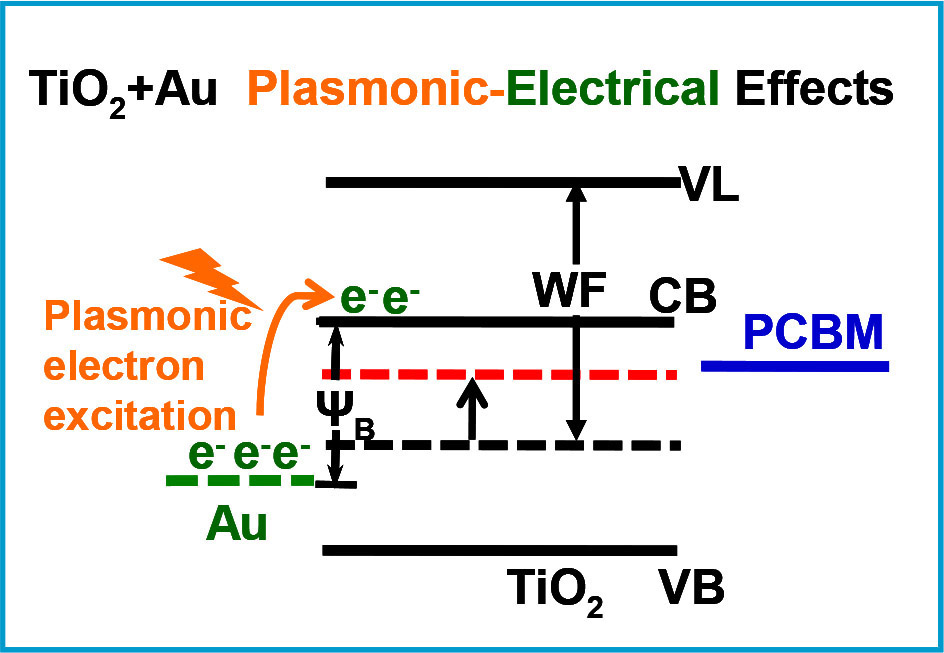 This physical understanding points to a new approach of using plasmonic nanostructures in OSCs to enhance device performance. TiO2 can be used as an electron transport layer in organic LEDs and OSCs, so our work also contributes to enabling efficient organic optoelectronic devices with practical applications. In the future, we plan to explore other electrical and optical effects of plasmonic nanostructures on a variety of photovoltaic devices.

Wallace C. H. Choy received his PhD in electronic engineering from the University of Surrey, UK. He subsequently worked for the National Research Council of Canada before joining Fujitsu at San Jose, CA. He is now an associate professor.