Searching for evidence of cosmic inflation

A balloon-borne telescope with multiple-band sensors aims to detect polarized radiation from the early days of the Universe.

The Cosmic Microwave Background (CMB), the 2.7 Kelvin relic radiation from 380,000 years after the Big Bang, carries a trove of information about the Universe, including clues to its age, content, and history. Despite considerable work done based on precise measurements of the CMB's all-encompassing glow, questions remain, in particular, how did the structure we see in the Universe today originate? The pre-eminent theory is cosmic inflation, during which the the volume of the Universe increased by a factor of 1078 in the first 10−34 seconds after the Big Bang. In the process, minute quantum fluctuations were magnified to macroscopic sizes that then interacted gravitationally as the Universe continued on its normal Big Bang-driven expansion.1

Inflation provides a compelling theoretical framework, making predictions for observable consequences. The clearest evidence would be a measurement of so-called B-mode or curl-type polarization in the CMB2 at large angular scales on the sky. The CMB is partially polarized at the level of roughly 10 parts per million. However, most of this is in the form of ‘E-mode’ polarization, a curl-free pattern brought about by density fluctuations in the early Universe (see Figure 1). Recently, the South Pole Telescope team detected evidence for B modes at small angular scales created from the deflection of E-mode-polarized light by matter in the Universe.3 However, identifying primordial B modes coming from inflation remains a challenge, and current upper limits put the level of these at less than 100 parts per billion relative to the total intensity of the CMB. 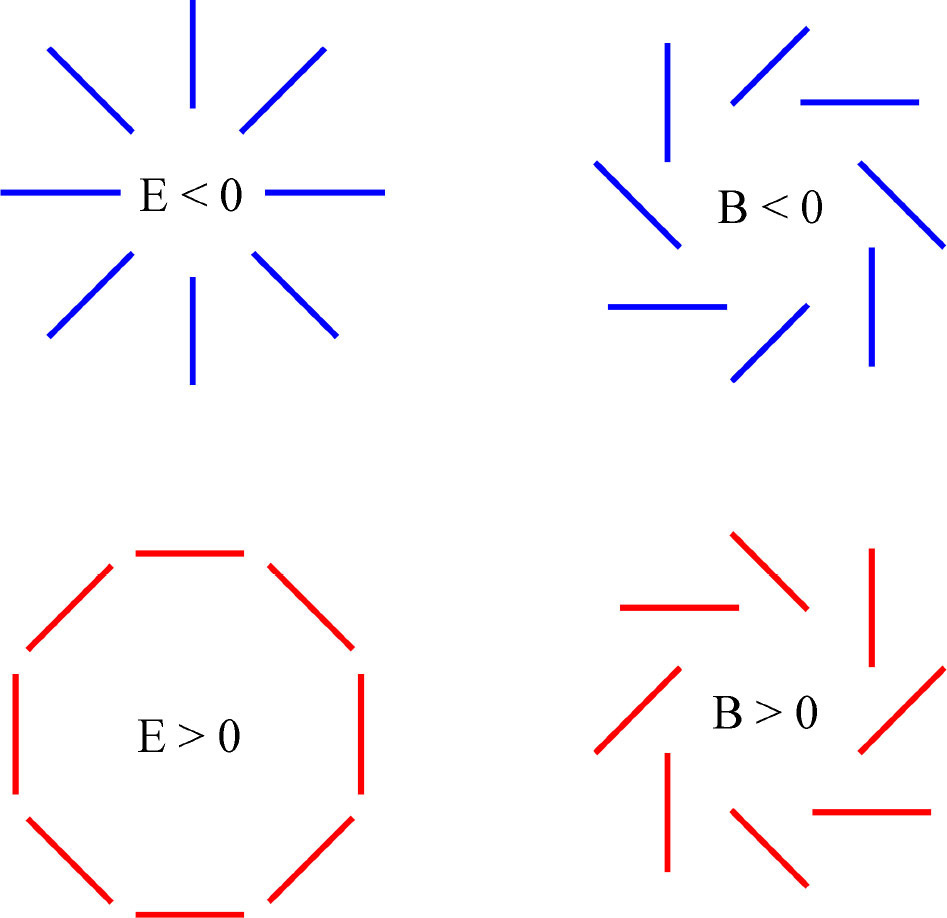 We designed the E and B Experiment (EBEX), a balloon-borne millimeter-wave polarimeter designed to measure both E- and B-mode CMB polarization.4 To meet sensitivity requirements, the instrument uses approximately 1000 transition-edge-sensor (TES) bolometric detectors operating at 0.27K that observe in multiple bands centered at 150, 250, and 410GHz. The detectors are coupled to the sky using an off-axis reflecting telescope providing 8 arcminute resolution. The detector arrays seen in Figure 2 are read by a frequency-domain-multiplexed (fMUX) readout system. This uses only two wires to read out the signal from 16 detectors (‘×16’ multiplexing), thus reducing the number of wires entering the receiver.5 The telescope is suspended from a stratospheric balloon to maximize the instantaneous sensitivity of the detectors and to observe at frequencies (>300GHz) that are inaccessible from the ground due to atmospheric absorption. These high-frequency observations will then help us understand the effects of millimeter-wave emission from dust in our own galaxy. Figure 3 shows the payload prior to launch. 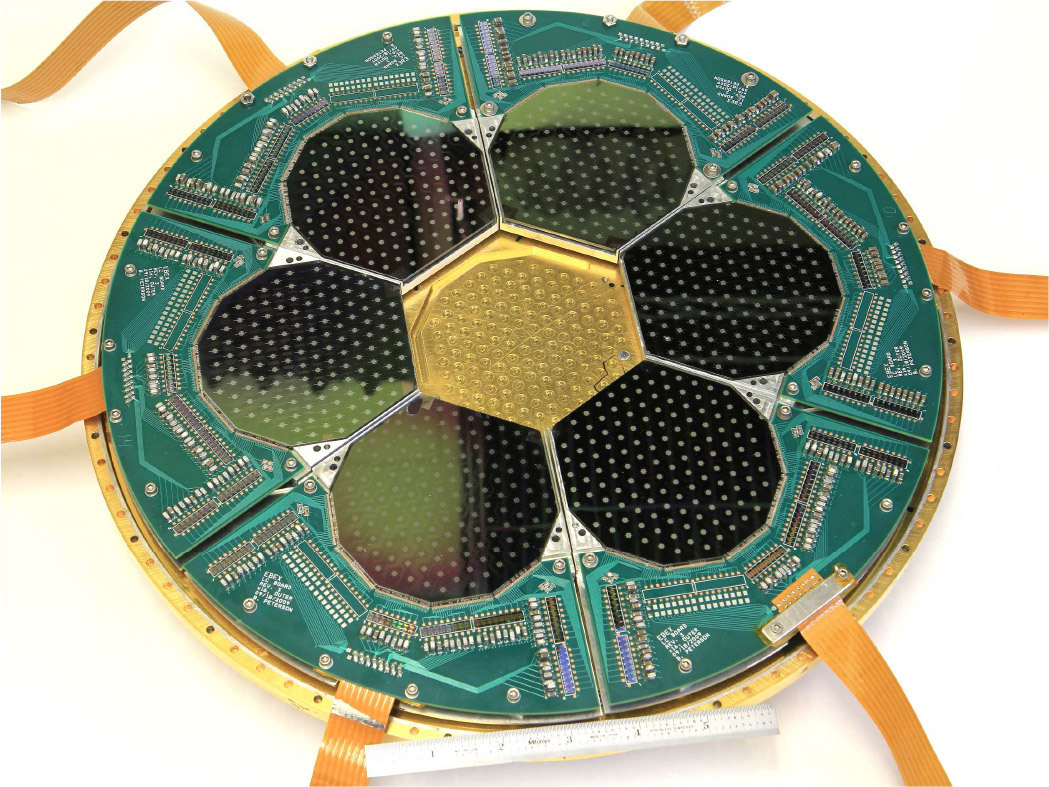 Figure 2. One of the E and B experiment (EBEX) telescope's two focal planes, shown here partially filled. Transmission-edge-sensor bolometers (white dots) are fabricated photolithographically on silicon wafers (black decagons). The detectors are biased and read out via electronics boards (green) at the perimeter. The central detector wafer and electronics board have been removed in this photograph for clarity. A 6” ruler at the bottom gives scale. 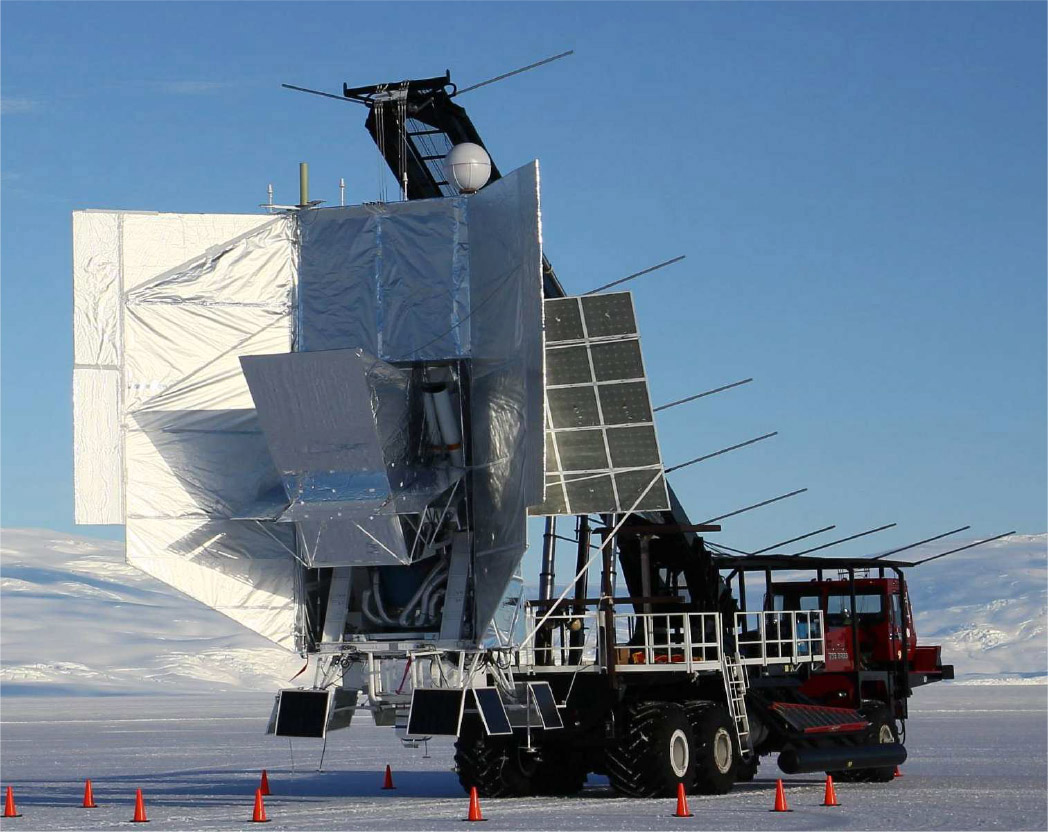 Figure 3. The EBEX payload hangs from the launch vehicle prior to launch. The aluminized-mylar-covered structure baffles the telescope from stray light coming from the sun and ground. The entire payload is roughly 7.5m high and weighs 2750kg.

To mitigate polarimetric systematic effects, a continuously rotating half-waveplate modulates polarization of the incoming light. EBEX uses an achromatic half-waveplate (AHWP), a stack of five single waveplates with prescribed orientation angles relative to each other, which operates across the broad instrumental bandwidth.6 Supporting the AHWP is a superconducting magnetic bearing (SMB) at 4K that allows low-friction rotation, thus enabling a long (˜10-day) liquid helium hold time for the EBEX cryogenic receiver.

We had to develop several new technologies for EBEX. We optimized the TES arrays for the low atmospheric photon noise environment of a stratospheric balloon payload.7 The experiment required a new readout system for TES arrays that consumes 10% of the power of previous versions, enabling its use on a balloon platform.5 The EBEX team also adapted the SMB technology for astrophysical polarimetry.8

We launched EBEX near McMurdo Station, Antarctica, on 29 December 2012 and observed for 11 days at altitudes of roughly 33 to 36km. Over the course of the flight, the telescope observed approximately 6000 square degrees of the southern sky. We achieved a number of immediate successes during this flight, including the first use of TES bolometer arrays for science observations on a balloon platform, the first observations with a ×16 fMUX system, successful autonomous remote tuning of our detector and readout systems, and first use of an SMB for astrophysical polarimetry, all of which increase the technology readiness level for use in a future space mission. We recovered the data disks, along with much of the other hardware, after the flight was terminated, and the team is currently analyzing the data. We have already identified signals coming from our own galaxy (see Figure 4). 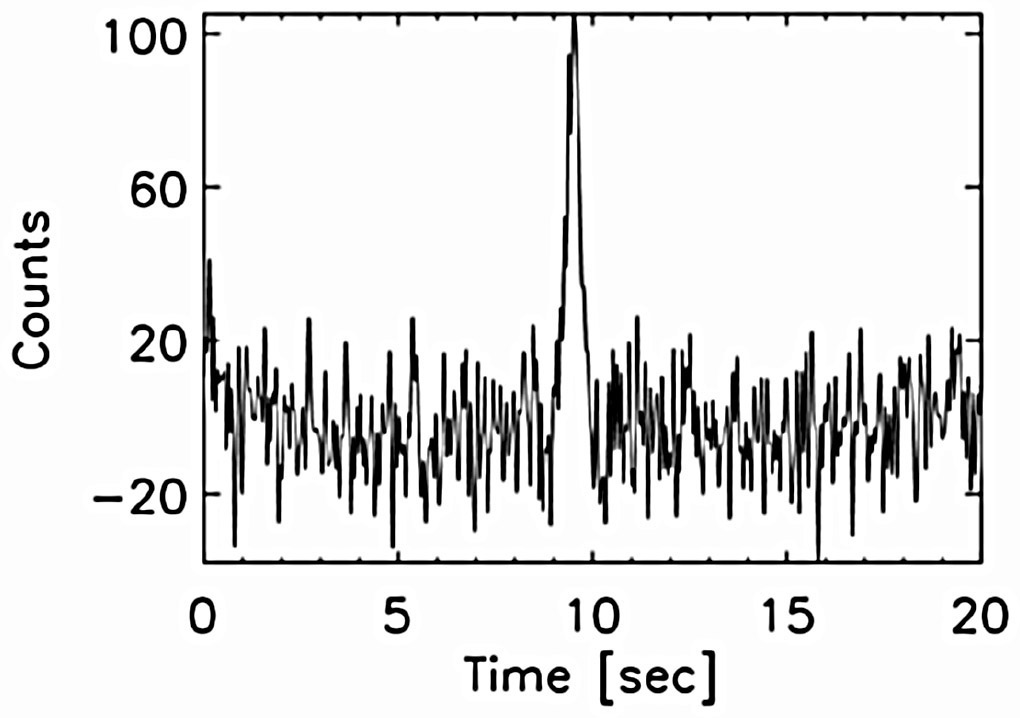 Figure 4. Timestream of galaxy crossing as measured in one EBEX detector.

In future, we plan to upgrade the EBEX receiver with new technology that would allow the use of approximately 6000 detectors read out with an upgraded ×64 multiplexing system. This increase results in a gain of ×3 in raw sensitivity, allowing this next-generation instrument, called EBEX6K, to probe for even smaller potential B-mode signals. We plan to field EBEX6K in a long-duration campaign in 2016.

Asad Aboobaker is a research associate in the School of Physics and Astronomy. He received his PhD in physics from Princeton University in 2006.