The missing link in optical fabrication and testing software

X-ray and UV imaging instruments on weather satellites, extreme-UV (EUV) lithography, and other short-wavelength applications often suffer from surface scatter effects due to residual optical fabrication errors. Such surface scatter, rather than geometrical aberrations or diffraction effects, may limit the performance of imaging systems. Taking surface scatter effects into account when predicting image quality is a two-step process. First, one must be able to predict the scattered light behavior, or bidirectional reflectance distribution function (BRDF), from measured (or assumed) surface metrology data. Second, one must be able to calculate the image degradation from that scattered light behavior. Several commercially available optical design and analysis codes (ZEMAX, Code V, ASAP, and FRED) have demonstrated the ability to predict image degradation if the BRDF is provided as input. But experimental BRDF data is rarely available, and is difficult to measure at these short wavelengths. Moreover, the commercially available codes currently can only calculate the BRDF from surface metrology data for surfaces that satisfy the smooth-surface criterion. The generalized Harvey-Shack (GHS) surface scatter theory allows one to calculate this necessary scattering behavior (the BRDF) from the surface metrology data obtained during the optical fabrication process.1, 2

The classical Rayleigh-Rice surface scatter theory (1951) is a rigorous vector treatment valid for large incident and scattered angles. However, it uses a perturbation technique with an explicit smooth-surface approximation.3, 4 The classical Beckmann-Kirchhoff surface scatter theory (1963) is valid for rougher surfaces, but it has an inherent paraxial or small-angle limitation.5 Harvey and Shack (1976) developed a linear systems formulation of surface scatter phenomena in which the scattering behavior is characterized by a surface transfer function.6, 7 This treatment provided insight and understanding not readily gleaned from the previous two theories. However, it suffered from the same paraxial limitations as the Beckmann-Kirchhoff theory. Krywonos and Harvey developed a linear systems formulation of nonparaxial scalar diffraction theory (1999) in which diffracted radiance (not intensity or irradiance) is the fundamental quantity that exhibits shift-invariant behavior in direction cosine space.8–11 This led to the development of GHS surface scatter theory, which combines the advantages of the classical Rayleigh-Rice and Beckmann-Kirchhoff theories. It appears to be valid for moderately rough surfaces even at large incident and scattered angles.1,2

is required to characterize the scattering behavior of a mirror surface for arbitrary incident and scattering angles. That is, a separate surface transfer function is required for each incident angle and each scattering angle.1, 2,6 Equation 1 uses a scaled coordinate system in which the spatial variables are normalized by the wavelength of the light (

, and so forth). The reciprocal variables α, β, and γ are thus the direction cosines of the propagation vectors of the angular spectrum of plane waves discussed by Ratcliff,12 Goodman,13 and Gaskill.14 The variables γi and γs are the cosines of the incident and the scattered angles, respectively (γi= cos θi and γs= cos θs),

is the surface autocovariance (ACV) function, σrel is the bandlimited relevant rms roughness,15 and σs is the total rms roughness.2 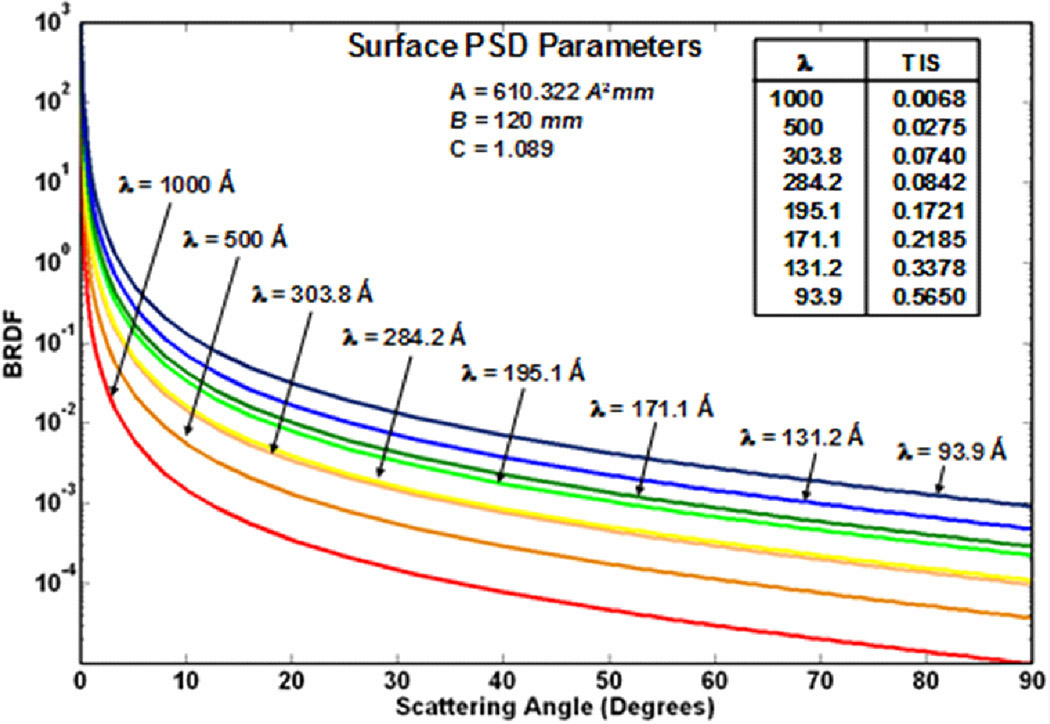 It often takes three or even four different metrology instruments to measure the surface characteristics over the entire range of relevant spatial frequencies for a given application. Figure 1 shows metrology data taken from a full-aperture interferometer, a micro phase-measuring interferometer (μPMI) with a 2.5× objective, a μPMI with a 50× objective, and finally an atomic force microscope. Note the seven decades of dynamic range in spatial frequency (D=10cm, λ=100Å).

The ABC, or K-correlation function, expressed in Equation 2 has been fit to the experimental metrology data to characterize the surface over the entire range of relevant spatial frequencies for a 10cm-diameter EUV (λ=100Å) system: from the low-spatial-frequency figure errors, through the mid-spatial-frequency surface irregularities that produce small-angle scatter and including the high-spatial-frequency micro-roughness that produces wide-angle scatter. Surface roughness with a spatial frequency greater than 1/λ is irrelevant as it does not scatter light. Likewise, surface roughness with a spatial frequency less than the reciprocal of the aperture diameter does not significantly degrade image quality, as the scattering angle is so small that negligible radiant power is scattered out of the Airy disk.

This function has several useful properties. The 2D surface power spectral density (PSD) (assuming isotropic roughness), the total volume under the 2D surface PSD, and the surface ACV function can all be expressed analytically in terms of the three ABC parameters.15,16

To calculate the BRDF from surface metrology data, we Fourier transformed the surface transfer function and multiplied the reflectance of the surface

Note that we have quasi-vectorized our scalar treatment of surface scatter phenomena by substituting the polarization reflectance, Q, for the scalar reflectance, R.2

is the symbolic notation for the Fourier transform operation.

Recall that the surface ACV function and the surface PSD function constitute a Fourier transform pair. We thus use the special properties of the ABC function in Equation 2 to obtain an analytical expression for the surface ACV function necessary to insert into Equation 1. We then calculate the BRDF one point at a time by choosing an incident and a scattering angle, and then by performing the Fourier transform operation indicated symbolically in Equation 1. We then extract the one point in the resulting 2D function that corresponds to the values of γi and γs that were set to a constant prior to performing the Fourier transform operation. This has to be repeated for each incident and scattered angle for which we wish to calculate the BRDF.

Figure 2 illustrates BRDF profiles calculated from the surface metrology data shown in Figure 1 for several increasingly short wavelengths throughout the UV and EUV. Note that for the shortest EUV wavelength, more than 50% of the reflected radiation is scattered out of the specular beam.

Using this BRDF data as input, we were able to make and compare detailed image quality predictions for a two-mirror EUV telescope from several image analysis codes.18 Our results validated both the FFTLog algorithm used for predicting the BRDFs from surface metrology data over a large dynamic range of relevant spatial frequencies and the generalized Peterson analytical treatment of infield stray light in multi-element imaging systems.

From the above discussion, we can see how GHS surface scatter theory is the missing link in optical fabrication/testing software that enables the derivation of optical fabrication tolerances (using assumed metrology data in the design phase of a program) necessary to meet specific image quality requirements. The same software could be used during the actual fabrication/testing process (using actual metrology data) to determine when to stop the fabrication process, with a high confidence that the requirements will be met.

Our next steps will incorporate GHS surface scatter theory into one or more of the commercially available software packages so that accurate stray light analysis can be performed even for short-wavelength applications, as well as for imaging systems whose mirrors are fabricated by unconventional optical fabrication processes such as diamond turning.

James E. Harvey is a senior optical engineer with Photon Engineering and a retired professor from CREOL: the College of Optics and Photonics at the University of Central Florida. He is also a long-time SPIE member, Fellow, and former board member who has chaired several SPIE conferences and participated in numerous SPIE committees. He is credited with over 200 publications and conference presentations in the area of optical engineering.