Auger effect identified as main cause of efficiency droop in LEDs

LEDs emit light when current-injected electron-hole (e-h) pairs recombine by emitting photons: see Figure 1(a) and (b). One measure of an LED's emission efficiency is the external quantum efficiency, which is given by ηEQE = ηinjηIQEηext, where ηinj is the efficiency of carrier injection into the LED quantum wells (QWs), ηIQE is the internal quantum efficiency (the number of photons emitted within the device per carrier injected into the active layer), and ηext is the extraction efficiency (ratio of external photons to internally emitted photons).

Figure 1. (a) Schematic of an LED under current injection. (b) Electrons and holes recombine radiatively in the quantum wells (QWs) by emitting photons. (c) In the Auger effect, an electron-hole pair recombines without emitting a photon by exciting another electron to a high kinetic energy. In: Indium. GaN: Gallium nitride.

Droop mainly occurs because ηIQE decreases with increasing current density. This effect can be seen from the expression

Due to its effect on LED performance and cost, efficiency droop has been widely researched with various mechanisms proposed, including carrier localization/delocalization caused by materials fluctuations in the active layer, insufficient capture of electrons by QWs, and electron overflow from QWs. The Auger effect, with f(n) being n3, was first invoked as the cause of droop by researchers at Philips Lumileds.1 As shown in Figure 1(c), instead of emitting a photon, an e-h pair recombines by exciting another electron, the ‘Auger’ electron, transferring kinetic energy to it, which is later dissipated as heat. Additionally, this electron escapes from the QW, leading to current leakage.2

Until now, evidence of Auger recombination has been circumstantial, based on its expected effects on carrier lifetime and LED efficiency.1 Several alternative mechanisms have been invoked, also based on circumstantial evidence and partial curing effects obtained by changed LED structure designs. These curing effects occur when modifications in LED designs lead to lower carrier densities for a given high current (and therefore result in higher efficiency), such as an increase in active layer thickness3 and decreased quantum barrier thickness, thus realizing more ‘active’ QWs in the typical multi-QW stack used in LEDs. However, independent of the droop mechanism invoked, Auger or others, such improvement would always be expected to appear because of the nonlinear effects of carrier density on quantum efficiency. Therefore, any design that diminishes carrier density will improve efficiency and cannot be used to identify the droop mechanism. Consequently, the origin of the droop phenomenon is still being hotly debated.

On the theory side, Van de Walle and coworkers have provided theoretical backing to the Auger hypothesis by showing that the indirect, phonon-assisted Auger process can be of the right magnitude.4 It has also been calculated that, for a given Auger recombination coefficient, the effective Auger recombination rate observed as efficiency droop could be enhanced at a given average carrier density by carrier localization5, 6 and current crowding,7 and by current leakage induced by Auger electrons.2 However, theory and modeling, while providing credibility for the Auger hypothesis, are not precise enough to be a decisive argument.

We decided to seek direct evidence of the Auger effect by detecting the energetic Auger electrons. We measured the energy spectrum of electrons emitted from an LED into vacuum, in an experiment reminiscent of the photoelectric effect. These measurements told us the energy of electrons inside the LED because the electrons' kinetic energy is unchanged when they escape in vacuum.

The general setup of our experiment8,9 is shown in Figure 2, with details of processes occurring inside the LED depicted in Figure 3. We electrically injected carriers in the LED structure. Auger electrons were generated in QWs. Electrons with various energies traveled toward the surface and were emitted into vacuum. Measuring the energy of these emitted electrons gave evidence of generation of Auger electrons, provided that they retained a significant fraction of their initial excess energy when reaching the surface. Indeed, we observed high-energy electrons emitted in the vacuum when we increased the LED current to droop conditions (see Figure 4). 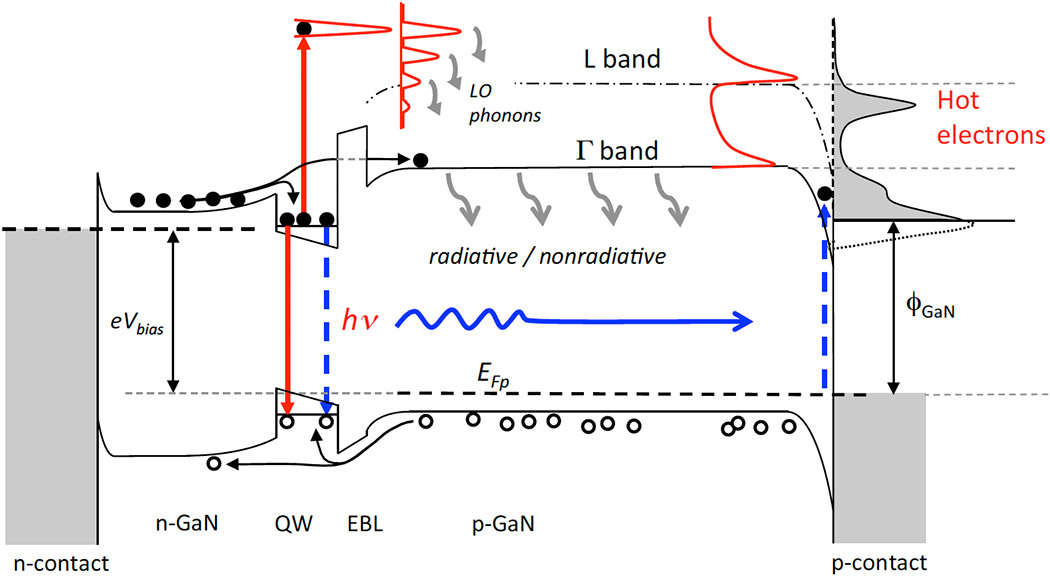 Figure 3. Energy-level diagram of hot electron emission from an LED. Hot Auger electrons are generated (upward red arrow) in the QW and some of them propagate from there toward the surface (right-hand side of diagram). Along with relaxation in the main conduction band (Γ)—by emitting longitudinal optical (LO) phonons—a fraction of these hot electrons are transferred to another ‘L’ conduction band and further propagate to the surface while remaining in that band. These electrons produce a high-energy L-band peak in the energy distribution of electrons emitted in vacuum. Lower energy Γ-band peaks are due to thermalized electrons in the Γband (intermediate peak) or to electrons photoexcited (upward dashed blue arrow) at the surface in the Γband by the LED light (lower energy peak). e: Electron charge. EFp: Fermi level of p region. φGaN: GaN work function. EBL: Electron barrier layer. 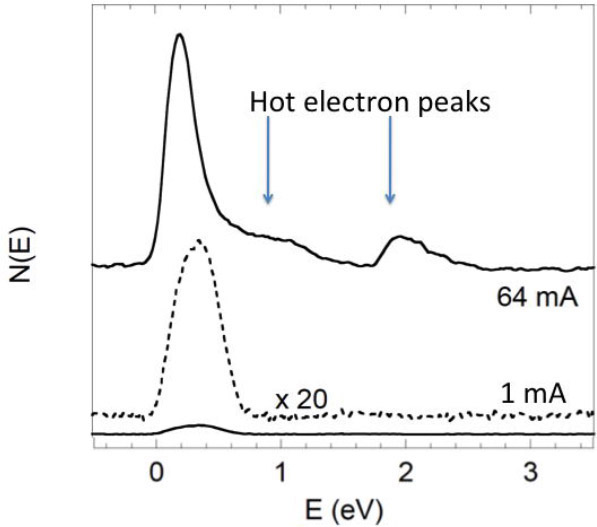 Figure 4. Kinetic energy (E) distribution curves of emitted electrons for two injection currents (the baselines of the spectra are shifted). At high current, a high-energy peak around 2eV signals generation of hot carriers in the LED.

These energetic electrons can only be Auger electrons. They have lost some kinetic energy while traveling toward the surface, but have cascaded down in a ‘side’ L conduction band (see Figure 3) from which they are emitted in vacuum. The structure has no other possible source of hot electrons: the hot electrons could not have been generated by high electric fields because those are present in the LED only at the surface, and such fields cannot raise electrons above the level of the bulk conduction band. A band discontinuity could not launch hot ballistic electrons because there is no band discontinuity in the eV range in the device.9 Absorption of LED light by free carriers in the structure could not produce the observed results because such carriers are not numerous enough and their absorption coefficient is too small.9

A particularly significant feature is that the Auger peaks occur simultaneously with the droop, showing a linear relation between the Auger current and the droop current (see Figure 5). The implicit variable in the graph in Figure 5 (right) is the electron density. Droop mechanisms other than Auger would have a different functional dependence on the carrier density,9–11 so one can have such a linear relation only if the Auger effect dominates the droop current.

Figure 5. Left: Plots of the integrated current for high-energy (▴) and low-energy (▾) electron peaks, and the LED's optical output power (◯), all as a function of the injected current. The straight line is the expected optical output power without droop, extrapolated from the current of peak emission efficiency. The ‘missing current’ indicates how much of the injected current has seemingly been lost at a given light output level. Right: Dependence of the integrated current of the high-energy peak on the missing current. The linear relation is a clear signature that the Auger effect is the dominant mechanism causing the droop current. Arb.: Arbitrary.

In summary, we measured high-energy electrons emitted from an LED into vacuum, which represent a clear signature of Auger electrons, thus confirming the long-sought mechanism of droop. More generally, this measurement is the first direct observation of Auger electrons produced by carrier recombination in a semiconductor, which is a limiting factor also for telecommunications lasers and ultrahigh-concentration solar cells.

Now that we have a tool to directly measure Auger recombination, we will test the origin of the ‘residual’ droop that still exists after efficient measures have been implemented to counteract droop. We will also use the techniques we have developed to test features of some basic building blocks of LEDs. We hope to illuminate the limitations connected with issues such as carrier capture in quantum wells, and quantum barrier effectiveness in multiple quantum wells or electron blocking layers.

Identification of the cause of droop in LEDs has been a key goal of the Center for Energy Efficient Material's research program at the University of California, Santa Barbara (UCSB), an Energy Frontier Research Center funded by the US Department of Energy, Office of Science, Office of Basic Energy Sciences, under Award No. DE-SC0001009.

Claude Weisbuch is a professor in the Materials Department at UCSB and a directeur de recherches (emeritus) at Laboratoire de Physique de la Matière Condensée, CNRS-École Polytechnique. His research is on microcavity and photonic-crystal LEDs, and more recently on LED droop phenomena.

Claude Weisbuch is a professor in the Materials Department at UCSB and a directeur de recherches (emeritus) at Laboratoire de Physique de la Matière Condensée, CNRS-École Polytechnique. His research is on microcavity and photonic-crystal LEDs, and more recently on LED droop phenomena.