An approach that describes the aberration fields of displaced optics provides a step toward an unrestricted aberration theory for nonsymmetric imaging optics with freeform surfaces.
11 November 2013
Kyle Fuerschbach, Jannick Rolland and Kevin Thompson

Freeform optical surfaces are creating exciting new opportunities in mathematics, mechanics, and optics for design, fabrication, assembly, and testing.1 While the term ‘freeform’ is currently applied to a broad range of surface shapes, in our research on imaging, a freeform is a surface whose sag varies with the radial and azimuthal (ϕ) components, and is neither off-axis conic, aspheric, nor purely anamorphic. Our latest research is based on this specific class of ϕ-polynomial surfaces, which enables innovative package geometries, as size and weight are increasingly driving constraints in designing optical systems for imaging applications.

In developing new 3D packages for imaging optical systems, we often break the rotational symmetry through tilts and decenters that degrade the imaging performance. Using freeform surfaces can directly compensate the resulting aberrations. To optimize the shapes of these surfaces, we must first understand the aberration effect they induce. A foundation that describes how the fields evolve when symmetry no longer exists is nodal aberration theory (NAT), discovered by Roland Shack2 and developed by Kevin Thompson.3 However, NAT has been limited to optical imaging systems made of rotationally symmetric components that are tilted and/or decentered. Our research presents a path to extend NAT to describe the aberration fields of freeform surfaces. 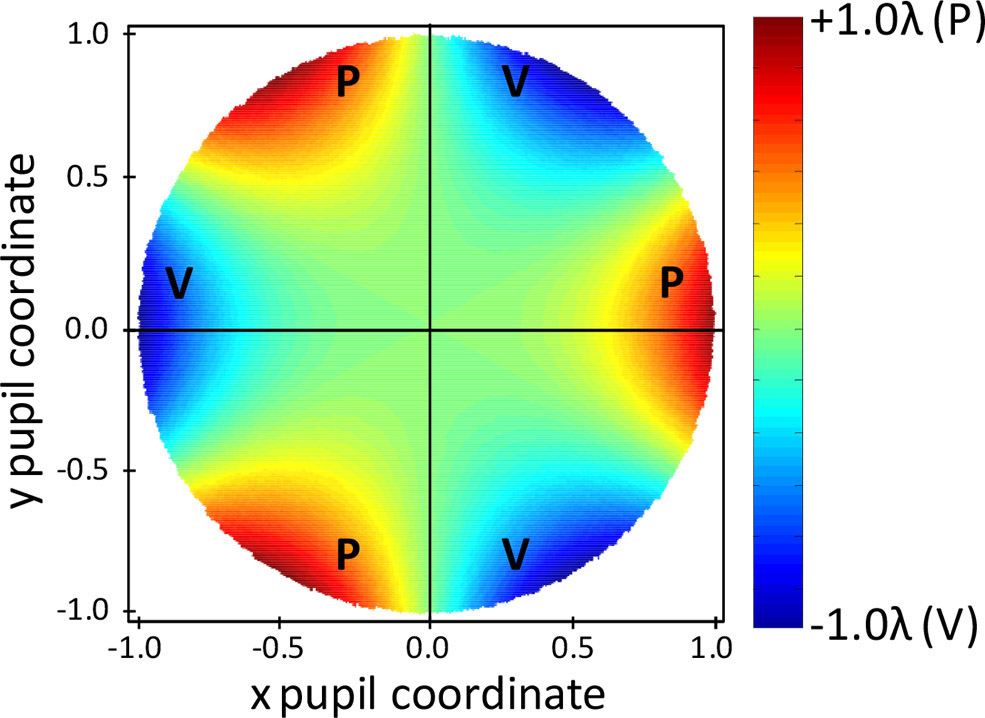 Figure 1. A representative freeform optical surface. This particular shape is classified as a Zernike trefoil overlay, often encountered in the mounting of mirrors in large telescopes. P and V denote where the surface error is a peak or a valley, respectively. λ: Wavelength.

The behavior of an aberration field in a ϕ-polynomial surface is tied to its axial position relative to the aperture stop (or pupil) of the optical system. At the stop surface, the beam footprint is the same for all field points, so all field angles receive the same contribution from the freeform surface. In this case, the net aberration is field constant.4 Our work considers the most general case, where the freeform component may be anywhere in the optical system. For such a surface away from the stop, the beam for an off-axis field angle begins to displace along the optical surface, creating a net aberration that is field dependent. 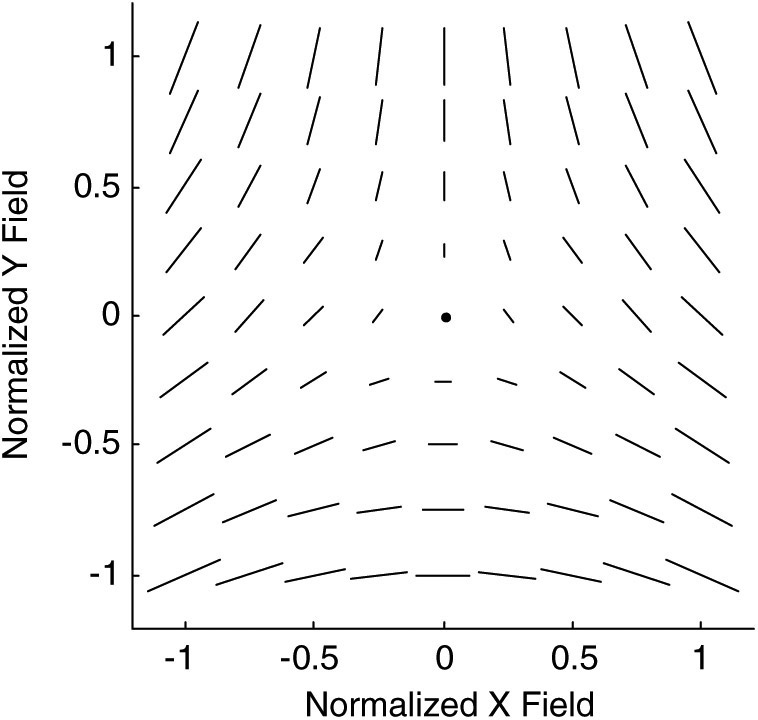 Figure 2. The characteristic field dependence of field conjugate, field linear astigmatism that is generated by a specific freeform surface shape, a Zernike trefoil overlay, on an optical surface placed away from the aperture stop of an optical system.

Significantly, this specific surface generates a new form of astigmatic field dependence that increases linearly with the conjugate field vector, and is known as field conjugate, field linear astigmatism.5 The aberration takes on a unique magnitude and orientation that can be seen in the astigmatic line images throughout the field of view (see Figure 2). The aberration has not previously been isolated, and represents the first time an aberration with conjugate field dependence has been linked to an observable quantity. The result offers a key to link the aberration theory of any effective freeform surface to the known developments of NAT in the context of optical system design. 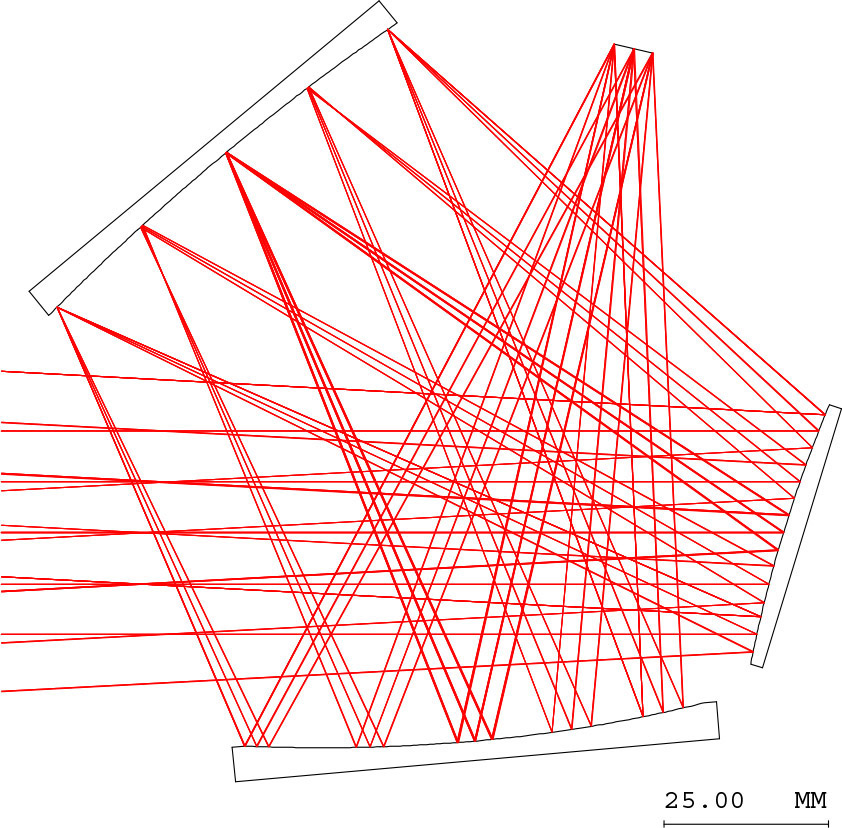 Figure 3. Layout of imaging system optimized with three tilted, ϕ-polynomial surfaces. The system operates at F/1.9 over a 10°diagonal full field of view (FOV) and obtains an RMS wavefront error of <λ/100(0.01λ) at 10μm over the entire FOV.

Work is now nearing completion at the University of Rochester on a system with freeform optical surfaces in a fully nonsymmetric configuration (see Figure 3).6 The optical system is based on three tilted ϕ-polynomial mirror surfaces where the freeform terms are used efficiently for both field-constant and field-dependent aberration correction. Each mirror has been diamond-turned by II-VI Inc. in a copper substrate with a gold protective coating. The surface metrology of each mirror is performed interferometrically using a series of adaptable subsystems that null a particular aberration type present in the departure of the mirror surface. The design, fabrication, and testing of the system has presented a pathway to a new family of optical systems with freeform surfaces.7

Kyle Fuerschbach is a PhD candidate investigating the aberration fields of ϕ-polynomial optical surfaces for design, fabrication, and assembly under the advisement of Jannick Rolland. He received his BS in optical sciences and engineering from the University of Arizona in 2008.

Jannick Rolland is the Brian J. Thompson Professor of optical engineering and director of the R. E. Hopkins Center for Optical Design and Engineering. She holds appointments in the Department of Biomedical Engineering and in the Center for Visual Science. She is a Fellow of SPIE.

Kevin Thompson is the group director for research and development/optics at Synopsys. He is a Fellow of SPIE.