The ability to understand and diagnose a range of medical conditions—from cancer to cardiovascular disease—is frequently dependent on how well doctors can non-invasively peer inside the body. Magnetic resonance excels at imaging soft tissue without exposure to radiation, but the images typically have low resolution and the equipment is expensive. X-ray devices provide much higher resolution, but they expose patients and doctors to hazardous radiation. Photoacoustic imaging or tomography (PAT) is an emerging technique that combines the high resolution of optical light with the deep imaging capability of ultrasound.1, 2 In conventional PAT, pulsed lasers are fired at biological tissue. The tissue rapidly heats and expands, generating acoustic waves. Ultrasonic detectors then turn the sound waves into images. Unfortunately, PAT requires the tissue and detector to be in contact with gel or water.

The need for fluid contact makes PAT unsuitable for a number of applications: brain surgery, burn diagnostics, and in combination with x-ray mammography. Opthalmology, in particular retinal imaging—which benefits from PAT—is presently limited by the need for external contact between the ultrasonic detector and the eyelid.3 To address these limitations, we have developed a method for using PAT that eliminates the need for direct contact with the tissue. Our non-contact PAT (NCPAT) relies on laser ultrasonics—a method for detecting acoustic waves using lasers—and is derived from our work on detection lasers and interferometers.4 Laser ultrasonics is used in industrial applications such as the ultrasonic characterization of hot metal parts or parts with curved surfaces. The solution provided by laser ultrasonics, in which a detection laser beam is used in combination with an interferometer, is similar in nature to the one needed for NCPAT. However, there is a major hurdle for transferring the technology to biomedical applications: laser exposure safety limits must be maintained while keeping adequate sensitivity. Laser energy densities must therefore be generated and detected below a threshold for safe and non-invasive diagnostics. 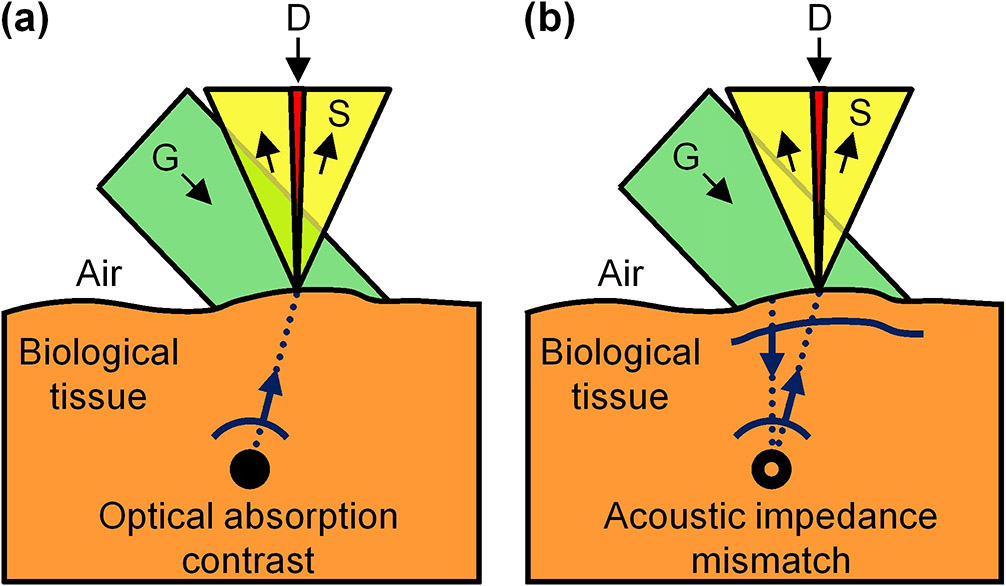 Figure 1. Comparison of propagation delays between (a) non-contact photoacoustic imaging or tomography (NCPAT) and (b) non-contact ultrasound (NCUS). In the case of NCPAT, thermal expansion occurs at an inclusion (e.g., a blood vessel) embedded in the tissue, propagating ultrasonic waves to the surface. With NCUS, the surface generates a probing ultrasonic wave that reflects off the same inclusions to be detected at the surface. G: Generation laser beam. D: Detection laser beam. S: Signal beam.

As in the most common form of PAT, our approach uses nanosecond laser pulses to illuminate the biological tissue over the entire region of interest. Ultrasonic waves are generated by optical absorption of endogenous structures, with or without contrast agents. Our strategy for minimizing exposure of the tissues to the detection laser is based on the use of high peak power laser pulses limited in duration to the minimum temporal window necessary for ultrasound propagation at the desired probing depth. We slice a pulse of adequate duration and shape from a continuous master oscillator and then amplify it to high peak power using a pulsed power amplifier. We obtain optimum sensitivity, corresponding to the shot noise detection limit, by reducing the intensity and phase noise of the detection laser with a previously developed noise-cancellation scheme, while taking advantage of the fast response time and large photon collection capability of a confocal Fabry-Pérot interferometer.5

To obtain an image, we scan the detection laser spot step by step to get an array of detection points and apply a synthetic aperture focusing technique algorithm for reconstruction. This algorithm sums all the signals from the various detection points after taking into account the propagation delay between the ultrasound point source and the detection point on the surface: see Figure 1(a) for the NCPAT reconstruction. Since biological tissues are highly scattering, there is a concentration of generated light intensity near the surface of the tissue. An acoustic source thus follows the surface topology, and according to the two-way path reconstruction sketched in Figure 1(b), we obtain a non-contact ultrasound (NCUS) image of the medium with exactly the same data.

By applying these strategies, we carried out ex vivo measurements in chicken breast tissue and calf brain specimens without exceeding laser safety limits.6–8 In both cases, we introduced blood vessel phantoms and metallic wires in known locations prior to measurement. We adjusted the absorption of the blood vessel phantoms to mimic that of blood at the generation laser wavelength of 532nm. Typical NCPAT and NCUS images are shown in Figures 2 and 3 for chicken breast and calf brain specimens, respectively. As seen in Figures 2(a) and 3(a), contrast in NCPAT images is given by optical absorption, whereas in Figures 2(b) and 3(b), NCUS images show variations of acoustic impedance. This is well-verified by the various inclusions used in the chicken breast and calf brain specimens. As expected, the blood vessel phantoms, which are optically absorbing and nearly acoustically matched with the medium, are easily seen in the NCPAT images, but are not visible in the NCUS images. The metallic wires, which display a strong acoustic impedance mismatch with the surrounding tissue, are easily seen in the NCUS images, but their visibility in the NCPAT images is color dependent. This is why the white painted wires, which do not absorb light, are not visible in the NCPAT images, whereas the gray one is easily seen in Figure 2(a).

We have demonstrated that non-contact PAT, using laser ultrasonics, can detect inclusions in chicken breasts and calf brains without exceeding laser safety limits. We expect to team with external collaborators to continue development toward potential applications such as brain surgery, burn diagnostics, and ophthalmology. We have performed a preliminary evaluation showing that sensitive and safe detection off the retina appears feasible with microjoule energy despite the lower permissible laser exposure for the eye compared to skin. NCPAT is expected to show signatures of blood vessels directly by their thermal expansion or generated ultrasonic waves, as well as any other absorbing features. Combining NCPAT with optical coherence tomography could lead to a convenient and powerful diagnostic tool for many eye diseases.