The use of light bulbs for life science and digital display applications has many drawbacks, including limited bulb lifetime, regular and expensive system maintenance, low lumen (visible light) output, and the inability to fluoresce or to color balance (to achieve white light). LEDs, by contrast, do not present these issues, and offer a good alternative to bulbs. However, to date, LED technology has not been used because of its Lambertian intensity (the tendency to create intense radiance from all angles) and because of difficulties in coupling and joining multiple units. Furthermore, LEDs create high thermal loads.

Attempts to overcome the problem of combining multiple LEDs while minimizing etendue (the ‘spread’ of the light) have failed to provide an effective solution. In one example, LEDs operate in conjunction with an X cube (an arrangement of dichroic filters used to focus injected light) or a plate, but this method requires large, expensive lenses and complicated alignment. Another approach uses staggered dichroic optics, but also requires high-cost lenses, equal optical paths, and a large footprint, and can result in significant loss of light. A further method combines a blue LED with phosphor, but its effectiveness is reduced by reabsorption, slow phosphor development, and undirected light emission.

We have addressed the problems of combining LEDs with a new system: the LED Multiplexer, which comprises light pipes and specialist coatings to combine radiance.1 The system uses individual collimators (devices that narrow a beam) or light pipes for each wavelength of LED, and employs proprietary processes for advanced energetic deposition of dielectric thin-film optical coatings. These coatings are either highly reflective or anti-reflective, to ensure that light is transmitted through the system without allowing it to reflect back. The pipe acts to combine the different wavelengths so that white light is emitted.

Our approach results in very little loss of light from coatings, clipping, and polarization. The LED Multiplexer is designed to collimate, color mix, and homogenize high-brightness LEDs in systems that restrict etendue. Therefore, it is possible to create a color-changeable light source with a small emission area and a uniform spread, and we can tailor the technology for specific applications to ensure optimal performance. The design requires less space than traditional freespace multiplexer optical architectures (which combine light in air using lenses and/or filters, requiring air ‘gaps’) and achieves comparable efficiency. The flexible design parameters can accommodate multiple LEDs, which offer a far longer lifetime than bulb sources, dramatically reducing the operating costs. 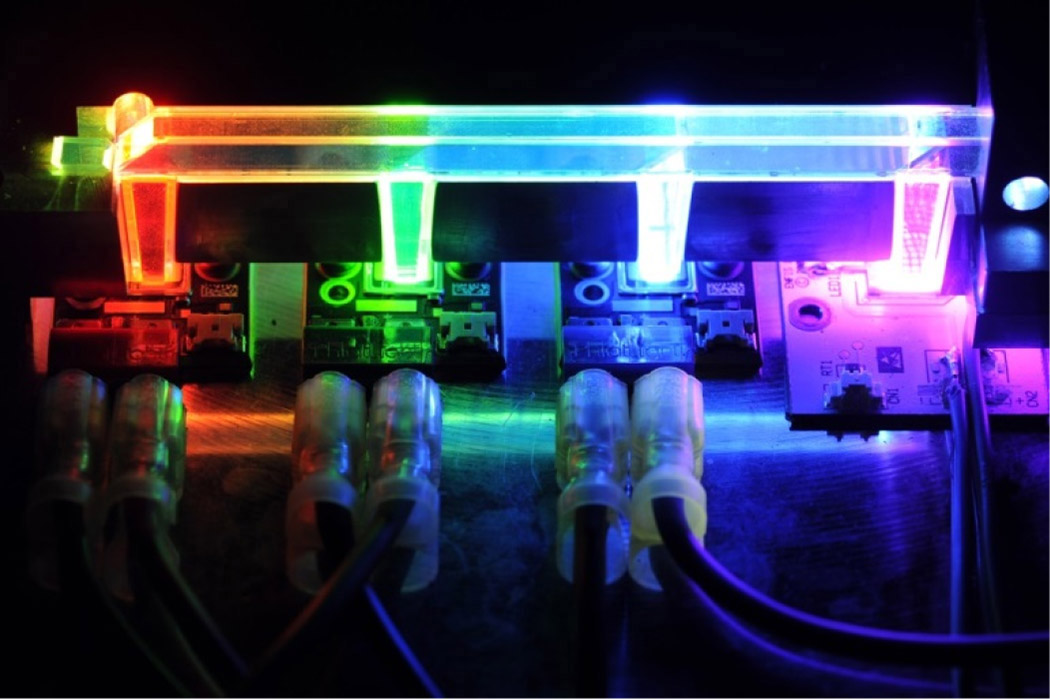 The first application we considered for the technology was endoscopy, for which we created a prototype hollow pipe. This comprised a red, green, blue, and UV LED (see Figure 1). Our design combines light from divergent sources to provide illumination matched to the numerical aperture of the endoscopic light guide.2 We enclosed the optics, as well as the circuitry for thermal management and electronic drive, in a case to enable testing of the device at Imperial College London (ICL), using a laparoscope and ex vivo and in vivo procedures. The aim was to create a light source capable of producing white light as well as fluorescing cancerous tissues. Currently, surgeons require two separate systems to achieve these aims: one for white light and one for fluorescence. ICL found that the system generated white light imaging quality similar to that of xenon sources, generated blue light for fluorescence purposes, and was capable of narrow band imaging. The images produced were redder overall than those from the xenon source, but visualization was equally good. Testers also found they could improve contrast using green or blue wavelengths only,2 highlighting the benefits of the system's color tuning functionalities. Further results from these tests will be published in academic papers in the near future.

The second application we considered was digital display. We aimed to use a light pipe, consisting of red, green, and blue LEDs, to create a projection system capable of producing HD quality images with a high lumen output. Customers evaluating the prototype system found it gave excellent image quality and a very wide color gamut, so that colors such as red were very vivid. However, further work is required to identify a design suitable for manufacture that would provide better coupling efficiencies. This is because the hollow pipe design suffered loss of light due to the sheer number of individual glass pieces that make up the system. As such, during second stage developments for both the endoscopy and digital display designs, we created a solid light pipe design (see Figure 2). This structure3 uses fewer pieces of glass, reducing the amount of light lost. It also uses a prism and lens setup, as opposed to a collimating leg system, and overcomes the issue of polarization. 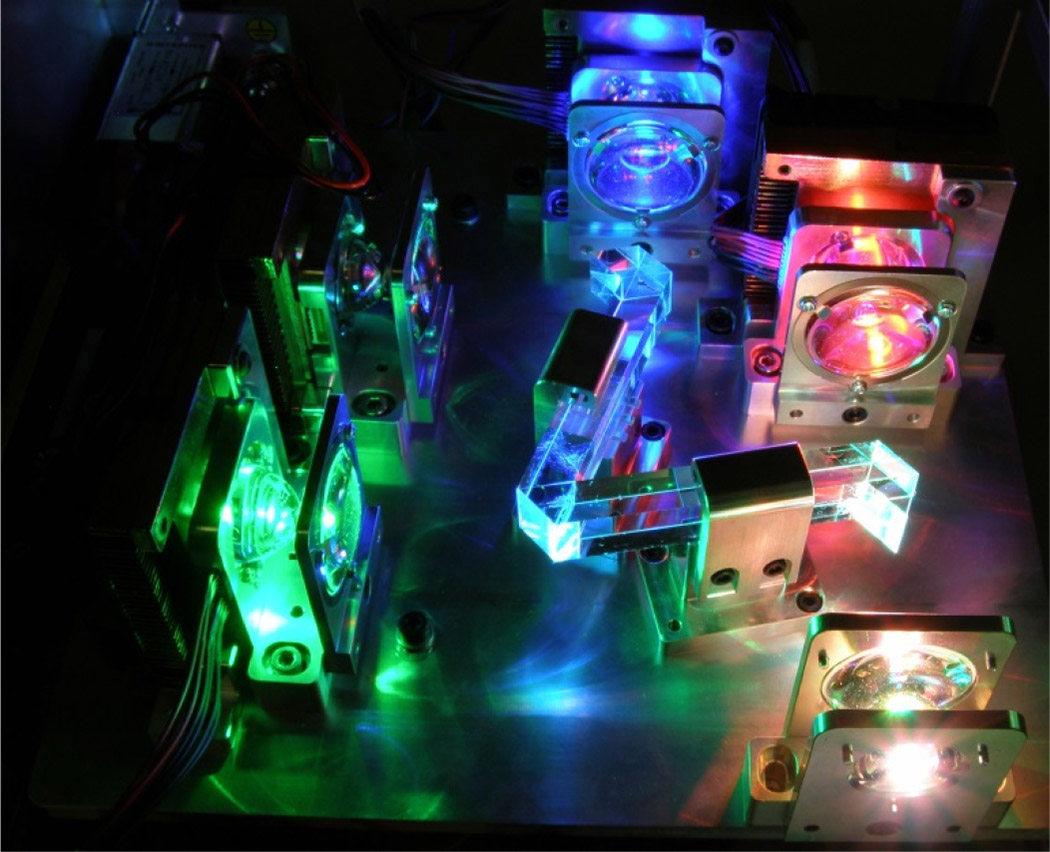 We are currently designing new exit optics for the endoscopy device. Computer-generated models indicate that we will be able to achieve far higher coupling efficiency than in existing systems. For the digital display application, we have designed a second-generation prototype. We are now in the final phases of constructing this model, and initial testing indicates that we can achieve 90% efficiency through some channels. Overall, the optical systems for both markets provide 20% more coupling efficiency into a light guide and onto a digital micromirror device than the best reported results on the market.

LED technology has so far fallen short of providing an efficient solution to etendue-restrictive applications. Our technology addresses this problem and offers a commercial replacement for high-power xenon lighting systems. The next step for the endoscopy multiplexer prototype is to conduct clinical trials using the solid light pipe system shown in Figure 2. ICL will carry out these tests, with the results expected in 2014. To realize the digital projection prototype, we will provide the solid light pipe to our customer for testing and evaluation. Subsequently, we will focus on optimizing the pipe design and increasing the lumen output of both systems.

Samantha Yandle is business development manager and is currently nearing the end of a PhD in business growth in knowledge-based firms.

Ron Yandle is CEO. He trained in operations management and for the last 20 years has been a senior director at optoelectronics companies, including Corus, Control Data Corporation, and Panasonic.

Daniel Rees-Whippey is the lead electronic design engineer. Previously, he worked for large manufacturing companies, start-up firms, and Ministry of Defence contracts. Daniel is currently studying towards a PhD in physics via the Knowledge Economy Skills Scholarship.

Nigel Copner is CTO. He obtained the top first class physics honors at Reading University in 1988, and later obtained a PhD in laser physics from Swansea University. Nigel invented the wedged switch, dispersion interleaver, and blue note laser, and has accumulated more than 40 patents.