Monitoring the viability of coral reefs

Reef-building corals are important marine organisms. They form tropical coastal topography, have a symbiotic relationship with zooxanthellae, and are the primary producers in tropical oligotrophic (having few nutrients) seas. Coral reefs are typically monitored using the ‘coral cover’ indicator. This is defined as the ratio of the area covered by coral to that of the seafloor. Higher coral cover indicates a better conservation status. To measure coral cover accurately, however, the viability of coral tissue must also be measured.

The impact of global climate change has recently become apparent as the warming of oceans. Corals are fragile ecosystems with high sensitivity to water temperature. Coral communities are frequently killed due to high water temperatures, typhoons, and attacks by Acanthaster planci (crown-of-thorns starfish). It is therefore becoming increasingly important to monitor regional coral distributions.

We use the fluorescent characteristics of corals to monitor their viability. Peaks in the UV-excited fluorescence spectrum of a coral colony are typical of green fluorescent proteins (see Figure 1).1 UV-excited fluorescence diving investigations, conducted at night, provide more accurate coral viability checks than ordinary coral monitoring, but the size of the areas that can be studied is limited. We have developed a coral observation system that uses fluorescence imaging lidar (light detection and ranging) on a glass-bottom boat.2 Our system enables us to obtain images sequentially along a single boat track. 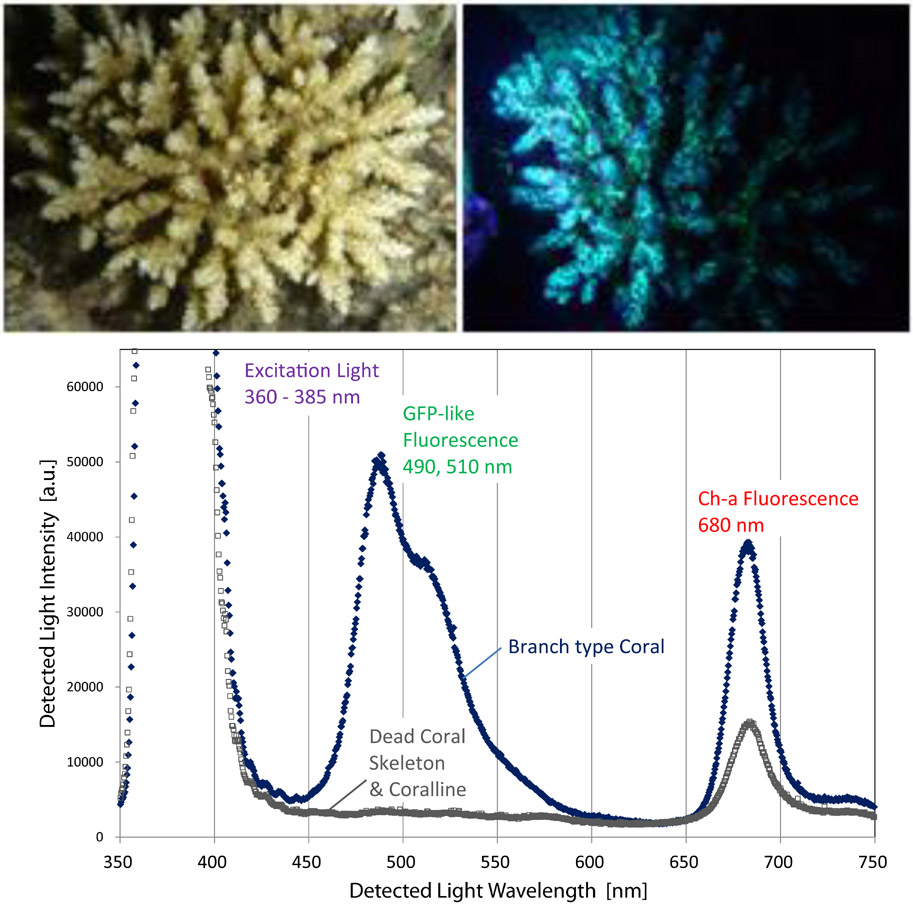 The boat platform for our system allows a long and stable survey line to be maintained, which suppresses most wave and tide disturbances. Coral fluorescence lidar is an active observation technique that uses a pulsed laser, and is not significantly affected by solar altitude or cloud cover. As a result, observations made with our system have a good range, i.e., more than 10m of water depth when water transparency is good. Continuous coral viability checks can be achieved when measurements are made with low boat cruising speeds.

Our coral fluorescence lidar system consists of a 355nm wavelength UV pulsed laser, an optical filter, and a gated intensified CCD (ICCD) camera. The timing of the laser shot and the opening of the ICCD gate are controlled and set appropriately for a specific water depth. Because the exposure time of the ICCD camera is very short, the effects of sunlight and motion blur are negligible for observed seafloor fluorescent images.

We conducted coral fluorescence lidar observations near Taketomi Island in Okinawa, Japan, during June 2011.3 The average boat speed during the observations was about 4 knots, and the measurement campaign lasted 125 minutes. We have categorized the fluorescent lidar images according to the substratum that we observed (see Figure 2) so that we can map the distribution of live branch and table type corals, dead coral skeletons, sand, sea grass, and algae (see Figure 3). We excluded from the map data that was blurred because of multiple scattering or inadequate image intensity, which occurs when the water in the observation area is deep or has low transparency. 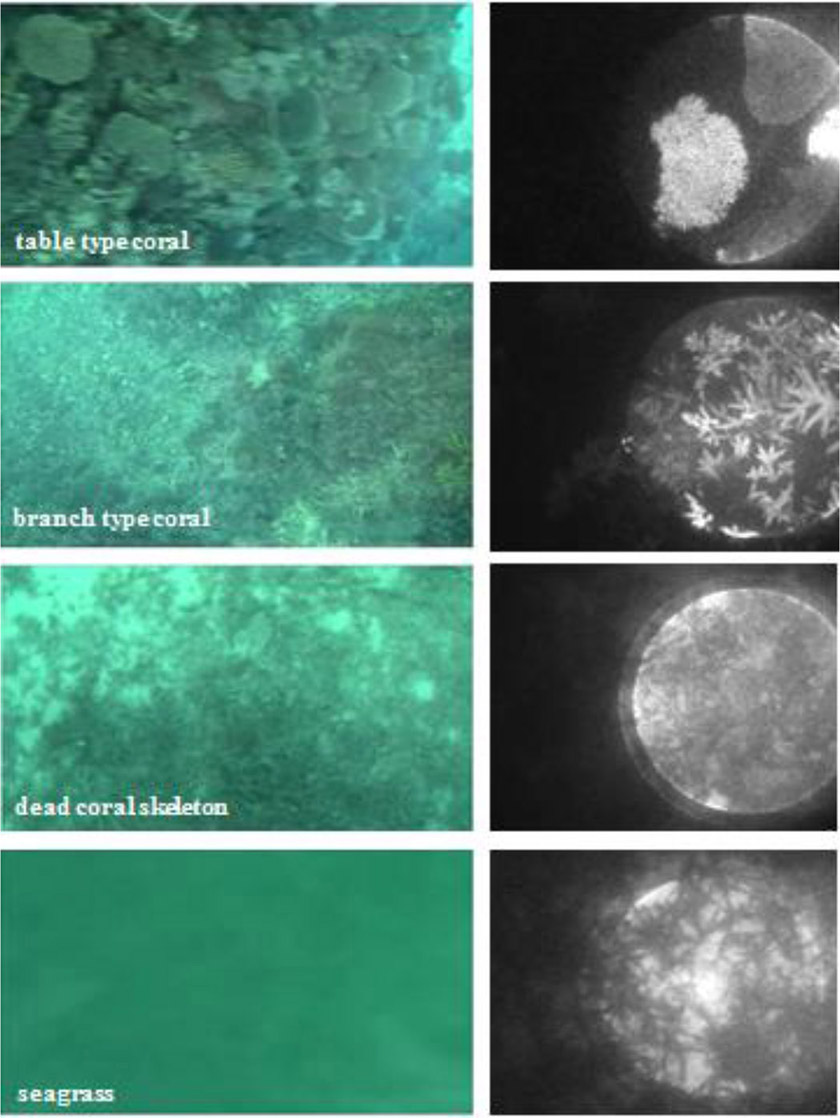 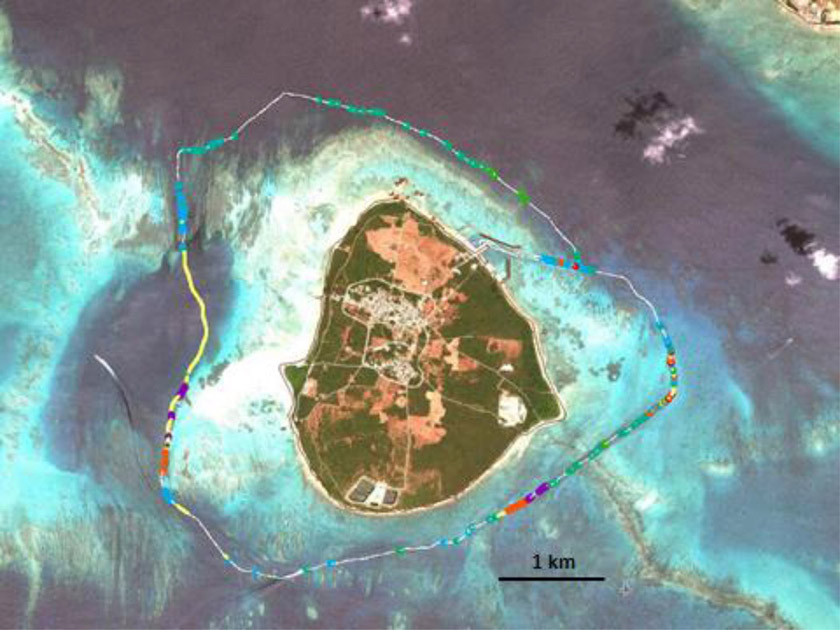 In summary, UV-excited fluorescence of corals can be measured using a lidar system installed on a glass-bottom boat, allowing the viability of these ecosystems to be monitored over large areas of the seafloor. We are currently working to develop a new container for our lidar system so that it can be installed on an ordinary, rather than glass-bottom, boat.

This study was funded by the National Institute of Japan's Center for Global Environmental Research. The authors thank all the participants of this study, as well as the Ministry of Land, Infrastructure, Transport, and Tourism of Japan, and the Ministry of the Environment of Japan for permitting the publication of this work.