Microscopy has contributed greatly to scientific knowledge of structures and functions in many fields and is an indispensable tool for nanoscience and nanotechnology. Over the past few decades, considerable research has investigated very high resolution x-ray imaging. However, the spatial resolution of x-ray microscopy with a lens is limited by the manufacturing quality of the x-ray optics. More recently, lensless x-ray imaging has emerged as a powerful approach that can circumvent this limitation. A lensless technique called coherent x-ray diffraction imaging (CXDI) was proposed by David Sayre1 in 1980 and demonstrated by Jianwei Miao, Sayre, and coworkers2 in 1999. In this approach, coherent x-rays illuminate a specimen and the weakly scattered x-ray photons form a continuous diffraction pattern in the far field. Phase retrieval calculations permit reconstruction of a 2D or 3D image.3CXDI with hard x-rays enables observations of thick objects in 2D and 3D with high spatial resolution and provides unique structural information such as electron density and elemental distribution.

The original geometry of CXDI, in which the sample is illuminated with an x-ray plane wave, is limited to an isolated object. This significant limitation was overcome in 2007 with the demonstration of ptychographic CXDI,4 in which a highly focused x-ray beam is scanned across the sample and the diffraction pattern is observed for each beam position. We have used both plane-wave and ptychographic CXDI at SPring-8, the large synchrotron radiation facility in Hyogo Prefecture, Japan, to measure high-contrast coherent x-ray diffraction patterns of shape-controlled nanoparticles. We successfully reconstructed 2D projections and 3D images of the nanoparticles at sub-10nm resolution, demonstrating the technique's usefulness for characterization of nanoparticles. 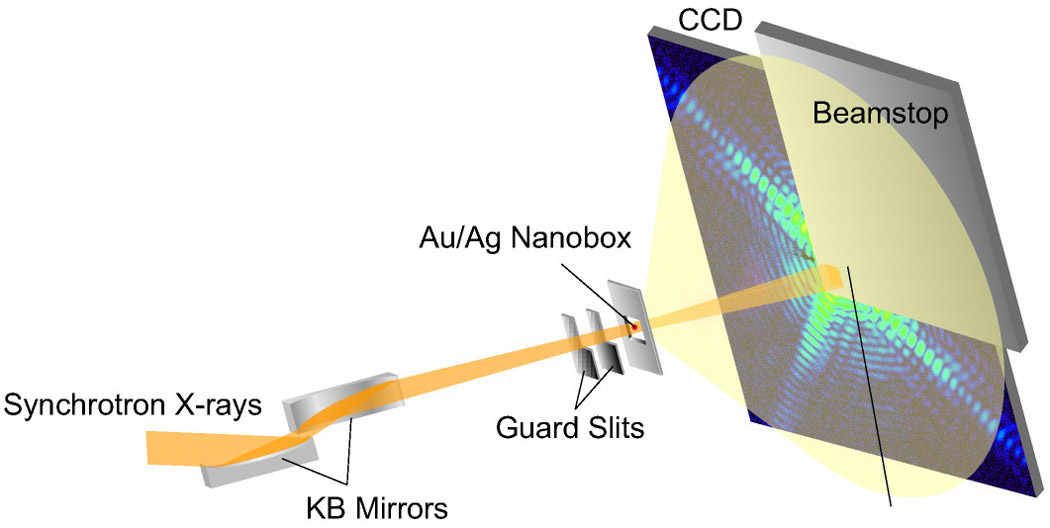 In principle, the spatial resolution of CXDI is limited only by the wavelength of the incident beam, which exceeds the technological limitation of x-ray microscopy with lenses such as Fresnel zone plates. In practice, however, the spatial resolution achieved in CXDI experiments is effectively limited by the strong decay of the diffraction intensity with increasing scattering vector. Improving the resolution thus requires a high flux density of coherent x-rays. We have therefore developed a high-resolution coherent x-ray diffraction apparatus5 installed with total-reflection-mirror optics at SPring-8 (see Figure 1). The monochromatic x-ray beam is two-dimensionally focused by Kirkpatrick-Baez mirrors to a spot of ∼1μm size with an intensity of ∼2×1011 photons/s. Samples are mounted on the focal plane and forward-diffracted x-ray photons are detected by a CCD detector.

We have used this high-resolution CXDI apparatus to map the electron density and elemental distribution of gold/silver (Au/Ag) nanoboxes.6Nanoboxes are nanostructures with hollow interiors, and are useful in applications such as encapsulation and site-specific delivery of chemicals. Nanoboxes made of noble metals are particularly attractive owing to their strong scattering and absorption peaks in the near-IR region. Au/Ag nanoboxes are typically made by reacting solid Ag nanocubes in an aqueous solution of chloroauric acid (HAuCl4), which removes three Ag atoms for each Au atom deposited. 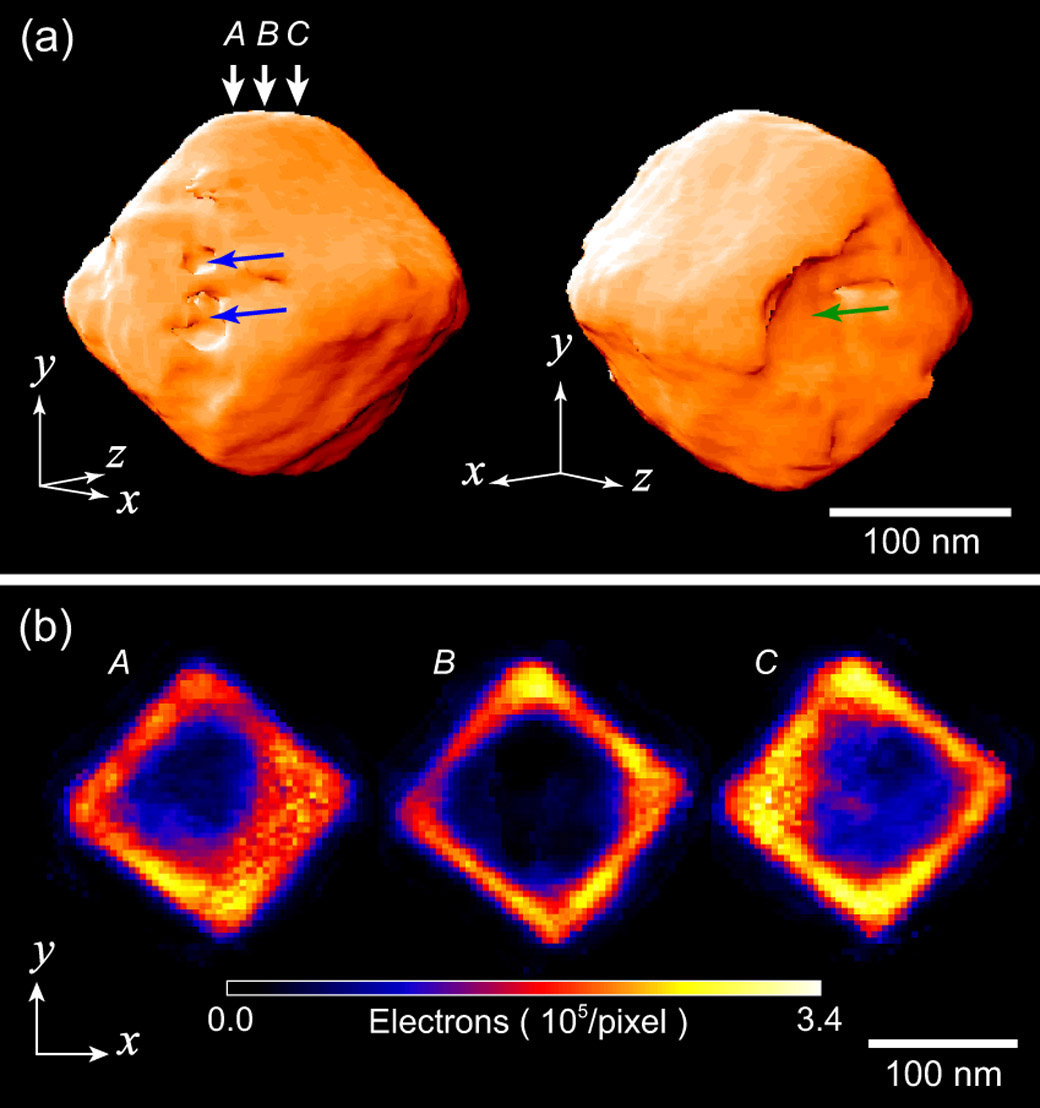 Figure 2. (a) Isosurface rendering of a 3D reconstruction of a single Au/Ag nanobox viewed from two directions, showing small pits (blue arrows) and a depression (green arrow). A, B, and C indicate the planes (each parallel to the xy plane) used for cross-sectional images. (b) Cross-sectional electron-density maps show how the interior space and walls vary across the nanobox. 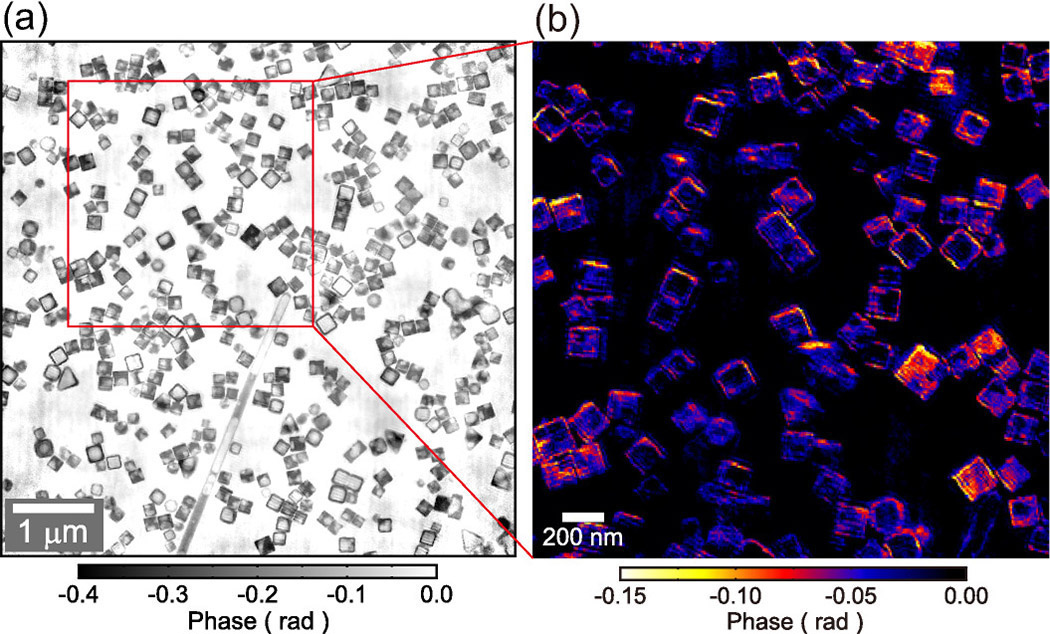 Figure 3. (a) Phase map of Au/Ag nanoboxes reconstructed from ptychographic diffraction patterns at 11.700keV. (b) Difference image of phase maps at 11.700 and 11.910keV in the red square shown in (a) reveals the Au-rich regions of the particles.

Figure 2(a) shows a 3D reconstruction of a single Au/Ag nanobox obtained by high-resolution CXDI in the plane-wave geometry.7The distinctive surface features of the nanobox are some small pits and a depression on two of the faces. The other faces are relatively flat. The pits might be related to the initial stage of the Au/Ag replacement reaction that formed the nanobox.6To quantitatively visualize the nanobox's 3D internal structure, we produced cross-sectional images in three parallel planes: see Figure 2(b). The hollow interior is clearly visible in each image. In the plane crossing the center of the nanobox (plane B), the interior space is larger and the wall is thinner than in the other two planes. This result indicates that the replacement reaction between Ag and HAuCl4 progresses at different rates depending on the location in the nanostructure. Judging from the thinnest wall in the plane-B image, we estimate the spatial resolution of this 3D reconstruction to be better than 10nm, which is the highest resolution achieved with 3D CXDI.

High-resolution plane-wave CXDI permits thorough observation of a single particle. Conversely, high-resolution ptychographic CXDI can produce 2D images of many nanoparticles in a large field of view,8 as demonstrated with the phase map of Au/Ag nanoboxes9 shown in Figure 3(a). Approximately 450 nanoparticles and a single nanorod are visible in a field of view larger than 5μm × 5μm. Partially hollow interiors in the individual particles and partial nanotubes in the nanorod are clearly visible in the contrast of the electron-density distribution. Figure 3(b) shows the difference image of phase maps at 11.700 and 11.910keV, which is the Au elemental map of the nanoparticles since the x-ray energies are close to the Au L3-edge. The Au-rich region exists on the surface of the particles, which is consistent with the existence of the wall made of Au-Ag alloys, and implies that a pure Ag region exists inside the wall.

In summary, we have demonstrated high-resolution CXDI, using it to observe Au/Ag nanoparticles with sub-10nm resolution. The present method provides us with multiscale structural and elemental information for understanding how the properties of nanoscale structures are related to macroscopic functional properties in various materials. At present, the spatial resolution and the measurement time are limited by the flux density of the coherent x-ray beam. In the near future, we plan to conduct high-resolution elemental mapping and dynamics studies using a high-brilliance coherent x-ray source such as an x-ray free-electron laser.