X-rays generated using ultrashort intense laser pulses have very limited emission duration and high levels of brightness and coherence, making them particularly suitable for high-resolution imaging. To obtain such pulses for soft x-rays (those with lower photon energies), conventional sources include x-ray lasers or high-order harmonic (HH) generation (where a driving laser can generate new frequencies). However, with the advancement of intense pulse technologies, new possibilities are feasible, such as relativistic HH generation (which seeks to overcome HH efficiency limitations using counterpropagating pump waves) and optical-field-ionization (OFI) x-ray lasers. These mechanisms can be applied in bio-imaging for nanometer-scale resolution. Other sources, such as Compton gamma rays, may be used for nondestructive inspection of dense metals, or for photonuclear research. Recent progress in developing petawatt (PW) lasers could lead to the realization of highly bright coherent x-ray sources, to which water is transparent, and even femtosecond mega-electronvolt gamma-ray sources.

Gwangju Institute of Science and Technology in South Korea has been developing PW lasers to generate x-rays and gamma rays. Since 2006, we have applied a 100TW system to develop x-ray lasers1 and soft x-ray imaging.2, 3 Recently, we achieved two PW titanium-doped sapphire laser beamlines with outputs of 1PW and 1.5PW at a pulse duration of 30fs4,5 (see Figure 1), and performed a series of experiments using the lasers. 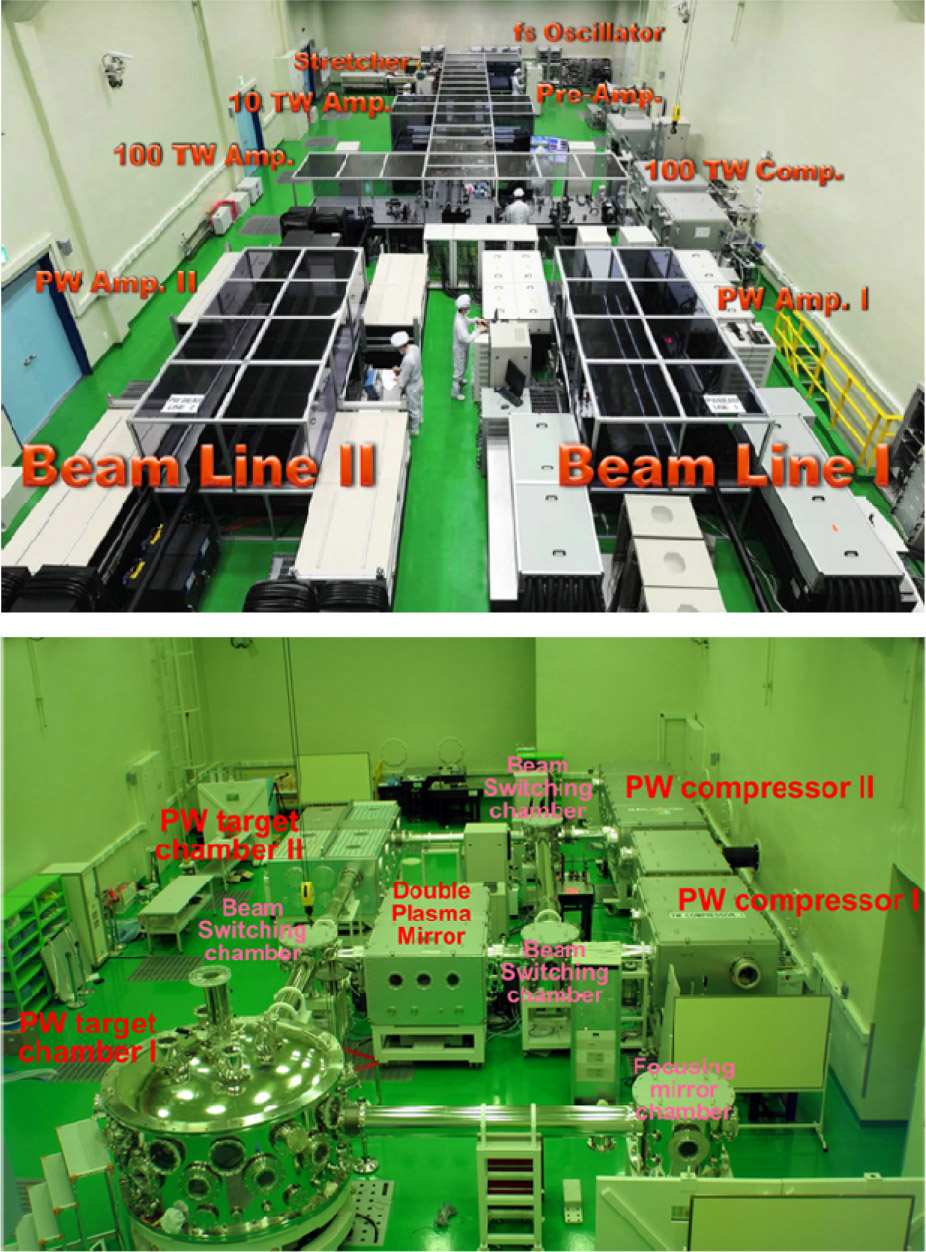 Seeking to exploit coherent, ultrashort soft x-ray sources for ultrafast nanometer-scale imaging, we successfully demonstrated a new variation of grazing incidence pumping (GRIP), in which the pump laser irradiates the target at an oblique angle. We achieved GRIP using a single profiled pumping pulse, and obtained saturated generation of a nickel-like silver x-ray laser at 13.9nm. The new laser had a stable output energy of about 1μJ/pulse and had high spatial coherence, suitable for single-shot imaging with sub-micron resolution. Therefore, we could use it to obtain Fourier transform holography with a minimum resolution of 87nm, and reconstructed an image of carbon nanotube aggregates.2 We also successfully applied the x-ray laser to coherent diffraction imaging.3

With the two PW beamlines operating, we could further explore coherent x-ray and gamma-ray generation. We conducted experiments to realize OFI recombination x-ray lasers, where population inversion occurs during the process of laser-ionized electrons recombining with the ‘parent’ ions to form neutral atoms. In collaboration with teams from the Laboratory of Applied Optics in Palaiseau, France, and the Prague Asterix Laser System in the Czech Republic, we explored possibilities for OFI recombination using a high-density gas jet pumped by PW laser pulses. However, we were unable to obtain proper amplification of the x-ray laser from neon or nitrogen, even with sufficient pumping energy, because of strong reabsorption and the short propagation distance in the dense medium. Maintaining adequate plasma temperature to achieve high gain is also critical to achieve pumping. We are now working to find solutions to these problems.

In summary, we have demonstrated high-resolution imaging with ultrashort soft x-ray pulses produced using our 100TW laser beamline and we have begun work on realizing an OFI-recombination x-ray laser using PW laser pulses. Recently, we generated a 3GeV electron beam by wakefield acceleration, driven by a single PW laser. In future, we plan to use the two PW beamlines to develop hard x-ray and gamma-ray sources. The first PW beam would generate multi-GeV electrons, while the second would focus on the electron beam to produce femtosecond gamma-ray pulses by inverse Compton scattering. Consequently, the two beamlines will provide new opportunities in the development of sources for x-rays and gamma rays, as well as highly bright x-rays in the water-window (transparent) region.