Interferometry is the approach widely favored for measuring aspheric specular surfaces, such as optics for large astronomy telescopes. This method produces highly accurate results, but has limited dynamic range. It also requires the use of null optics, including computer-generated holograms, for steep aspherical surfaces, which increases the complexity and expense of the procedure.

We have developed a software-configurable optical test system (SCOTS) that rivals interferometry in accuracy, but is flexible and far more cost-effective. The system is based on reflection deflectometry: that is, measuring the reflected light pattern from a specular surface to calculate its shape.1 SCOTS is simple in

setup, requiring only a liquid-crystal display (LCD) screen and a camera near the center of curvature of a test mirror. During a test, an intensity pattern is displayed on the LCD screen and the camera captures the reflected image on the mirror (see Figure 1). Knowing the coordinates of the pattern, mirror, and camera aperture, we can determine the mirror's surface slope by geometric ray tracing.

Because SCOTS measures local surface slope, it overcomes the dynamic range problems of interferometric tests when the surfaces are not spherical. Furthermore, our system camera provides a full field of view of the surface under test, which eliminates the need for stitching (combining overlapping images), a process that is complicated by nulling and alignment.

We recently applied SCOTS to the measurement of a large deformable aspheric mirror, one of the adaptive secondary optics of the Large Binocular Telescope.2 We designed and built an on-axis SCOTS to investigate the possible sources of astigmatism in the secondary mirror when it is elevated with a telescope. The mirror is a 91cm-diameter ellipsoidal surface with 231μm peak-to-valley aspheric departure. Figure 2 shows the on-axis SCOTS system setup built for this procedure. We aligned the camera and the LCD screen on the axis of the mirror with the help of a 2μm-thick pellicle beamsplitter. This design gave us better geometrical control in the test. We found approximately 0.2μm rms of astigmatism in a verification test with the mirror at zenith position—see Figure 3 (left)—where no astigmatism was expected. Therefore, we assumed this result to be the accuracy of the SCOTS system. In addition, the on-axis SCOTS successfully measured a series of controlled low-order aberrations when the deformable mirror directly applied 1μm rms astigmatism, 1μm rms coma, and 1μm rms trefoil at zenith position, respectively. Figure 4 shows the commanded and measured wavefront maps, and a comparison between them.

Following those validation tests, we raised the SCOTS system by an angle of 30°—see Figure 3 (right)—to test for aberrations that vary with elevation. We found astigmatism of around 6 and 3.6μm rms when the mirror went to 30° elevation from zenith and horizon, respectively. These results confirmed previous measurements by the observatory, including the hysteretic behavior of the introduced astigmatism. The findings helped the observatory to design a series of tests to investigate possible causes of the irregularity. 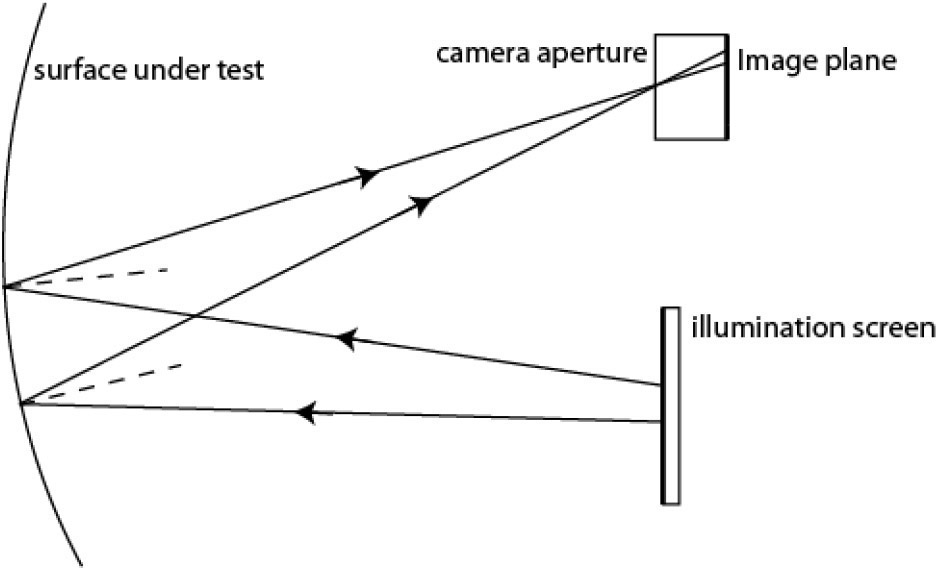 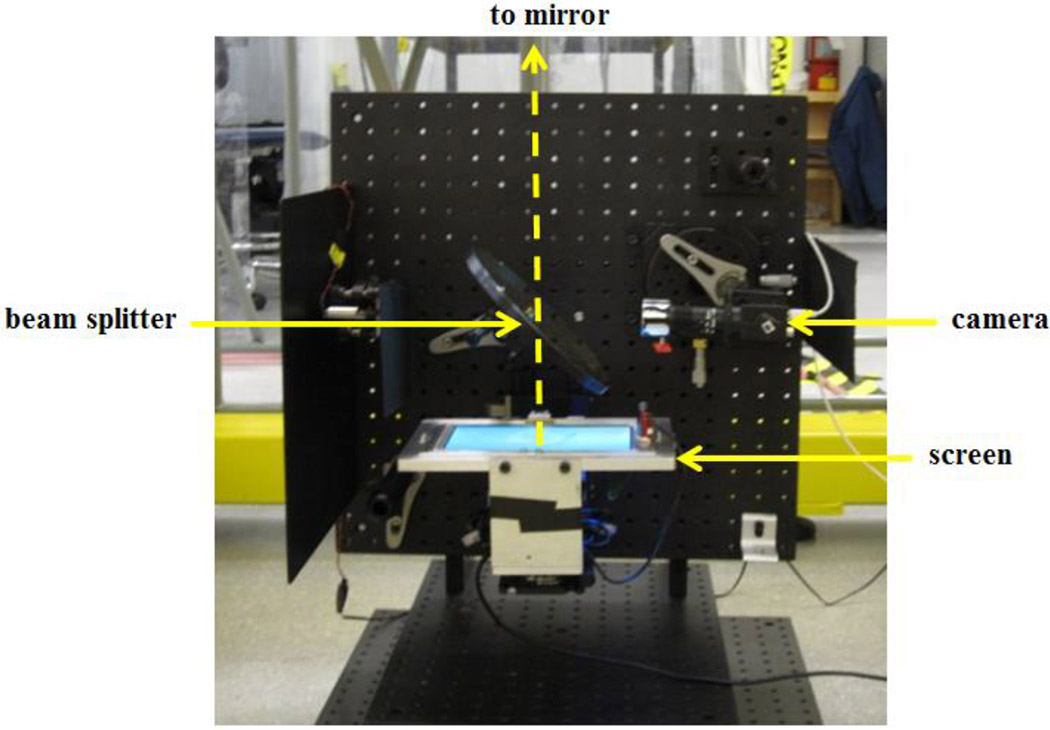 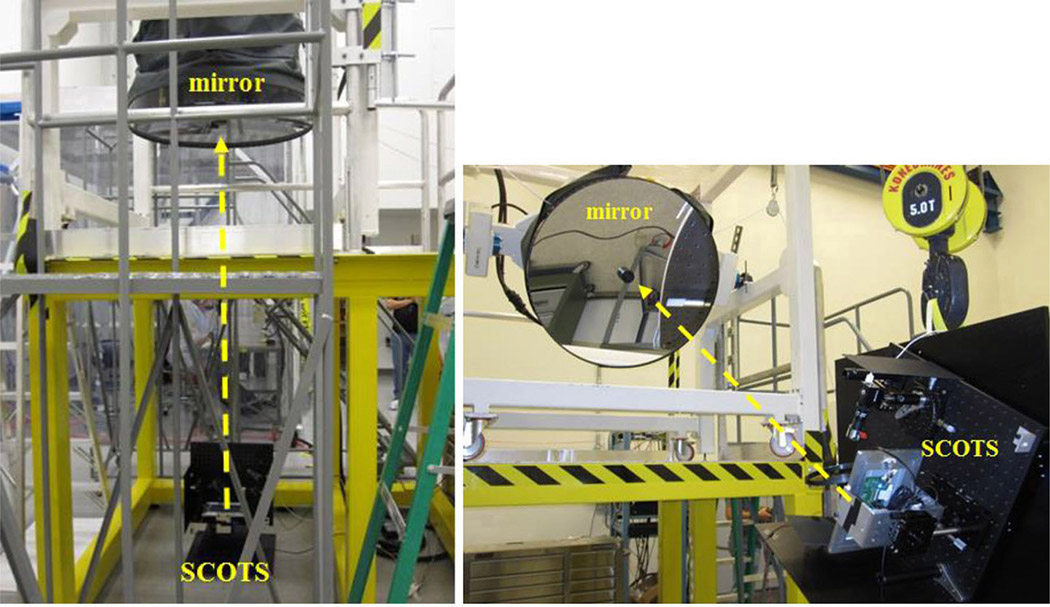 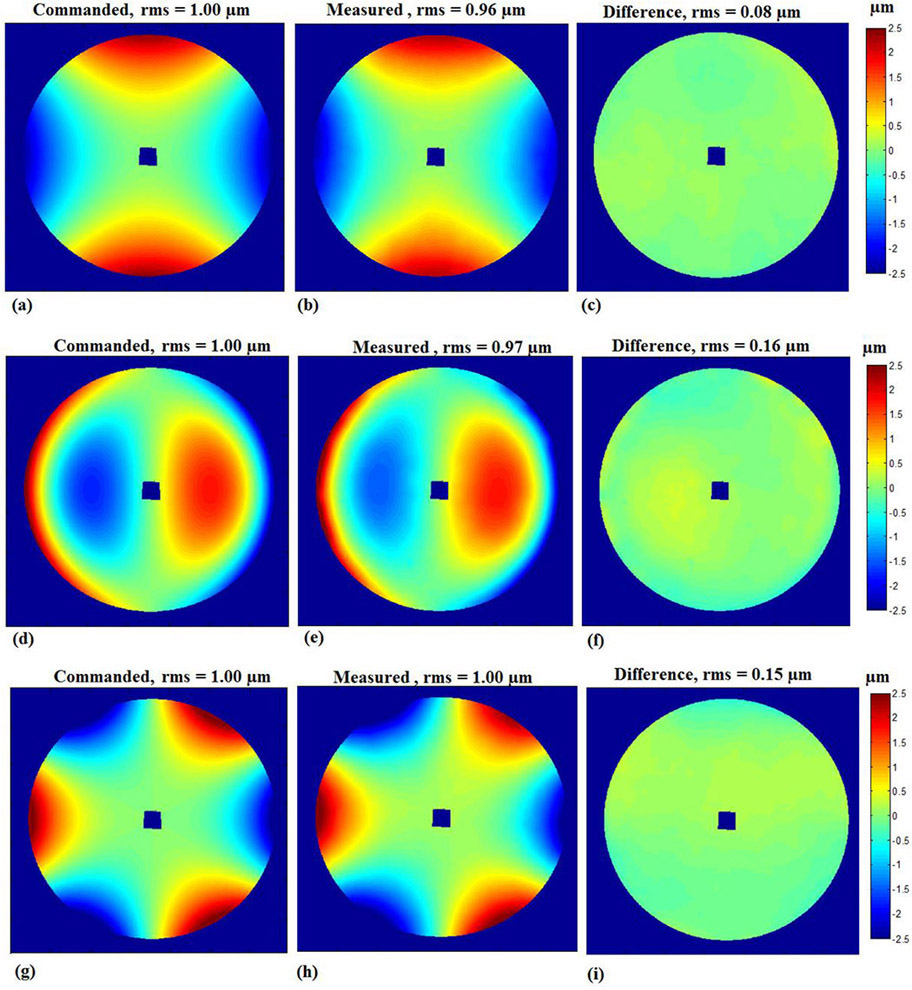 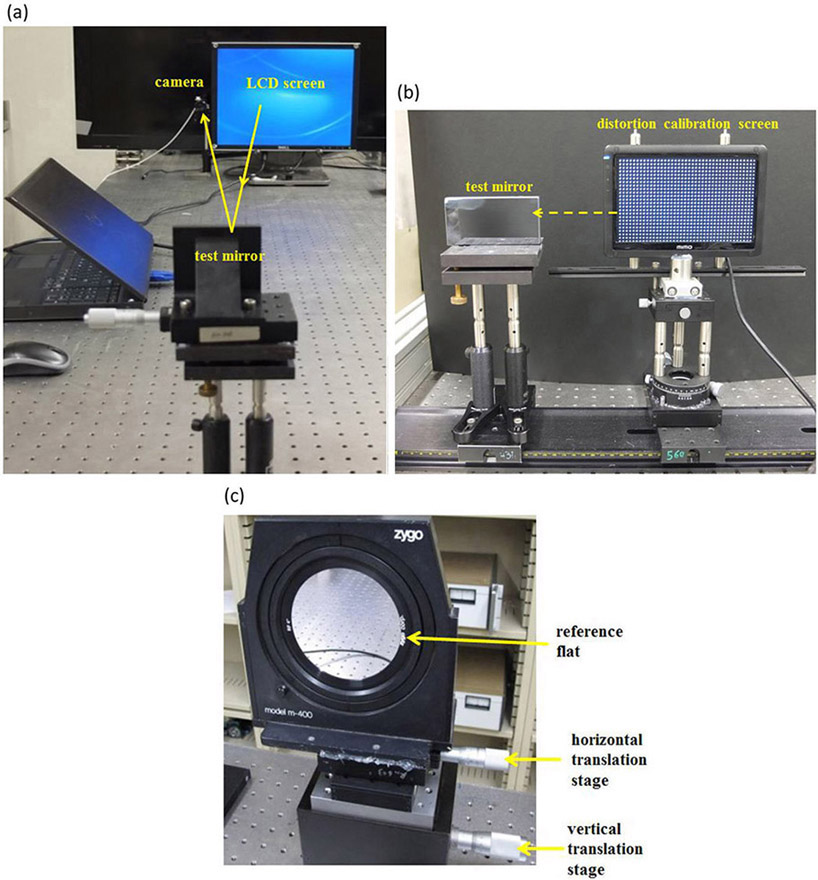 Figure 5. (a) The SCOTS test setup for an x-ray mirror. (b) Camera mapping correction using a liquid-crystal display (LCD) screen with a dot pattern. (c) The reference flat used in calibrating the system error with translation shear.

In other tests we advanced SCOTS to subnanometer (rms) accuracy for measuring a high-precision, off-axis, elliptical x-ray mirror with careful geometrical control, camera, and system calibration.3, 4 The mirror has less than 1nm rms surface error in a useful area of 90 × 8mm. In the SCOTS test, we used an alignment procedure to minimize the geometrical error, and calibrated the camera distortion and perspective in situ by aligning with the test mirror a calibration screen displaying a dot pattern: see Figure 5(b). To cancel out the systematic error we measured an interferometer reference flat aligned at the test mirror position, as shown in Figure 5(c). We also translated the reference flat in the SCOTS test to further separate the surface error from the reference flat itself, to increase accuracy. Figure 6 shows the measured surface departure of the x-ray mirror with 0.56nm rms where the Zernike power term is removed. The SCOTS also showed a slope precision of 0.1μrad rms. We are now working to improve the stability of the system to achieve higher accuracy.

In summary, SCOTS measures slopes with high dynamic range and a full field of view, and can achieve accuracy comparable with interferometry.5 In future work, we will conduct detailed investigation of imaging aberrations, camera perspective, geometrical control of the system, and the follow-up calibration procedures. SCOTS is easily adaptable to measure any free-form optic without using null correcting methods. Further development could provide a mature and relatively inexpensive test tool for optical metrology.

Run Huang received her BS (2007) and MS (2009) in optics from Nanjing University of Science and Technology. She is a PhD candidate at the College of Optical Sciences at the University of Arizona. As a graduate research associate, she is working on high-precision SCOTS system development.

Peng Su received his PhD (2008) from the College of Optical Sciences at the University of Arizona. He is currently a research associate professor there.

Robert E. Parks received a BA and MA in physics from Ohio Wesleyan University and Williams College, respectively. In 1976, he joined the Optical Sciences Center at the University of Arizona as manager of the optical shop, and was subsequently promoted to assistant research professor.

Guido Brusa received his degree in physics in 1989 at the University of Florence, Italy. From 1997 to 2002 he held positions at the Arcetri Observatory in Florence and as adaptive optics scientist at the Steward Observatory and the Large Binocular Telescope Observatory in Tucson.

Mourad Idir graduated in 1994 from Paris Sud University in France. After 10 years at Synchrotron SOLEIL in France, he joined the National Synchrotron Light Source II Project in November 2010, where he is group leader of the Optic and Tests Beamline.