Metallic structures allow for the efficient confinement of light. They can also be advantageously associated to active semiconductor materials for the development of compact and versatile devices such as spasers,1 microlasers,2 and single-photon sources.3 One of the key requirements of these hybrid devices is the reduction of inefficiencies associated with the presence of a metallic layer. These inefficiencies arise due to ohmic losses and the electronic band structure of the metals generally employed in plasmonics (above a given photon energy, interband electronic transitions occur).

The exploitation of Tamm plasmon modes presents a possible solution to this problem. These electromagnetic modes are formed at the interface between a metallic film and a distributed Bragg reflector (DBR): see Figure 1(a). Their field distribution lies between that of surface plasmons (SPs)—see Figure 1(b)—and microcavity modes: see Figure 1(c). Like SPs, they are vertically confined at the metal-DBR interface. However, they feature a higher ratio of the electric field in the dielectric than in the metallic layer. This results in lower losses than conventional SPs and an electric field shape similar to the one associated with microcavity modes. Since their theoretical prediction4, 5 and first experimental observation,6 these modes have attracted much attention for polaritonic emission7 and circuits,8 potential polariton lasers,9 and the electrical control of coupling using air-gap DBR.10

Tamm modes also open perspectives for the development of active optoelectronic devices, such as metal-organic microcavities11 and hybrid metal-semiconductor lasers.12, 13 Tamm plasmons are intrinsically confined along the z-direction, due to the negative dielectric constant from the metal of one side and the photonic band gap on the other. Moreover, they can be confined in the xy plane by patterning 2D structures (e.g., disks) in the metallic layer14 using electron-beam lithography: see Figure 2(a). The resulting Tamm modes, existing below the metal—see Figure 2(b)—experience a 3D confinement, which gives rise to discrete energy levels: see Figure 2(c). These confined Tamm plasmon (CTP) modes can be used to gain control of the spontaneous emission rate of quantum dots.3, 14 In particular, the observed fraction of spontaneous emission coupled to the mode of interest (the β factor) is close to 1 in these systems. This last point, together with the versatility offered by the easy patterning of metallic surfaces, makes CTP structures promising for the realization of low-threshold lasers. 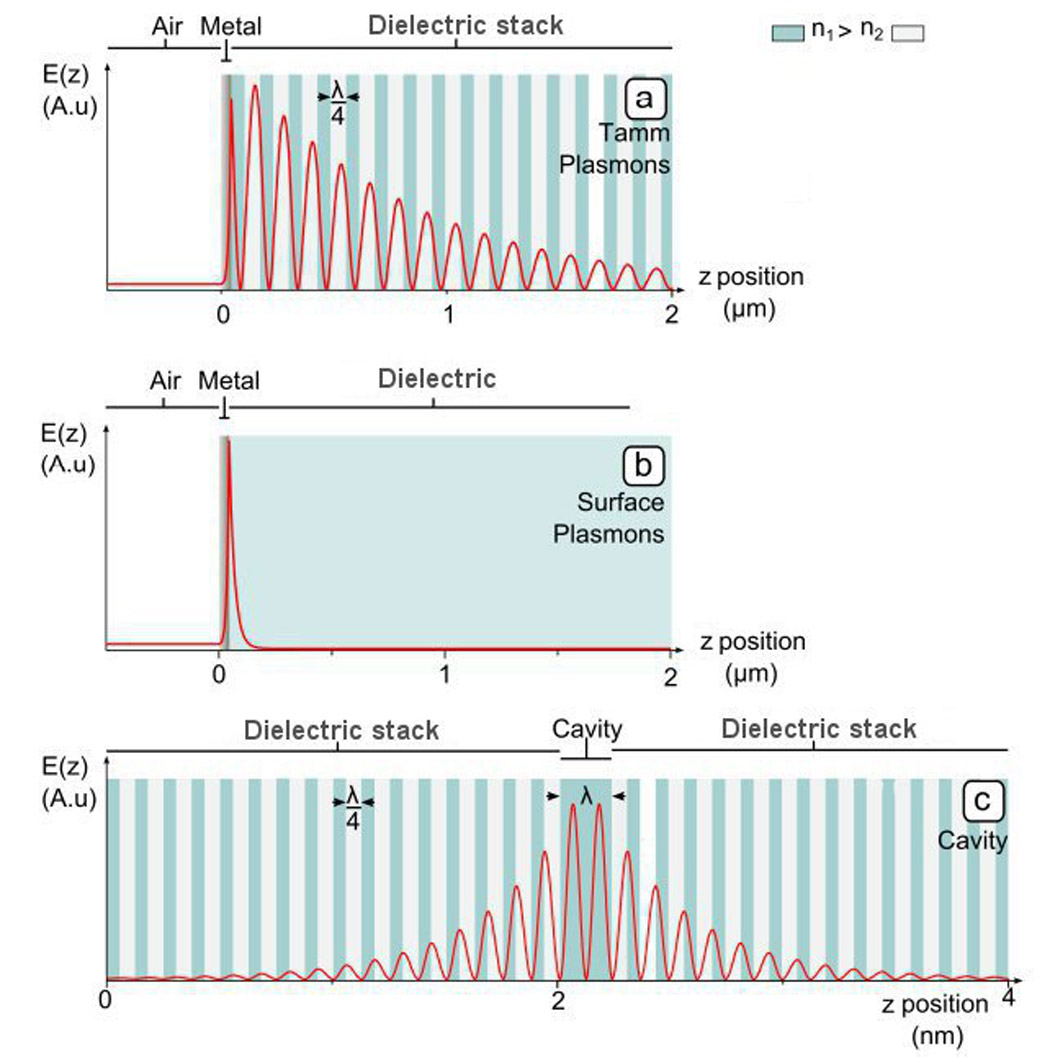 Our CTP lasers consist of a 40nm-thick layer of silver microdisks with various diameters (1–40μm), deposited on a 2D DBR formed by a slab of 30 aluminum arsenide/aluminum gallium arsenide (AlAs/AlGaAs) pairs. Two 9.5nm-thick indium gallium arsenide quantum wells were inserted into the five upper AlGaAs layers to form the active medium: see Figure 2(a). The light emitted from the quantum wells has a wavelength of about 853nm. We cooled the sample to 77K and optically pumped (a process in which electron energy levels are increased by incident light) with a 785nm laser. We then performed angular resolved spectroscopy on the emitted light using Fourier plane imaging. 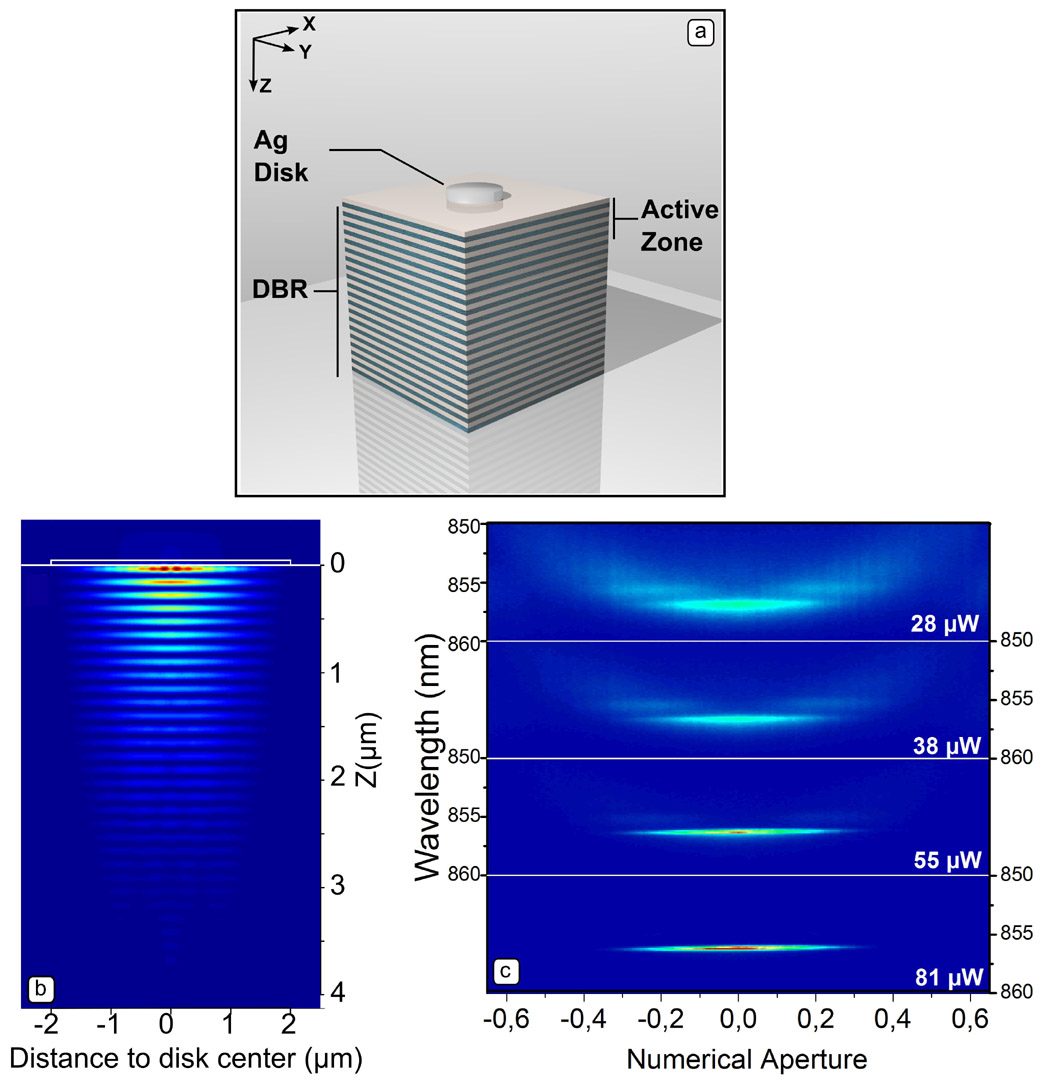 Figure 2. (a) Schematic representation of a confined Tamm plasmon (CTP) structure. The distributed Bragg reflector (DBR) consists of 30 aluminum arsenide/aluminum gallium arsenide (AlAs/AlGaAs) pairs, including two indium gallium arsenide quantum wells in each of the five topmost AlGaAs layers. Electron-beam lithography on resist and silver (Ag) evaporation are both used to define the disks on the DBR surface. (b) Calculated electric field for a 4μm-diameter CTP structure. (c) Measured dispersion relation of the emission of a 4μm-diameter CTP structure under increasing pump power.

Figure 2(c) shows the recorded dispersion relations of a typical 4μm disk under increasing pump power. At very low pump power (28μW), discrete modes lying at 855.7 and 856.9nm appear in the emission, which are related to the 3D confinement of the electric field. When the pump power rises, the emission intensity in the fundamental mode increases, and its spectral width narrows. The behavior of the emission as a function of pump power is summarized in the input-output curve shown in Figure 3(a). A clear nonlinear increase of the emission is observed for pump powers above 35μW, which is characteristic of the lasing effect occurring in the CTP structure. 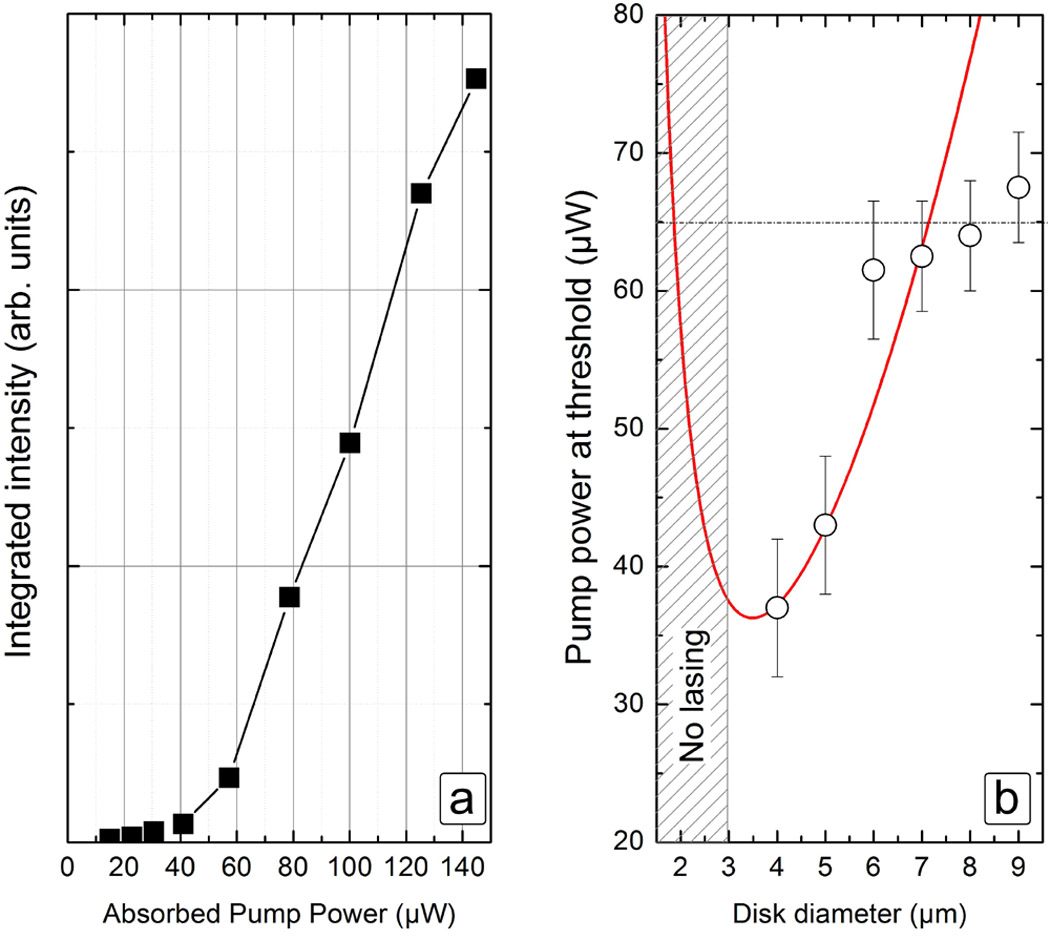 Figure 3. (a) Integrated emission of a 4μm CTP structure versus the pump power. (b) Experimental (open circles) and calculated (solid line) pump powers at threshold for different disk diameters. The solid line is scaled at the experimental threshold value obtained for a 4μm disk.

To study the impact of confinement on laser efficiency, we recorded the pump power at threshold for CTP lasers with disk diameters ranging from 4 to 9μm: see Figure 3(b). For disk diameters above 6μm, the recorded threshold values are almost constant (65μW) and decrease for smaller disks, reaching an optimal value of 37μW at 4μm. For disks smaller than 3μm, lasing could not be obtained. The existence of an optimal disk diameter for lasing arises as a result of two competing trends. When the disk size is reduced, the β factor of the structure increases due to the reduction of the mode volume. However, the quality factor (described by the optical frequency divided by the fractional power loss per round trip) decreases because of additional diffraction losses at the edge of the smaller disks. Using a simple model based on work by Bjrk and co-workers,15 we were able to confirm this interpretation mathematically. The theoretical values for pump power at threshold (scaled at the experimental value obtained for the 4μm disk) reproduce the behavior of the experimental results under 6μm fairly well: see Figure 3(b). The calculations show an optimal size in terms of threshold at around 3.5μm and a very steep threshold increase for disk diameters below 3μm. Above 6μm, the lateral extension of the mode does not follow the geometrical dimension of the disk used in the calculations.13

In summary, confined Tamm structures are promising systems for the development of hybrid metal/semiconductor lasers with optimized thresholds. The relative simplicity of fabrication of these structures, together with the high versatility offered by the metal patterning and their probable compatibility with electrical injection, make this approach very attractive for the development of new kinds of emitting devices. In the future we aim to electrically generate plasmon modes by coupling Tamm emitters to surface plasmons. We also intend to realize parallelized Tamm laser arrays, which could find application in sensing.