In today's computers, information is processed using electrical charges. Due to inherent physical limits, the shrinking of electron-based transistors to improve processing speeds is proving increasingly challenging. One approach to overcoming these limits is to replace electric currents with light. For this to work, we require tools that enable its effective manipulation.

Light oscillates in many different directions perpendicular to the direction of propagation. Polarized light, however, oscillates in only one direction. In certain materials, an applied magnetic field can rotate the polarization direction of light passing through. This phenomenon, known as the Faraday effect, causes an angle of rotation that is usually minutely small. However, two years ago we observed a giant Faraday effect after passing terahertz (THz) light through thin mercury telluride films under an applied magnetic field: see Figure 1.1With a wavelength of the order of one millimeter, THz light resonates at a frequency equating to the clock speeds expected from computers two generations away. The benefits of this technology are not limited to computing: controlling beams of THz radiation is important in many applications, including airport security and biomedical sensing. However, changing the polarization direction of light without a large part of it being lost is difficult. 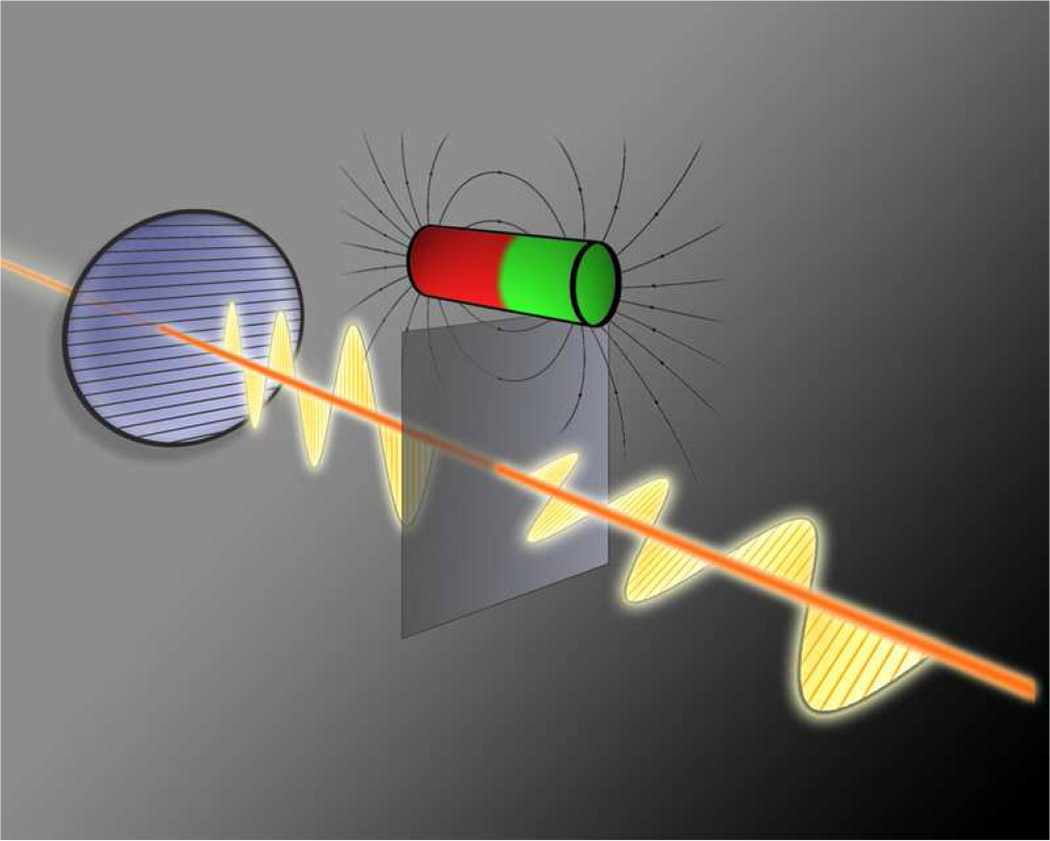 Figure 1. The oscillation direction of a polarized terahertz (THz) light wave is rotated as it passes through a thin film of mercury telluride (HgTe) under an external magnetic field.

In our experiments, we exploit the strong interaction between THz radiation and a solid-state plasma. Because of this interaction, left- and right-handed circularly polarized THz waves have different refractive indices when a magnetic field is applied. This property was recently proposed as a tool by which it may be possible to realize broadband THz modulators based on electron-doped indium antimonide (InSb) crystals.2 There are, however, two problems in realizing such devices for practical application. First, the giant Faraday effect in InSb does not survive at room temperature due to strongly enhanced carrier scattering. Second, this approach requires fast modulation of a moderate applied magnetic field—several hundred milliTesla (mT)—which is technically challenging.

In our experiments, we used thin films of mercury telluride (HgTe), a topological insulator. Topological insulators have attracted enormous interest over the past few years owing to the discovery of a number of nontrivial properties, including protected conductive states on the surface or edge of a sample.3 A number of unusual effects are theoretically predicted to occur during electrodynamic experiments on this material,4–7 including the universal Faraday effect and anomalous Kerr rotation (in which reflected radiation undergoes a large angle of polarization rotation). In addition, strain engineering of HgTe enables the suppression of effects from 3D carriers. When unstrained, HgTe is a zero gap semiconductor: there are always charge carriers present in the bulk material that disturb the observation of topological states. However, for strained thin films of HgTe, the energy gap becomes finite, which leads to a suppression of bulk carriers. Pure 2D electron behavior can therefore be expected from a strained sample, enabling the search for unusual electrodynamics, such as the giant Faraday effect.8

To achieve control over the Faraday effect in a constant magnetic field, preferably one that can be provided by a permanent magnet (<1T), we fabricated devices fitted with transparent gate electrodes: see Figure 2(a). In these devices, a thin film of HgTe is deposited on a cadmium telluride (CdTe) substrate. A semi-transparent gate made of ruthenium oxide (RuO2) is separated from the active layer of HgTe by a silicon nitride (Si3N4) insulator. This structure allows most of the light to pass through the sample while a gate voltage is applied. The electrodes enable us to change the carrier density (and thus the properties) of the electron plasma in the HgTe layer. By applying a moderate voltage of 9 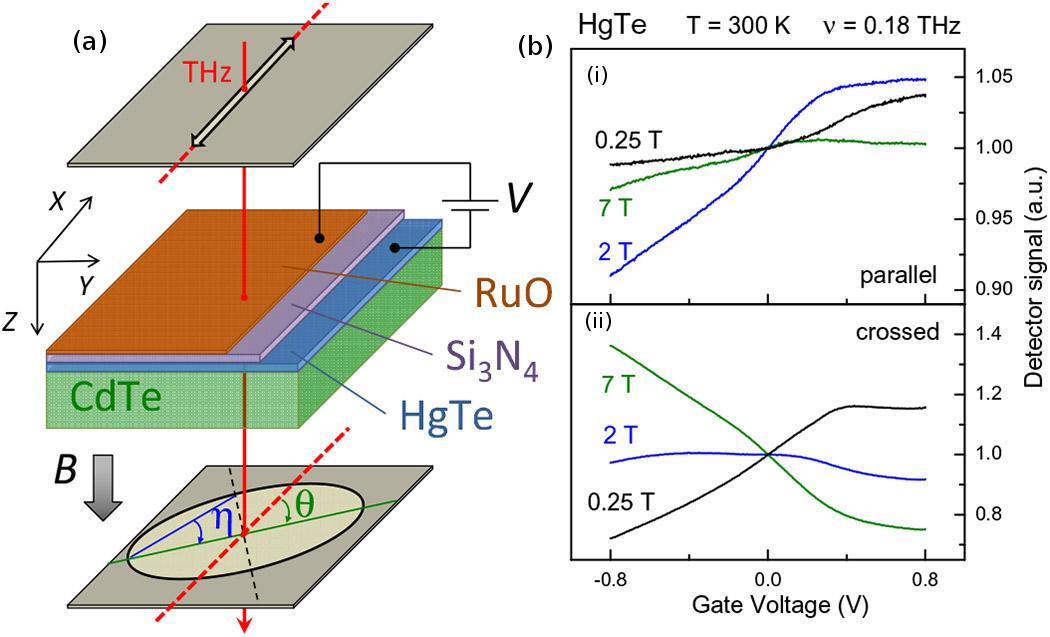 Figure 2. Electric voltage control of THz radiation. (a) Schematic representation of experimental arrangement to control the Faraday rotation (θ) and Faraday ellipticity (η) by gate voltage. A thin film of HgTe is deposited on a cadmium telluride (CdTe) substrate. A semitransparent gate made of ruthenium oxide (RuO2) is separated from the active layer of HgTe by a silicon nitride (Si3N4) insulator. This material enables most of the light to pass through the sample while a gate voltage is applied. (b) Normalized detector signal as a function of gate voltage in a geometry with (i) parallel and (ii) crossed polarizers. B: Magnetic field. a.u.: Arbitrary units.

When light is incident on a polarization filter, it passes through the filter or is blocked, depending on the polarization direction. In our device, the rotation of the beam of light passing through (and thus the electrical potential applied) determines whether or not a light signal is transmitted, thereby achieving the basic principle of a transistor. Figure 2(b)(i) shows experimentally observed changes in the component of the transmitted wave with the same polarization as the incident wave, while Figure 2(b)(ii) presents the variation in the component with the polarization orthogonal to the incident wave. Although it was not possible to completely block the radiation, a suppression of up to 30% was observed for the crossed signal.

Our results were obtained at room temperature, suggesting the possibility of practical applications. These could include direct control of polarization state by gate voltage and/or magnetic field, and fast phase and amplitude modulation. We believe that our technology will enable a high modulation speed comparable to that currently obtained by high-electron-mobility transistors.

In summary, we have been able to demonstrate that light can be tuned electrically. By passing THz radiation through a device based on a thin film of HgTe under a magnetic field, we achieved control of its Faraday rotation and ellipticity. This technology may find practical application in optical transistors of the future. We intend to further improve the modulation amplitude of our device (currently as large as several degrees per volt) by varying the barrier thickness and using a higher-quality HgTe layer.