Solar hydrogen production is enhanced by 200% by exploiting plasmon resonance in a photoelectrode composed of silver particles and zinc nanorods.

By learning from nature, it may become possible to realize efficient, stable energy conversion by developing photosynthesis technologies that use only earth-abundant materials and operate under mild conditions. In past decades, the photoelectrolysis of water has attracted continual interest as a potential route to sustainable hydrogen production for low-cost green energy.1–4 Water splitting is regarded as artificial photosynthesis in which materials convert the energy of sunlight into chemical energy to produce chemical fuels (hydrogen and oxygen). Our goal is to improve the efficiency of water splitting by photoelectrolysis using plasmonic resonance, that is, the coherent oscillation of free electrons in a noble metal driven by incident electromagnetic waves.

In a recent publication,5 we demonstrated the use of direct writing by a femtosecond (fs) laser to fabricate patternable plasmonic silver (Ag) particles from a silver(I,III) oxide (AgO) film. Figure 1(a) shows an artist's impression of a sample and its operating principle. The embedded Ag nanostructures serve as plasmonic couplers to enhance the photoactivity of a photoelectrode consisting of a zinc oxide (ZnO) nanorod array. In this configuration, plasmon damping can originate in the Ag nanostructures, producing both scattering and absorption behavior. The embedded plasmonics act as subwavelength scattering elements to trap randomly propagating plane waves into an absorbing semiconductor material by multiple high-angle scattering into the ZnO nanorods. This increases the effective optical path length in the photoelectrode. In addition, scattering from the plasmonics on the surface of the semiconductor may decrease the absorption of illumination by the bottom part. This effect can produce the largest field amplitude at the ZnO/Ag interface, which contributes to enhanced optical absorption over a broader spectral region. Thus, several complementary effects that result from localized surface plasmon resonance of embedded Ag nanostructures are simultaneously coupled to improve both the light absorption and charge carrier collection. The resulting plasmonic ZnO/Ag photoelectrode exhibits significantly enhanced solar hydrogen production.

The photoelectrode was fabricated as follows. First, a 15nm-thick AgO film was sputtered onto indium tin oxide (ITO) substrates. This was followed by direct writing by a fs laser beam. The AgO film was reduced to Ag particles at the laser focusing spot as it absorbed the laser's energy. A 15nm-thick ZnO film was then sputtered onto the surface of the metallic plasmon nanostructure to provide seeds for epitaxial growth of ZnO nanorods by a hydrothermal method. Figure 1(b) shows a scanning electron microscopy (SEM) image of the sample. The nanorods are dense (∼4×106 wires/cm2), and the cross-sectional image shows that they have lengths of ∼4μm and diameters of ∼150nm.

To further study the mechanism of the plasmonic enhancement, we examined the incident-photon-to-current efficiency (IPCE) spectra, as shown in Figure 2(a). We found an obvious enhancement of the IPCE when the ZnO/Ag photoelectrode was used. Two possible mechanisms are involved: a scattering effect and a plasmonic effect. A clear enhancement at 350nm can be observed in the IPCE spectra. At this wavelength, Ag shows strong electron damping and a lack of surface plasmon resonance, so the enhancement is due to light scattering from Ag nanoparticles beneath the ZnO. The other enhancement mechanism is plasmonic-induced resonant energy transfer, since the Ag particles serve as nanoantennas and capture the energy of the incident waves at plasmonic resonance.6 Therefore, the enhancement at about 420nm can be attributed to the presence of a plasmon-induced electromagnetic field, since the efficient plasmonic resonance wavelength of Ag nanostructures is located in this region.

This agrees with the results of a finite element method simulation, shown in the inset in Figure 2(a), and with the electric field intensity obtained using a full wave 3D Maxwell equation solver. The simulation results show a field enhancement of the Ag nanostructure on the surface of the ITO embedded in the ZnO under irradiation at 410nm. In addition, to simulate the real system of chemical reactions, all the calculated modules are constructed according to the SEM image: see Figure 2(b). Figure 2(c) shows the distribution of the electric field intensity corresponding to Figure 2(b) under x-polarized illumination at a wavelength of λ=410nm.

A 3D diagram of the field intensity is also plotted in Figure 2(d) to clearly demonstrate the spatial distribution of the electric field. It also reveals that the density of plasmonic hotspots in the laser-treated area is much larger than that in the unilluminated area. The reason is that the effects of the optical antenna make it possible for plasmonic nanoparticles to squeeze light into subwavelength spaces to convert optical radiation into the near field, which can enhance the field intensity. The subwavelength spaces between Ag plasmonic nanoparticles can generate a significant number of plasmonic hotspots associated with higher electromagnetic energy.

The time course of hydrogen production by the laser-treated embedded ZnO/Ag photoelectrode is presented in Figure 3. About 8.7 and 4.3μmol h−1of hydrogen molecules were generated by the ZnO/Ag and ZnO photoelectrodes under irradiation by AM1.5 illumination, in which the Faraday efficiencies were 63 and 58%, respectively. This result is consistent with the observed photoelectrochemical response, which indicated that the ZnO/Ag photoelectrode can produce about twice as much hydrogen as the ZnO photoelectrode. This successful realization of a plasmonically induced mechanism under irradiation by sunlight yielded exceptional performance in the photocatalytic evolution of H2. 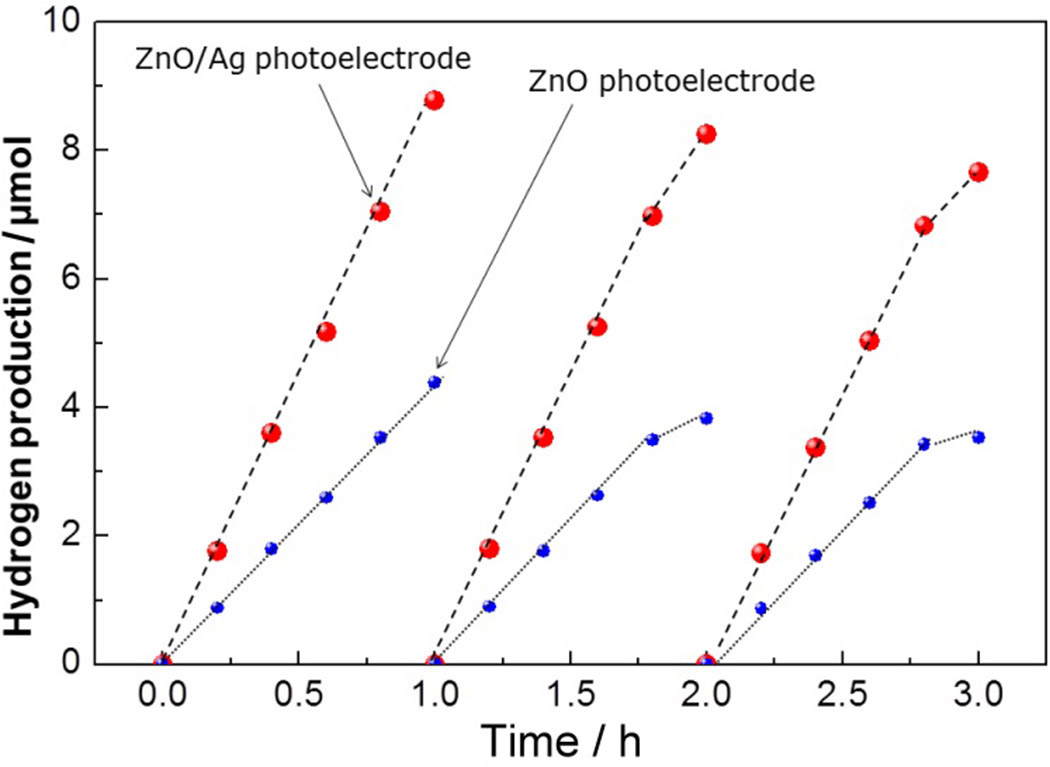 Figure 3. Measured hydrogen production of the ZnO/Ag plasmonic nanostructured photoelectrode (80mW) and ZnO photoelectrode under +0.5V vs. silver/silver chloride as a function of time under AM1.5G solar simulator illumination (100mW/cm2).

In summary, we studied an efficient method for large-scale fabrication of ZnO/Ag photoelectrodes to enhance the efficiency of photocatalytic water splitting. The plasmonic and scattering effects of the ZnO/Ag photoelectrode under irradiation by sunlight caused effective collection of charge carriers and exceptional performance in the photocatalytic evolution of H2, which allows an enhancement in hydrogen production of ∼200% compared to a device with only a ZnO photoelectrode. In our future work, we will develop a water-splitting system with a photoelectrode that can harvest energy across the entire solar spectrum.