X-ray free electron lasers (FELs)1—those that use an electron beam moving freely though a magnetic structure—are revolutionizing coherent lensless x-ray imaging.2, 3 However, achieving diffraction-limited resolution using softer x-rays (with wavelengths in the range λ of 1–40nm), requires illumination using up to several millijoules (mJ). When there is only one opportunity to image a sample (because of complexity or high cost, since the target is destroyed by the intense light), or for samples that absorb much of the incident radiation, we avoid blurring by illumination with a single flash lasting 100fs or less. Currently, only high harmonic (HH) lasers (where the frequency is determined by a separate, driving 'seed' laser) and soft x-ray FELs emit femtosecond-coherent pulses in the prescribed range of wavelengths, but with energy not exceeding 1μJ and 100μJ, respectively. Therefore, obtaining high-resolution images by these means remains a challenge.

An experiment conducted by Todd Ditmire et al. in 1995 was partially successful in increasing the energy of HH lasers.4 Testers amplified HH pulses in a plasma medium, matching the wavelength to a neon-like ion transition, and pumped to population inversion (an excited state). As a result, the seed laser signal was strengthened by a factor of 3. However, most of the energy was emitted during several hundred picoseconds as amplified spontaneous emission (ASE): that is, stochastic, non-coherent noise from the amplifier itself, which had a long gain lifetime (see Figure 1). By seeding plasmas of much shorter spontaneous emission (a few picoseconds), Ditmire finally increased the HH signal strength with negligible residual ASE.5, 6 However, the energy was limited to 1μJ, and the duration was still greater than 1ps. Despite several numerical studies to maximize the storage of energy in the plasma7, 8 and to optimize its extraction efficiency, it appeared that the setup could not amplify femtosecond HH up to the mJ level. Our modeling of Ditmire's experiment showed that the mismatch between the duration of the seed (tens of femtoseconds) and the amplification time (hundreds of picoseconds) was the origin of the strong ASE. 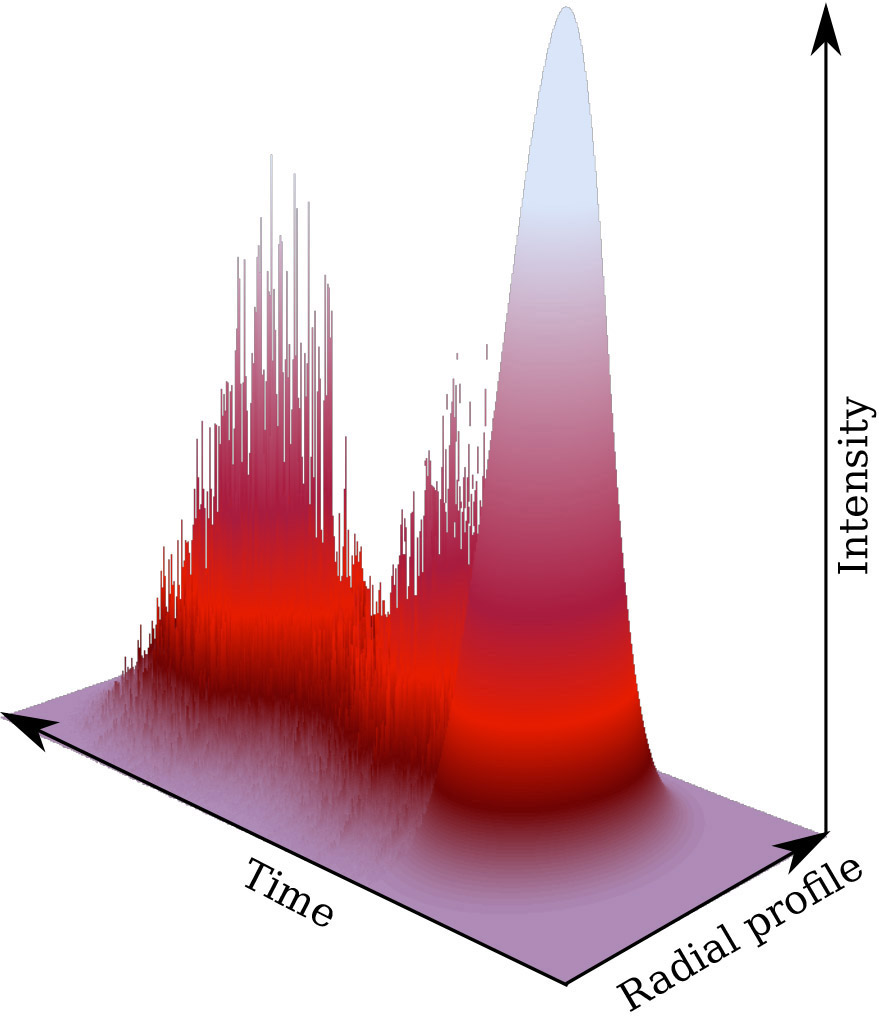 Figure 1. Model of an amplified high harmonic (HH) pulse followed in time by amplified spontaneous emission (stochastic noise, evidenced by the spikes) that carries most of the energy.

We considered a 1D time-dependent Maxwell-Bloch model,9 which couples the propagation and amplification of both the seed and spontaneous fields to the temporal evolution of the atomic levels in the lasing ion. The model showed that HH destroyed the population inversion, inhibiting the ASE during the amplification time. However, as long as the plasma remained hot (with a temperature of several hundred electronVolts, where 1eV ≈ 11600K), free electrons collided with the lasing ions and thus regenerated the population inversion by collisional excitation (see Figure 2). The time needed for the recovery is less than 2ps in these plasmas.10 After this period, the ASE is amplified during hundreds of picoseconds, since there is no more HH signal. Therefore, the total energy emitted during this long period is much higher than the energy of the HH amplified over less than 2ps. To overcome this effect, we proposed matching the duration of the HH with that of the population inversion using a chirped pulse amplification technique, whereby the laser pulse is extended temporally and its spectral components separated in time before being strengthened.11 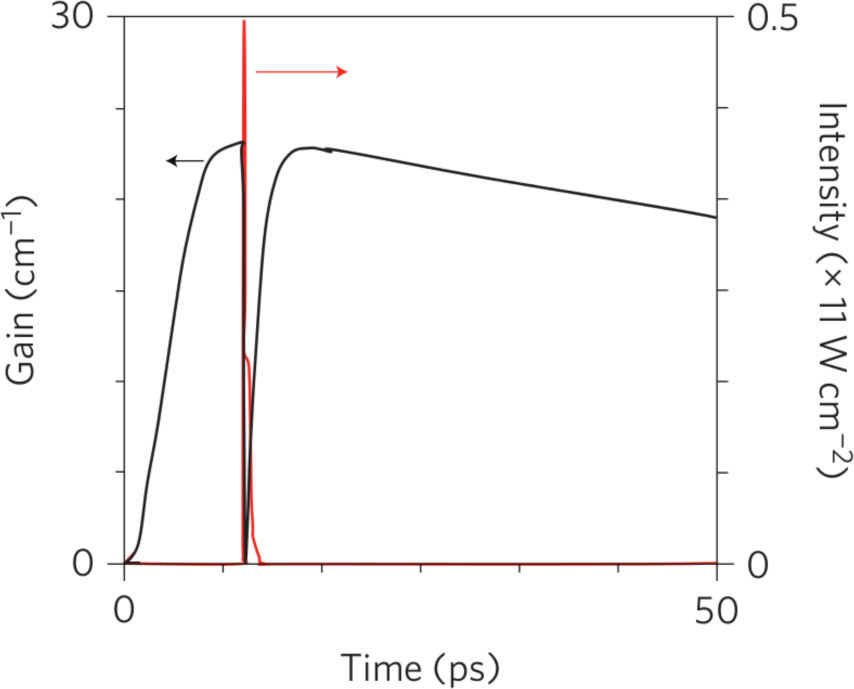 Figure 2. HH pulse intensity (red) and gain (black) after the HH has passed through a 4mm plasma amplifier.

Our model showed an amplified stretched HH, whose duration matched that of the population inversion (200ps in a similar plasma12). Since the HH spectral components of the pulse were now separated on the temporal domain, the gain profile given by our code was convoluted with the expected Lorentzian line. Analyzing the new profile, we could obtain the amplification of each component, which had also acquired different spectral phases when passing through the plasma, and used this information when computing the inverse Fourier Transform that models the recompression of the pulse. As a result, we obtained a beam of 5mJ (4×1015 photons) with a duration of 215fs (more than 20GW), which is 10,000 times more powerful than previous plasma-based soft x-ray lasers.

The pulse stretcher and compressor use pairs of gratings to take advantage of conical diffraction mounting (where the angle of the incident radiation is such that it diffracts along paths that form a conical shape).13 The technique can achieve an experimentally measured efficiency of around 70% in the range of wavelengths used (in our work, we assumed 50% efficiency for a single pass compressor). A high-intensity seed is beneficial to reach the saturation regime in a shorter pass,14 therefore, we preamplified the HH before stretching. Careful design at this stage was necessary to increase the energy of the HH to some μJ, while maintaining the femtosecond duration.14

One advantage of our approach is that it can be scaled down. If the application needs only several hundreds of μJ, it is possible to directly seed (without a preamplifier) a plasma with a gain duration of tens of picoseconds. In this case, our modeling suggests that 0.5mJ in 200fs can be obtained using a commercial petaWatt-class pump laser.

Our scheme overcomes some of the problems with current plasma-based soft x-ray lasers, including low energy and picosecond duration when seeded, poor spatial coherence, and hundreds of picoseconds duration when working in ASE mode. Future work will include 3D modeling (using hydrodynamics, atomic physics, and Maxwell-Bloch) and experimental proof of our principle.

The authors would like to thank L. Li, T. T. T. Le, K. Cassou, D. Ros, and P. Velarde for their fruitful discussions that contributed to this study. The work has been partially supported by SFINX-LASERLAB EC Seventh FP (grant agreement no. 228334) and the SHYLAX project from RTRA-Triangle de la Physique.