Commonly used lighting sources, such as fluorescent tubes or compact fluorescent lamps, provide only a fixed color temperature, which does not supply what one truly needs from the perspective of circadian rhythm. Accordingly, medical experts have called for the development of new lighting sources with low color temperatures—free of blue emission—to safeguard human health. 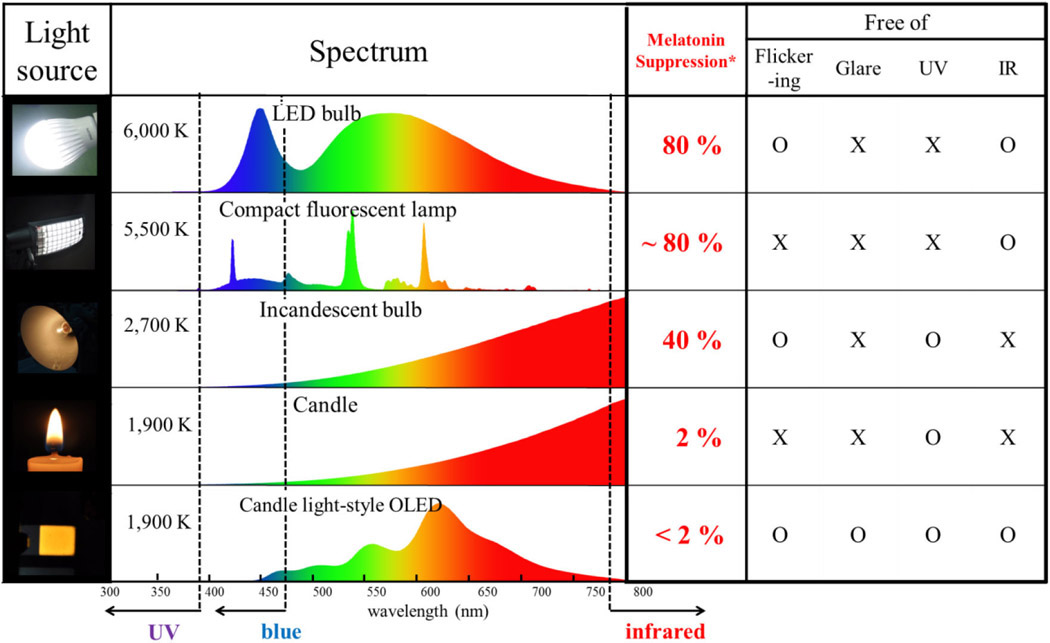 Figure 1. Comparison of the candlelight-style organic LED (OLED) with current lighting sources in terms of power spectrum, color temperature, and the characteristics of flickering, glare, UV emission, and IR emission. The candlelight-style OLED is a promising candidate for a blue-emission-free or low color temperature light source for illumination after dusk to safeguard human health since it further contains a high color rendering index.7 *: The melatonin suppression levels were obtained via interpolating or extrapolating from the experimental data originally reported by Kozaki et al.6 and re-plotted by Jou et al.8 The suppression was observed upon exposure to 100lux polychromatic light sources at midnight for 1.5h.6 x: Yes. o: No.

With this in mind, we designed a candlelight-style organic LED (OLED) as a lighting source with a low color temperature. The pseudo-candlelight OLED devices maximize red-dominant emission and minimize the blue counterpart. The devices are made of four organic electrophosphorescent dyes that are colored red, yellow, green, and sky-blue, and are deposited into two different emissive layers (one blue and one orange emissive layer). To attain high power efficiency, the emissive layers are sandwiched by two thin layers of light-emitting auxiliary materials that facilitate the transport of carriers (see Figure 2). These layers are further sandwiched by two additional carrier-injection layers to minimize the interfacial barriers between the organic molecules and inorganic electrodes. Aluminum is deposited as the cathode, and a transparent conductive oxide—indium tin oxide—is used as the anode. 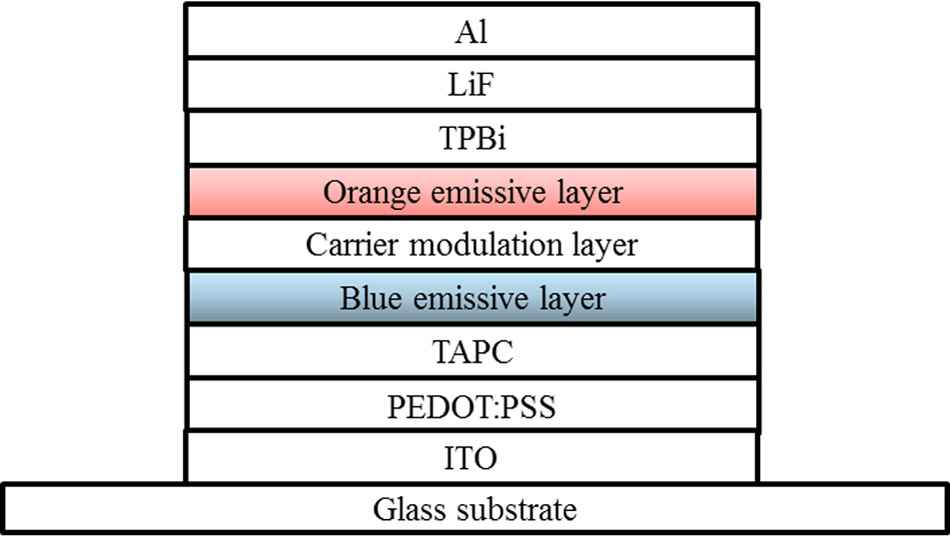 Figure 2. Schematic representation of the candlelight-style OLED. The blue emissive layer is composed of the iridium(III) complex known as Firpic and the polyaromatic compound TCTA as the host. The orange emissive layer is composed of the red dye Ir(piq)2(acac), the yellow dye iridium complex known as PO-01, the green dye Ir(ppy)3, and the polyaromatic compound TPBi as the host. 4,4'-Cyclohexylidenebis[N,N-bis(4-methylphenyl)benzenamine] (TAPC) and TPBi serve as light-emitting auxiliary materials. Lithium fluoride (LiF) and poly(3,4-ethylenedioxythiophene) poly(styrenesulfonate) (PEDOT:PSS) serve as the carrier injection layer. Al: Aluminum. ITO: Indium tin oxide.

The candlelight-style OLED has two additional features. First, its color temperature can easily be tuned to a lower value, such as 1800K, making it more physiologically friendly than candles. Low color temperatures can be achieved, for example, by reducing the concentration of the blue dye. By varying the device structure—for example, by changing the thickness of the emissive layer or carrier modulation layer—the color temperature can be modulated between 1600 and 2600K, covering a wider color span than that of the sun at dusk, which provides not only a safe light source but an aesthetically pleasing one.8 Second, the OLED yields no emission in the IR region, which is normally absorbed by the skin and then converted into heat to give a physical sensation. Instead, the OLEDs give a physically cold glow, but a psychologically warm sensation because their color is similar to that of fire.

In summary, we have developed an OLED that has variable color temperature devoid of blue emissions. Such a device would be useful to eliminate the potentially harmful effects that bluish white light has on MLT production. In future work, we will further maximize the color rendering index of these OLEDs to provide ultimate visual comfort and enhance the lifetime of the devices in an effort to make them commercially viable. We are also pursuing collaborations with lighting manufacturers to develop useful products for lighting after dusk.