Photonics research and novel applications require an ability to manipulate light. Much can already be achieved with natural materials, but their permittivity and permeability are limited. However, artificial metamaterials (MTMs), which are made of electromagnetic (EM) microstructures in deep-subwavelength scales, operate as an effective medium with almost arbitrary permittivity and permeability and thus offer greater freedom to control light. Homogeneous MTMs have been shown to offer interesting effects such as negative refraction and a perfect lens.1, 2 Slowly varying inhomogeneous MTMs have separately realized invisibility cloaking for propagating waves (PWs)3–5 and surface waves (SWs).6, 7

Recently, the extraordinary light-manipulation abilities of ultrathin MTMs (i.e., metasurfaces) with abruptly varying material properties have attracted much attention. A V-shaped antenna array metastring supports anomalous reflection and refraction of incident light but has the drawback of low conversion efficiency.8, 9 In previous work, some of us introduced a new metasurface that functions as the perfect link between PWs and SWs.10 Unlike with slowly varying inhomogeneous MTMs,3–7 EM waves do not stay inside ultrathin gradient metasurfaces for a long time. As a result there is less scattering, phase distortion, and dissipation. The metasurfaces offer great versatility for manipulating light, for instance, for anomalous reflection,8, 9 an antireflection coating, and a highly efficient surface plasmon polariton (SPP) coupler (an SPP is a quasiparticle of light and electron waves).10 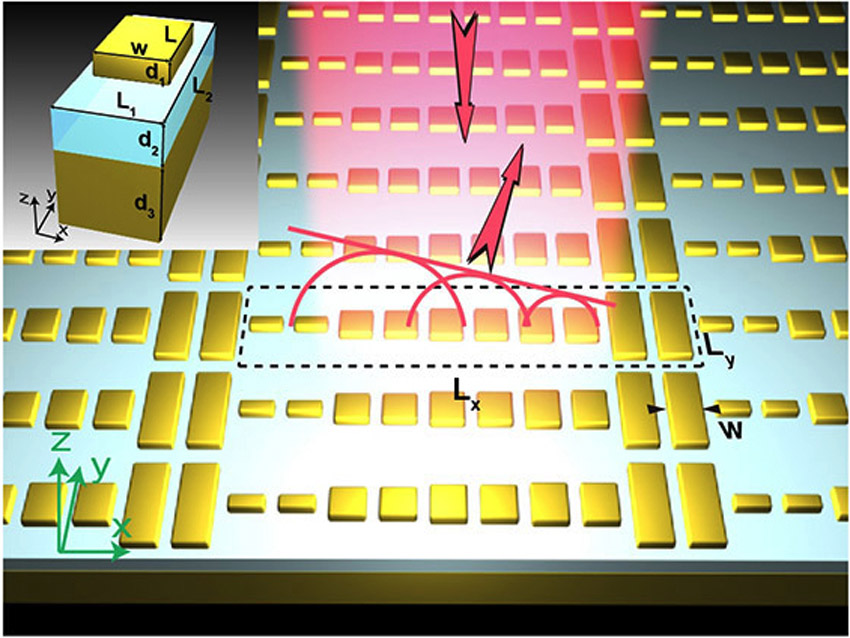 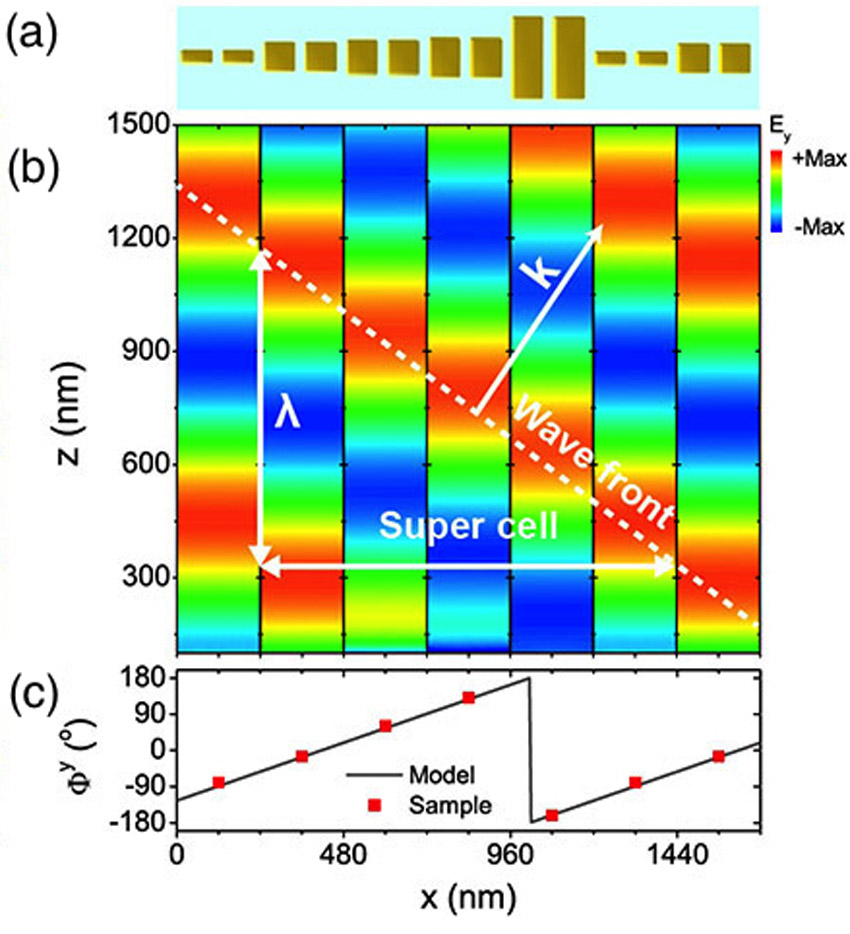 Figure 2. (a) Part of the metasurface. (b) Simulated scattered Eyfield patterns of the gradient metasurface illuminated by normally incident y-polarized light with λ = 850nm. (c) Reflection phase of each structure inside a super cell, with solid line representing Φy = Φ0+ξx(ξ = 0 .708k0). k: Wave-vector. 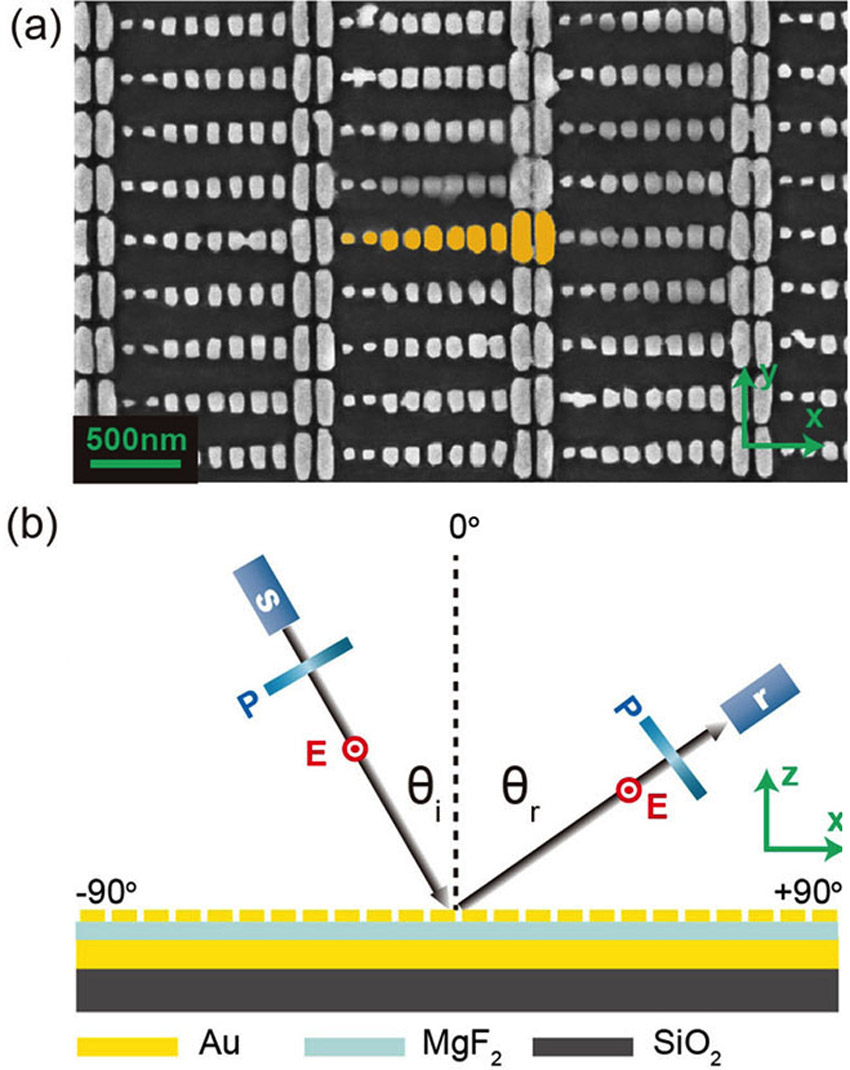 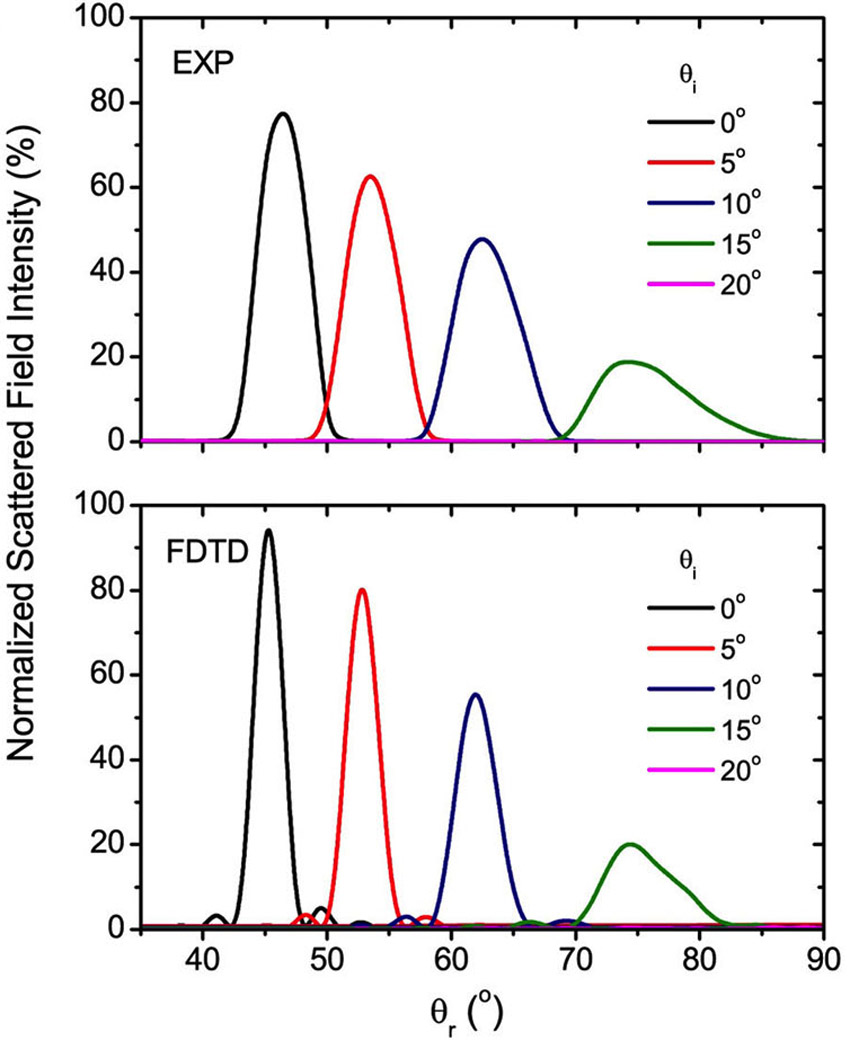 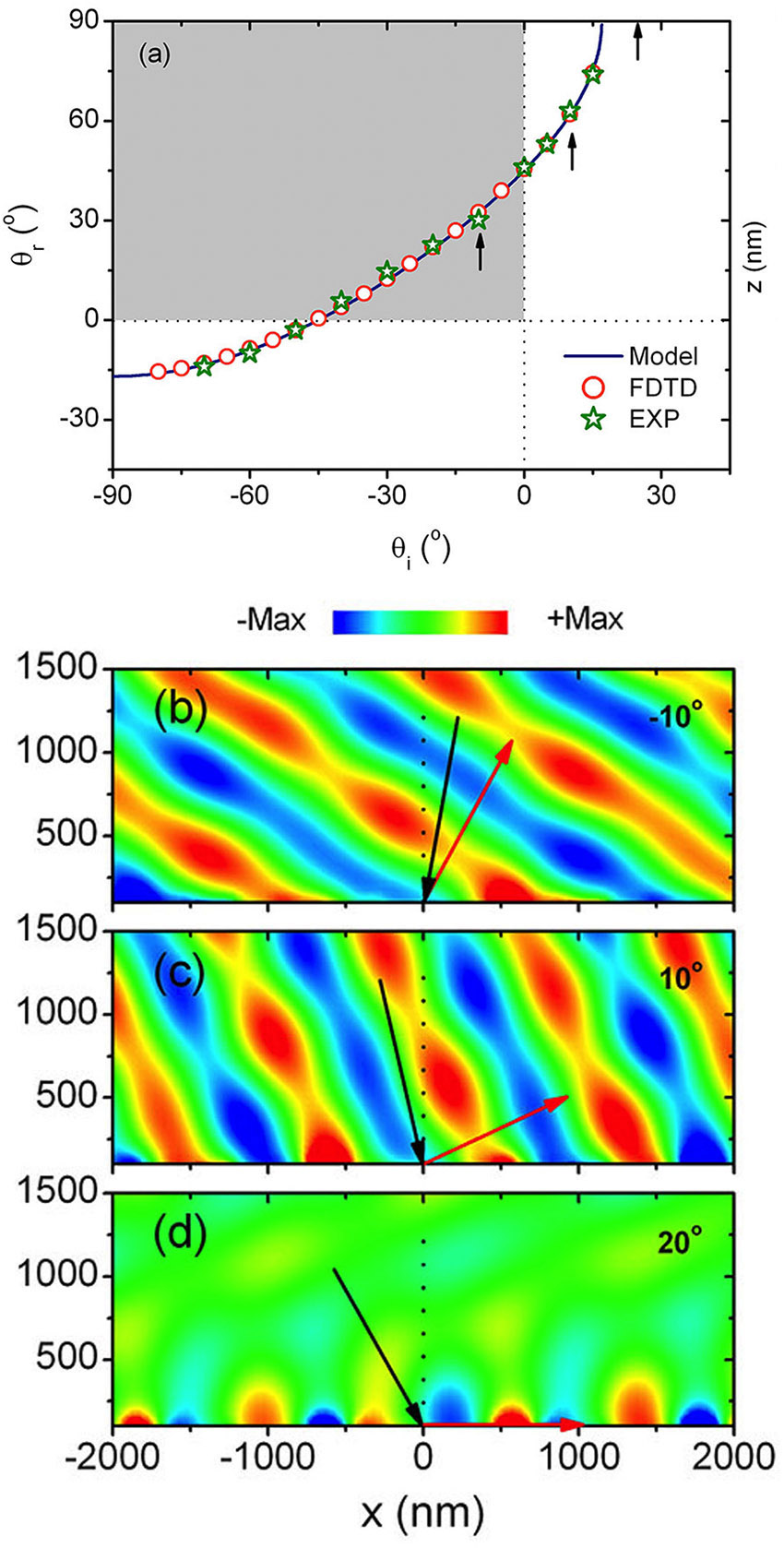 However, all these MTMs either exhibit cross-polarized low-efficiency anomalous reflection/refraction or operate only in the microwave regime. We have designed and fabricated a gradient metasurface that can redirect incident light to a single anomalous reflection mode with conserved polarization: see Figure 1.11 When the incident beam arrives at the metasurface, the waves are re-radiated from different units with linear reflection phases. They thus form an oblique wavefront: see Figure 2. Such anomalous reflected PWs carry a parallel wave-vector kx=ξ contributed by the radiation phase gradient of the metasurface.8–10 For the oblique incident case, the wave-vector of the reflected beam becomes

where θi is the angle between the incident light and the normal to the surface, k0 is the wave-vector in a vacuum, and ξ is the parallel wave-vector contributed by the radiation phase gradient of the metasurface. This equation corresponds to the generalized Snell's law8, 9 and can be rearranged as

Equation 1 determines a critical incident angle θic= sin−1(sin 90°−ξ/k0) beyond which the incident PWs will be converted to SWs bounded on the metasurface.10 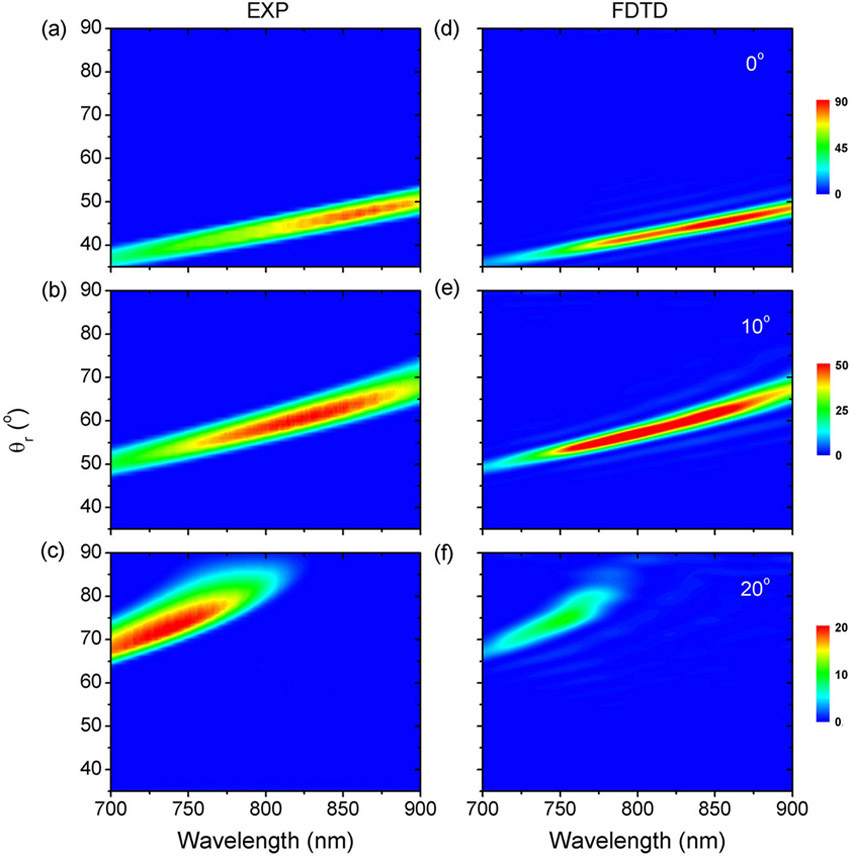 Figure 6. Normalized scattered field intensity P(θr, λ)/P0as a function of wavelength λ and reflected angle θr, obtained by experiments (a–c) and FDTD simulations (d–f). The incident angles of the input beams are 0° (a, d), 10°(b, e), and 20° (c, f), respectively.

Figure 3(a) shows the scanning electron microscopy picture of part of one representive sample with a total size of 600 × 600μm2. To fabricate the sample, a 130nm-thick gold film and a 50nm-thick magnesium fluoride (MgF2) film are first deposited on a quartz wafer in sequence by electron-beam evaporation, and a 30nm-thick nanorod array is then patterned on the MgF2 film with standard electron-beam lithography. We performed far-field measurements to demonstrate its scattering properties based on an experimental setup shown in Figure 3(b). The incident beam is projected on the metasurface with a tunable incident angle θi by a fiber source ‘s’ (with diameter 600μm). The scattered field intensity P(θr, λ) is collected by a fiber receiver ‘r’ (with diameter 600μm) at different reflected angle θr. Here the electric fields are all polarized along the y direction. Figure 4 shows the normalized scattered field intensity P(θr, λ)/P0 as function of θr obtained by both experiments and finite-difference-time-domain (FDTD) simulations. For different incident angles, the reference signal P0 is always chosen as the reflected field intensity at θr = 20° while the incident beam is projected on a 600 × 600μm2 flat gold mirror at θi = 20°. The anomalous reflections appear at specific θr. For light incidents at 0°, the conversion efficiency from incident light to anomalous reflection is larger than 80%. Due to the intrinsic limit of the experimental setup, we cannot measure reflected signals across the full range of potential angles (−90° to 90°). Fortunately, FDTD simulations show that only the anomalous reflection mode is dominant and all other modes (specular and −1 diffraction modes) are suppressed.11 Such a high conversion efficiency is not achieved in the previous metastring of V-shaped antennae,10 which supports substantial normal reflected/refracted modes and thus takes away some energy. Also, the anomalous reflection angle θr increases when the incident beam is more oblique. When θi = 20°, the scattered field peak disappears.

Several unusual reflection behaviors are realized in our system. Figure 5(a) demonstrates the generalized Snell's law represented by Equation 1 by comparing experimental results (green stars) and FDTD simulations (red circles). All measured results are in perfect agreement with the theoretical prediction (blue line). In Figure 5(a), the gray region (−45° < θi < 0°) indicates that the incident beam and reflected beam stay on the same side of the normal to the surface. This ‘negative reflection’ is illustrated by the simulated scattered Ey field distribution for θi = −10°: see Figure 5(b). Figure 5(c) shows the positive anomalous reflection for the θi = 10° case. However, beyond a critical incident angle θic= sin−1(sin 90°−ξ/k0)≈17°—for example, θi = 20°—the reflected wave will carry a parallel k vector larger than k0 and thus become an SW bounded at the metasurface: see Figure 5(d).

Now we show the broadband functionality of our metasurface. Figure 6 shows the normalized scattered field density P(θr, λ)/P0 as a function of reflected angle θr and working wavelength λ while the incident angles are 0, 10, and 20°, respectively. Both experiments and FDTD simulations demonstrate that the anomalous reflection appears in a broad wavelength region and θr increases with λ. This behavior is explained by Equation 1. To a good approximation, ξ does not change significantly within the studied wavelength region. Equation 1 determines that the reflected angle θr is proportional to ξ/ k0 (or ξλ/2π) for a given value of θi. Therefore, the metasurface will scatter the different frequency components of the incident beams to different anomalous directions obeying the generalized Snell's law and thus functions as a high-efficiency spectral beam splitter.

In conclusion, we have designed and fabricated a gradient metasurface that guides an incident beam to a non-specular channel or to a bounded SW controlled by the incident angle. Both experiments and FDTD simulations demonstrate that the conversion efficiency from input beam to anomalous reflection mode is up to 80% at the central working wavelength of 850nm and the operation bandwidth is larger than 150nm. Compared to a previous metastring of V-shaped antennae, our system supports only a single anomalous reflection mode and conserves the polarization of the incident light. Our findings will stimulate many applications such as polarization and spectral beam splitters, anti-reflection coatings, and light absorbers. We are now working to realize these.

Shulin Sun is now an associate professor in the Department of Optical Science and Engineering, Fudan University, China. His research interests include metamaterials, plasmonics, and whispering gallery microcavities.