How small can a nanolaser be?

The progress towards increasingly smaller semiconductor lasers is impeded by various obstacles, such as high current density and power dissipation and low coherence in small devices.
10 September 2013
Jacob Khurgin

Recent years have seen a burst of activity in nanophotonics directed towards the development of functional integrated optical circuits capable of augmenting, if not supplanting, the integrated electronics circuits of today. Researchers have achieved considerable progress in developing miniature passive (waveguides, couplers, and diffractive elements) and active (modulators and lasers) components, with the first integrated circuits already being commercialized. One of the main obstacles to further increasing the density of integration—the number of devices per unit area—is the diffraction limit, which precludes shrinking the circuit dimensions to below roughly half of the operating wavelength. The diffraction limit is insurmountable in all-dielectric (including semiconductor) optical devices, but it can be circumvented when metal is introduced to the circuit.1 This has given impetus to new research in the fields of nanoplasmonics and metamaterials.

Surpassing the diffraction limit, however, does not come for free: as a large fraction of energy gets concentrated inside the metal, the optical losses increase. One way to mitigate this loss is to compensate with gain, such as with electrically pumped gain in a semiconductor. For example, a semiconductor with an injected carrier density of 1019cm−3 is capable of compensating the metal loss, and even surpassing it, leading to stimulated emission and lasing. This creates an opportunity to develop efficient sub-wavelength sources of coherent radiation, such as plasmonic nanolasers2 and spasers.3 The latter term stands for surface plasmon amplification by stimulated emission of radiation—see Figure 1(b)—and it refers to a device that emits surface plasmons (a combination of photons and free-electron oscillations in the metal) rather than emitting photons. In addition to their small size, advantages of both spasers and nanolasers include density of integration, reduced power consumption and heating, and, most importantly, high modulation speed, which can be of a few terabits per 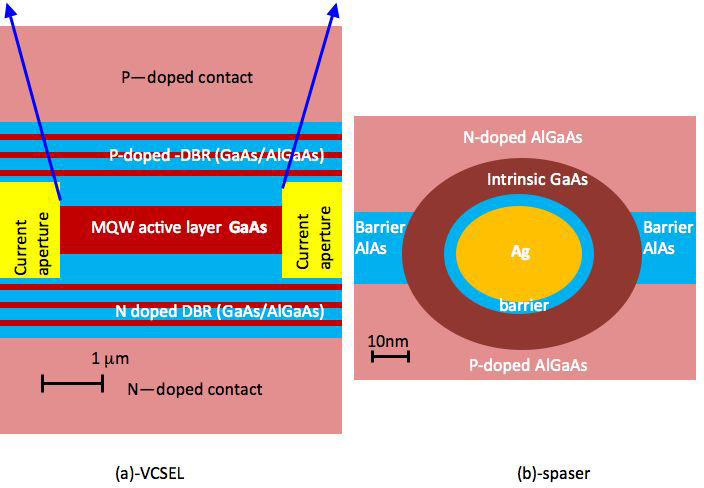 Prompted by this promise, various research teams have been actively pursuing the goal of miniaturizing lasers using various metal-semiconductor structures. However, the goal of achieving electrically pumped room-temperature lasing in a structure that is sub-wavelength in all three dimensions remains elusive. Here, I offer a critical assessment of the various obstacles impeding the progress towards a sub-wavelength injected pumped laser. I also investigate if and how these obstacles can be overcome and, if so, whether the advantages of nanolaser over conventional slightly bigger sources, such as vertical cavity surface emitting lasers (VCSELs)—see Figure 1(a)—will be worth the trouble.

First of all, for practical considerations one must keep in mind that to provide the gain in the laser, it is not the carrier density that is crucial, but the current necessary to maintain such carrier density.4 Furthermore, we can only talk about lasing, i.e., stimulated emission of coherent phonons, if at the very least a single photon is present at all times in the cavity. In the optical and near-IR ranges, the loss in the sub-wavelength metal cavity is always of the scale of one photon lost every 10 femtoseconds, meaning that at least one electron-hole every 10 femtoseconds must be injected to maintain the gain. This leads to a threshold current of about 10−4A, which is only slightly less than the threshold current in VCSELs. A colleague and I showed in previous work that this value does not depend on the shape of the cavity and, unlike the case for normal lasers, it does not decrease with the size of the laser.5 As the size of the nanolaser shrinks, the current density increases up to tens of mega-ampere per square centimeter for ∼50nm lasers, which is many orders of magnitude higher than the current density in conventional lasers. While we can achieve such current densities in the best electronic devices for the electrons, these densities are extremely difficult to obtain for the holes.

The second issue impeding nanolaser performance is that the linewidth of a device that is sub-wavelength in all three dimensions always remains very broad: of the order of hundreds of gigahertz. This value is in contrast to the sub-megahertz linewidths obtainable in conventional lasers. This has to do with the fact that the cavity of the nanolaser is very small and can contain a few photons, and also because of large losses in the metal. Hence, it is difficult to see how the nanolaser can be a source for the advanced coherent modulation formats (for instance phase modulation) that are becoming prevalent in modern communications.

Finally, the modulation speed of the semiconductor laser depends on the electron and photon relaxation rates (which are indeed very fast in plasmonic devices), but also on the number of photons in the mode and differential gain (change of laser gain with change in carrier density). Both of these parameters are low in plasmonic lasers and, as a result, the modulation speed cannot exceed 100Gbit/s, which is not much higher than that of VCSELs operating today.

While it is unwise to render a categorical negative judgment on all nanolasers, we can see that the threshold current densities in all structures that are sub-wavelength in all three dimensions will likely always remain orders of magnitude higher than in conventional lasers. Further, the power dissipation will be higher than in VCSELs, the coherence will be too low, and the speed will not be as high as hoped. Thus, the small lasers of the future will probably use metal to reduce the cavity size, but not in all three dimensions.6 Alternatively, fast incoherent sub-wavelength sources based on surface plasmon emission may also find their application niche. Future research should concentrate on finding solutions for specific technical problems requiring miniature light sources; whether the solution is a sub-wavelength laser or not remains to be seen. These are topics I will be focusing on in the future.

Jacob Khurgin has been a professor of electrical and computer engineering at Johns Hopkins since 1988. He is an author in about 300 refereed papers and six book chapters, and holds 28 US patents.