A thermal measurement system architecture designed for real-time, long-term monitoring of transportation infrastructures was evaluated on a bridge in Switzerland.
23 January 2014
Jean Dumoulin and Rodolphe Averty

The transportation system consists of an interconnected infrastructure—highways, transit systems, railroads, airports, waterways, pipelines, and ports—and many types of vehicles, aircraft, and vessels that operate along these networks. When natural disasters, extreme weather, or terrorist actions affect these critical infrastructures, a rapid, accurate damage assessment is necessary. By collecting real-time sensory information and images that detail the status of critical transportation infrastructures, decision support and damage analysis can be improved during an emergency. In addition, long-term, permanent monitoring allows stakeholders to evaluate how structures are aging.

Nondestructive electromagnetic monitoring and surveillance can be used to reliably and wirelessly assess the status of transportation infrastructures, including detecting surface alterations and defects, and monitoring structural integrity. As part of the European Commission-funded Integrated System for Transport Infrastructures surveillance and Monitoring by Electromagnetic Sensing (ISTIMES) project,1 we developed a stand-alone infrared imaging system architecture (including software and hardware) to monitor transportation infrastructures in real time for long periods (see Figure 1).2 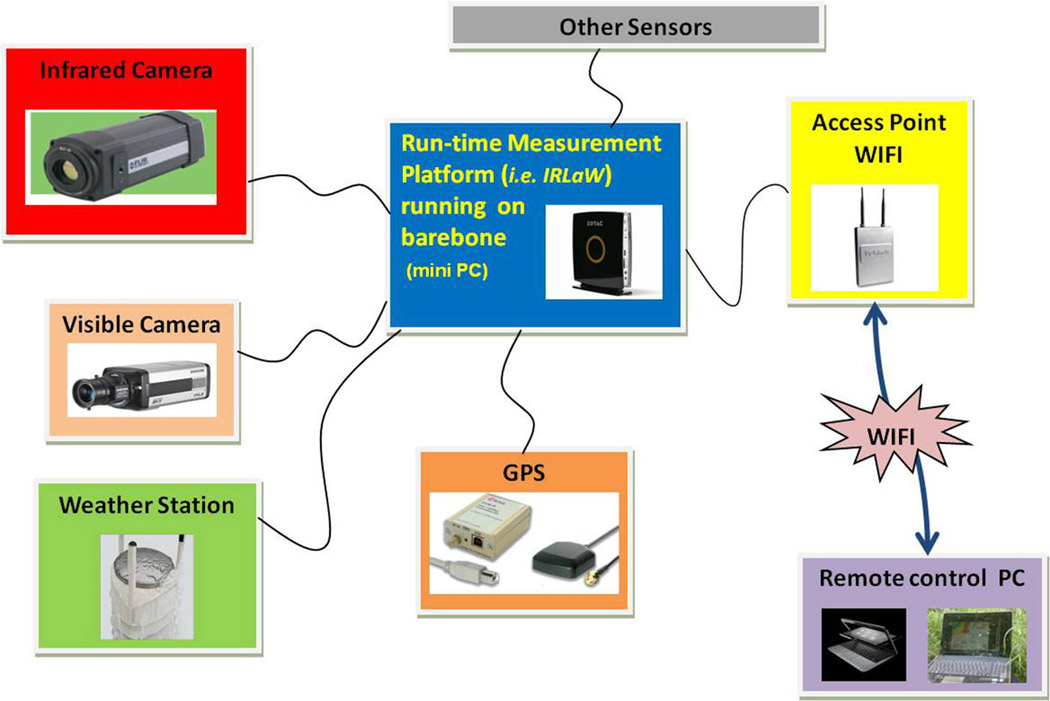 The system includes a low-cost, commercially available infrared thermal camera, FLIR A320,3 which operates in the 8–12μm spectral range and is equipped with an uncooled microbolometer focal plane array. A computer with a graphics processing unit4, 5 produces corrected thermal maps of the surveyed structure using simplified radiative models. In addition, a weather station6 and a global positioning system7 (for timing and localization) are synchronized with the infrared camera to correct inline thermal measurements. We also developed a human-machine interface called Infrared Thermography through Lan and WiFi (IrLaW) using Linux, open-source software, and complementary software developed at the French Institute of Science and Technology for Transport, Development and Networks (IFSTTAR). The IrLaW software allows users to acquire raw temperature data and apply complex radiometric models to the data for real-time processing. The models are dynamically configurable and receive data in real time from various sensors (e.g., the weather station). IrLaW functionalities include image averaging, setting the number of frames per thermal image sequence saved, and changing the sampling frequency during acquisition with no interruption. The system can be remotely controlled in wired or wireless communication modes, depending on the application and accessibility to the system when it is running in the field. The architecture also allows users to retrieve data on demand if necessary.

Using infrared imaging to detect and characterize damage to a roadway or bridge can be complicated by many factors that affect the thermal and optical properties of the structural material (see Figure 2). These properties include the conductivity, diffusivity, and specific heat of the structural material. Spectral properties—such as emissivity, absorption, reflection, and transmission—also play a key role in the heat distribution of the material. Other properties that influence the thermal behavior of a material are related to its porosity, volumetric mass, and water content. Environmental conditions, combined with a structure's thermal properties and status, drive the structure's specific thermal signature with time.

When infrared thermography is used in the field, real-time thermal radiative corrections of the raw data are required to account for influences by the natural environment evolution with time. Commercially available uncooled infrared cameras integrate an inline radiative correction for stable environments (i.e., laboratory conditions) using the following formula:

where τ is the transmission coefficient, ε is emissivity, and DL is the digital level at the detector outlet (DL is connected to the apparent surface temperature through radiance, L, in the spectral bandwidth of the infrared camera by using adequate calibration laws). The subscripts indicate contributions from the object (o), environment (env), and atmosphere (atm). However, this correction is not applied independently to each pixel of the sensor with time- and space-varying parameters.

In May 2011, we placed the measurement system and an uninterruptible power supply on a sign deck above the Sihlhochstrasse bridge in Zurich, Switzerland (see Figures 3 and 4). The Sihlhochstrasse bridge, built in 1973, is one of the longest bridges in Switzerland, with a length of 1.5km. During the field test, we acquired corrected data at a frame rate of 0.1Hz by averaging 50 thermal images with an initial fixed camera frame rate of 5Hz. Each hour, a thermal image sequence was stored on the internal hard drive of our system and data were retrieved using a wireless connection on a notebook computer (see Figure 5). During our experiments, the sun's course was perpendicular to the main direction of the bridge, which induced a transverse thermal gradient at the deck level for a period during thermal loading (in the morning) and thermal relaxation (at the end of the afternoon and evening).

Figure 3. Photographs of the Sihlhochstrasse bridge with a red circle indicating the test site (left) and the infrared camera's field of view (right). 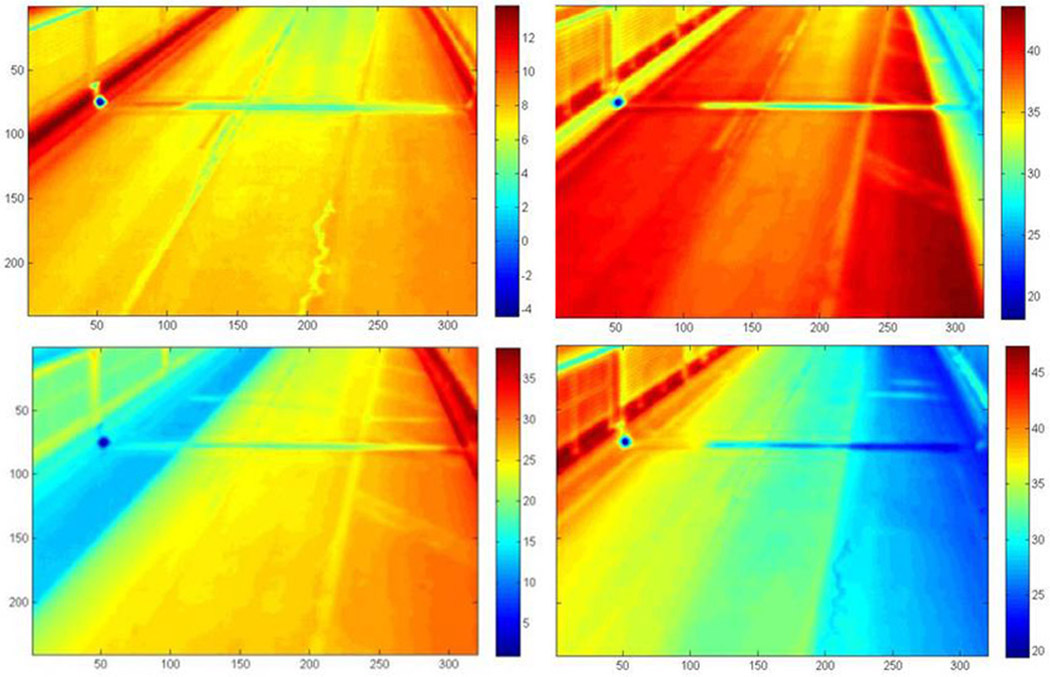 We analyzed the thermal behavior of the deck in three locations over two days (see Figure 6). The first day was affected by periods of cloudiness (sun masking) and the second day was sunny with periods of cloudiness during the night. The thermograms showed that the measurement system was sensitive to environmental perturbations during the day and night, even with traffic flowing on the bridge. 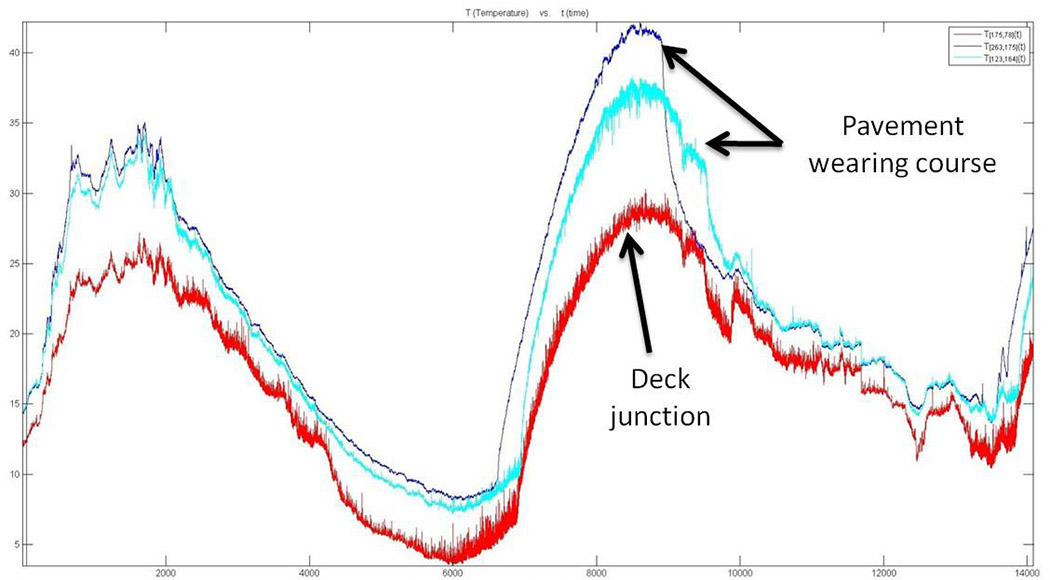 Figure 6. Temperature measurements collected over two days at three locations on the surface of the bridge deck.

Real-time, long-term monitoring of transportation structures requires development of a standard system with multiple-sensing capabilities that is linked to a communication network that is accessible and compliant with multiple wireless communication channels (from standard wireless to general packet service radio). The system we developed satisfies these requirements and was successfully used to collect real-time corrected apparent surface-temperature measurements of the Sihlhochstrasse bridge. In the future, we plan to extend this work by conducting in-depth inspections of the areas of the bridge that showed superficial discontinuities and subsurface defects in the structure, such as initial detachments or water infiltration. Thermal imaging can be used to identify subsurface nonuniformity because the heat flow from the surface to the inner structure is affected by defects and inhomogeneities present in the structure. In addition, long-term thermal imaging monitoring could be used as a complementary input for structural health monitoring and vibration-based methods. The technique could also enable the identification of thermal gradients inside the structure over time and provide more accurate corrections for thermal effects in structural analysis methods.

Future work will also include field-site experiments that last more than one year to evaluate different processing approaches for data reduction and analysis. We will also address complementary correction of infrared measurements by introducing environmental radiative data from additional sensors (e.g., pyrgeometers and pyranometers) into the model. Finally, weather measurements will be analyzed inline to allow tagging of thermal image sequences and adapted processing of observed events.

Jean Dumoulin holds a PhD in energetic systems from the National Institute of Applied Sciences (INSA) in Toulouse. Following positions as associate research engineer in the former Department of Studies and Research in Mechanics and Energetic Systems at ONERA-CERT and associate lecturer at INSA Toulouse, he joined IFSTTAR in 1997. His research interests include infrared thermography, heat transfer, and monitoring using imaging techniques.

Rodolphe Averty worked for eight years in the embedded computing industry before joining IFSTTAR in 2009. After earning his master's degree in computer engineering at IFSTTAR, he joined the high-technology consulting and engineering company AUSY in 2011.