Surveys of coastal habitats conducted from aircraft usually employ simple cameras that measure light reflected from the water in three primary wavebands to give a red, green, and blue (RGB) image. This simulates the human eye, which has so-called RGB photoreceptor cells (cones with peak absorbance at 564, 534, and 420nm) that give rise to human trichromatic color vision.1 Digitizing features from photographs can be painstaking and subjective, and the primary features must often be known in advance. For example, beds of seagrass absorb visible light for photosynthesis and make images look darker to the eye. Such dark patches, however, may also be caused by other types of seafloor—benthic—habitats. These habitats include dense macroalgae, sediment biofilms, or light-absorbing compounds in the water column such as phytoplankton or gilvin (colored dissolved organic matter).2

Advanced hyperspectral airborne sensors, which can detect the full spectrum of light, are increasingly being used to characterize benthic habitats.3 These imaging spectrometers provide a spectral fingerprint that can be used to assess water column properties. The depth and color of the seafloor can be analyzed when the water is optically shallow and photons that are reflected from the seafloor are detected at the sea surface. Recently, sensor technology has improved so that new imaging spectrometers are able to discriminate dark coastal waters, i.e., where radiation leaving the water contributes only a few percent of the total light detected by the sensor. The majority of the signal arises from light scattered within the atmosphere and off the sea surface as glint. This signal needs to be eliminated through a complex process called atmospheric correction.

We have used data from the NASA-funded Portable Remote Imaging Spectrometer (PRISM), which was built at the California Institute of Technology's Jet Propulsion Laboratory (JPL), to assess the spectral properties of the dark, and variable, coastal regime.4 The instrument is uniquely tailored to study the coastal environment using a combination of features. The sensor has a large dynamic range that is enabled by rapid readout and high optical throughput, a broad spectral coverage (350–1050nm, with additional channels at 1240 and 1610nm), high spectral cross-track and instantaneous field of view (>90%), and high radiometric calibration accuracy.

We conducted a validation campaign for PRISM in Elkhorn Slough, California. This estuary provides a critical habitat for many threatened and endangered species, including marine mammals, sharks, and birds, and has been facing unprecedented rates of tidal marsh loss over the last 70 years. The field campaign took place between 18 and 27 July 2012.

We measured sea spectral reflectance from a small boat at the same time as the PRISM field validation flights were conducted by our collaborators at the Naval Research Laboratory.5 The atmospheric correction process did not use any field spectra, and the resulting data closely matches the field observations (see Figure 1) without the need for extra filtering or smoothing. The difference in the magnitude of the two eelgrass spectra is due to slight differences in the tidal cycle and therefore the water depth between the boat and the overflight measurements. 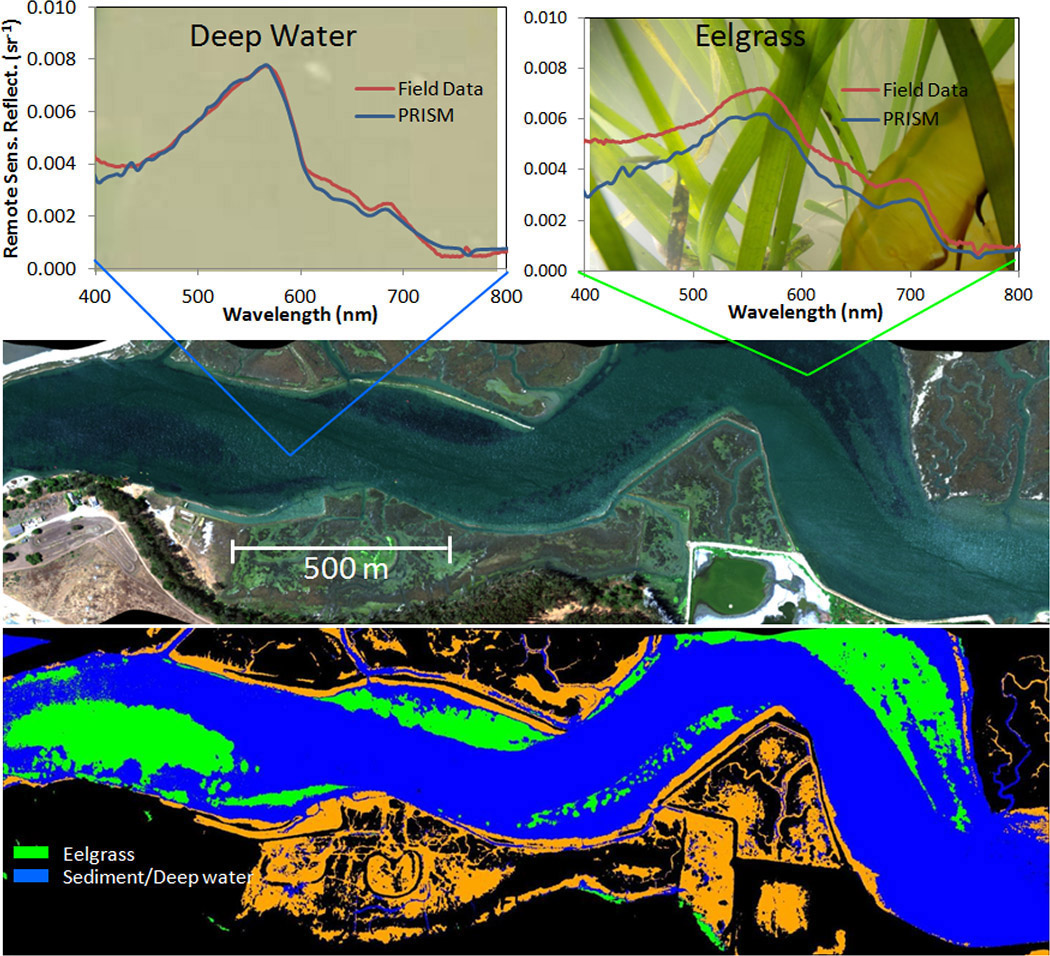 Figure 1. Hyperspectral data for the western portion of the Elkhorn Slough estuary in California, derived from the Portable Remote Imaging Spectrometer (PRISM) and from field measurements. Deep channel water and eelgrass beds are mapped at a spatial resolution of 60cm. (Photographs taken by Eric Heupel and image classification by Brandon Russell at the Coastal Ocean Laboratory for Optics and Remote Sensing.)

Seagrass ecosystems are some of the most productive coastal habitats in the world, and Zostera marina (eelgrass) grows in dense patches up to a few meters' depth in the turbid waters of the slough.6 The spectral fingerprint of water overlying eelgrass meadows is distinct from water in the deeper channel (see Figure 1). The smoother and more rounded shape in the green portion of the spectrum was used to map eelgrass distributions along the slough at 60cm spatial resolution. Both the shallower beds along Seal Bend and the deeper Vierra beds in the western central channel can be detected in our image. High spatial resolution habitat maps provide a tool for monitoring habitat loss over time, as well as attempts to restore valuable coastal wetlands. For example, our baseline maps can help to evaluate the efficacy of the underwater sill built as a barrier to slow the flow of the tide and reduce erosion in Elkhorn Slough.

Hyperspectral imaging, coupled with accurate atmospheric correction techniques, can provide a new tool for environmental managers to comprehensively and quantitatively assess the growth and decline of coastal habitats. We continue to validate the mapped eelgrass distributions by comparing PRISM results with transects measured by divers. We plan to process sequential flight lines to make a comprehensive map of eelgrass, salt marsh, mud flat, and other critical coastal habitats in the Elkhorn Slough region.

The campaign was led by the Coastal Ocean Laboratory for Optics and Remote Sensing at the University of Connecticut in collaboration with NASA JPL, NASA Ames, the Naval Research Laboratory, University of California Santa Cruz, Monterey Bay Aquarium and Research Institute, and Moss Landing Marine Laboratories.

Heidi Dierssen is an associate professor and the head of the Coastal Ocean Laboratory for Optics and Remote Sensing. She received her PhD from the University of California, Santa Barbara, and specializes in ocean optics and remote sensing.