Weapons of mass destruction (WMD) detection systems are typically based on sensing fissile materials (capable of sustaining nuclear fission chain reactions) using gamma rays or neutrons.1–4 Current WMD detection methods, however, have limited distances over which they are effective. Moreover, variable environmental conditions (e.g., humidity and temperature) can affect the detection range and limit it further. In addition, radiation related to gamma rays can be easily shielded by high density and atomic number materials such as lead, thus making these detection systems redundant.5, 6

Alternative methods for remote detection of concealed WMD use hyperspectral imaging (HSI) and wideband (WB) data, which reveal information about the surface and the content of the objects, respectively.7, 8 Radiation in the visible-near-IR and in the short-, mid-, and long-wavelength IR ranges are all used in this HSI data. The analysis of WB data focuses on the difference in the rate at which electromagnetic waves penetrate different materials. High-frequency waves are absorbed more easily than low-frequency waves, which facilitates object recognition.

The stages of our proposed WMD detection method, using HSI and WB data, are illustrated in Figure 1. We first process HSI data to estimate the presence of WMD and subsequently confirm the possible detection using WB data.8 We have also performed simulations of the detection process to better understand the procedure of WMD detection based on HSI imaging and WB technology, and the impacts of environmental conditions on WMD detection.

In our simulations, the target objects are modeled as having different layers with variable thicknesses and compositions. The different materials can be detected by altering the center frequency and power of the WB signal. In an example simulation scenario, a WMD encased in steel is inside a wooden box in the back of a truck and the target is 1km from the detection system. We performed the simulations under the same environmental conditions (e.g., fixed temperature) and assumed that the target material was unknown.

First, we processed the HSI data to estimate the presence of the truck and the box in which the example WMD is contained. The wooden box is detected in the 0.7–1.34μm wavelength range. We then attempted to identify the steel target using the WB signal, with a period of 100ms, by varying the center frequency from 1MHz to 1GHz. 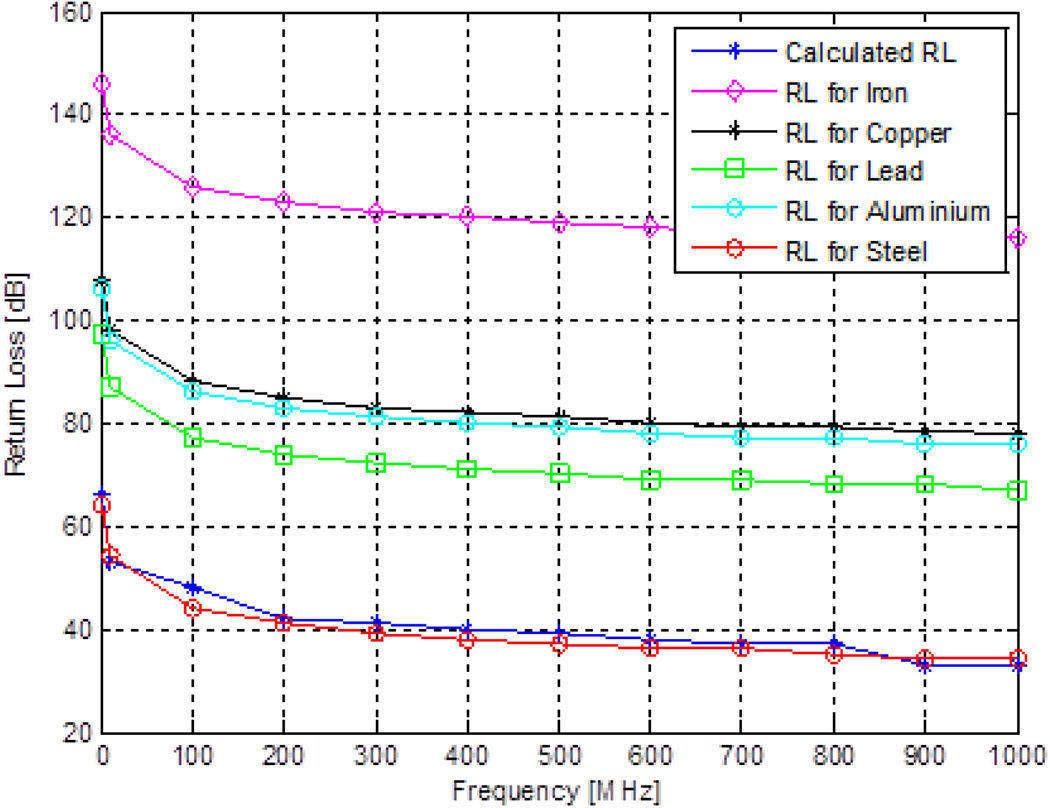 Figure 2. Calculated return loss (RL) and values from a WB library for different materials. The calculated return for this simulation is a close match to the signal expected from a steel target.

Concealed WMD are very difficult to detect remotely using current systems. Our proposed method, however, can be used to estimate the presence of WMD as the shields can be detected. We are continuing to perform simulation experiments, refine our methodology, and develop our parameter libraries. We are planning to build a specific prototype system in upcoming years.

Ershad Sharifahmadian obtained his MSc in biomedical engineering in 2009, and is expected to receive his PhD in electrical engineering in 2014. He has been awarded several research and travel grants from the Defense Threat Reduction Agency and the National Science Foundation. He has also received certificates of merit from the IEEE's Engineering in Medicine and Biology Society, and the International Conference on Biomedical Engineering.

Yoonsuk Choi is a PhD candidate in the Department of Electrical and Computer Engineering. He worked many years as a research engineer at the Korea Institute of Science and Technology, LIG Nex1 (Missile R&D), and the Institute of Quantum Information Processing and Systems at the University of Seoul. His research interests include, image fusion methods, hyperspectral and multispectral imaging analysis, and multidimensional signal processing.

Shahram Latifi received his MSc in electrical engineering in 1980 and his PhD in 1989. He is currently a professor of electrical engineering, an IEEE fellow, and the director of the Center for Information and Communications Technology. He is the author of over 200 technical articles in the areas of image processing, biosurveillance, biometrics, document analysis, computer networks, fault-tolerant computing, parallel processing, and data compression.