STORM: a sounding and tracking observatory for regional meteorology

Globally, 6.6% of the population (∼470 million people) live at elevations of less than 5m. To put this into perspective, Hurricane Sandy's storm surge was over 2.5m, with maximum wave heights of 9.7m. There is mounting concern that Asia's low-lying, high-density cities—including Bangkok, Jakarta, and Ho Chi Minh City—would suffer serious damage if hit by a severe storm. The World Bank, for example, has begun to commit billions of dollars to projects such as flood prevention and water management to help major Asian cities avoid the expected impact of climate change. As noted in a recent article in the Washington Post, this move provides a “dramatic example of how short the horizon has become to alleviate the effects of global warming.”1 Reducing uncertainty in storm track forecasting could play an important role in helping to alleviate the threat of intense weather, as well as mitigate the large economic losses associated with severe storms. This article discusses a new sensor designed to significantly increase the accuracy of severe storm forecasts.

In May 2002, NASA introduced hyperspectral IR sounding technology with the launch of the Advanced Infrared Sounder2 (AIRS). AIRS significantly increased the accuracy of forecasts, and it was considered a ground-breaking demonstration of technology. This was followed by the Infrared Atmospheric Sounding Interferometer on the Metop-A satellite, which is operated by the European Organisation for the Exploitation of Meteorological Satellites3 (EUMETSAT), and the Cross-track Infrared Sounder4 on the Suomi National Polar-Orbiting Partnership satellite (operated by NASA). Although these sensors now provide global coverage of temperature and moisture profiles several times a day, they are low Earth orbiting (LEO), which means they cannot perform real-time tracking of severe, regional-scale weather systems. National weather agencies use one or more geostationary (GEO) satellites for this, but none of them currently provide the hyperspectral sounding capability and performance of the LEO constellation. 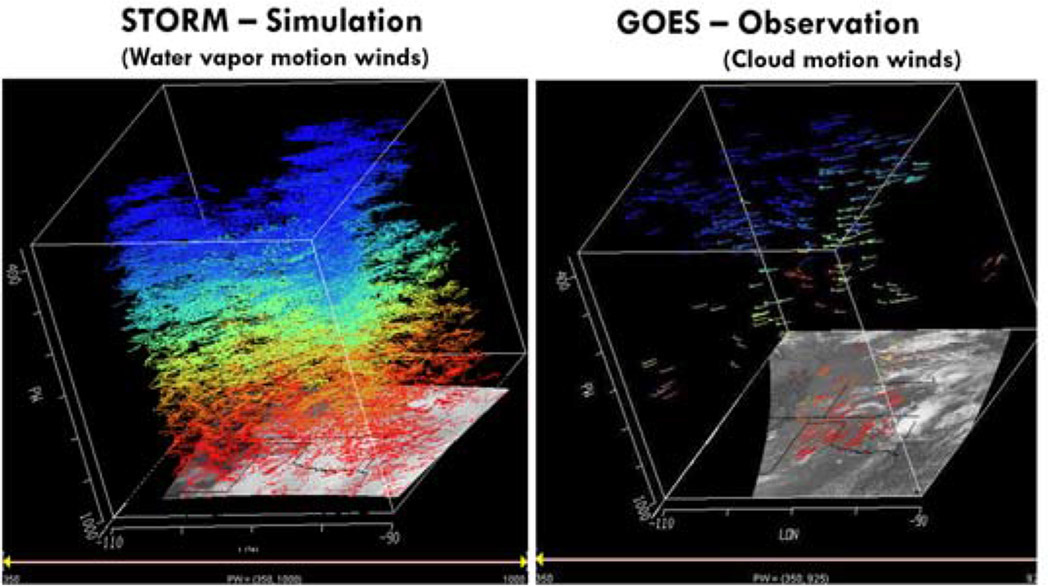 Figure 1. Left: A simulation of the improved wind-vector field around a developing weather feature that an ultra-spectral sounder could deliver (as anticipated from STORM), compared with (right) the cloud-motion winds currently available from an imaging sensor (as delivered by GOES). STORM: Sounding and Tracking Observatory for Regional Meteorology. GOES: Geostationary Operational Environmental Satellite.

Over the past decade there have been several attempts to develop and launch ultra-spectral sounders to GEO orbit. Although two significant attempts have occurred in the United States, both were terminated for cost reasons. First, the New Millennium Earth Observing 3 Program at NASA selected the Geostationary Imaging Fourier Transfer Spectrometer5 (GIFTS) in 1998 to develop new technologies that would provide AIRS-quality data with rapid revisit times.6 In 2004, however, the GIFTS program lost a critical sponsor, and its flight portion was canceled. After successful vacuum calibration and ground testing,7 the GIFTS hardware was stored for future use. Second, the US National Oceanic and Atmospheric Administration partnered with NASA to attempt the inclusion of a similar sensor, the Hyperspectral Environmental Suite8 (HES), as part of their Geostationary Operational Environmental Satellite-R Series. This was never realized, since HES was canceled due to high system costs.9, 10

Planned for launch in 2018, the first fully operational ultra-spectral GEO sounder will be EUMETSAT's Meteosat Third Generation InfraRed Sounder (IRS). Although the GIFTS program was discontinued, it laid the foundation for both HES and IRS. Moreover, in doing so, it demonstrated the technology required for a massively parallel and fast-response design that would meet the needs of a regional, severe-weather development monitor.

The delay caused by the exceptional cost of government-sponsored weather satellite programs motivated GeoMetWatch11 (GMW) to acquire a commercial remote-sensing license from the US Department of Commerce. The license is for operating a constellation of six commercially funded GEO hyperspectral imaging/sounding sensors that will circle the earth. The GMW Sounding and Tracking Observatory for Regional Meteorology (STORM™) will initially, to the degree feasible, be an updated build-to-print copy of GIFTS. The unique data stream acquired from STORM will be commercially available to interested governments and companies, as raw data or processed into products. Under the leadership of the same team that developed and tested GIFTS, Utah State University's Advanced Weather Systems Foundation (AWS) will build the STORM sensors for GMW. STORM-1 will launch in 201612 as a commercial payload on board the AsiaSat-9 telecom satellite13 with a position of 122 degrees east.

STORM-1 will use two 128 × 128 IR focal planes. Each focal plane will image a 4km-square footprint and provide 16,384 soundings of a 512km-square area every 11 seconds, resulting in over 100 million high-vertical-resolution soundings per day. Spectra from STORM's interferograms will have over 1800 channels, allowing approximately 1km of vertically resolved temperature profiles and 2km of water vapor profiles. Since the spectra measured from GEO are the same as those measured by existing LEO sensors, harvesting the temperature and water vapor profiles will require little software development. Likewise, since uncondensed water vapor fields have significant structure, the software used to calculate cloud motion winds is also appropriate for developing water vapor wind profiles for each sounding layer (see Figure 1). This is important because detailed wind information can significantly improve forecasts and offer valuable information for aircraft routing.

It is anticipated that STORM hyperspectral data will enable meteorologists to provide better daily forecasts, improve predictions of severe weather and atmospheric instability, and reduce the uncertainty associated with storm track forecasts for the most heavily populated regions around the world.

Gail Bingham, emeritus research professor of Utah State University and chief scientist for the Space Dynamics Laboratory has a PhD from Cornell University and holds the Utah Governor's Medal for Science and Technology. He was the principal investigator on several successful space and environmental instruments and the instrument co-investigator on GIFTS.