High-performance microbatteries are an intensely sought after power source for autonomous miniature portable electronic devices and systems, such as smart cards, microsensors, and microactuators.1 Using a transportation analogy, the energy density of a battery corresponds to the range, and the power density corresponds to the vehicle's acceleration. Currently available commercial microbatteries are based on planar architectures. Since the energy density of the battery depends on its total amount of active material, electrodes in 2D batteries require a large footprint in order to achieve usable values. Making the electrodes very thick significantly decreases the power density since the diffusion distances for both electrons and ions inside the electrode increase. Using 3D architectures would allow increased active material loading without increasing the thickness of the active material or footprint of the electrode. The size of such 3D elements in a typical fabrication process is still within the tens of microns range, which is a long distance for lithium ion diffusion. This limits power density. Using nanostructured materials with sub-micron dimensions in 3D electrode architectures would significantly improve power density due to the shorter diffusion distances and higher electrode/electrolyte contact area.2 However, integration of nanomaterials into microbatteries as well as compatibility with microfabrication processes remains a challenge.

Tobacco mosaic virus (TMV) is a common plant virus that is harmless to people. It has a cylindrical shape with a length of 300nm and diameter of 18nm. TMV has a well-known structure, and it is possible to create novel virus structures using genetic modification approaches. These modifications include chemical changes to the outer surface of the virus. For example, cysteine residues can be introduced into the TMV coat protein.3 Cysteine is an amino acid with a thiol group that shows enhanced metal binding through strong covalent-like interactions. This makes it possible to directionally attach rod-shaped TMV molecules to gold-coated surfaces through sulfur-gold bonds, and then coat the TMV surface with metals to create high-aspect-ratio metalized nanowires. This approach allows TMV to be used as a template for nanostructured materials synthesis and integration into microfabrication processes.4, 5

We explored the possibilities of TMV as a biological template to fabricate 3D hierarchical electrodes for lithium-ion microbatteries, using both micromachining technology and nanostructuring.6–8 The process for electrode fabrication on planar substrates is schematically illustrated in Figure 1. Cysteine-modified TMVs self-assemble on gold-coated surfaces. After TMV self-assembly, its surface is activated with a palladium catalyst to facilitate the subsequent nickel electroless plating reaction. The resulting rigid metalized ‘nanoforests’ produce almost an order of magnitude increase in surface area compared to planar surfaces. The nickel plating process can be combined with conformal thin-film deposition techniques such as atomic layer deposition to create core-shell structures where the nickel core serves as a current collector, and the shell materials serve as a matrix for lithium intercalation.6–8 Unlike previously reported methodologies that have used biological templates for the synthesis of nanomaterials and relied on powder mixing and ink casting for electrode fabrication, this approach involves direct fabrication of the nanostructured lithium-ion battery electrodes. 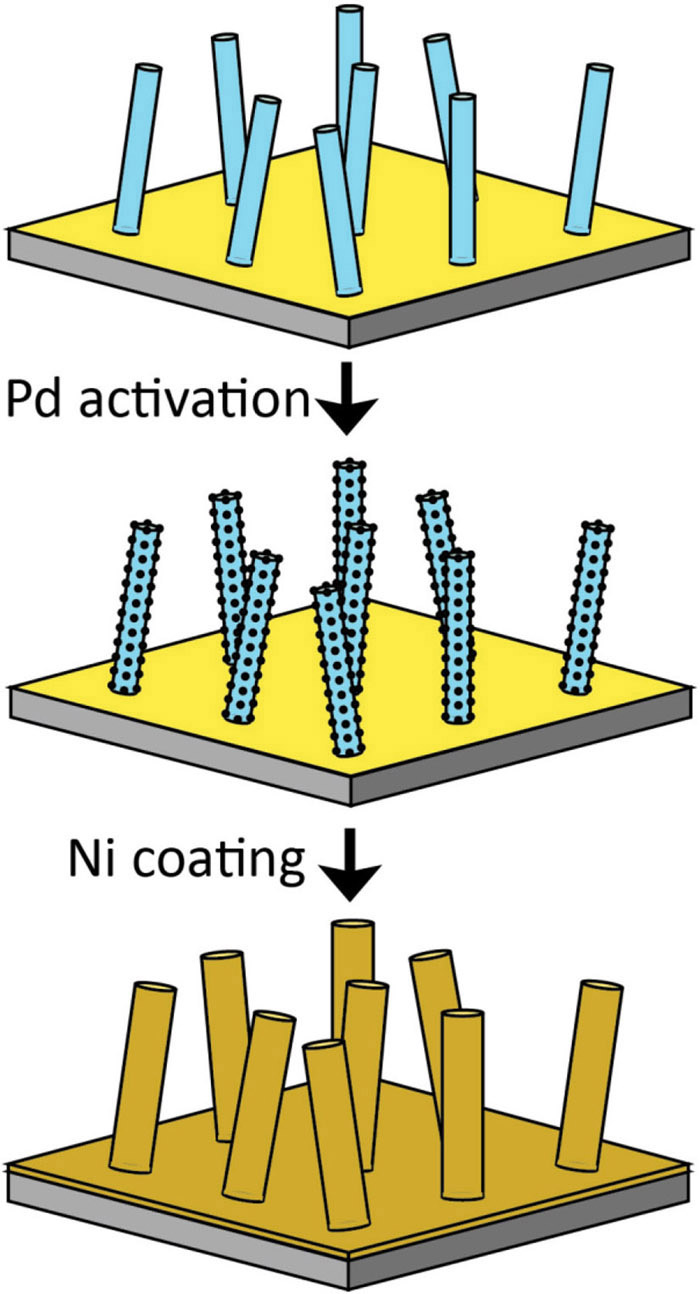 One of the advantages of the TMV-based technology is that it is compatible with standard micromachining processes, including 3D microfabrication techniques and photolithographic patterning.4 We fabricated hierarchical electrodes by electroplating solid or hollow gold pillars in a photoresist mold.8 After photoresist removal, the micropillars were coated with the metalized TMV template, followed by deposition of a 30nm-thick vanadium pentoxide (V2O5) layer using ALD (see Figure 2). The morphology of the electrodes is shown in Figure 3. 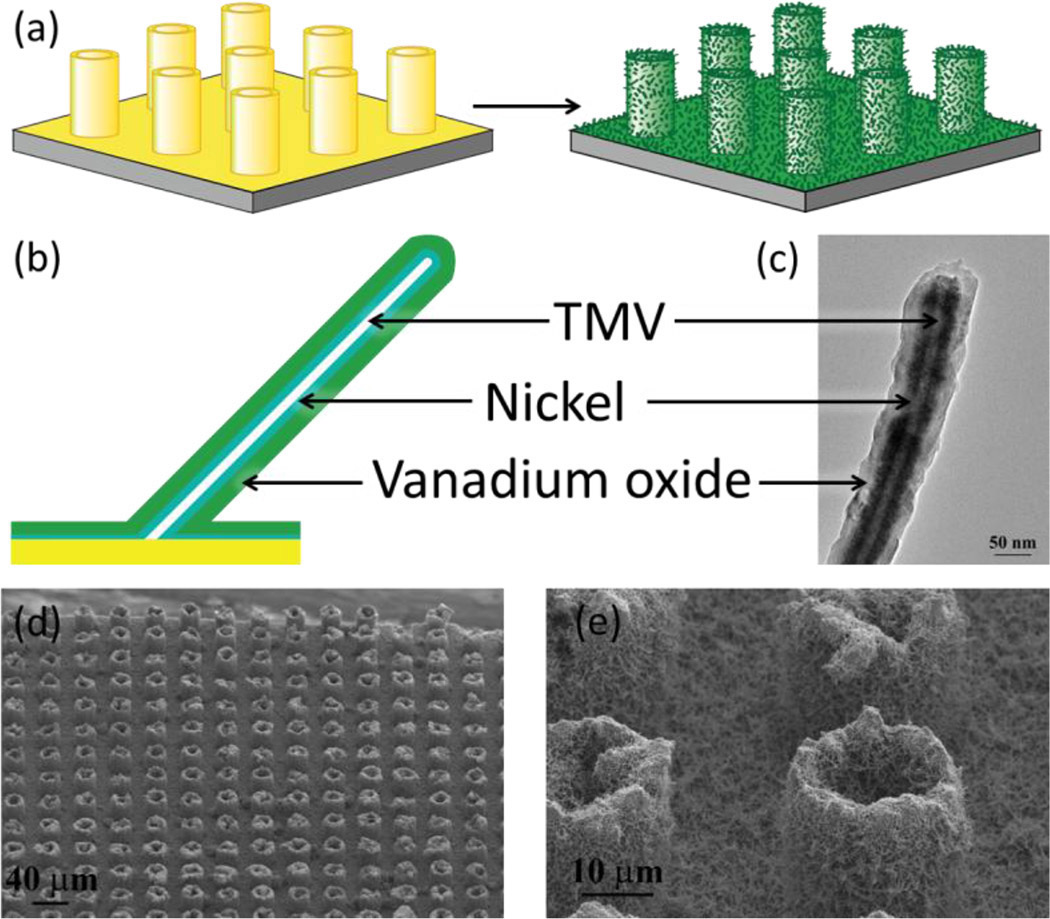 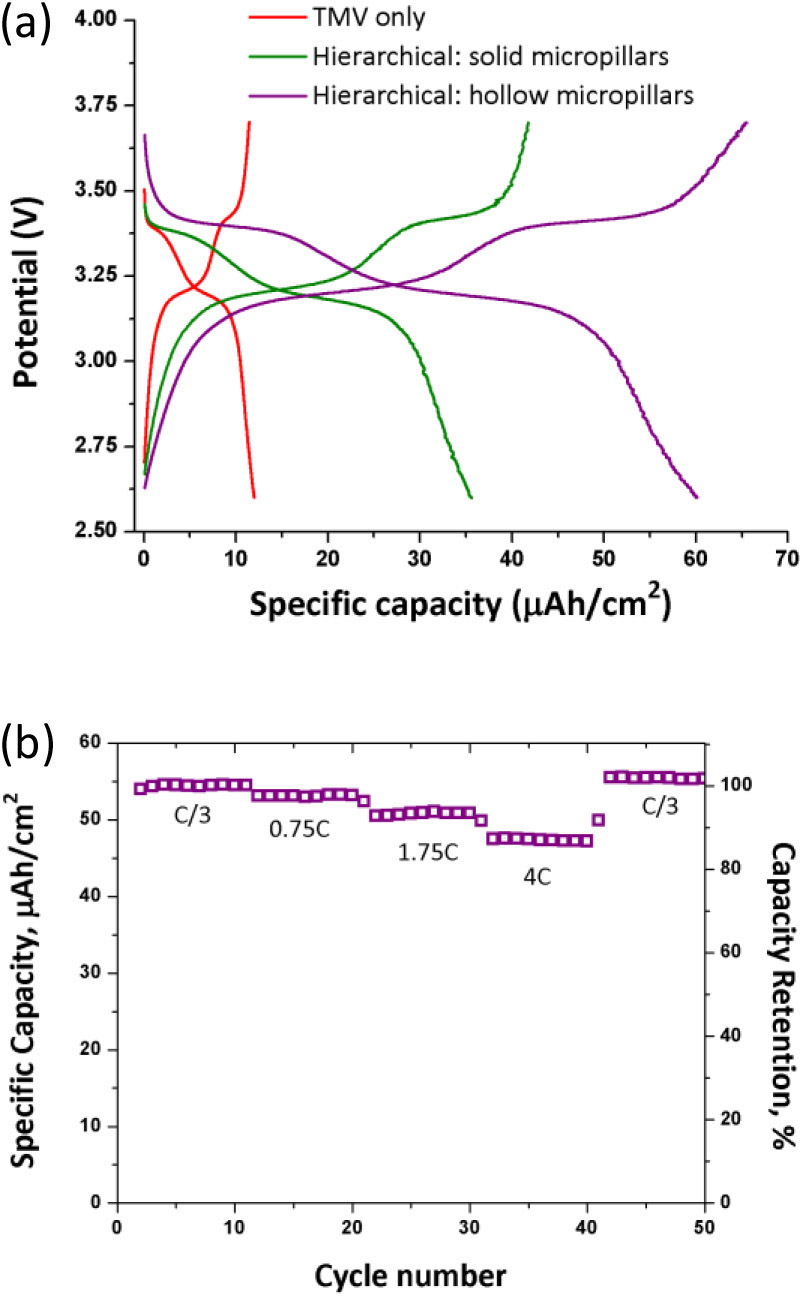 Galvanostatic discharge/charge curves indicate that the capacity of hierarchical electrodes is 36 and 60μAh/cm2 for the electrodes based on solid and hollow pillars, respectively: see Figure 3(a). Since the limiting factor in microbattery development is the available area, we normalized the capacity in this work over the footprint of the electrode. The TMV-templated electrodes without micropillars delivered a capacity of 12μAh/cm2: see Figure 3(a). Therefore, increasing the surface area with both micro- and nanostructured elements enables a three to five times increase in capacity compared to the electrodes with nanostructures only.

We also ran rate capability experiments, which indicate how fast lithium ions can be transferred, for electrodes based on hollow pillars. These showed that about 87% of capacity remains when the charge rate is increased from C/3 to 4C: see Figure 3(b). This result confirms that 3D hierarchical electrodes demonstrate high power density due to the nanostructuring enabled by TMV templates. And it indicates that the energy density is increased for the hierarchical electrodes without reducing the rate performance, characteristics that are highly desirable for next-generation high-performance microbatteries.

In summary, the use of TMV nanotemplates enables the fabrication of hierarchical electrodes with a large, 3D surface area for lithium-ion microbatteries with advanced electrochemical behavior. Our method enables a significant increase in energy density without increasing the electrode footprint or compromising power density, properties that are highly desirable for microbattery development. Our future research focuses on the integration of TMV with higher-aspect-ratio 3D elements made of cheaper materials, like silicon micropillars, and on combining the hierarchical electrodes with a solid-state polymer electrolyte.