Understanding the formation and evolution of Mercury, the innermost terrestrial planet, is important for studying the early stages of our solar system. Until recently, the surface composition of Mercury was largely unknown. Measurements made by the geochemical instruments on NASA's MErcury Surface, Space ENvironment, GEochemistry, and Ranging (MESSENGER) spacecraft suggest that the planet's surface is dominated by magnesium-rich (and iron-poor) orthopyroxene and feldspar minerals.1 Designing a thermal IR instrument to withstand the harsh thermal environment of Mercury's orbit is challenging. Although the MESSENGER spacecraft carries instruments for optical spectroscopy, they operate only in the visible to near-IR spectral range. The 1.45μm spectral cutoff of the Mercury Atmospheric and Surface Composition Spectrometer (MASCS) on MESSENGER2 was chosen to minimize instrument heat load while maximizing its scientific yield.

None of the spectral data obtained from MASCS so far contains diagnostic absorption bands that can be used to identify surface mineralogy. Furthermore, laboratory experiments (see Figure 1) on analog samples for Mercury's surface have been performed at the Planetary Emissivity Laboratory (PEL). The results show that for samples that have been heated to temperatures above 300°C—typical for the dayside of Mercury—the spectral contrast in the visible and near-IR regions is reduced, compared with spectra obtained from samples that have remained at room temperature.3 The main spectral effect is a shift of absorption band centers with changing temperature.4 Thermal IR measurements of the same analog samples are affected to a lesser degree by the heating.

Figure 1. Reflectance spectra of calcium sulfide samples (a likely constituent of Mercury's surface) before (blue) and after (red) exposure to Mercury peak daytime temperature (700K) at the Planetary Emissivity Laboratory, in (a) the visible wavelength range and (b) the thermal IR range covered by the MErcury Radiometer and Thermal infrared Imaging Spectrometer (MERTIS).

We have designed the MErcury Radiometer and Thermal infrared Imaging Spectrometer (MERTIS) as part of the payload for the Mercury Planetary Orbiter spacecraft of the joint European Space Agency and Japan Aerospace Exploration Agency BepiColombo mission to Mercury.5–7 With MERTIS we aim to study various aspects of Mercury's surface, e.g., identify rock-forming minerals, map surface composition with a spatial resolution of 500m, and investigate temperature variations.

Our design for MERTIS combines a push-broom IR grating spectrometer (TIS) with a radiometer (TIR) that share the same optics, instrument electronics, and in-flight calibration components. TIS and TIR operate over wavelength ranges of 7–14 and 7–40μm, respectively. MERTIS (see Figure 2) is modular, with the electronic units and power/calibration systems having a mass of less than 3kg, and nominal power consumption of less than 12W. Our design uses an uncooled microbolometer, the first space-qualified microbolometer to be developed and built in Europe. This microbolometer is based on commercial detectors and has 160×120 pixels, each 35μm in size. 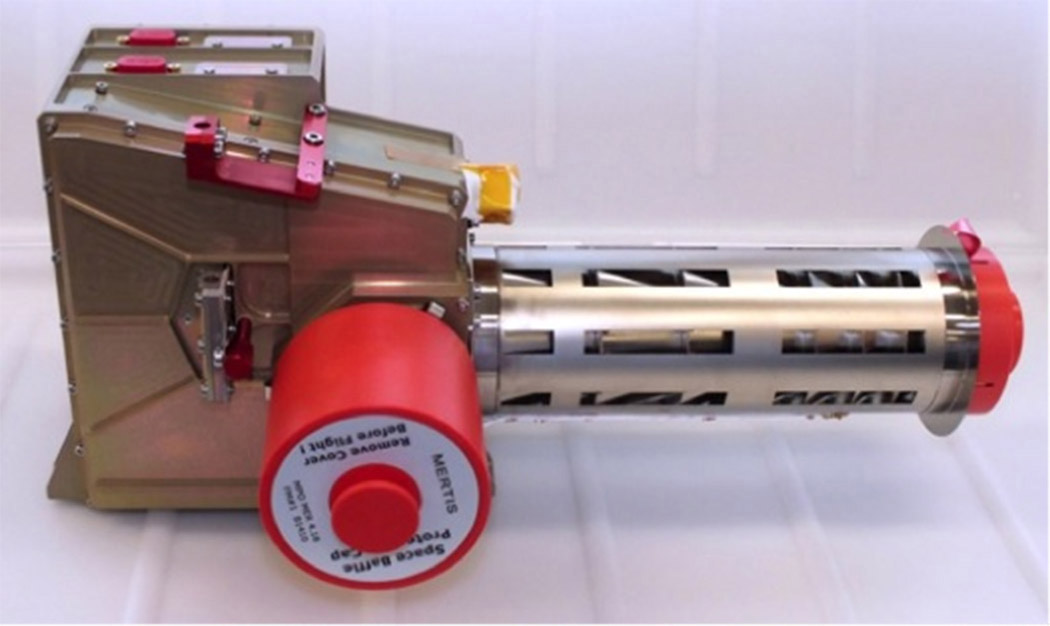 The sensitivity of our detector is greater than the commercial version, and its wavelength cut-off has been decreased from 8 to 7μm. The resulting detectivity of our instrument ranges from 10–15pW. We implement the TIR and TIS components of the the instrument by using an in-plane separation arrangement. TIR uses a thermopile line detector array with a detectivity of 7×108cm Hz1/2 W−1.7, 8

Our scientific goals for MERTIS drive the instrument specifications. Small contrasts in the diagnostic spectral features of Mercury's soil and high temperature contrasts (70K at night, 700K during the day) mean that large dynamic ranges in the spectral, radiometric, and spatial resolutions are required. We have verified the performance of the integrated MERTIS instrument in the PEL of the German Aerospace Center (DLR). At this unique facility, rock samples can be heated to temperatures that match Mercury's daytime peak, under vacuum conditions in a planetary simulation chamber. Measurements obtained over a wide range of temperatures have confirmed that MERTIS will be capable of identifying a wide range of mineralogies on the surface of Mercury.

MERTIS will provide new insights into the formation and evolution of the planet Mercury, and will extend the range of optical spectroscopy measurements that have been conducted from the NASA MESSENGER mission into the thermal IR region. In the future, the MERTIS design and concept can be adapted to suit a wide range of space missions. Its low mass and power consumption, together with its high sensitivity, make it particularly relevant for future missions to the Moon and asteroids.

Joern Helbert has been the deputy group leader of the Experimental Planetary Physics group since 2010, and co-principal investigator for the MERTIS instrument on the BepiColombo mission since 2007. He was the recipient of the 2011 Otto Lilienthal research award.