Current solar cell technologies are dominated by silicon. Limited primarily by silicon's inherent properties, these solar cells convert only 15–20% of solar energy into electricity. Solar cells made from III-V compound semiconductors (materials that contain group III and group V elements) have much higher efficiencies, due to their better optical (absorption) and electrical (charge mobility) properties. Furthermore, with different III-V materials on the same device, researchers can produce multiple junctions or heterostructures to cover a broader range of the solar spectrum. In these devices, researchers have demonstrated efficiencies of over 40% under concentrated solar energy.1

The additional benefits afforded by nanotechnology may further enhance solar cell performance. Nanowire research has emerged as a quickly growing field. Much excitement stems from the unique electronic and optical properties of semiconductor nanowires. Nanowires of a particular substance may behave quite unlike much larger ‘bulk’ samples of the same material. Nanowires are of great interest in photovoltaics because of their large surface area, high aspect ratio (long and thin), intrinsic antireflection effect (which increases light absorption), and ability to direct light absorption with specifically designed arrays.2 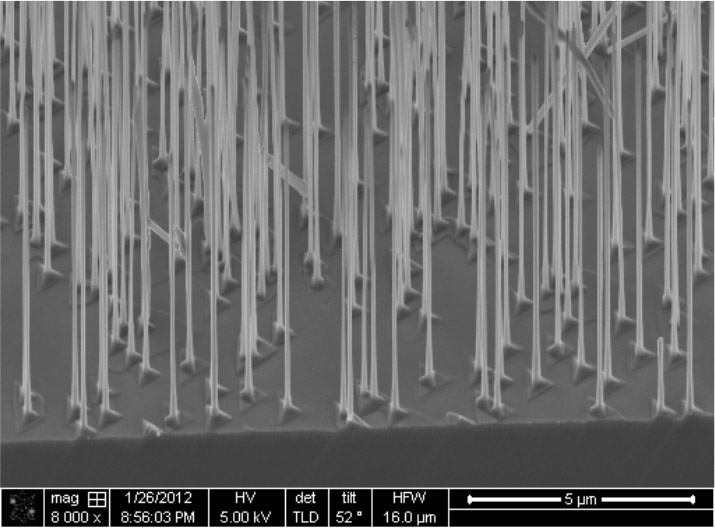 We measured good power conversion efficiency of 3.56% in these initial nanowire devices. With further optimization of nanowire geometry, growth, and processing procedures, we expect that the efficiency will improve significantly. We also found that we could peel off some of the underlying wafer, leaving a ribbon of nanowires securely embedded in the polymer layer: see Figure 2(b). This technique holds great promise for creating flexible and lightweight nanowire solar cells. Reduced material usage and substrate re-use should also help to lower costs. Such solar cells could be integrated into, rather than installed on, surfaces such as clothes and fabrics. 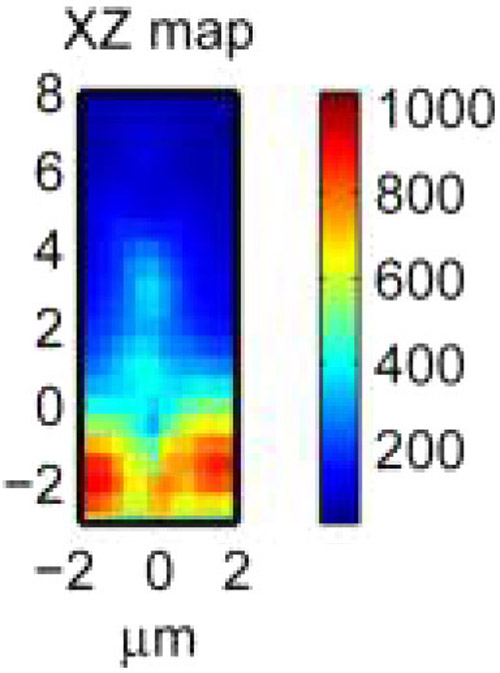 Figure 3. Photocurrent map along the growth direction of a single GaAs/AlGaAs nanowire, using the TOBIC (two-photon induced current) technique. Photocurrent generated from both a nanowire and the substrate below it can be clearly identified for in-depth study of carrier generation and collection.

To understand what is happening within the nanowire solar cells, we developed a novel technique based on two-photon induced current. The technique provides a 3D map of the photocurrent from each nanowire at submicrometer resolution.5Using ‘below bandgap’ (two-photon) laser excitation, carriers can be generated specifically at the focal voxel and not above or below this point within the focus cone (as would occur for above-gap excitation). Figure 3 shows photocurrent mapping along the growth direction of a single nanowire from our solar cell, revealing efficiency hotspots, carrier collection pathways, and recombination mechanisms with high spatial resolution. This technique opens up enormous opportunity to explore various nanowire solar cell designs and further exploit the unique properties of 1D nanostructures in high-efficiency photovoltaic devices. Nanowire solar cells show great promise for next-generation photovoltaics. However, addressing the many new material and device challenges that arise from these unconventional nanostructures will require more mature simulation, manufacturing, and characterization tools. Researchers must focus their attention on these goals to achieve high-performance devices that will find application in daily life.