Active remote detection of radioactivity based on electromagnetic signatures

Sources of naturally occurring radioactivity range from rocks to bananas. Man-made radioactivity can be found in nuclear power plants and nuclear weapons. Moderate doses of radioactivity can be useful, for instance, in medicine and technology. At high doses, however, radioactivity is dangerous to biological entities, and it is important to have a robust means for its detection. A prominent example of this is the wrecked Fukushima Daiichi power plant in Japan. Another example is illicit transportation of radioactive materials. Other applications of methods for detecting radioactive materials include security and verification of compliance with arms control treaties. The most common type of radioactivity detector is the so-called Geiger-Müller tube: the sensing element of the familiar Geiger counter, which emits a click on detecting a particle of ionizing radiation. Useful as they are, existing techniques are passive, which results in limited sensitivity. They also have a very limited range (less than a few meters). Yet detection at extended range is critical, for example, in the case of illicit activities.

We previously proposed a radioactivity detection concept based on a high-power terahertz (THz) pulse that induces avalanche (collisional) breakdown and spark formation in the vicinity of the radioactive material.1,2 We have since observed that laser sources have the potential for longer standoff detection distances compared with THz sources. Here, we propose an alternative concept using laser radiation and a probe beam (e.g., millimeter beam) to detect electromagnetic signatures in the vicinity of radioactive material (see Figure 1). Studies we and others carried out between 2002 and 2008 analyzed3 and experimentally characterized4–6 propagation of short laser pulses in the atmosphere. These studies indicate the feasibility of propagating laser beams in the atmosphere as probes for the purpose of detection.

The rate of change of electron density is given by ∂Ne/∂t=(1+αrad)Qrad+Se−Le, where αrad is the radiation enhancement factor (a measure of the amount of radioactive material) and Qrad=20 disintegrations/cm3 is the ambient (background) radiation level, Se represents the various electron source terms, and Le is the electron loss terms.7–9 In the absence of radioactive material, αrad=0. Figure 2 shows the radiation enhancement factor αrad as a function of distance from the radioactive source, for 1 and 10mg of 60Co (cobalt-60). 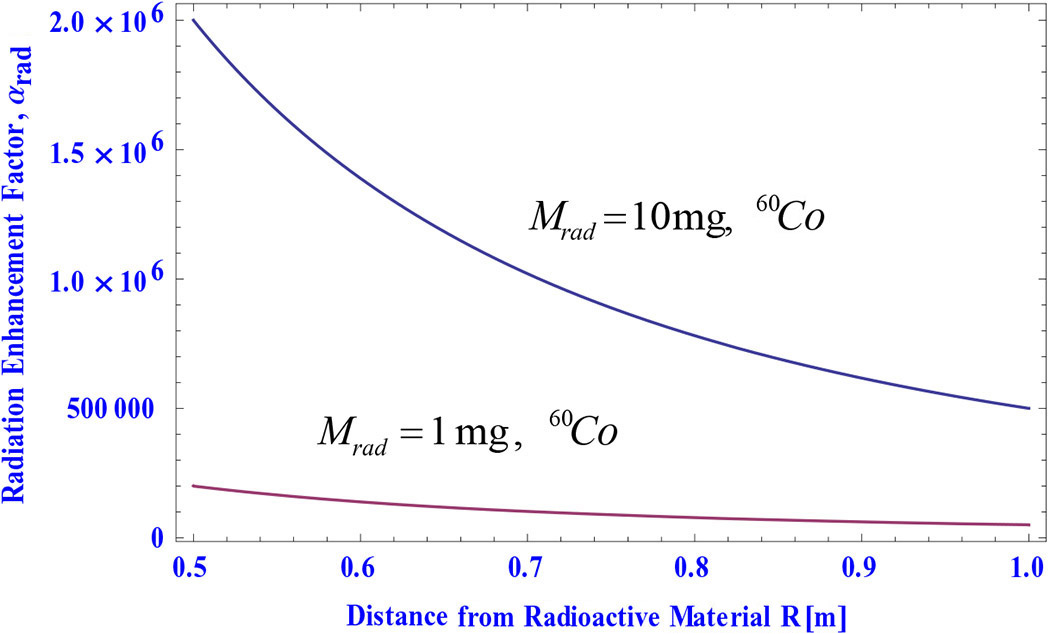 A probe beam of frequency ωo propagating in a time-varying electron density will undergo a frequency change that is given by Δω(z, t)=(2ωo)−1 [ωp2(t)−ωp2(t−z/c)], where ωp(z, t)=[4πq2Ne(z, t)/m]1/2 is the plasma frequency, q is the elementary electric charge, and m is the electron mass.

As an example of this method of detection, we consider the case where the ionizing laser has a peak intensity of 160GW/cm2 and pulse duration of 1ns. The probe beam is a millimeter wave source of frequency 94GHz. In the absence of radioactive material there is no frequency modulation of the probe. For αrad=103 and a probe-beam interaction distance of 10cm, the fractional frequency modulation is significant, ∼5%, which is readily detectable (see Figure 3). In other words, the frequency shift is the sought-for electromagnetic signature of radioactive material and can be measured. 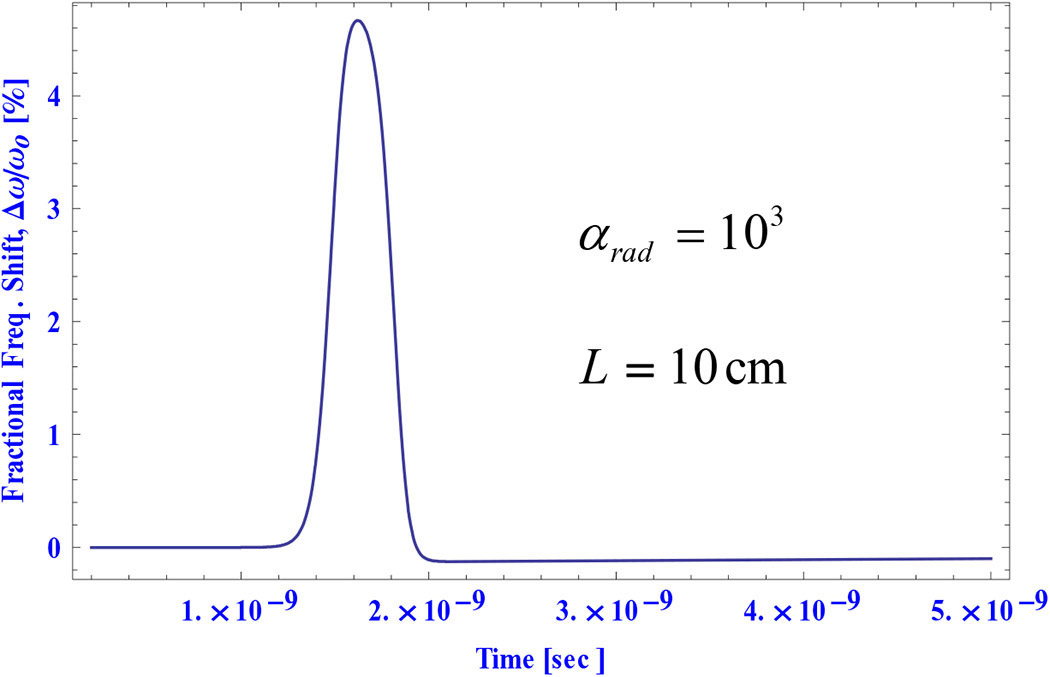 The authors acknowledge useful discussions with Victor Granatstein, Carlos Romero-Talamas, Richard Fernsler, and Steven Slinker. This work was supported by Naval Research Laboratory 6.1 base funds and by the Office of Naval Research.

Phillip Sprangle is professor of engineering and physics at the the University of Maryland and senior scientist for directed energy physics at NRL. He is a fellow of the American Physical Society, OSA, IEEE, and the Directed Energy Professional Society.

Phillip Sprangle is professor of engineering and physics at the the University of Maryland and senior scientist for directed energy physics at NRL. He is a fellow of the American Physical Society, OSA, IEEE, and the Directed Energy Professional Society.