Aqueye Plus: a fast photometer with an optical vortex coronagraph

In 2005, when the European Southern Observatory (ESO) was developing the idea of a 100m optical telescope (named OverWhelmingly Large Telescope, OWL), we suggested an unconventional use for the enormous number of photons in the focal plane of the instrument.1 Given the instrument's huge aperture, it would be possible not only to study fainter objects with higher spectral resolution but for the first time to study second-order statistical functions in the photon stream from celestial sources. In other words, the realm of quantum astronomy could be accessible through the suitable design of a photon collector. One approach was to resurrect the intensity interferometer first proposed by Hanbury Brown and Twiss and implemented at Narrabri (Australia) in the 1960s, but with orders of magnitude greater sensitivity. However, two very difficult conditions had to be met. The detector had to be able to determine the arrival time of each photon with a few picoseconds' precision, and it would have to cope with gigahertz rates of arrival of photons having well-defined energy and polarization states. The latter condition explains why only very large, next-generation telescopes offer any hope of crossing the boundary from classical to quantum astronomy.

In our study, we showed that current technology, albeit pushed to its limits, could provide the solution. Consequently, we proposed a focal plane instrument called QuantEYE intended as the fastest-ever photon-counting astronomical photometer, with an array of 100 parallel channels. ESO later reduced the diameter of OWL—now called the European Extremely Large Telescope, currently in planning—to 39m, but many of our original design ideas remain valid. To demonstrate the feasibility of the concept, we realized a couple of prototype instruments for smaller telescopes, namely, Aqueye for the 1.8m-diameter Copernicus telescope at the Asiago Cima Ekar (Italy) observatory2 and Iqueye for the 3.6m-diameter New Technology Telescope at ESO's La Silla (Chile) Observatory.3 These two instruments are based on the same functional concept as QuantEYE, that is, dividing the entrance pupil into smaller sections and focusing the light collected by each of them on a single photon avalanche photodiode (SPAD). The results obtained confirmed the soundness of the instrumental approach, although the relatively small size of the telescopes prevented actual quantum astronomical observations. Nonetheless, these instruments enabled high-quality visible light observations of accessible pulsars,4, 5 providing light curves with the best time resolution and signal-to-noise ratio to date, as well as the most accurate measurements of the pulsar periods.

In working on QuantEYE, we also considered what new types of astronomical information could be carried by the photon orbital angular momentum (POAM), a degree of freedom of the electromagnetic field with both classical and quantum implications. In particular, we showed6, 7 that the optical vorticity (OV) associated with POAM could be used to image a faint secondary companion very close to a bright primary star, e.g., an orbiting planet. This technique goes by the generic name of coronagraphy, and was first developed around 1930 by the French astronomer Bernard Lyot to study the solar corona. In our application, OV is imparted to the light beam through a transparent plate made by electron-beam lithography. The plate is shaped like a staircase, with a spiral descending from a very sharp tip, which imparts a phase discontinuity to the light beam of the on-axis star. In this way, the phase is undefined along the optical axis, and most of the light of the primary is thrown in a ring (sometimes vividly called a ‘ring of fire’) that is blocked by a suitable stop in the plane of the Fourier transform (the Fourier stop). Owing to fabrication constraints, the spiral is not continuous, but realized by 512 discrete steps from the tip to the bottom. The exploitation of OV for coronagraphic applications could be greatly facilitated on space telescopes, thanks to the absence of atmospheric perturbations of the wavefront. In contrast, ground telescopes require (insofar as possible) the removal of these image degradations through a series of techniques generally referred to as adaptive optics (AdOpt).

Here, we describe an improved version of Aqueye, called Aqueye Plus, where an OV-based coronagraphic facility and adaptive optics module have been added to the original photon-counting photometer. This new instrument takes advantage of the adaptive mirrors developed by a local company (Adaptica, Padua, Italy) for astronomical and industrial applications. The innovative concept behind the Aqueye Plus design is that it uses SPADs as quadrant detectors to correct for defocus, tip and tilt, and low-order aberrations of the stellar image on the OV coronagraphy phase mask discontinuity. Figure 1 shows the optomechanical design of the new instrument. 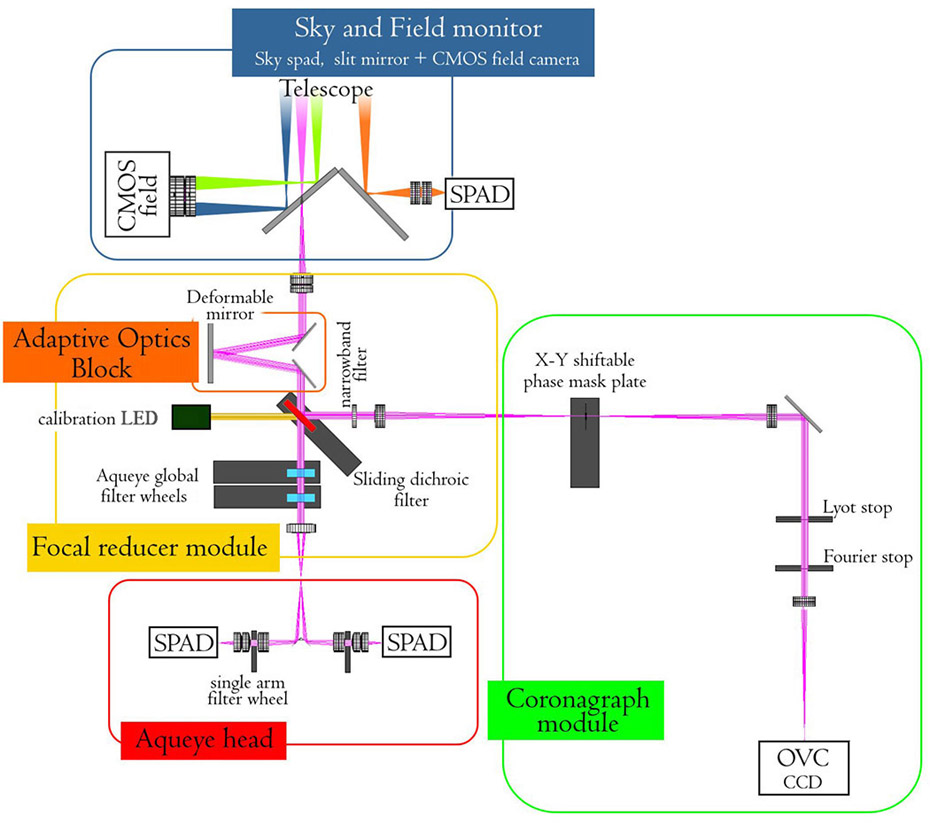 Figure 1. The optomechanical design of Aqueye Plus. The parallel beam leaving the collimator of the focal reducer can either go directly into the Aqueye photometric unit or be intercepted by a removable adaptive optics module and dichroic element for coronagraphic applications. A fifth SPAD (single-photon avalanche photodiode) on the telescope focal plane monitors the sky. OVC: Optical vortex coronagraphy.

At the output of the telescope, the light from the star encounters a dedicated acquisition and guiding unit, and a focal reducer. At the exit of the focal reducer, the light can go directly to the beam-splitting pyramid that feeds the four SPADs for very high speed photometry. Alternatively, a coronagraphic mode for detecting a faint companion next to a primary star can be implemented by inserting a removable dichroic element. Part of the light is then directed to the coronagraphic module, whose main element is a spiral phase plate with topological charge ℓ=2 (i.e., the number of twists imparted by the mask to the wavefront in one wavelength), and whose conceptual design is shown in Figure 2. 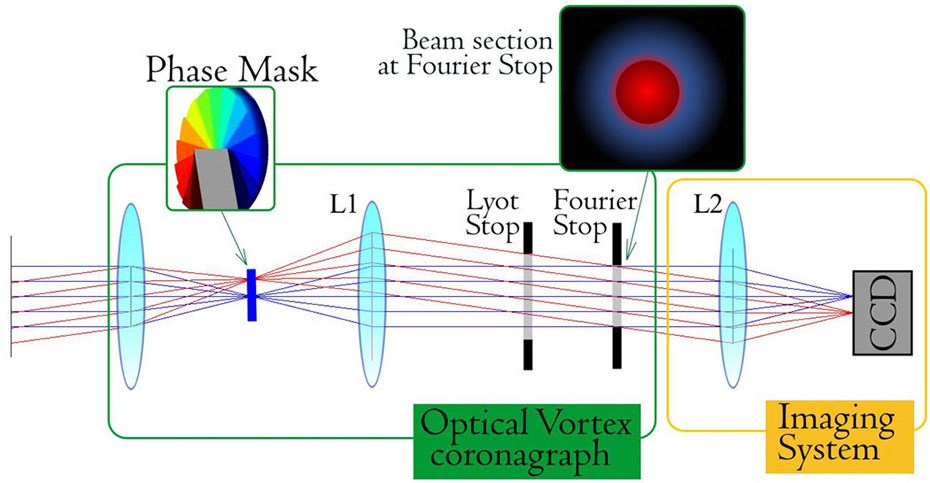 Figure 2. Schematic of the coronagraphic module (not to scale). The light from the bright primary on-axis star (blue rays) is focused on the tip of the phase mask. Thanks to the imparted phase discontinuity, the collimator L1 produces a ring of light blocked by the Fourier stop, whereas the light from the secondary off-axis star (red rays) passes essentially unaltered through the phase mask. In addition to the Fourier stop, we have added a Lyot stop to the collimated beams that blocks the scattered light from the primary mirror for better contrast. The light beams of the strongly attenuated primary and of the secondary are then focused by lens L2 onto the scientific CCD camera.

In the Aqueye Plus solution the light from the primary star is blocked by the Fourier stop. But a second Lyot stop has been added to baffle the light scattered from the primary mirror (see Figure 1). To obtain good suppression of the primary star, its light must be concentrated as well as possible on the phase discontinuity at the tip of the phase mask. To this end, we have added an AdOpt module. The module is driven by a suitable controller that uses the TTL (a standard type of connector) outputs of the four SPADs that collect the fraction of light entering the Aqueye unit to correct for defocus as well as tip and tilt. The AdOpt module can also be used independently of the coronagraphic module for normal high-speed photometry, should the star be bright enough to produce a useful signal for driving the deformable mirror.

Figure 3. The current Aqueye Plus mechanical design. Left: Top view. The light enters from the upper part and either goes directly to the Aqueye pyramid feeding the four SPADs at the bottom or is partly diverted by the dichroic beam splitter to the coronagraphic module on the left. Right: Side view. The overall dimensions are within 0.7×0.9×0.45m. The total mass is <60kg.

In conclusion, Aqueye Plus aims to provide a real-life demonstration of the novel, scientifically exciting results obtainable on ground telescopes by photometers equipped with photon-counting devices, AdOpt modules, and OV coronagraphy modules. The instrument will provide extremely useful data for the design of a second-generation version for the very large telescopes of the future. The mechanical design incorporating these features is shown in Figure 3. We are presently in the realization phase of the instrument, and we plan to operate Aqueye Plus for the first time at the end of the year.

The work described in this article is partly supported by the University of Padova under the Quantum Future strategic project, for which Paolo Villoresi is principal investigator.

Cesare Barbiere is professor of astronomy. He has directed the construction of several telescopes, for example, the 1.8m telescope in Asiago and the 3.5m Galileo National Telescope, as well as space- and ground-based astronomical instruments. Presently, he is involved in the OSIRIS imaging system of the European Space Agency (ESA) Rosetta mission.

Giampiero Naletto is an associate professor of experimental physics. His research activities include the design, development, testing, and scientific use of innovative optical instrumentation for both space- and ground-based astronomical applications. Presently, he is the experiment manager of METIS, the solar coronagraph of the Solar Orbiter ESA mission.

Enrico Verroi is a postdoctoral fellow and an expert in the optical design of ground- and space-based astronomical instruments.

Mirco Zaccariotto is an assistant professor of aerospace structures. His research focuses on the design of mechanical systems and mechanisms, thermostructural modeling, optomechanical system performance in hostile environments, and non-local theory of solid bodies. He is a co-investigator of the Simbio-Sys experiment on ESA's BepiColombo mission.