Many modern scientific and industrial laser applications—for example, scribing, drilling holes in printed circuit boards, and repairing displays—rely on beam-shaping optics to manipulate the final laser spot size and intensity. In addition, micromachining techniques often require scanning mirror systems to reproduce a pattern over a working field. Although a number of diffractive and refractive optical design approaches enable various beam-shaping effects, only a few can produce a range of these effects using the same beam shaper.

Among the popular beam-shaping optics, field-mapping refractive beam shapers offer many advantages. These include nearly lossless transformation, beam consistency, extended depth of field, and negligible wave aberration, as well as versatility in generating different spot shape and intensity profiles (flat-top, inverse Gaussian or ‘donut,’ and so on). The design basics of these devices are well known and described in the literature.1–3 We developed such a tool, called the πShaper4, 5 (see Figure 1), which has a number of distinguishing features compared with other field-mapping refractive beam shapers.

Figure 1. Working principle of the πShaper. The collimated Gaussian beam is transformed into a collimated flat-top beam by introducing a wave aberration inside the πShaper and providing flat wave fronts at its input and output. Varying input beam size leads to variation of intensity distribution I.

For example, the πShaper works with both TEM00 (i.e. Gaussian) and multimode laser beams, which enables easy switching between different laser sources. The achromatic design of some πShaper models even makes it possible to work with several lasers of varying wavelengths simultaneously. Water-cooled versions of the device are optimized for applications with multikilowatt lasers. Finally, implementation of the πShaper as a collimator enables direct connection to a fiber or fiber-coupled laser, thus transforming a divergent Gaussian beam into a collimated flat-top one, of the sort used in very high power laser systems. Figure 2 presents the results of beam-manipulation experiments using a TEM00 Nd:YAG (neodymium-doped yttrium aluminum garnet) laser. Further examples are detailed elsewhere.5 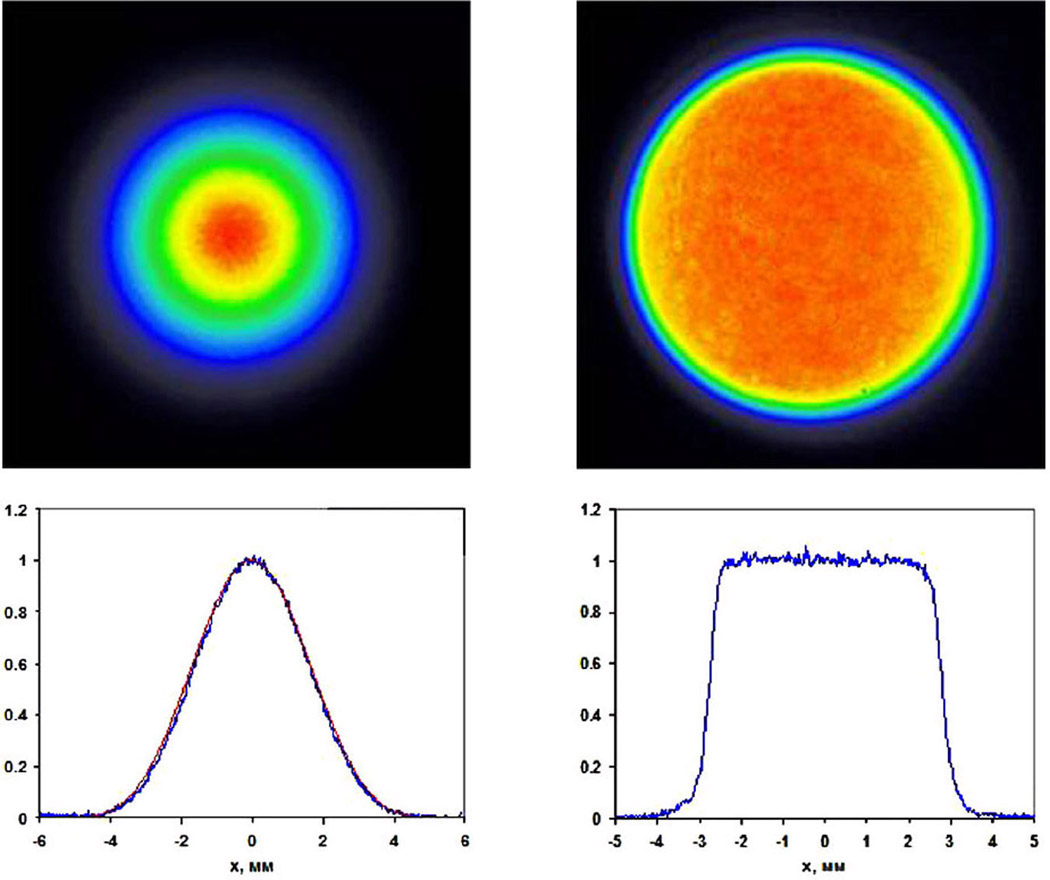 Typical πShaper output beam sizes measure several millimeters. Consequently, to demagnify a flat-top beam and provide spots below 100μm, one can apply an imaging optical system composed of a scanning head with a standard F-Θ lens and an additional collimator (see Figure 3). The πShaper output is considered as an object and coincides with the front focal plane of the collimator. The image is created in the back focal plane of the F-Θ lens. The achievable magnification of the imaging system extends down to 1/200×, which makes it possible to create spots of about 30μm.6 Adding a square aperture or an iris to the πShaper output enables one to obtain a final spot that is square-shaped or variably sized, respectively.

Figure 3. Layout of complete beam-shaping system with compact collimator. Here, 2u indicates beam divergence that is equal to the divergence of the input laser beam 2Θ.

A major challenge of this approach is the large (typically several meters) focal length of the collimator. For example, given an F-Θ lens focal length of 100mm and imaging system magnification of 1/100×, the collimator focal length would be 10m, requiring either a bulky installation or many mirrors to bend the beam path. This problem is solved by implementing the collimator as a ‘telephoto’ lens,7 that is, using two off-the-shelf lenses—one positive, one negative—to create a compact optical system (see Figure 3).

To simplify our approach further, in practice we found it advisable to combine all the optical components of the system in Figure 3 between the laser and the scanner in one separate, specially designed beam-shaping unit (BSU, see Figure 4). Such a unit can be integrated into an industrial setup that already contains a laser and a scanner with an F-Θ lens. Figure 5 presents the results of materials processing using a BSU. When a TEM00 laser is used to ablate a thin layer, as is typically done in fabricating solar cells, the resulting hole has a smooth edged heat-affected zone of variable depth (see Figure 5, left). The spot shape is also elliptical owing to astigmatism of the laser beam. Use of the BSU enables complete removal of all these process imperfections (see Figure 5, center). Finally, scanning the final laser spot using standard galvo mirrors and an F-Θ lens allows repeated reproduction of hole size and shape over the entire working field of the system (see Figure 5, right). 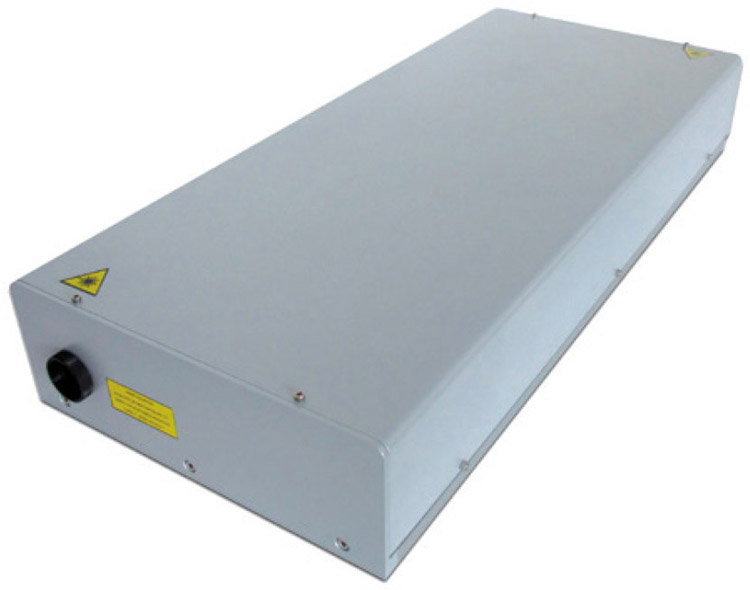 In summary, beam-shaping optics improves micromachining laser technologies in which laser spot homogeneity is either advisable or required. Using imaging optical systems in combination with refractive beam shapers makes it possible to create round and square flat-top laser spots of less than 100μm size while simultaneously providing a scanning function using ordinary galvo mirrors and F-Θ lenses. As next steps, we plan to implement variable magnification of the imaging system to create spots of different sizes and to develop solutions for CO2 and mid-IR lasers.

Alexander Laskin is a project manager, and he is responsible for beam-shaping optics. He graduated from Bauman Moscow State Technical University, Russia (1990), where he also received his PhD (1994). His research areas focus on developing optics for ophthalmology, interferometry, laser systems, and optical instruments.