Planar waveguides, or planar lightwave circuits (PLCs), are a hybrid between optical fibers and silicon microchips. They are used in optical fiber networks as well as in lasers and biological and chemical sensing, and are increasingly becoming the platform of choice for quantum information processing. Conventional PLC fabrication makes use of modern cleanroom technologies such as lithography and plasma-based etching. While ideal for mass industrial production, the lithography and etching approach is costly, cumbersome, and slow for development. Consequently, in recent years laser direct writing has emerged as a viable rapid-prototyping and small-batch-production technique.

Recently we showed that this technique can be used to fabricate devices such as optical Hilbert transformers for single-sideband filters1 and on-chip single-photon-number-resolving detectors for telecommunication wavelengths,2 and demonstrated multiphoton quantum interference for applications in quantum computing.3 Figure 1 shows a photograph of the quantum interference device. All of these devices benefit from one or more of the unique qualities of direct UV writing. 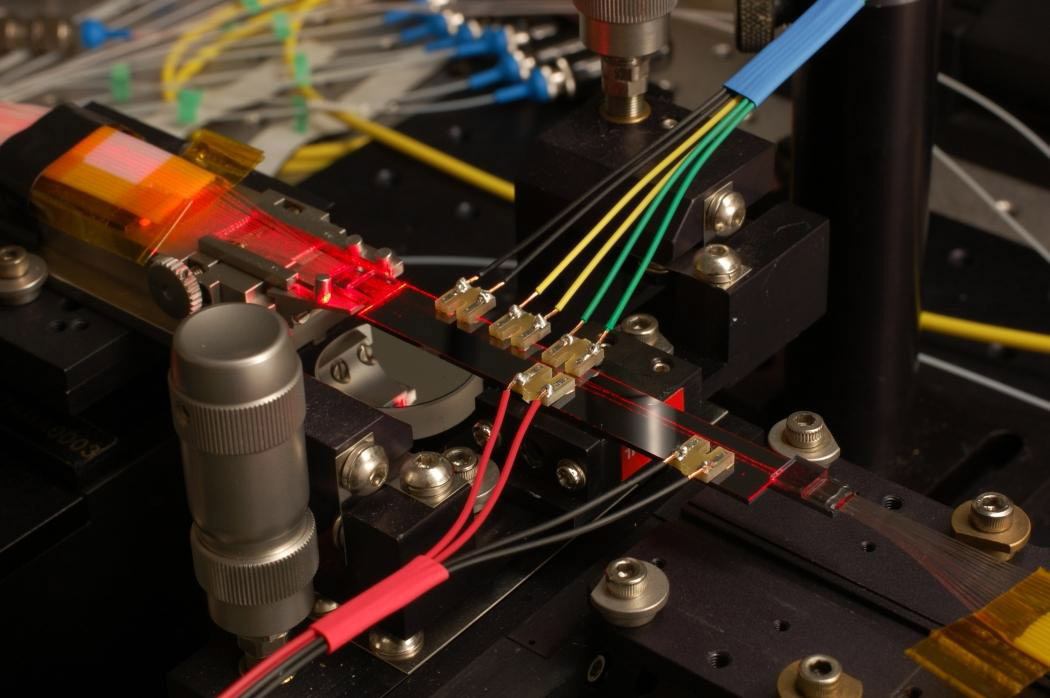 Figure 1. Image of a planar lightwave circuit used to demonstrate multiphoton quantum interference. Red laser light has been coupled into the device to illuminate some of the waveguides. 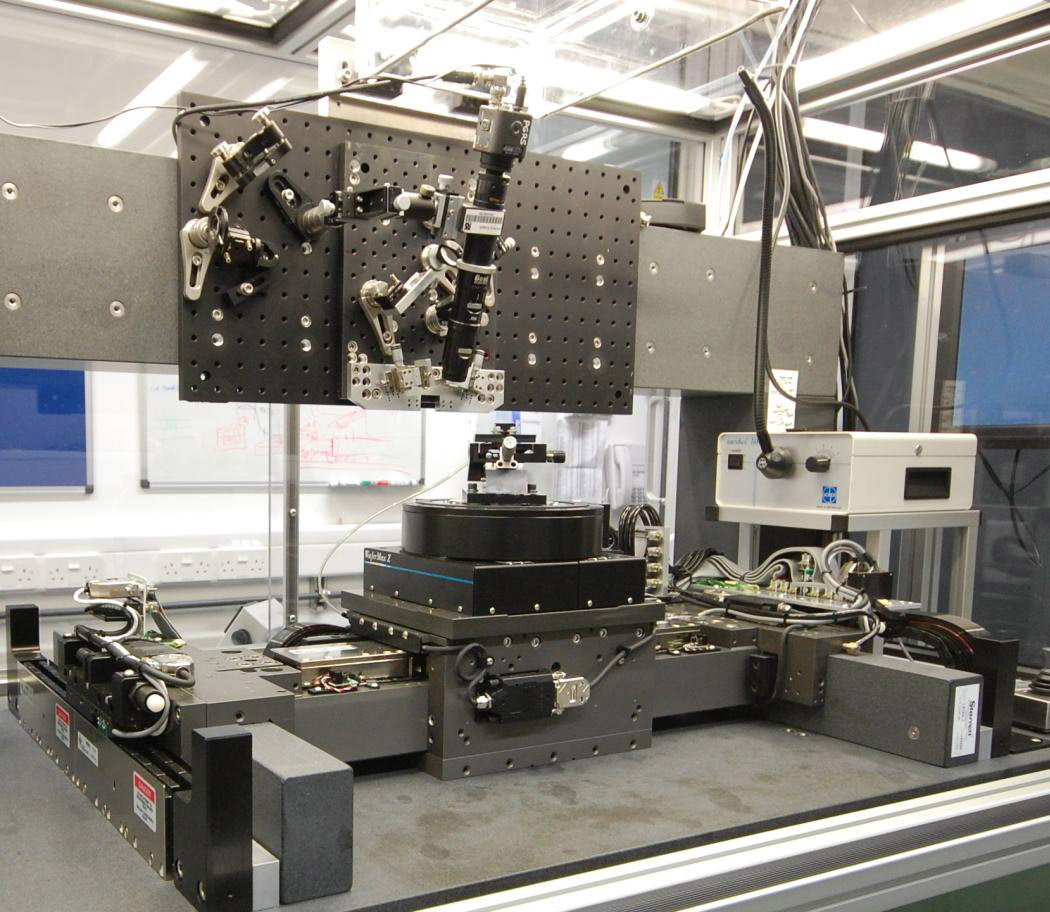 Figure 2. Photograph of the direct UV writing laboratory at the University of Southampton and the precision air-bearing stage system.

The basic principle of the process involves modification of a glass layer by translating the substrate under a focused UV laser beam (λ = 244nm, where λ is the wavelength). Figure 2 shows a photograph of the laboratory setup. The area exposed to UV radiation increases in refractive index and can be used to generate a waveguide. Using different layers of glass, one of which is photosensitive, enables fabrication of a range of waveguide structures.

A crucial feature for some applications is the nanometer-scale smoothness of the surface of these waveguide devices, which can be very difficult to achieve conventionally. This was an important requirement for our demonstration of single-photon detectors, where we used a 40nm-thick layer of superconducting tungsten as a highly sensitive bolometer to quantify small photon counts.2 Excessive surface variation can have a detrimental effect on the superconducting properties of the device.

Our direct UV writing approach employs two interfering beams from an interferometer to imprint the desired Bragg grating structure and waveguide (see Figure 3). During fabrication the sample is translated, using precision air-bearing stages, relative to the two intersecting UV beams. The beams are focused into the substrate (optical chip or optical fiber) and through amplitude or phase modulation of the beam's electric field allow precise control of the phase and amplitude of the resulting Bragg grating structures. We recently realized a photonic Hilbert transformer that, when used in conjunction with a reflection Mach-Zehnder device, produced a single sideband filter.1 Figure 4 shows an example of the reflection spectrum of the fabricated Bragg gratings. 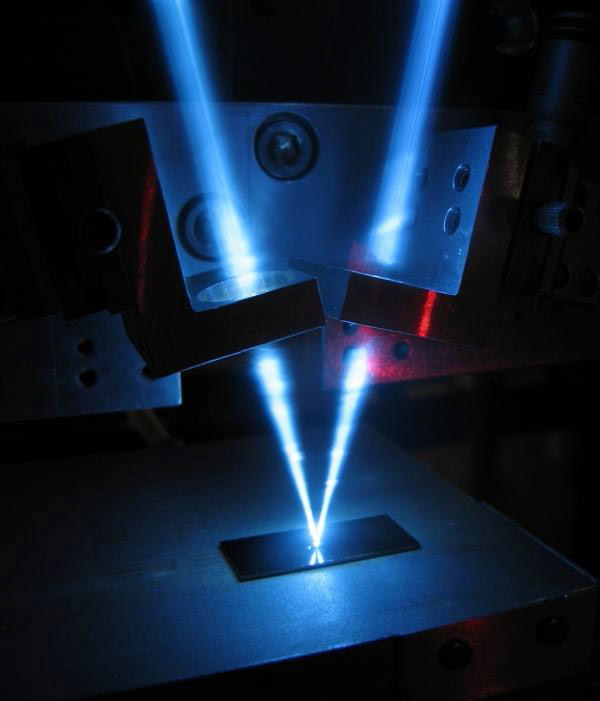 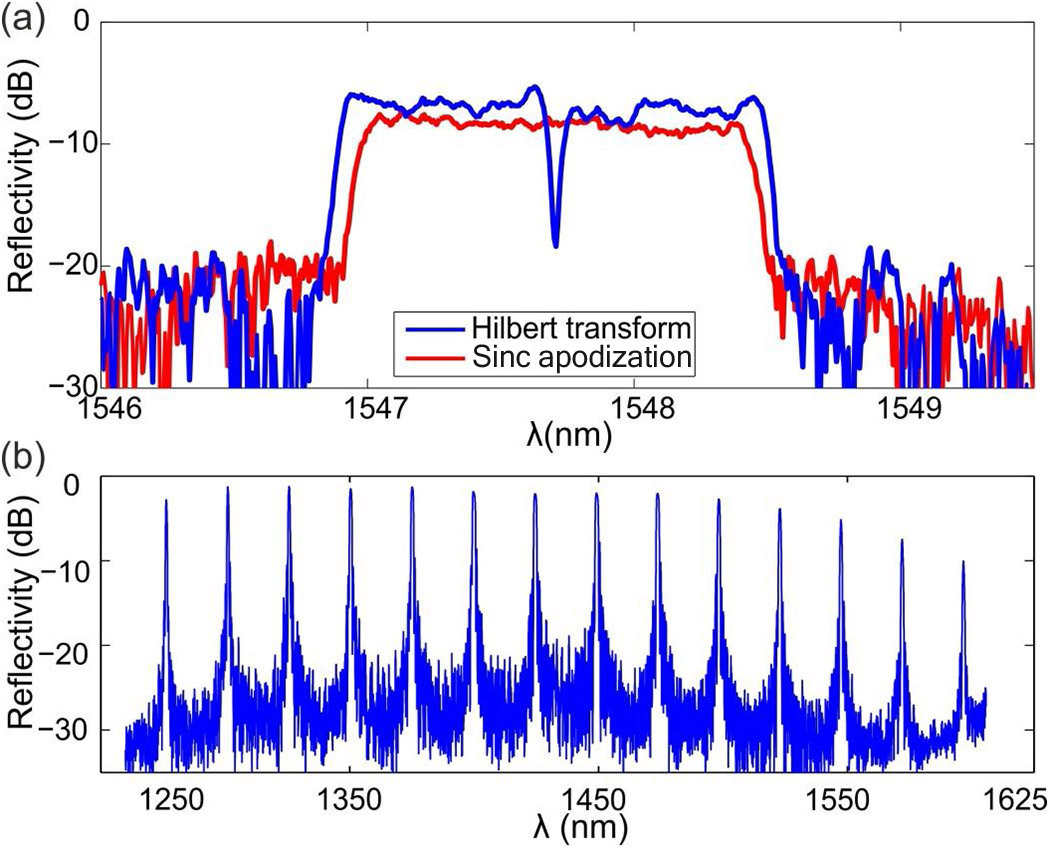 Figure 4. (a) Reflectivity of two different waveguides, one containing a sinc-apodized grating (i.e., with a rectangular spectral function) and the other a Hilbert transform grating. (b) The reflectivity of a single waveguide containing 14 Bragg gratings spectrally spaced from 1240 to 1600nm. λ: Wavelength.

Using a series of Bragg gratings written within a PLC structure makes it possible to nondestructively determine its precise optical characteristics, such as propagation loss and dispersion.4, 5 We are now using this same technique to interrogate the coupler ratios in our next-generation quantum information processing devices.

Another advantage of direct UV writing over conventional semiconductor processing is perhaps more subtle. While semiconductor chips often contain local feature sizes as small as 80nm, Bragg gratings require a phase accuracy of several nanometers over a distance of several millimeters. This is a manifestation of high precision different from that normally considered in nanotechnology and silicon fabrication. These devices require both precision over long distances and very high uniformity of materials across a device. An essential part of the research is the development of the glass layers, grown by means of our flame hydrolysis deposition system. The system produces 150mm-diameter wafers with uniform, low-loss layers of tailored-refractive-index glass. A key aspect has been the development of high-photosensitivity materials yielding grating refractive-index contrasts of 1 × 10−3.

Direct-UV-written PLCs and the unique features that they present have been used across a range of fields. In particular, the inclusion of Bragg gratings into circuits is a key enabling technology. This was recently highlighted by our fabrication of a Hilbert transformer, which represents the first demonstration of a realizable and practical device.1 Our current work is focused on using UV-written devices to provide wavelength locking, stabilization of semiconductor diodes, and filtering in telecommunication networks, as well as to make ultrasensitive transducers for strain and temperature.