The 2D structure and excellent electronic properties of graphene have generated worldwide interest, and offer the potential to overcome the limitations of silicon electronics.1 Early graphene-based devices consisted of a single atomic layer, but the possibility of tailoring electronic properties by stacking several different 2D crystals atop each other has since been discovered.2–5 In the assembly of these multilayer heterostructures, unwanted materials can become trapped between layers, adversely affecting the device quality. Understanding the cause of performance variations and thereby optimizing the properties of these devices is an extremely challenging task. 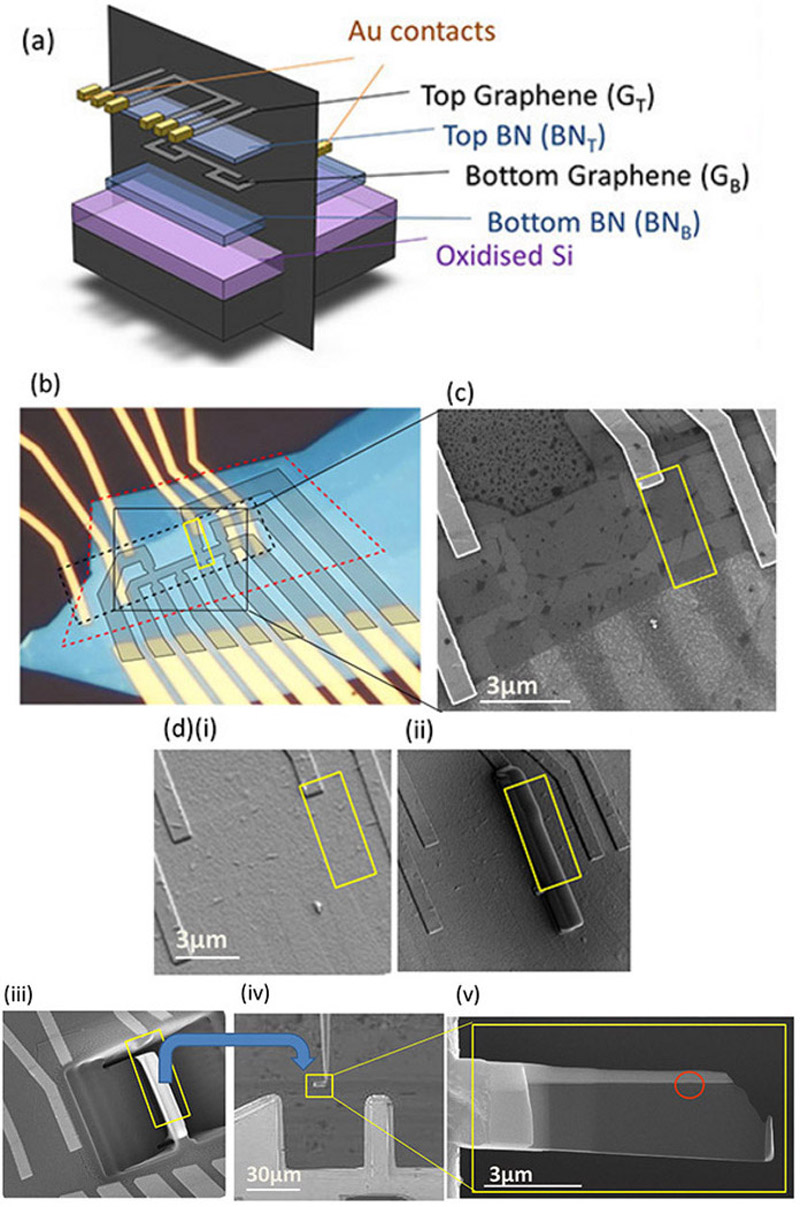 Figure 1. (a) Schematic image showing the device structure and intended cross-sectional slice geometry. The heterostructure incorporates layers of boron (BN) and graphene (G) with gold (Au) contacts on an oxidized silicon (Si) substrate. (b) Optical image of actual device structure, with different layers indicated. Scanning electron microscopy images show (c) top-view image of device and (d) the process of sample preparation. (d)(i) The surface of the coated sample, (ii) after depositing protective platinum strip, (iii) after etching around all sides of the slice with a gallium ion beam, and (iv) a slice removed from the device using a nanomanipulator needle. (v) The slice is ready for transmission electron microscopy imaging after being attached to the grid and polished to reach a thickness of 20nm.

Using high-resolution transmission electron microscopy imaging, a top view of the atomic structure of free-standing graphene sheets has been revealed.6–12 However, as the number of layers increases, these images become difficult or impossible to interpret due to the uppermost layers obscuring the view of lower layers. Characterizing the uppermost layer of a device is possible using a wide range of surface-sensitive analytical techniques, but these approaches are insensitive to buried interfaces. To characterize the structure of graphene devices, we have pioneered an unusual approach that involves the extraction of cross sections.13, 14 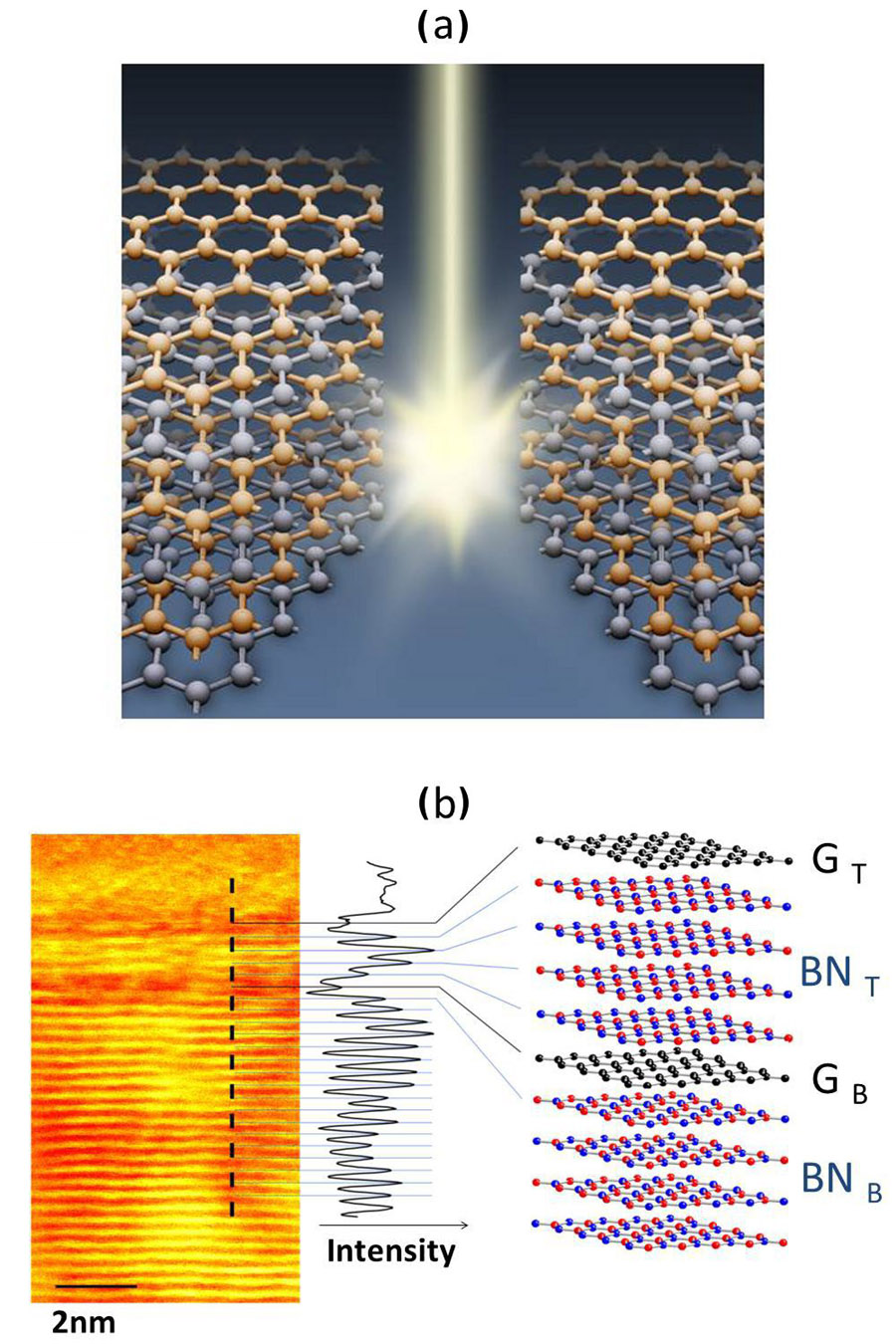 Figure 2. (a) Artistic image illustrating the focused ion beam cutting through a multilayered atomic structure. (b) Cross-sectional high-resolution scanning transmission electron microscopy image in which each horizontal line represents individual atomic layers within the structure. To the right is an intensity scan through the image, allowing the distance between individual atomic planes to be measured.

Focused ion beam milling is a technique in which a beam of ions (we use gallium) is focused on the sample, locally eroding the surface in a highly controlled fashion. This method has been used to image a wide range of devices, including 3D nanostructures, and has also found application in the preparation of thin sections of material suitable for transmission electron microscopy imaging. The major benefit of this approach, compared with conventional sample preparation routes, is the ability to select the region of interest to an accuracy of better than a few micrometers.

In our work, we have focused our studies on heterostructure devices in which mono- and bilayer graphene crystals are individually contacted and interlaid between layers of other atomically thin crystals, such as boron nitride and tungsten disulfide (WS2). After microfabrication5 and electron transport measurements, we used focused ion beam milling to extract thin cross-sectional slices from the active region of each device. A sample preparation approach known as the lift-out method was used: see Figure 1(d). The extracted slice was subsequently transferred and attached to a grid for high-resolution scanning transmission electron microscopy (STEM) imaging.15, 16 We have found that by reducing the thickness of our cross-sectional slices to 20–70nm, analyzing the structure of the individual atomic layers within the device is possible.17, 18

Figure 2 shows one of our investigated devices. This device consists of monolayer graphene placed on top of a relatively thick (30nm) boron nitride crystal, covered with a few-layer boron nitride spacer and a second graphene sheet. We were able to locate the position of the graphene sheet both visually and from the chemical signal obtained using electron energy loss spectroscopy, allowing us to estimate the boron nitride spacer thickness (four atomic layers). Our estimated value is in agreement with both the atomic force microscopy measurements during fabrication and the tunneling characteristics of the device.19 We also sectioned a region of the device in which residual contaminants were present, allowing us to gain a better understanding of the origins of the contamination.13

Analysis of our high-resolution STEM images has allowed us to qualitatively compare the interlayer separations and atomic roughnesses. We found that the spacing between boron nitride and graphene planes is indistinguishable from the basal plane separation in the bulk material. This suggests that there cannot be more than a small fraction of a monolayer of adsorbates trapped between the two materials: the interface is practically clean and atomically sharp. In addition, comparing the roughness of different atomic layers revealed a significant difference in the average roughness between the graphene planes at the top and the bottom. This variation correlates with the twofold difference in the electronic mobility that was measured across different layers.13

In summary, our new approach to structural characterization for graphene electronics has demonstrated that new kinds of heterostructures with atomically sharp interfaces can be assembled in various combinations from the available library of 2D crystals. We found that contamination segregates into isolated pockets, leaving the buried interfaces clean and atomically flat. In addition, our work shows that cross-sectional structural imaging can be a useful tool to aid the interpretation of transport measurements and therefore enable further progress in graphene-based electronics. In the next stage of our work we will look at new structures that include other 2D materials, such as WS2 and molybdenum disulfide, in order to better understand the novel properties of these devices.

We would like to acknowledge research from the UK Engineering and Physical Sciences Research Council and from the US Defense Threat Reduction Agency.

Sarah Haigh is a lecturer in materials science at the University of Manchester. Her research focuses on high-resolution imaging and elemental analysis to study a range of novel material systems, including graphene-based high-mobility transistors, mixed-metal nanoparticle catalysts, and high-performance alloys.