A trio of advances address the performance challenges in an otherwise popular, easy-to-implement method of assessing displacement and strain in materials and structures.
30 July 2013
Bing Pan

Originally established and advocated by a group of researchers at the University of South Carolina in the 1980s,1 the technique known as digital image correlation (DIC)2–4 has undergone not only significant advances in technical development,3–8 but also a burst of applications in the past 30 years. As an image-based, non-contact, non-interferometric means of optical metrology, DIC has been used in a wide range of scientific research and engineering fields to determine deformation behavior, measure mechanical parameters, and validate simulations and models of materials and structures at different temporal and spatial scales. The fundamental principles and details of the approach have been documented in numerous books and review articles. However, DIC is still evolving. To be broadly useful, the method must ultimately be able to deliver high accuracy, fast or even real-time motion, deformation, and shape measurements, and wider applicability, ranging from common laboratory conditions to harsh or extreme environments. Here, we briefly review enhancements we recently made to DIC in the areas of measurement accuracy, computational efficiency, and scope of application.

To achieve high-accuracy measurement, the errors associated with the two separate stages of DIC—image recording and calculation—must be comprehensively and carefully considered. For example, because the images captured by a digital camera are 2D projections of real 3D objects, in 2D-DIC the accuracy and stability of this projection are vital to the final measurement. We found that the ideal pinhole imaging model implicitly assumed for a 2D-DIC system is neither perfect nor stable owing to out-of-plane motion in test planar samples caused by loading, variation in camera temperature, and inevitable lens distortion. In certain cases, these unfavorable factors can lead to significant errors in measured displacement and strain. To minimize such errors, we devised a 2D-DIC system that uses a high-quality bilateral telecentric lens.5 We also proposed a generalized compensation method using a non-deformable reference specimen for achieving high-accuracy 2D-DIC measurements with a low-cost imaging lens.6 The displacements of the reference sample placed just behind the test sample faithfully transmit errors owing to loading, temperature variation, and imaging, and subsequently can be removed from the displacements of the test sample surface to improve measurement accuracy. Experimental results of uniaxial tensile tests performed on standard tension aluminum specimens showed that the accuracy of the measured strains using these two approaches is comparable to that measured by strain rosettes (i.e., gauges: see Figure 1).5 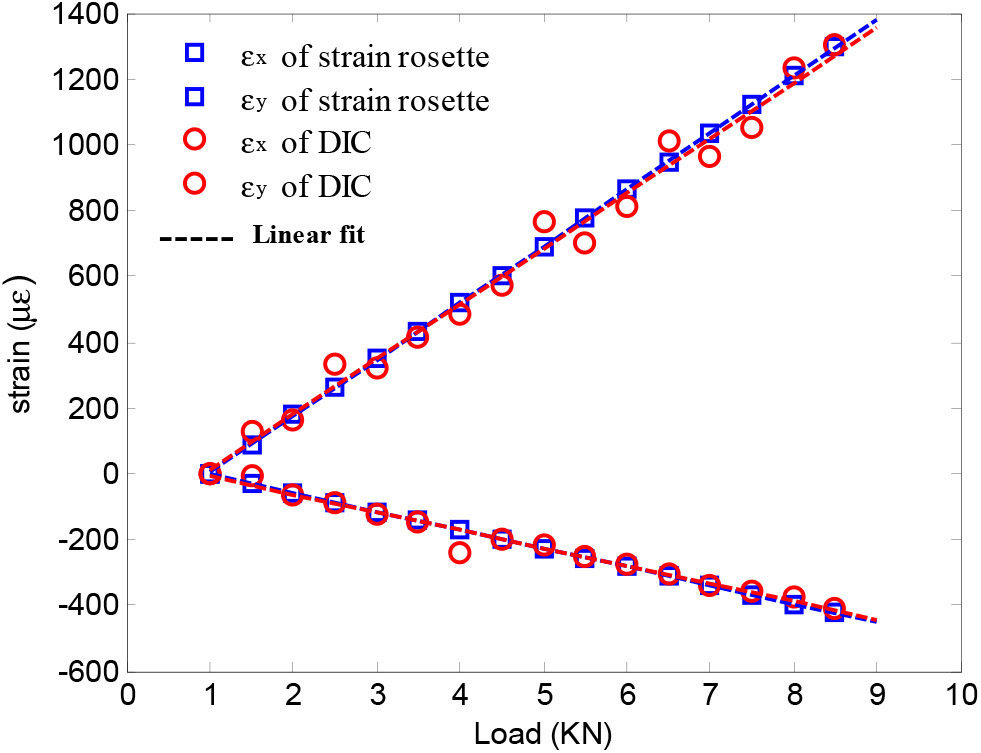 However, with the growing use of high-resolution digital cameras and the frequent need to process large sequences of images recorded in dynamic testing, high-efficiency DIC analysis has become increasingly important. To eliminate the redundant computations involved in conventional DIC using the classical so-called forward additive NR (FA-NR) algorithm without sacrificing its subpixel registration accuracy, we proposed a more efficient inverse compositional Gauss-Newton (IC-GN) algorithm for fast, robust, and accurate full-field displacement measurement.9 Specifically, to optimize the robust zero-mean normalized sum of squared difference criterion to determine the desired deformation parameters, we introduced an IC-GN algorithm10 that obviates having to re-evaluate and invert the Hessian matrix (i.e., curvature) in each iteration. We employed a reliability-guided displacement tracking strategy to achieve further speed advantage by automatically providing an accurate and complete initial guess of deformation for the IC-GN algorithm implemented on each calculation point. Finally, we employed an easy-to-implement interpolation coefficient look-up table approach to avoid the repeated calculation of bicubic interpolation at subpixel locations. With these improvements, the redundant calculations involved in various procedures (i.e., initial guess of deformation, subpixel displacement registration, and subpixel intensity interpolation) typical of conventional DIC calculations are eliminated. The newly developed DIC method using the IC-GN algorithm and the existing fast DIC approach based on the FA-NR algorithm8 generate similar results. But the former is about three- to five-times faster and we, therefore, expected it to be a standard full-field displacement tracking algorithm in DIC.

The use of DIC for deformation measurement in outdoor or extreme high-temperature environments has been a major challenge. Variable ambient light and the increasing thermal radiation of hot objects intensify brightness and lessen image contrast, leading to errors in analysis. Recently, however, we managed to greatly extend the application range and robustness of DIC. We devised novel active-imaging 2D- and 3D-DIC systems11–13 based on a combination of monochromatic light illumination and narrow bandpass filter imaging (see Figure 2). Improving the illumination source and imaging system made it possible to address the de-correlation problem of speckle patterns caused by variations in ambient light or the black-body radiation of a hot test object, in turn enabling reliable deformation measurement in non-laboratory and extreme high-temperature environments. As these active-imaging 2D- and 3D-DIC systems overwhelmingly outperform conventional DIC systems in terms of robustness, practicality, and scope of application, we see no impediment to their widespread use. 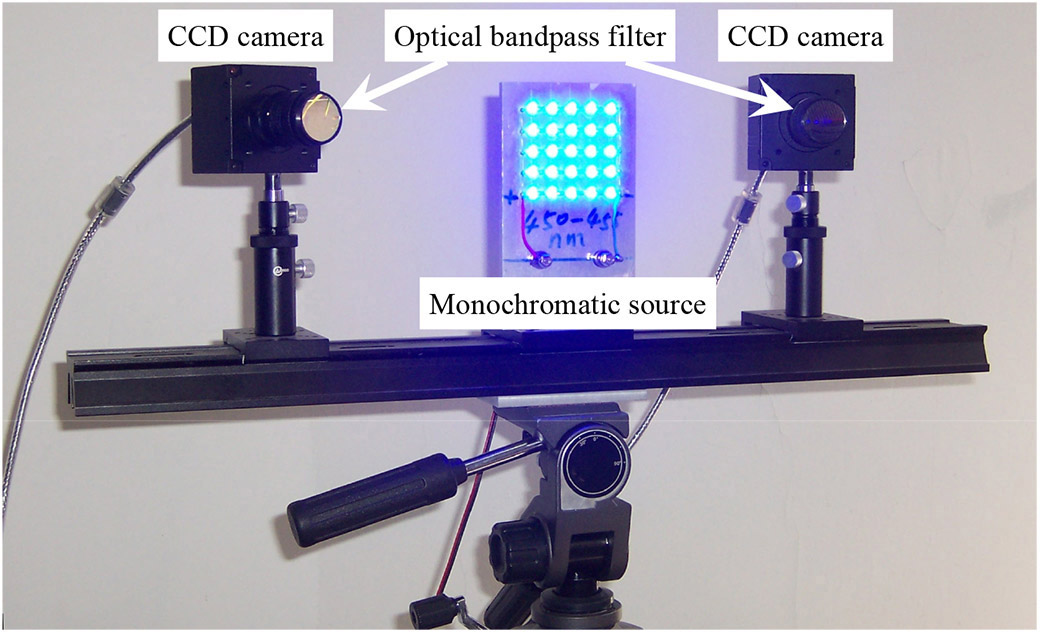 Figure 2. The ambient-light-insensitive active-imaging 3D-DIC system is based on a combination of monochromatic illumination and coupling bandpass filter imaging (details available elsewhere13).

Over its long history, DIC has been continuously improved by many researchers. Moreover, its applications have expanded from regular metal or polymeric materials to special composite and biological materials, from the macroscopic to the microscopic scale, from static or quasi-static loading to high-speed dynamic loading, and from common laboratory conditions to extreme high-temperature environments. This article encapsulates important recent advances we have contributed to this simple but useful technique. However, the ultimate objective of developing intelligent DIC for fully automatic, real-time, high-accuracy measurements remains. We will devote our future efforts to this end.