The Laser Relativity Satellite is built from a specifically chosen, dense tungsten alloy and is covered with laser retroreflectors to test general relativity and fundamental physics.
21 October 2013
Ignazio Ciufolini and Antonio Paolozzi

In 1998, scientists discovered that the expansion of the universe is accelerating (see Figure 1).1,2 This exciting and important finding led to the 2011 Nobel Prize in physics. It is thought that a form of dark energy, or quintessence, causes the acceleration of distant supernovas. Such dark energy and dark matter (a mysterious gravitating component in galaxies) are estimated to constitute about 95% of the universe. However, changes to Einstein's theory of general relativity have been proposed as an alternative explanation for the accelerating cosmological expansion. Therefore, there is renewed interest in performing experimental tests of Einstein's gravitation theory, which provided the basis for the original prediction of an expanding universe. 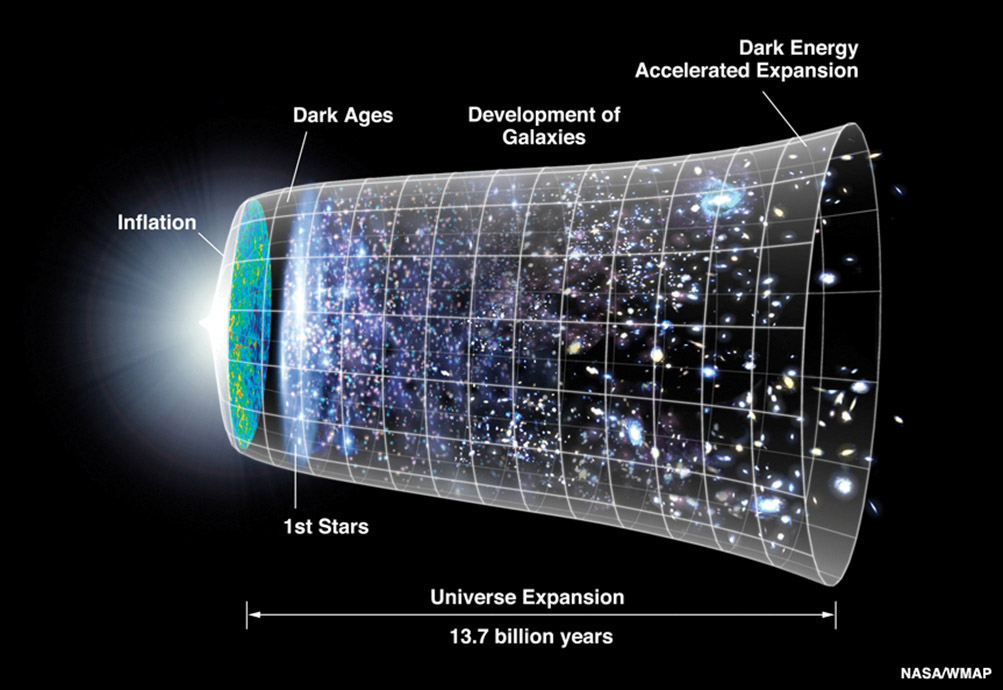 Figure 1. A representation of the expansion of the universe and its acceleration, as observed today. (Image courtesy of NASA.)

Frame-dragging, or dragging of inertial frames, is a twisting of spacetime caused by the gravitational field generated by a rotating body (e.g., the Earth), or by a current of mass.3, 4 This phenomenon is predicted by general relativity, but there is nothing similar in Newton's theory of gravitation. In the theory of general relativity, the inertial reference frames are not fixed with respect to the distant 'fixed' stars, but are dragged by the rotation of a body. In fact, a rotating body can drag spacetime around itself in a similar manner to the dragging of a viscous fluid by an object that is immersed in it. The effects of frame-dragging around rotating black holes is dramatic (see Figure 2). Some mathematical calculations indicate that it might be possible, at least in principle, to travel back in time when moving around these objects. 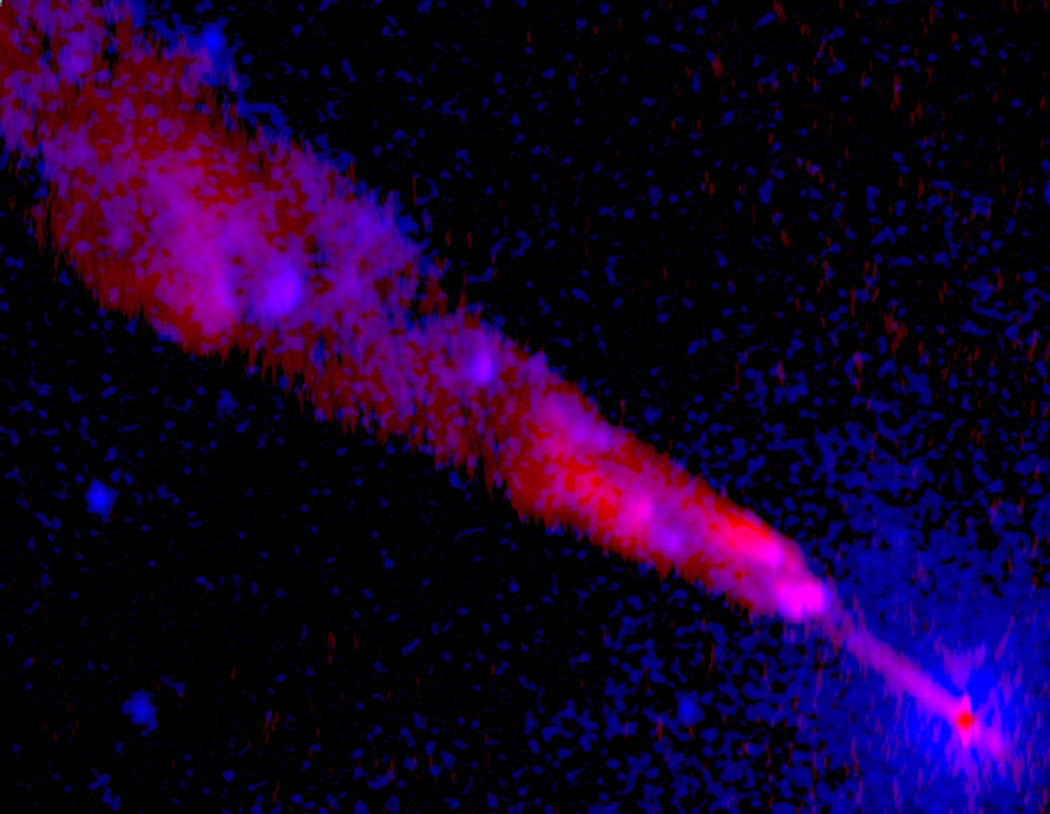 Figure 2. Composite image of the jet from radio galaxy Centaurus A. The radio emission data (obtained from the Very Large Array radio observatory) is shown in red and the emission in x-ray wavelengths (data obtained from the Chandra X-ray Observatory) is shown in blue. This phenomenon is evidence for the presence of a rotating black hole. (Image courtesy of Martin Hardcastle, Bristol University.7)

The effect of frame-dragging around the Earth is very small because the gravitational field is weak. Thus, a dedicated satellite is required for measurement of the effect. We have designed and launched the Italian Space Agency's Laser Relativity Satellite (LARES)—see Figure 3—for this purpose. LARES, together with determinations of the Earth's gravitational field made with Gravity Recovery and Climate Experiment space mission data,3, 5,6 will provide frame-dragging measurements with an error of about 1%. This represents an order of magnitude improvement on previous measurements made with the Laser Geodynamics Satellites (LAGEOS). 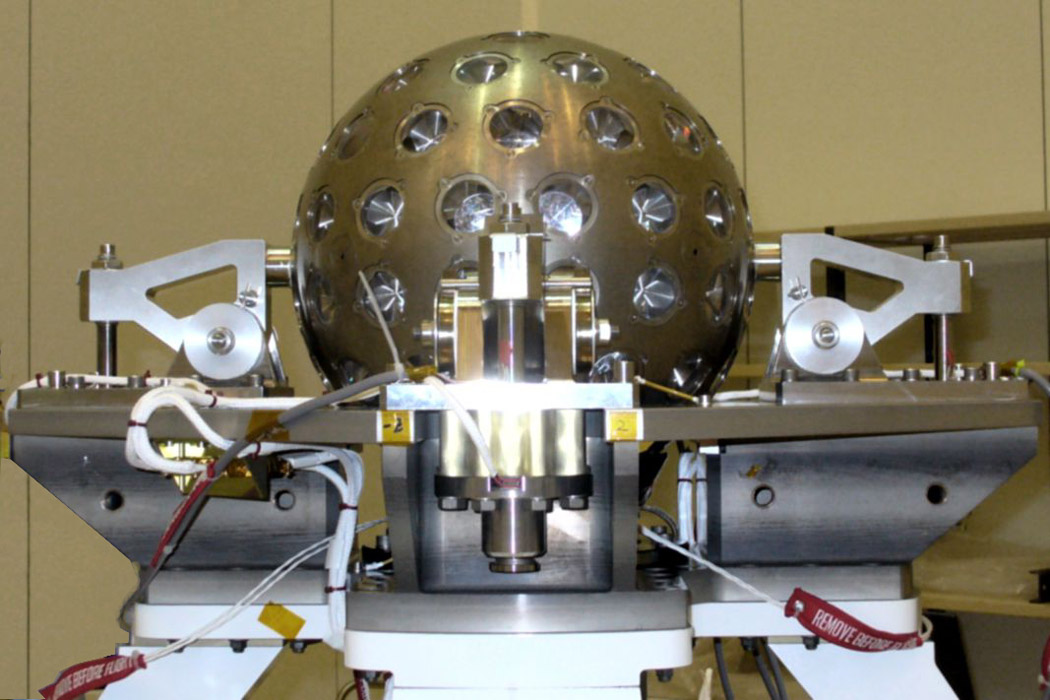 Figure 3. The Laser Relativity Satellite (LARES) atop its separation system. (Courtesy of the Italian Space Agency.)

LARES, like LAGEOS, does not have power or communication systems. The satellite, however, is covered with retroreflectors and we track its motion using the International Laser Ranging Service. We use the time of flight of laser pulses, sent to the satellite and reflected back to the ground station, to determine the distance to the satellite with an error of only a few millimeters.

Experimental verification of geodesic motion (inertial motion of test particles) is critically important to general relativity and other fundamental physics theories. Although our LARES frame-dragging measurements will last several years, we have already shown that the orbit of the satellite is closer to the geodesic motion predicted by general relativity than any other artificial satellite. After considering the known non-gravitational perturbations (e.g., radiation pressure, particle and thermal drag), we find8 the orbit of LARES has a residual mean acceleration of less than 0.5×10−12m/s2. Satellites similar to LARES can therefore be used for further experimental tests of gravitational and fundamental physics.

We have combined state-of-the-art technologies and a simple satellite design to achieve the high measurement accuracy of LARES.9 The passive satellite is spherical in shape and built from a tungsten alloy that has never been used in a satellite before. The alloy we chose has 1.5 times the density of lead, as well as resistance and hardness values comparable to those of steel. LARES has the highest average density of any orbiting object in the solar system. Another aspect of our innovative design involved constructing the sphere from a single block of the alloy, which allowed us to reduce orbital perturbations caused by thermal thrust.

The LARES satellite will be used to accurately verify the phenomenon of frame-dragging that is predicted by general relativity. In addition, results from LARES can help test string theory. Using measurements from LAGEOS, a lower limit to the so-called Chern-Simons mass was estimated. The Chern-Simons mass is thought to be related to fundamental parameters, such as the temporal variation of a cosmological scalar field that is potentially connected to quintessence.10 Some cosmologists and theoretical physicists believe that the orbit of a satellite will experience additional drift, which is predicted by string theory. Using LARES measurements, we hope to improve the estimate of the Chern-Simons mass lower limit and provide experimental constraints on string theory.

Ignazio Ciufolini is jointly affiliated with Centro Fermi in Rome. He is the principal investigator of the LARES space experiment of the Italian Space Agency and is the recipient of several notable prizes. These include the 1996 American Association of Publishers award for the best professional and scholarly book in physics and astronomy, the 2001 International Tomassoni-Chisesi Award, and the UK Institute of Physics Occhialini medal in 2010. He is currently nominated for a 2013 World Technology Award in the space category.

Antonio Paolozzi is the design leader of the LARES satellite and the principal investigator of the Specular Point-like Quick Reference experiment on the International Space Station. He was also a member of the CERN Compact Muon Solenoid experiment team. He has been nominated for a 2013 World Technology Award in the space category.