Remotely sensing the complexity of rivers and estuaries

Data from the Hyperspectral Imager for the Coastal Ocean (HICO), combined with innovative spectral processing algorithms, can reveal detailed pictures of the sources of water pollution.
22 July 2013
Curtiss Davis and Nicholas Tufillaro

The coasts of oceans are rich and complex environments. Over half the world's population live on the coast or along river systems. Water resources in these regions are used for transportation, waste disposal, fisheries, and industries such as oil and gas production. Unfortunately, it is difficult to study these environments using visible remote sensing techniques. Due to water's strong absorption of visible light, oceans appear dark relative to land in remotely sensed images. In addition, coastal regions are often spatially and spectrally complex. Several color agents, such as sediments from land runoff and pigments from biological productivity (e.g., plankton blooms), are stirred together by tidal forcing and strong coastal currents in these locations.

The Hyperspectral Imager for the Coastal Ocean (HICO) was designed to unravel this complexity and is the first space-borne hyperspectral imaging spectrometer that specifically samples ocean coasts. The system has been operating on the International Space Station since October 2009 and has so far captured over 8000 images. This data can be accessed through the Oregon State University HICO website.1

With HICO, selected coastal regions can be targeted. Measurements with full spectral coverage (88 channels between 400 and 900nm) are made at distance intervals of 92m on the ground.2, 3 We have used this data to study estuaries and coastal rivers in the USA and Asia. The high spatial resolution and continuous spectral sampling of HICO makes it particularly valuable for these studies.

A key advantage of HICO data is the continuous spectra obtained for each pixel. These provide the opportunity to develop new water remote-sensing algorithms, beyond band ratios, that are based on the analytical spectroscopy techniques that have been refined in laboratories. One example is derivative analysis. Derivatives highlight the abrupt changes in spectral shape that are indicative of absorption and scattering features being observed.

We have used derivative analysis to asses the best wavelengths at which to sample several features, such as river plumes and algal blooms.4–6 Figure 1 shows a HICO image of the Elwha River flowing into the Strait of Juan de Fuca, north of Washington state, USA. The large sediment runoff is due to the removal of dam beginning in September 2011. These particular sediments produce a strong signal in the first derivative of the spectrum at 716nm—see Figure 1(c)—due to a combination of water absorption and sediment backscatter. We use this sediment signature to target and track outflow from the Elwha River into coastal ocean water.

Figure 1. Hyperspectral Imager for the Coastal Ocean (HICO) image (a) and remotely sensed spectra (b) from the Elwha River on 10 January 2012 (21:56 GMT). The reflectance (Rrs) spectra (b) for the transect shown (a) display a steep decline from 700–730nm for water with high sediment concentration. This results in a negative extrema of the first derivative of the spectrum around 716nm (c). This peak can be used to track the outflow from the Elwha River into the Strait of Juan de Fuca.

Hyperspectral images from HICO can also be used to optimize the wavelengths that are used in product algorithms for specific regions.7 In the Yangtze River region, where sediments are rich in clay, our derivative analysis shows a maximum sensitivity to outflow concentration at 605nm. Our principal component method, like optimized band-ratio methods,7 therefore weighs the sediment production algorithm with an optimized sediment maximum that is trained on regional data (see Figure 2). 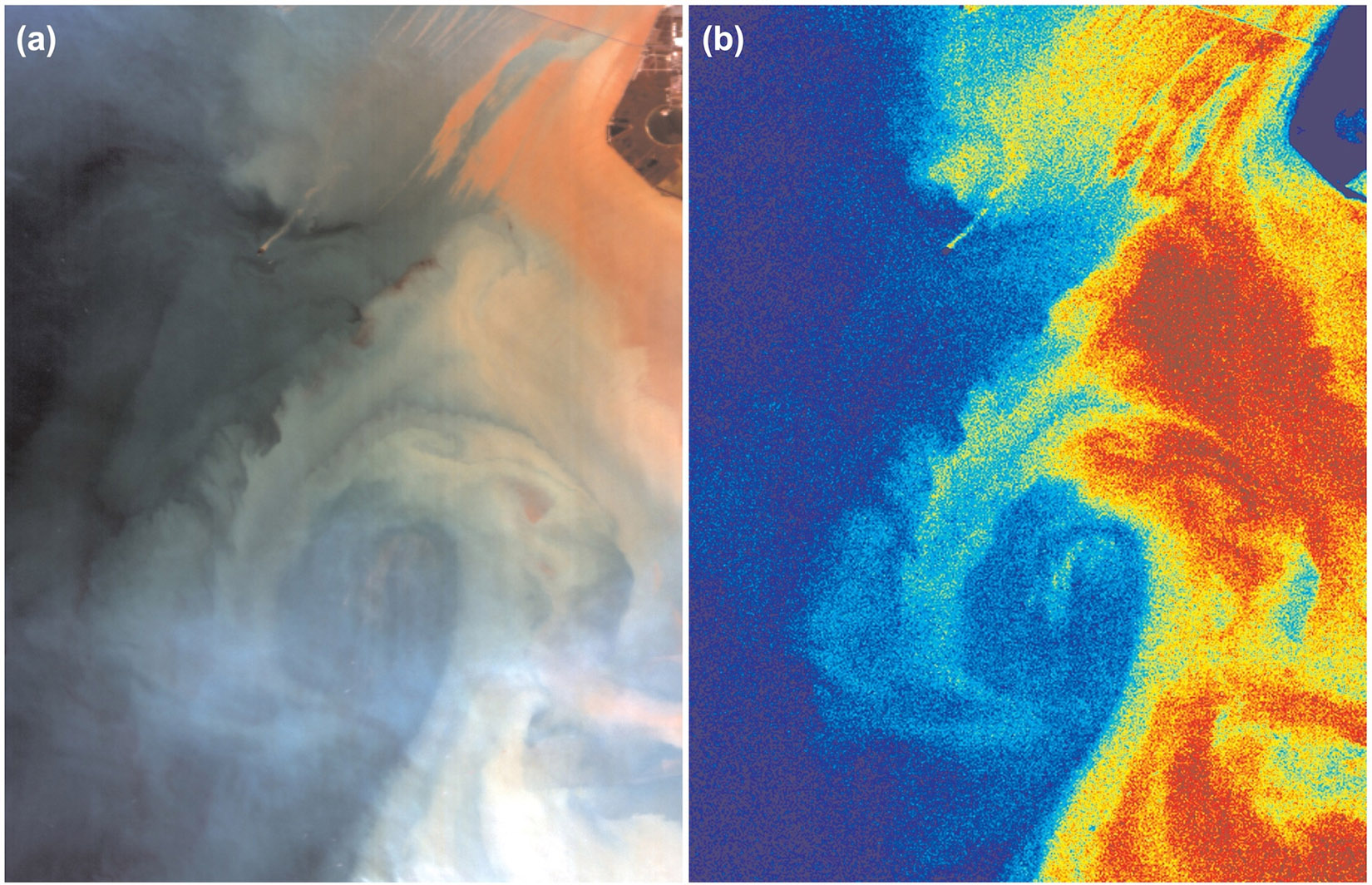 When spectra are described by continuous signals that are parameterized by wavelength, it is possible to study the intrinsic geometry of the data. Using its derivatives, we have defined a phase difference function that can be valuable in detecting rapid changes in the intrinsic geometry of the spectra. The phase difference function is illustrated in Figure 3 for water masses that are on both sides of a bay water/sea-water mixing interface. Red pixels in Figure 3(c) highlight areas with an elevated phase difference, centered at 709nm. These reveal patches of water that presumably contain high algal concentrations, which tend to occur at the interface of the bay and sea waters. This algal bloom may have resulted from the high level of nutrients, particularly ammonia, that are released from sewage plants into the Sacramento River and San Francisco Bay system. 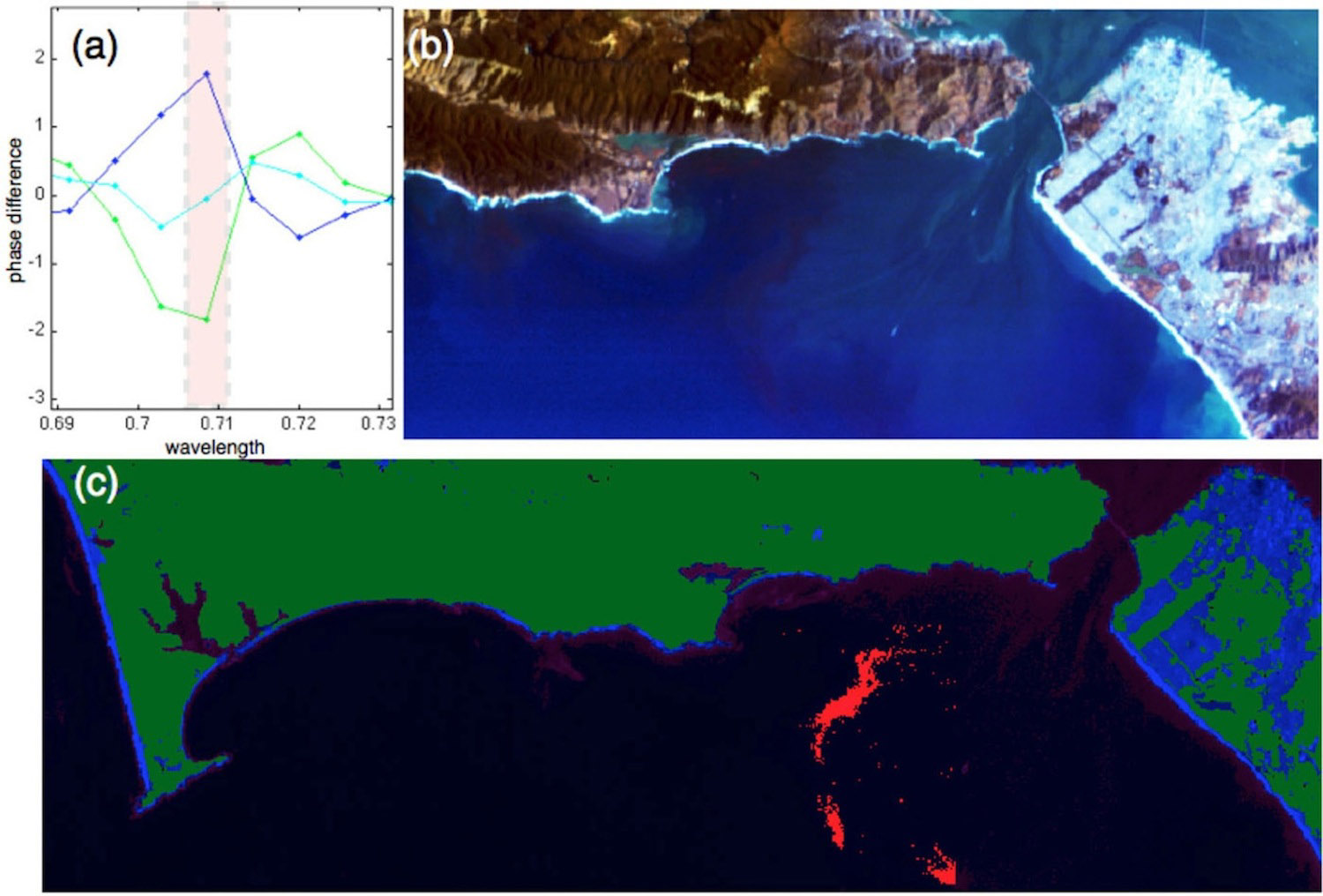 Curtiss Davis is a professor and senior Researcher in the College of Earth, Ocean and Atmospheric Sciences. He has 30 years of experience and over 50 publications on color remote sensing of the ocean.

Nicholas Tufillaro is a research associate in the College of Earth, Ocean and Atmospheric Sciences. Between 1995 and 2008 he was a senior researcher and member of the technical staff at Hewlett-Packard/Agilent. He is the author of three books on nonlinear physics and more than 50 research articles in the fields of physics, electronic engineering, optics, and ocean sciences.