Synchrotron light sources create intense x-ray beams. Many synchrotron beamlines require an x-ray spot with an intensity profile as specified by the user. Moreover, many researchers are striving for x-ray spots of width <1μm. Bimorph mirrors, first tested at the European Synchrotron Radiation Facility (ESRF) in Grenoble, France,1, 2 are now increasingly used to focus x-rays at synchrotron beamlines to achieve these goals. Because Diamond Light Source (the UK's national synchrotron facility, in Oxfordshire) uses more bimorph mirrors than any other synchrotron, we have automated the optimization of these complex optics.

Bimorph mirrors for synchrotron beams are 500–1000mm long and ≈40mm wide. The x-rays travel along the mirrors' length and are reflected at shallow angles (several milliradians). Figure 1 shows a typical bimorph composed of two highly polished silicon or glass plates sandwiching oppositely polarized piezoelectric blocks.3 Voltages applied to the piezos bend the mirror along its length. Unlike mechanically bent mirrors, a bimorph with 8–32 piezos can correct low-frequency figure errors caused by polishing, beam-induced ‘heat bumps,’ or mechanical deformation due to gravity or clamping. The bimorph can also create non-Gaussian intensity profiles and correct distorted incident wavefronts. However, these uses demand quick, accurate measurements of the mirror's figure and rapid voltage optimization. 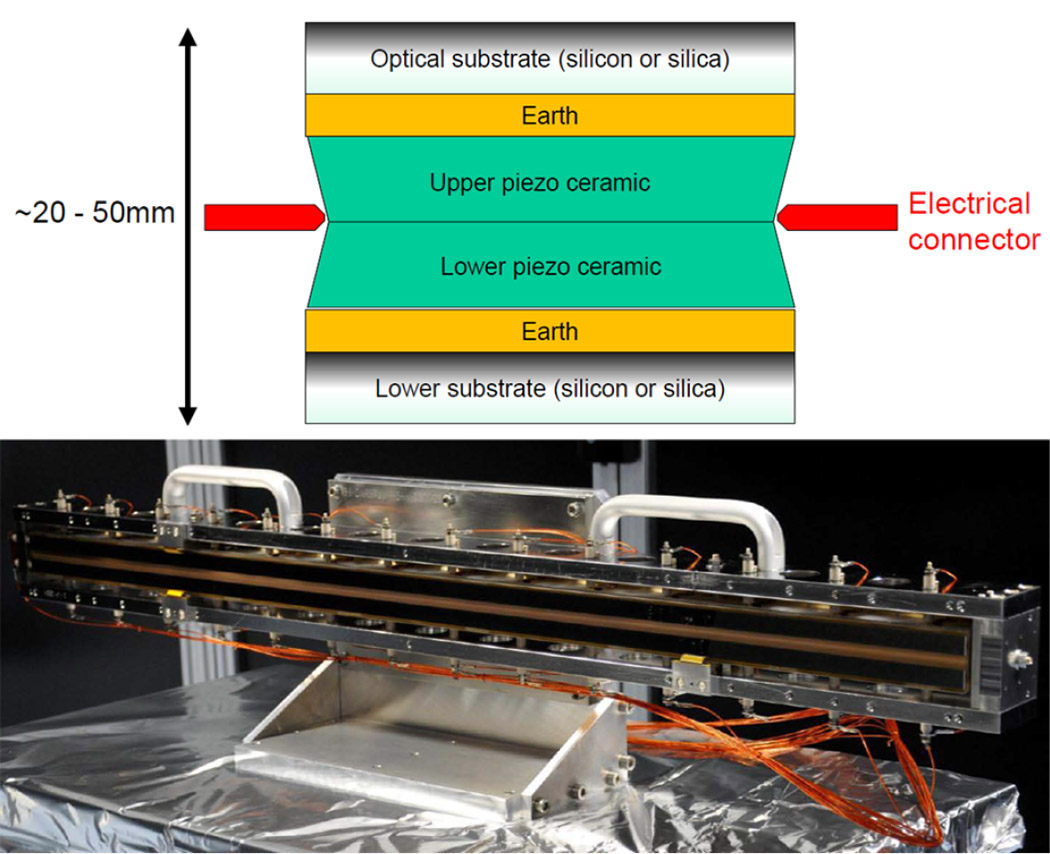 All mirrors at Diamond Light Source are assessed at two stages. Prior to beamline installation, they are inspected ‘ex situ’ under atmospheric conditions using visible light. Flaws and stresses that would degrade a mirror's performance can thus be discovered early. Then, after the mirror is installed on the beamline, ‘in situ’ x-ray scans are used to align and optimize it. The voltages that minimize the surface slope errors are calculated automatically.

For the ex situ inspections, each mirror is mounted inside a temperature-stabilized cleanroom, then inspected with state-of-the-art instruments such as the Diamond-NOM (nanometer optical metrology) profiler or the MiniFiz150 Fizeau interferometer. The Diamond-NOM can measure slope errors below 100nrad rms on mirrors up to 1500mm long.4 The MiniFiz150 is less sensitive but can rapidly record the 3D topography of a mirror's surface. Its short acquisition period (<1min) makes it ideal for characterizing twists induced by clamping or for observing dynamical effects.5

In situ scans use only equipment easily found on a beamline. A slit 10–20μm wide is scanned across the incident x-ray beam while the reflected beam is recorded by a simple x-ray imaging system consisting of a scintillator, a lens, and a CCD camera. The reflected beam's position directly yields the slope error. We have achieved accuracies comparable to those of the Diamond-NOM.6 Piezo response functions (PRFs) are measured by collecting a series of scans while sequentially incrementing the applied voltages. They show how each piezo influences the mirror's shape (see Figure 2). Jython scripts use the PRFs to calculate the voltages that minimize slope error. 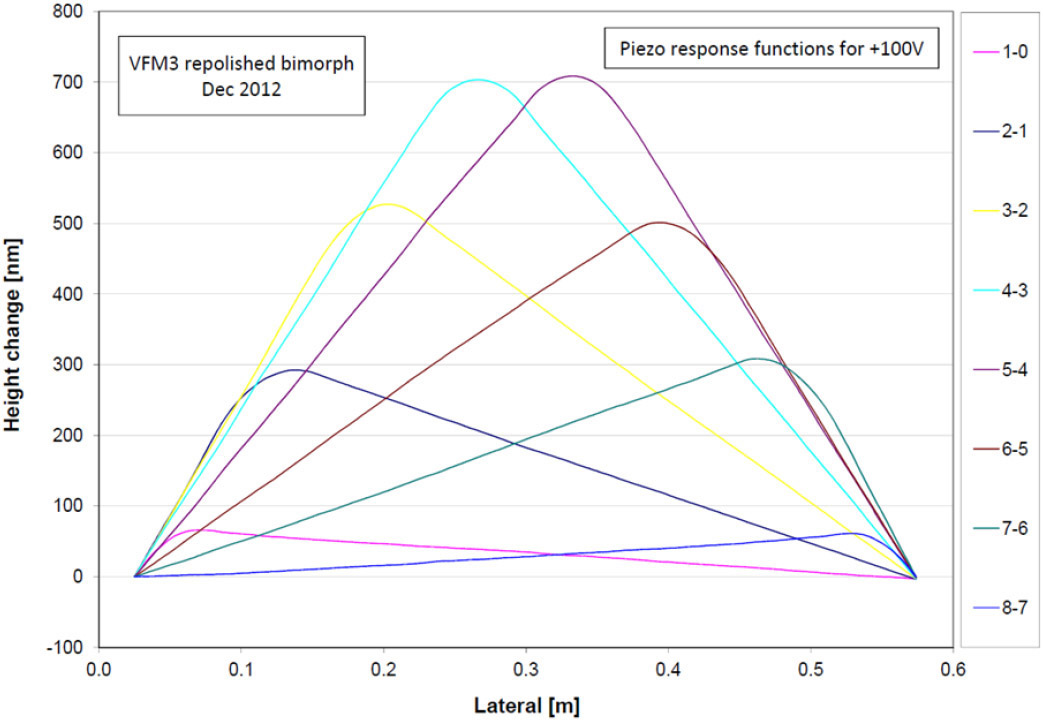 Older bimorph mirrors exhibited a problem in which their surfaces became corrugated with peaks and valleys up to 20μrad at the glued interfaces between the piezoelectric plates. This ‘junction effect’ substantially degrades the x-ray focal spot. It is believed that these corrugations develop early in the life of the mirror while the glue cures. Because the piezos cannot correct such sharp defects, we sent three pairs of bimorph mirrors for repolishing at Thales-SESO, France. After the repolishing, we achieved slope errors below 500nrad rms. Subsequent in situ tests confirmed that the junction effect does not recur.6 The resulting improvement in the focused beam profile is shown in Figure 3.

Figure 3. Images of focused beam before (left) and after (right) the repolishing of a bimorph mirror pair. FWHM: Full width at half-maximum.

At Diamond Light Source we have also developed the world's first ‘super-polished’ bimorph mirror, a novel 150mm-long, eight-piezo mirror manufactured by Thales-SESO and whose surface was polished by JTEC Corp., Japan, using elastic emission machining. Optimized voltage corrections found using the Diamond-NOM reduced the mirror's figure error to below 1nm rms and its slope error to 150nrad rms for a range of ellipses.5 This mirror routinely focuses x-ray beams to below 1μm. With care, we achieved a focus of 0.3μm for a focal length of 400mm.

In summary, we have developed techniques for producing bimorph mirrors capable of very high performance and have implemented automated systems for accurate inspection and optimization of such mirrors. In further work, a next-generation bimorph mirror with piezo elements cemented to the side faces has just been investigated both ex situ and in situ with encouraging results. Research into its long-term performance under beamline operation is ongoing. We are continuing to investigate the generation of uniform ‘top-hat’ x-ray beams, the rapid characterization of x-ray wavefronts using in situ grazing interferometry and speckle pattern analysis, and the performance of the next-generation bimorph mirror.

The authors thank all beamline teams at Diamond Light Source for their time and interest.

John P. Sutter is an x-ray optics scientist who has published papers on crystal monochromators and active mirrors.